There's a new option for coffee, breakfast and lunch Downtown, thanks to the opening of Red June Cafe. It's difficult to miss the cheerful cafe with its black and white awnings, painted windows and bright red door, all of which are indicative of the cafe's friendly neighborhood personality.

There’s a new option for coffee, breakfast and lunch Downtown, thanks to the opening of Red June Cafe at 773 N. Jefferson St. in the former East Town Chic Hair Boutique.

It’s difficult to miss the cheerful cafe with its black and white awnings, painted windows and bright red door, all of which are indicative of the cafe’s friendly neighborhood-focused personality.

Kimberly Blackburn, who operates the cafe with partner Hewerton Moreira, is originally from Fennimore, Wisconsin. She opened the first Red June Cafe in Chicago’s Bucktown neighborhood six years ago, where she established a friendly cafe with a cozy vibe. When the opportunity arose to bring another cafe to Milwaukee, Blackburn says she was excited to bring the concept closer to home.

"We’re so excited to be here in Milwaukee … here Downtown," she says. "And we’re really looking forward to getting to know the people in the neighborhood." 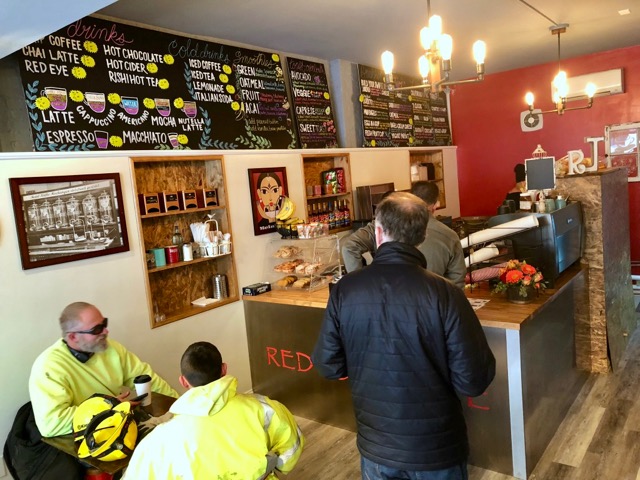 Blackburn says that Red June is really more of a "cafe with food, rather than a restaurant with coffee." And that’s led the cafe to use ingenuity with its menu offerings.

In fact, she says she’s particularly excited to introduce folks to the cafe’s breakfast sandwiches, which are made with scrambled eggs that are steamed with the wand from the espresso machine.

"They’re big and fluffy and delicious," she says, "and I don’t think anyone in the area is making them the way we do."

The cafe also offers a full complement of coffee and espresso drinks, along with hot chocolate, Rishi tea and iced beverages including lemonade and Italian soda. The shop’s coffee is sourced from Austrian roaster, Julius Meinl, a company Blackburn became enamoured of during travels to Europe. 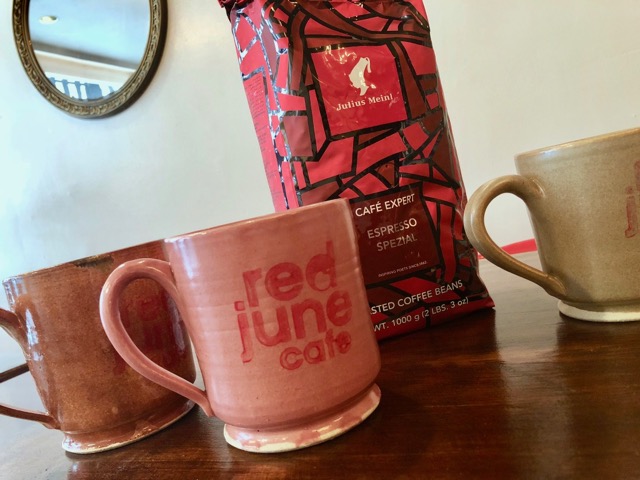 Yes, there are unicorns.

"The unicorn actually started with a bad Yelp review of the Chicago cafe," says Blackburn. "A very disgruntled woman wrote a review in which she suggested that we were only nice to ‘people with honey blood and unicorn smiles.’"

The review became a conversation piece among staff at the cafe and eventually made its way onto the cafe’s signature T-shirts. 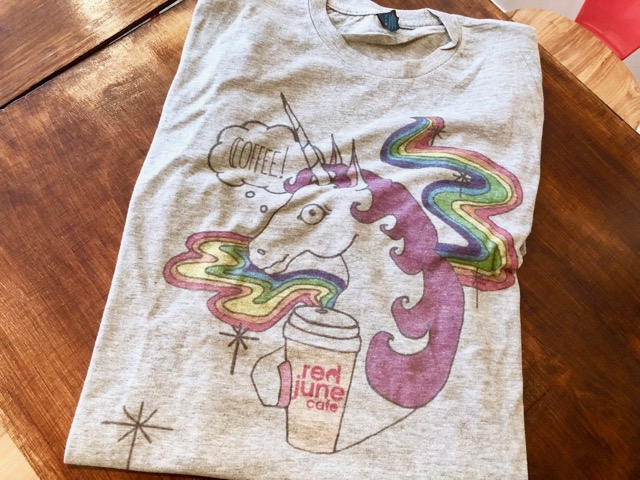 You can buy a unicorn tee a the shop ($15 for kids sizes, $20 for adults and $25 for baseball style). There’s also coffee for sale, as well as Red June Cafe mugs made by Chicago’s Penguin Pottery ($20 each, pictured above).

Red June is currently open Monday through Friday from 6:30 a.m. to 6 p.m. and Saturday and Sunday from 7 a.m. to 2 p.m.; hours may be extended if demand warrants.

The cafe will be closed Nov. 23-26 for the Thanksgiving holiday, but will resume service on Monday, Nov. 27 at 6 a.m.

You can also visit Red June Cafe at their kiosk inside the Rite-Hite Family YMCA at 9250 N. Green Bay Rd.