Milwaukee is awash in rumors about secret bowling alleys, hidden tunnels and former rooming houses. But in the case of Regano's Roman Coin, a family-owned bar at 1004 E. Brady St., it's true. Well, most of it.

Milwaukee is awash in rumors about secret bowling alleys, hidden tunnels and former rooming houses. But in the case of Regano’s Roman Coin, a family-owned bar at 1004 E. Brady St., it’s true. Well, most of it.

Run by Teri Regano, whose dad Joe bought the place in 1966 and renamed it, Roman Coin is the quintessential bar. Even in broad daylight, in midday, as sun streams through the windows that had once been long paneled over, folks pop in and out and everyone greets everyone else by name.

Regano clearly has a knack for this business and also has a passion for the history of the building, which has been a tavern from the day it opened in 1890. Of course, during prohibition the word "tavern" was replaced in the business names with the words "soft drinks." 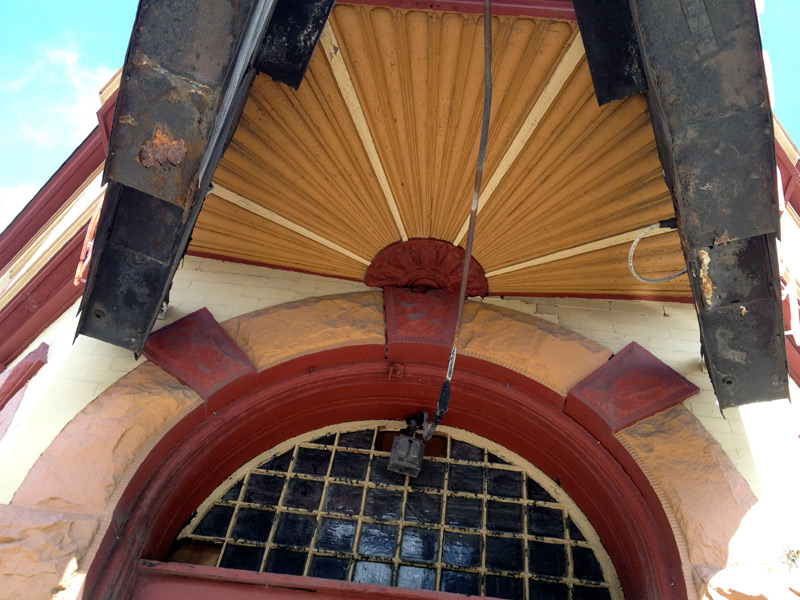 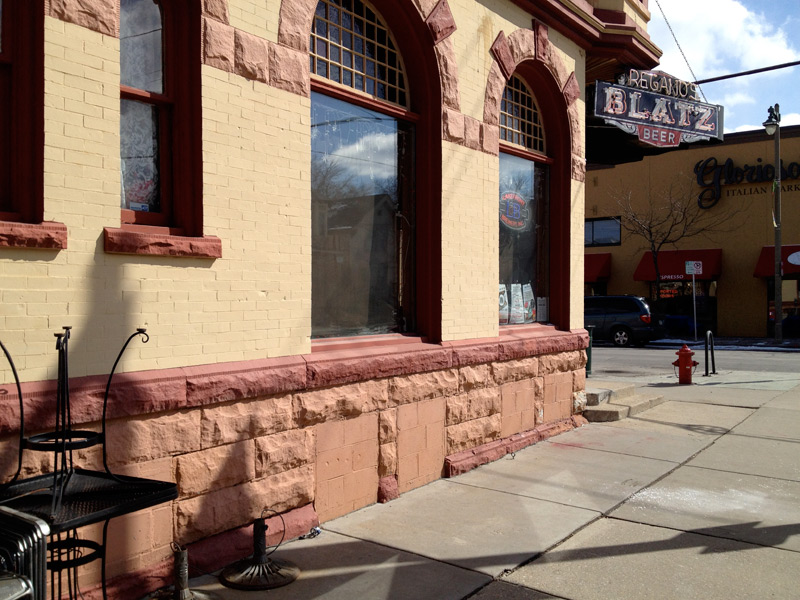 When Joe Regano bought the place, it had been called Suomi’s Inn for a few years. In his book on Brady Street, Frank Alioto has a 1957 photo of the bar when it was called the Happy Go Lucky Tavern.

But before anything else, it was a Pabst-owned "tied house," that is a tavern owned by a brewery as a means to sell its beer. Even today, a competing Schlitz tied house sits kitty corner across Brady Street from Regano’s.

By 1897, John J. Jordan was the saloon-keeper at the tavern, though it’s unclear whether or not he was there from the start. What is more clear is that the two-story Romanesque Revival corner bar was designed by Otto Strack. A beloved architect of Capt. Pabst, Strack designed The Pabst Theater and the Pabst World’s Fair pavilion that is now the entrance and gift shop of The Pabst Mansion.

(Pictured below is the 1894 Sanborn Fire Insurance map showing the saloon.) 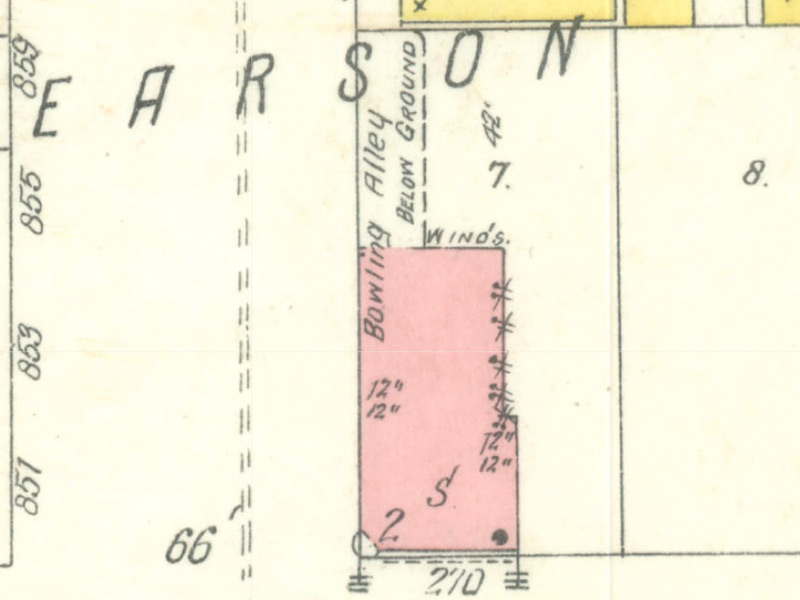 Research by a former employee found that Strack designed four Pabst tied houses, two of which were lost to fire. The other remaining one, he says, is the crenelated Gothic former Charles Jacobus saloon in Tosa Village that is now home to Ristorante Bartolotta.

Upstairs was a rooming house and the doors still have numbers on them. Nowadays, the space is reserved for storage for the bar.

Interestingly, there is a 1940s-era addition on the back, built atop what Regano says was a beer garden and she can show you were the exit out to the garden was at the back of the bar. But look outside and you’ll see that the 1890 foundation sits below the addition. Old photographs confirm that the rusticated stone foundation was there as a base for the beer garden. 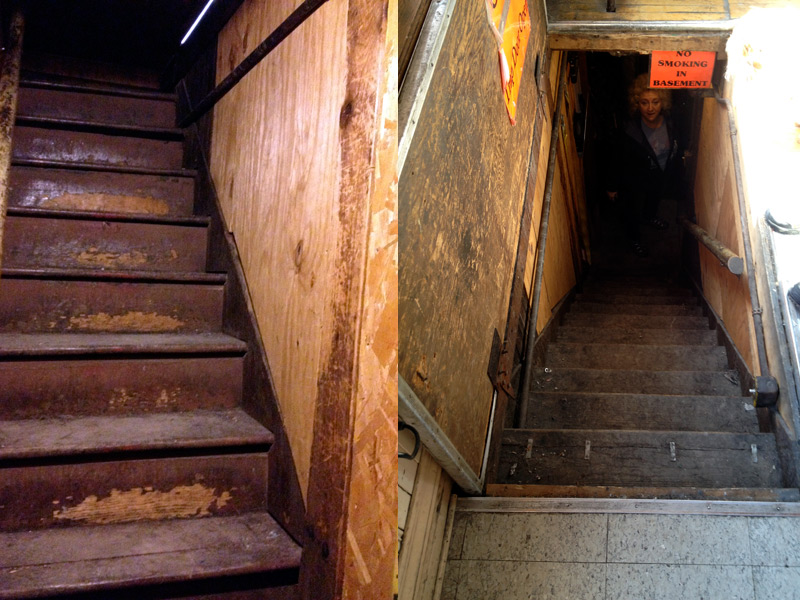 Regano has agreed to show me the basement and I can’t help but wonder how one gets down there. In old photos, it’s clear there was an exterior staircase down, on Astor Street, just left of the main entrance, but that’s been filled in.

Now you have to lift up a panel in the floor that covers what was once the interior staircase to the basement. The steps are original and at the bottom there are storage spaces and what looks like a coal scuttle beneath the main entry to the bar.

But these spaces are relatively small, and I don’t see any signs of a tunnel under Brady Street. Regano debunks this myth, saying in nearly 50 years in the bar, she’s never seen or heard of any tunnels leading out of the basement. 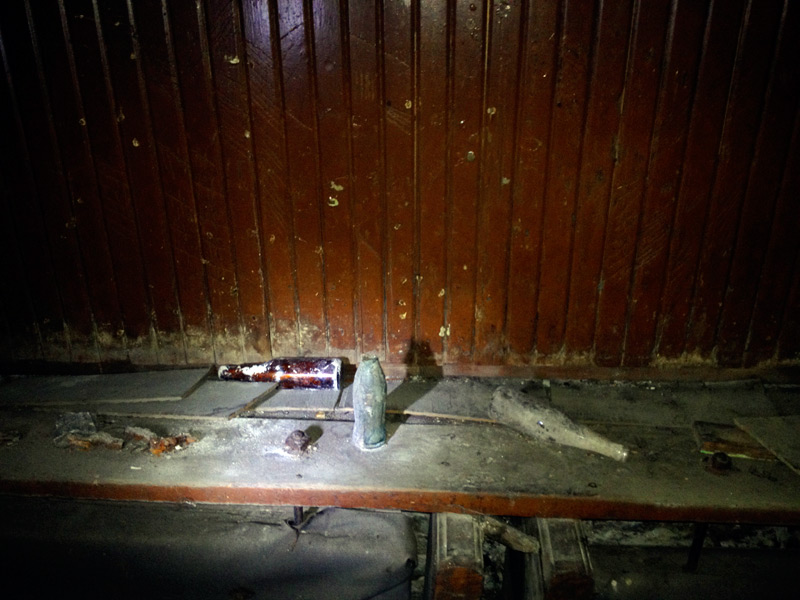 "The hardware store (further east on Brady) actually has a room that goes all the way under the street," she says. "I think Glorioso’s might, too. The old Glorioso’s. To my knowledge, a tunnel down here, that’s just a legend."

Amid the hum and buzz of compressors, Regano heads north in the basement and we arrive at the foot of a pair of bowling lanes, which are believed by some to be the oldest in the state. They're 18 years older than the alleys beneath Holler House, but those – unlike these – are still operational. 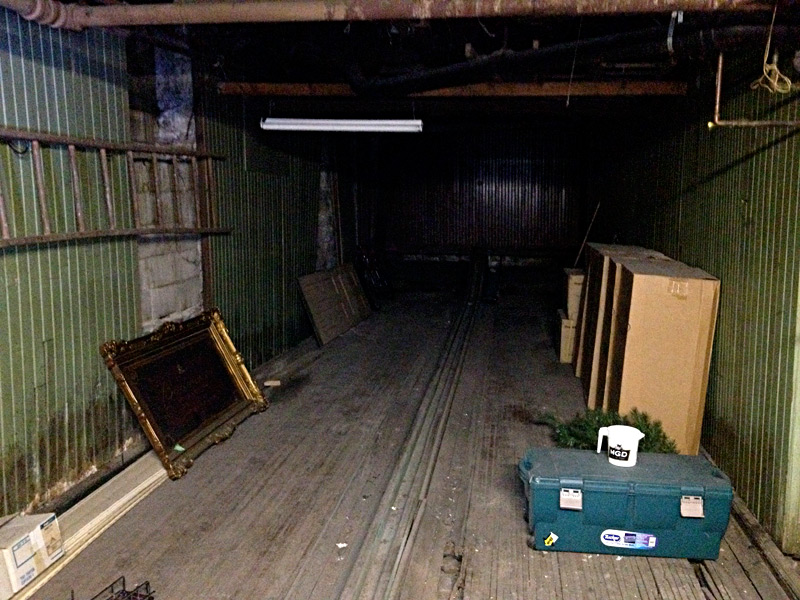 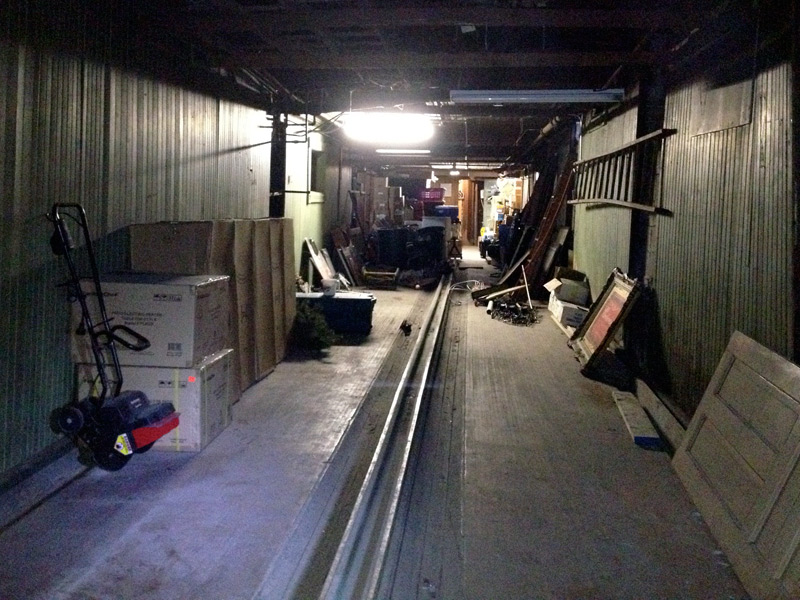 Of the two lanes, the left one is in pretty good shape, though I didn’t check it with a level, of course. It would need sanding and finishing, but that looks do-able. The ball-return rail survives between the lanes, as do the benches for the pin-setters. Even the marks showing pin placement are still there, under decades of dust.

But the right lane hasn’t fared quite as well.

"This was damage done from, I think, partially from plumbing," says Regano, leading us up the lanes with a flashlight. "When we have really bad rain, it seeps through."

But it’s hard to see these cool remnants of a time long gone and not imagine the sound of merriment, clinking glasses and the sounds of the ball hitting the wood, rolling down the lanes and the clatter of falling pins. 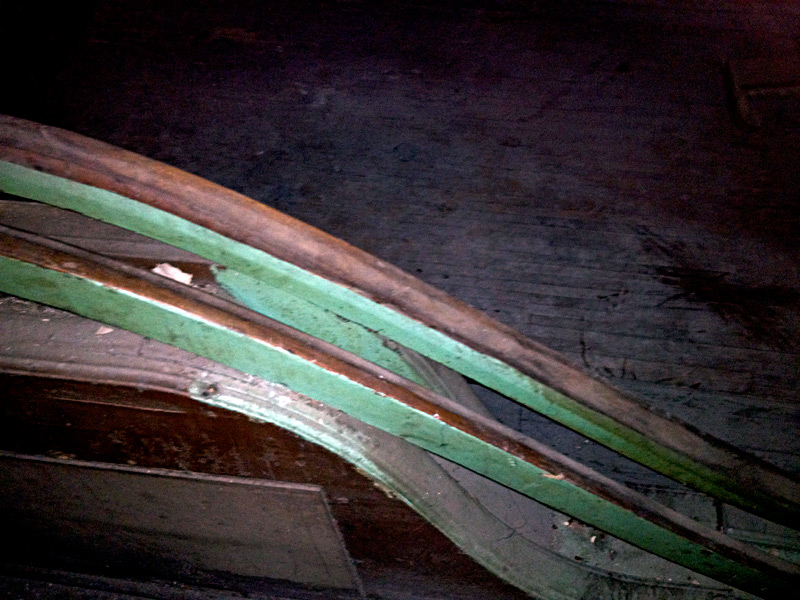 "What’s interesting to me is that there’s no place to walk," Regano notes. "The pin boys had to just walk down the lanes and you can see here the spots where they would set the pins. I think this was the bench where they would sit and they would just lean over and the pins would fall in there."

This is a basement, there’s no doubt. There are old doors leaning up against the walls. An old wooden ladder hangs on one wall. Below it sits a framed painting. There’s a walk-in cooler at the bottom of the stairs and all the accoutrements required to run a modern bar with multiple tap lines. Running alongside the lanes is a small room with decorative molding around the door and around a window opening out to the lanes. Inside there’s some super-old wallpaper. 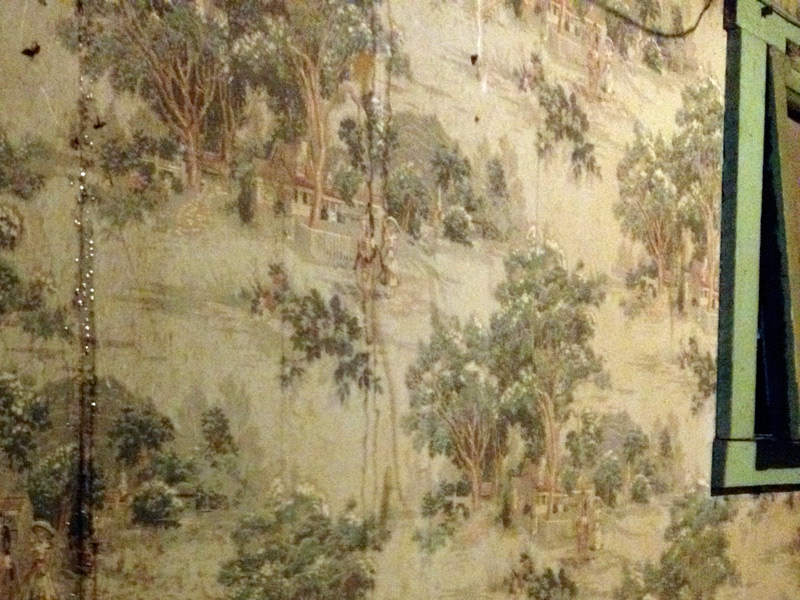 So, does Regano see these lanes reopening?

"Here’s the thing, when this was an operation, there was no walk-in cooler," she says. "There was maybe one or two taps upstairs on that lower end. The upper end didn’t even have a bar when my dad bought the place. Now, I have four compressors, the walk-in cooler. You know all of this stuff would have to go somewhere ... and it generates so much heat in the summertime. 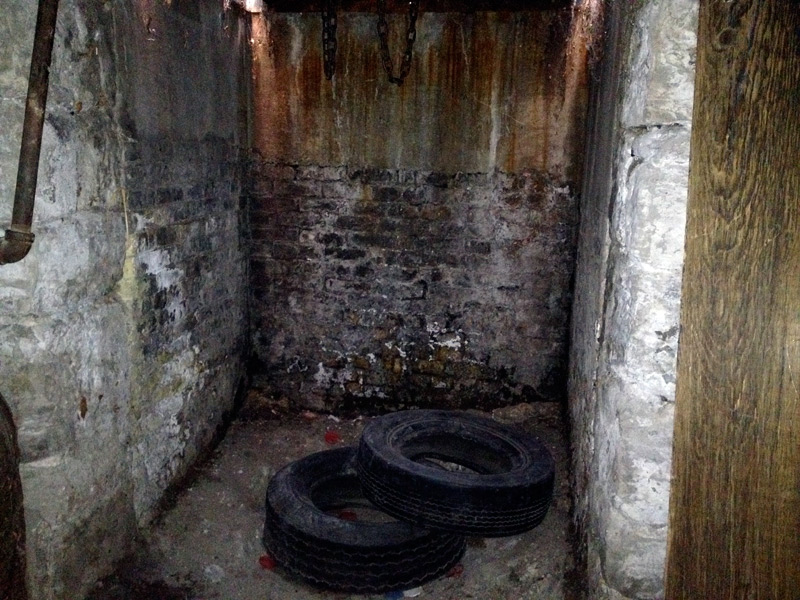 "The other issue is all of this steam pipes and electrical. These are older ones," she says pointing to dusty conduit connecting bulb-less light fixtures affixed to the ceiling. "These are probably dead, but who knows? I know I had these put in. The newer stuff you can tell but it’s almost like you have to go around with a tester to find out if there’s anything alive in there. The steam pipes sometimes have asbestos wrapped on them." 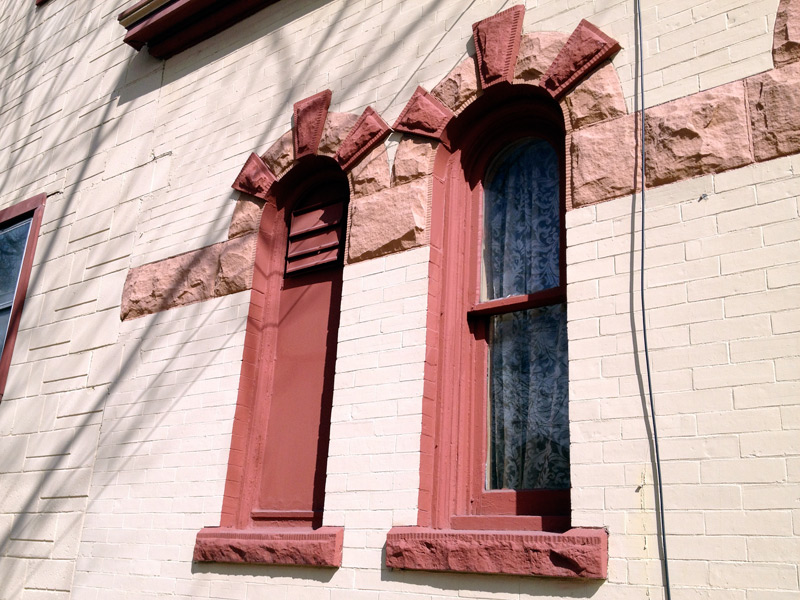 But, you can tell that she likes the idea at least a little.

Once you’ve seen the lanes, it’s hard not to understand why.