Get me out of Milwaukee?

WSJ.com joins the Milwaukee residency requirement debate by talking to Fire Captain Rich Matiszik who says he can't leave the city and move to the suburbs without quitting his job.

WSJ.com joins the Milwaukee residency requirement debate by talking to Fire Captain Rich Matiszik who says he can't leave the city and move to the suburbs without quitting his job.

The article, "Get me out of Milwaukee," ran this past weekend and is written by Joe Barrett (no relation to Milwaukee Mayor Tom Barrett).

What are your thoughts on requiring City employees to live within Milwaukee's borders?

And, as you're probably not accessing WSJ.com via google you may not be able to see the full article.  It's copied here:

MILWAUKEE—Rich Matiszik loves this city, with its lively festivals, soaring ballpark and miles of lakefront. But the struggling schools have him weighing a move to avoid private high-school tuition for his two kids.

But Mr. Matiszik can't leave Wisconsin's largest city without quitting his job under a local law in effect here since 1938. A proposal by Gov. Scott Walker to end such restrictions on municipal workers statewide is the latest battle in the Republican leader's drive to overhaul the relationship between government and its employees. 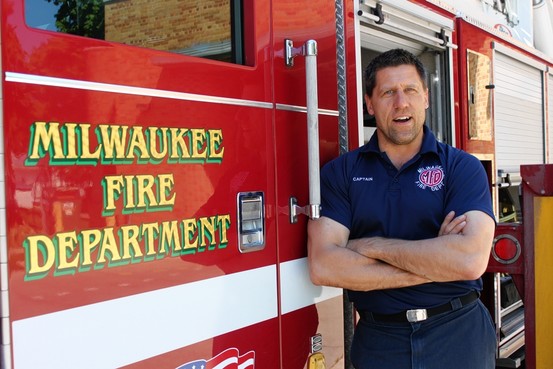 A long-standing local law prohibits Milwaukee Fire Captain Rich Matiszik from leaving the city and moving to the suburbs without quitting his job.

Battles over residency rules have popped up around the country for years, with police and firefighters often leading the charge to drop the rules and city leaders arguing that keeping the workers in the city helps the tax base and holds together neighborhoods.

But the fight playing out here in budget talks this month is particularly bitter, coming in the wake of Mr. Walker's other hard-fought proposals. Two years ago, he pushed through legislation that stripped public workers, except emergency personnel, of most collective bargaining rights. Protesters swarmed the capitol, some lawmakers briefly fled the state and Mr. Walker faced a costly recall election.

Mr. Walker survived the recall—helped in part by backing from Milwaukee's powerful police and fire unions. This year, he unveiled his residency proposal, arguing the rules aren't fair to workers or good for cities in the long run.

But some in the state see ulterior motives. "To me, it's a local-control issue," said Brian Landers, the Republican mayor of Wisconsin Dells, who fought for a change in the proposal that allows cities to keep emergency personnel from moving more than 15 miles away. "This is nothing more than a political favor to the police and fire unions of Milwaukee."

Mr. Walker said this argument is nonsense, noting that he has backed similar legislation since the 1990s. "In a great city, you need great schools, safe neighborhoods and a good environment for business and entrepreneurs," he said. "Those are the things that bring people in, not a wall that you put up on the city borders." 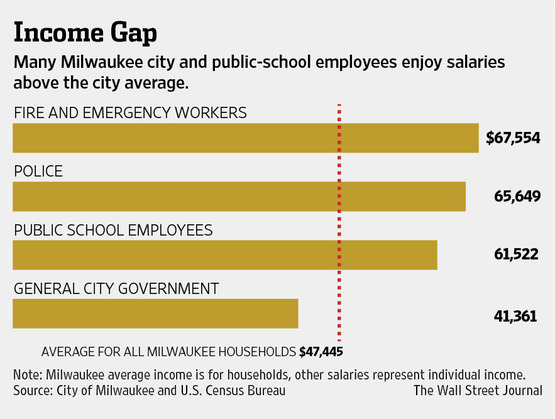 In Milwaukee, a city of just less than 600,000 that has lost nearly 20% of its population in recent decades and was hit hard by the housing crisis, the issue is particularly divisive. Mayor Tom Barrett, who opposed Mr. Walker in his 2010 election and 2012 recall, is doing everything he can to keep some 7,200 municipal workers and 6,200 teachers in the city, saying they are the backbone of many neighborhoods.

"We've made it clear for 75 years that if you work for the city, you get a good middle-class job and good health care and a good pension. In exchange, you have to be part of this community," Mr. Barrett said, adding that residency was a matter for bargaining, not for giving away.

Police and fire union leaders say the city has never been willing to discuss the issue, so they were forced to go to the state for relief.

Milwaukee is among a handful of big cities like Chicago, Boston and Philadelphia that still have residency rules, which were once popular across the U.S. but faded amid efforts to expand the labor pool, according to a report by the state's independent Legislative Fiscal Bureau.

Christina Plerhoples, a research associate with the Urban Institute who wrote a dissertation on the topic, found little effect on crime, fiscal stress or demographics in cities that dropped the rules. "The removal doesn't appear to be correlated with any of these negative effects," she said, possibly because cities tend to end the rules when things are going well.

In 2009, Cleveland lost a court battle against an Ohio ban on residency rules, but the worst fears haven't been realized. "We have not seen the mass exodus of employees, thankfully," said Maureen Harper, the city's spokeswoman, noting that 71.5% of workers still live in the city.

He calls it a "one-two punch," if the workers leave. Others worry too.

"I've always been able to say all the firefighters and cops live here," said real-estate agent Arlene Canning, whose office is on the southern edge of the city. "I'm not going to be able to say that anymore."

But Ki Choi, who owns a nearby dry cleaner, said fears are overblown. "If they move out, somebody is going to have to take that property. They can't pick up the house" and take it with them, he said.