The Bells of Milwaukee celebrates restoration of historic convent bells

The 19th century bells, named St. Ignatius and St. Catherine, currently reside at Convent Hill Gardens, 455 E. Ogden Ave., where they will be rededicated at 10:15 a.m. Wednesday in a free ceremony officiated by Rev. Tim Kitzke.

Years after the bells that once chimed atop the Notre Dame Convent and Motherhouse on Ogden Avenue struck a note with local writer Michael Horne, they are being rededicated this week after having been restored by a group Horne co-founded with Lakefront Brewery's Russ Klisch and The Pfister's Peter Mortensen.

The 19th century bells, named St. Ignatius and St. Catherine, currently reside at Convent Hill Gardens, 455 E. Ogden Ave., where they will be rededicated at 10:15 a.m. Wednesday, July 11, in a free ceremony officiated by Rev. Tim Kitzke, the Vicar General of Urban Ministry for the Archdiocese of Milwaukee.

The ceremony follows the annual meeting of The Housing Authority of the City of Milwaukee, which begins at 9 a.m. The public is welcome at the both events.

"I first encountered the Convent Hill bells decades ago when they were quite visible, due to the abundance of vacant land on the cleared Park East Freeway corridor," Horne told me via email, "and I would ring them from time to time. They seemed forlorn, however, and I always kept them in mind.

"Around 2015 Peter Mortensen, the concierge of The Pfister Hotel, and an avid historian, mentioned to Russ Klisch, the co-founder, president and owner of Lakefront Brewery, the old tradition that the bells of Milwaukee would ring in unison as a message of peace at midnight on New Year's (Eve)." 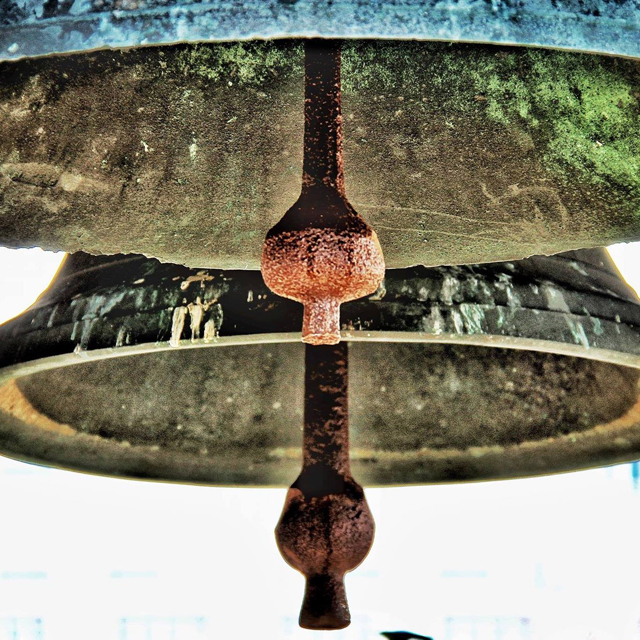 Klisch was enthusiastic and the three organized The Bells of Milwaukee, Inc., the following year and bells around have been ringing in the new years ever since.

"More and more bells, including the giant Solomon Juneau in City Hall, have joined the midnight chorus," Horne said. "However, many bells in the community are not in working order and must be restored."

The Bells of Milwaukee hopes to undertake some of the restoration work and this week’s event is a watershed moment, he said.

"The restoration of the Convent Hill Bells serves as a signature project, since they are on public property, are quite accessible, attractive, and may be rung (by anyone)," said Horne.

"With this project, we hope to raise awareness of the bells of Milwaukee, and to raise funds to document, inventory, record, photograph and otherwise make accessible these community treasures."

Future activities by The Bells of Milwaukee will be announced at the ceremony, Horne said.

The two bells were once a key part of the convent that filled an entire city block and, said Horne, was for a time the largest building in the city. It was demolished in 1960.

Cast in St. Louis in 1863, Saint Ignatius is among the oldest surviving bells in Milwaukee. Saint Catherine, meanwhile, was cast around 1883 by Milwaukee’s Centennial Bell Foundry, which also made the bell that hangs in the belfry at City Hall.

These two historic bells – owned by the Housing Authority of the City of Milwaukee, which, Horne said, "contributed labor and materials for the removal and return of the bells, as well as work on their attractive belfry, which is accessible to the public" – were restored by Wisconsin’s Lee Manufacturing Co. thanks to grants from The Argosy Foundation, The City of Milwaukee Arts Board, Herbert H. Kohl Philanthropies, Inc., and John Shannon & Jan Serr.