"Tea is so much more than a mug of hot water," says Kristen Lorenz, director of education and culinary development for Milwaukee's Rishi Tea. Coming up with inspired ways to use tea is at the heart of Lorenz's job, which is rapidly advancing Rishi Tea's reputation for culinary innovation.

"Tea is so much more than a mug of hot water," says Kristen Lorenz, director of education and culinary development for Milwaukee’s Rishi Tea. "It used to be that tea was simply about sipping a hot beverage. But I’m here to open windows to the all the capabilities of tea (and botanicals) in all areas of a menu: savory, sweet, cocktails, etc. In my mind there is no limit to the possibilities."

In fact, coming up with inspired ways to use tea is at the heart of Lorenz’s job, which is rapidly advancing Rishi Tea’s reputation for culinary innovation.

"You just don’t see tea presented in a culinary way everywhere," says Lorenz, "But I’m here to open windows for people who might not already have an interest in tea."

From Singapore to Milwaukee

Originally from Chicago, Lorenz spent much of her career working in fine dining, but is no stranger to the beverage landscape. She’s achieved certification as both a level one sommelier and level two sake expert, both of which she says have opened her eyes to the complementary nature of beverages in the culinary landscape.

After earning her degree at the French Culinary Institute in New York (now the International Culinary Center), Lorenz says she followed her passion for Asian cuisine to Singapore, where she continued her education at the At-Sunrice GlobalChef Academy and subsequently accepted a position working at the Four Seasons Hotel in Singapore. 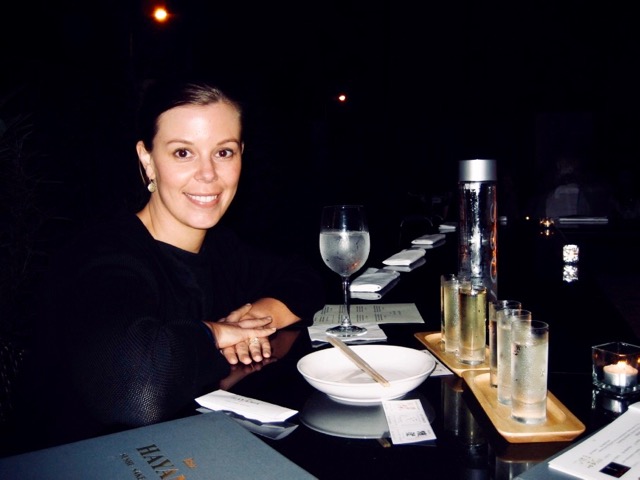 When she moved back to the U.S., she gleaned further experience at Tru in Chicago. She also worked as a private chef in New York and as an instructor at the Calphalon Culinary Center. From there, she launched a culinary services company that specialized in culinary education, innovation and design. In early 2016, she says she left her business to pursue the opportunity at Rishi Tea.

"It was a great fit," she says. "It gave me the chance to really think innovatively about tea and alternative uses for tea. In the end, it opened up a whole new world for me in terms of recipe development."

On a day to day basis, Lorenz says her job varies greatly. She might be found in the kitchen testing new recipes, at the Rishi headquarters training new employees and sales staff or in the field talking with Rishi customers about tea.

"The creative process can vary each time I step in the kitchen," she says. "Sometimes my focus is very customer-specific, while other times it’s simply more experimental – using it in a way I haven’t thought of or tried before.  When such experiments turn out to be successful— that’s when all the ideas and application possibilities begin to snowball and I can then customize the fine details (the flavors, the preparation, the vessel, the assembly, etc) where it’s relevant and appealing to a particular customer set."

Lorenz notes that a single creation is unlikely to appeal to every type of Rishi customer; however, at minimum, it can serve as inspiration, as well as a way to position Rishi at the forefront of innovation. It's also a great opportunity to showcase tea’s versatility and empower others to think about using tea in very different ways.

"I spend a lot of time getting to know how a specific product behaves," she says. "It’s about really understanding the flavor profile, how it interacts with other ingredients and how the flavor is extracted."

From there, she says, she thinks about how that flavor profile can be applied to a specific food or beverage.

"In some ways, it’s about creating inspiration for people, and giving them a new way of looking at a product that so many people take for granted."

"Since we’re familiar with tea as a beverage, new ideas come naturally," notes Lorenz. "But tea in food, or even as food, that is something you don’t see often in America."

Tea, for the most part, is not edible. Many tea leaves are fibrous and difficult to digest, and there's good reason to avoid eating tea that's not been carefully sourced.

The benefits of tea are derived in large part from the tea leaves' water soluble components, including antioxidants, caffeine and the amino acid theanine. Among the non-soluble components left in the tea leaves you can often find heavy metals gleaned from contaminated soil or chemicals from polluted rain or run-off.


Certified organic tea will eliminate the risk of contamination by fertilizers, herbicides and pesticides. But, caution is still advised. If you choose to seek out edible tea, do your research and source your tea from a reputable vendor. In Rishi's case, they go above and beyond to ensure that their product is free from chemicals, spending upwards of six figures each year on additional testing for their teas and botanicals. 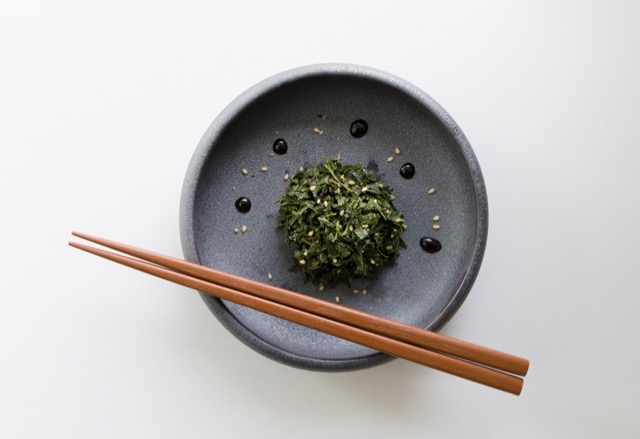 Lorenz says that, of all tea varieties, organic Japanese green tea is often the best candidate for culinary applications that utilize whole tea leaves. That's thanks to both the care with which it is grown and processed.

"Not every tea leaf is edible," Lorenz cautions when telling me about one of her latest projects, a salad made with steeped Gyokuro Japanese tea leaves. "In fact the vast majority are not. There are variations in processing and most teas just aren’t fit to eat. However, Japanese teas tend to be very pristine. And, when it comes to keeping the tea from oxidizing, Gyokuro is steamed, so that keeps things very green and tender."

Lorenz said she started out with the intention of cold-brewing the tea to serve alongside the tea leaf salad, but the leaves didn’t get tender enough. So, she brewed the leaves using traditional methods instead.

"Japanese cuisine is very much about showcasing high quality ingredients without a lot of manipulation," she says, "In this case, the tea leaves have been steeped once and tossed with sesame oil, mirin, rice wine vinegar and garnished with sweetened soy."

"I’m always thinking of liquids that would benefit from more flavor," says Lorenz. "And when I find combinations that work, it opens up so many possibilities. My job revolves around introducing people to new things, providing them inspiration and techniques that are well suited to pulling the most flavor out of a particular tea. And in some cases, it’s about showing them that a tea or botanical blend can take the place of a variety of other ingredients."

In one such case, Lorenz took a Moroccan couscous recipe that had been in her repertoire for years and revamped it using tea. 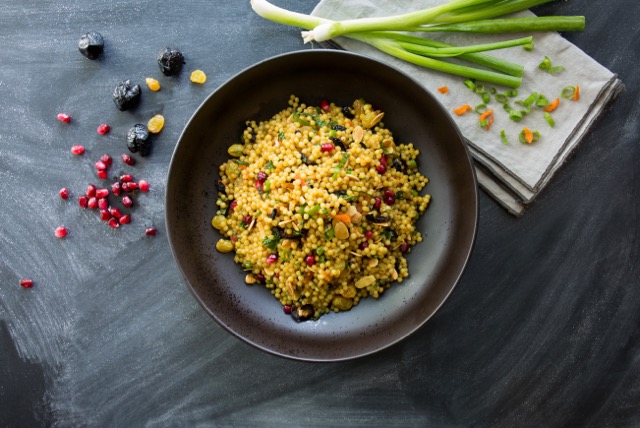 "In the past I’d often put a bit of curry paste into my stock," she says. "But, then I thought … can the turmeric ginger tea stand in for a curry? As it turns out, it can. And it’s so unbelievably simple."

Lorenz says it’s simply a matter of heating up chicken or vegetable stock, adding turmeric ginger tea and steeping until the ideal level of flavor is achieved.

"In the end, it’s infused with the warming spiciness from the ginger, an inherent sweetness from the licorice root and the really earthy flavor from the turmeric," she says. "The beauty of tea here is that you can build such great complexity of flavor in a single step."

"A lot of the hot chocolate out there is just crap," Lorenz says, noting that she’s always been a fan of drinking chocolate (also called sipping chocolate), a trend she’s seeing more and more in restaurants and cafes. "Using whole chocolate provides richness in both body and flavor, and it results in a more sophisticated high quality experience."

When thinking about incorporating tea into the hot chocolate experience, she says her key question became: what type of tea can stand up to high quality dark or white chocolate? 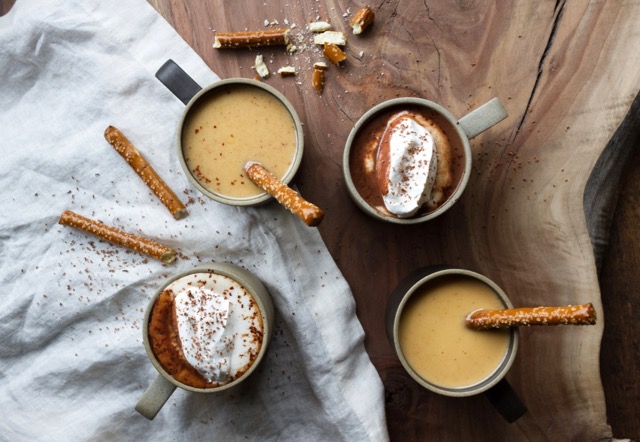 To get a balanced flavor, she infused whole milk with chai, and then played with the addition of other ingredients, settling on dark chocolate, orange zest and honey. She also created a variation includes white chocolate with maple syrup and chili powder.

"Masala chai is the mother ship of the chai world," she says. "And the fact that it worked with both the flavors of white and dark chocolate really showcases the versatility of the tea itself."

Lorenz says her job presents the perfect combination of challenging herself to innovate and having fun playing with new flavors.

"Joshua [Kaiser, founder and owner of Rishi] has always been very forward thinking, and Rishi has always been at the forefront of innovation and ideation," she says. "So focusing on the culinary aspect only makes sense. Dishes that incorporate tea are often gorgeous to look at. They’re also really exciting to the palate in terms of flavors and textures. Even more, the health and wellness benefits that come with enjoying tea regularly is icing on the cake."

5 reasons to try the new matcha latte at Colectivo

Windowbox is a spot of tea on East Side