Back in rock and roll's infancy, travelling revue shows were common not to mention a great bargain for fans. Best known as a Stray Cat, Slim Jim Phantom's Rockabilly Circus brings a modern retro update to the Northern Lights Theater on Friday, March 27.

Back in rock and roll’s infancy, travelling revue shows were common not to mention a great bargain for fans. Best known as a Stray Cat, Slim Jim Phantom's Rockabilly Circus brings a modern retro update to the Northern Lights Theater on Friday, March 27.

Performers include Wanda Jackson, the all time queen of rockabilly, whose career began in the days when she played shows with Elvis Presley and continues to this day, including her 2009 album produced by Jack White.

Jackson’s contemporary, Sonny Burgess, and his band the Pacers recorded for Memphis’ Sun Records, and at their best, they sounded like a hot rod cornering too fast on a gravel curve. Their manic intensity set an impossible standard until punk rock artists like The Cramps came along. 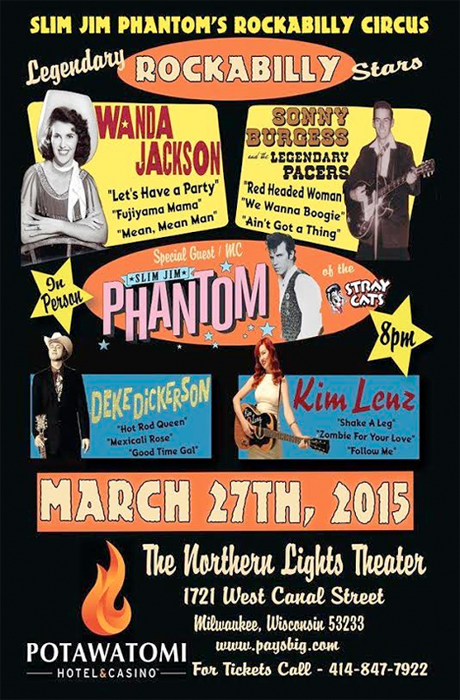 Along with these legends, Phantom adds Deke Dickerson – whose appreciation for Americana, oddball rock and roll culture is only matched by his musical finesse – and Kim Lenz with her intense brand of rockabilly.

"It’s still a thrill for me to know and work with these original rock and roll artists," Jim said. "I’m getting to know Sonny and I’ve been friendly with Wanda for years; they’re true characters!"

"Before the stray cats brought it into the mainstream, there was no real rockabilly scene to speak of; in Europe, there was a teddy boy scene, but in the USA and for us in New York, there was nothing," he continued.

"I liked punk rock and some of the stuff going on, but we saw it as a challenge to bring rockabilly to the masses. We loved it so much, and we're happy to be the messengers. It launched 1,000 ships and I’m proud of that."

"You boys made a good sound, too!" Sonny said of the Stray Cats.  He also cites Dave Alvinof the Blasters as another guitar player who caught his ear.

"I felt the show was wilder, not so much the music," he says of the Pacers early days. "I always wanted to play the guitar and wanted to get the sound of Scotty Moore (Elvis’ guitar player) or Ernest Tubb and mix it with the blues style of Jimmy Reed."

It has been written that rockabilly shall inherit the earth. In the Stray Cats, Jim was a custodian to this particularly American-style music. Today he is part of the music’s third act, playing alongside the folks who inspired him. He recalls his band’s early days.

"We were so hungry to play this music and travel that we embraced the audience in Europe right away. I was thrilled that we were so loved by those original fans; what could be bad about being 19 years and being the toast of London and Paris and Amsterdam? It was a blast!"