This morning we posted a look back at some of Milwaukee's dead and gone Downtown rock and roll clubs. Here, Bobby Tanzilo recalls a few of them.

This morning I posted a look back at some of Milwaukee's dead and gone Downtown rock and roll clubs. I never had the chance to visit some of them, which pre-dated not only my time in Milwaukee, but, in some cases, also my birth.

The effect of having missed some of these is one of a mysterious, almost difficult to imagine time in the city, which has changed so much since the likes of The Scene, The Attic and The Penthouse existed. Not only are the clubs long gone but the buildings they occupied also vanished decades ago. The views you see in the other post – like the one at 5th and Wisconsin with a direct line of sight up to the Arena – simply don't exist anymore.

And the thought of Jimi Hendrix on the streets of Downtown, frankly, seems surreal.

But I got here in the early '80s, which despite what you might read elsewhere, was, in fact, an exciting time in Milwaukee music. The first wave of punk and new wave bands like The Haskels was wrapping up and the hardcore scene was on the rise. You could also still see some fine transitional era bands like The Oil Tasters, Einstein's Riceboys, The Honest Disgrace and Modern Values.

The Palms was still open and new places, like The Underground, Cafe Voltaire and Irene J's, were beginning to emerge.

One of my earliest gigs in Milwaukee was at Tony Selig's subterranean Underground and I remember Tony asking my age. When I told him I was underage, he told me just to head unobtrusively toward the back exit if I saw any uniforms descending the stairs.

Other than the crowds and the low ceilings, my abiding memory of the original Underground is having patrons slip past my drum kit to get to the bathroom (and having to do the same when others were playing). 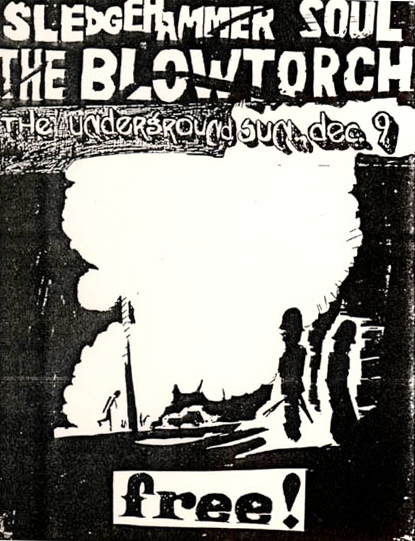 When he moved over to the old Papagaio's, everything was topsy turvy. Here the ceilings soared, the room was huge and the ample stage loomed perhaps five feet above the dancefloor.

We made friends with The Jazz Butcher and The Neighborhoods here and I vividly remember hanging outside in the van in the parking lot with Del Amitri as they prepared to open for Die Kreuzen (thanks guys!) on the same night that most everyone in town eager to see them was up the street watching The Smiths at the PAC. I also have an enduring memory of seeing Henry Rollins at a table (we were dropping off posters or something and he was playing that night) writing furiously in a notebook in the club one afternoon.

I won't lie to you, I did NOT see Nirvana at The Unicorn, nor do I really regret it (gasp!). Instead I saw a slew of local bands and some national and international acts, memories of whose shows I've long since consigned to the dustbin.

It's funny what we remember about things. After a dozen or so gigs at The Toad, my main memory is of admiring a beautiful Rickenbacker owned by the guitarist from another band on the bill. When I offered a compliment, I was rebuffed. "She does not like strangers," I was told, in a serious tone. What could I do but chuckle at the pomposity and keep moving?

The C-Club in the basement of the Wisconsin Hotel hosted some steamy reggae shows (upstairs was a cafe that had gigs, too, including a stellar residency by latin jazz masters La Chazz – but that was a whole other thing).

Burning Spear's trance-like performance was a standout (was that a tie made out of paper that bassist Anthony Bradshaw was sporting?!).

Chatting with a young Squiddly Cole, here with Michael Rose, was another highlight. He'd go on to be one of reggae's premier drummers.

But it was also the scene of Paul Finger's stompin' ska record spins, which, if they couldn't match Gaz's Rockin' Blues in Soho during the same era in terms of crowds (to be expected in a London/Milwaukee comparison), they surely equaled it in passion, sweat and enthusiasm.

The C-Club is also the sole venue where the opening act for my band, The Blowtorch, was a troupe of topless dancers. We, in turn, were opening for the Squares. I fear that might have made us the lowlight of the night.

That leaves Yano's, where even at 18 I felt a little like an old dude. But I loved it. There was no bar, which was fine with me. I will still walking that straight edge. The bands were exciting, the crowd was there for the music and the camaraderie. It burned brightly and briefly.

I can't speak from experience, but I suspect – with no disrespect to previous or following generations – that we kindled a fury and fire in the '80s in Downtown Milwaukee that few others could equal.