Forty years ago, The Oriental Theatre hosted the first screening of "The Rocky Horror Picture Show" on Jan. 7, 1978. On Saturday, Jan. 13 the theater will host an anniversary show, featuring live actors, including Nick Iannone who plays "Riff Raff."

Forty years ago, The Oriental Theatre hosted the first screening of "The Rocky Horror Picture Show" on Jan. 7, 1978. The theater has continued to show the cult classic every Saturday night at midnight since then and now holds the record for the longest, continuously-running show in the United States.

On Saturday, Jan. 13 the Rocky Horror Picture Show’s 40th anniversary show takes place at midnight (actually 11:50 p.m. is the exact start time.) Tickets are $10 each. The evening will also include "virgin games," prizes and a few special guests.

On the second Saturday of every month, actors perform the show live, in front of the movie screen and in the audience, simultaneously with the film actors. Originally called the Celluloid Jam, the group now goes under the name Sensual Daydreams.

Sensual Daydreams will perform during the anniversary show.

OnMilwaukee recently caught up with Nick Iannone, who plays "Riff Raff," one of the main characters in the show.

"Rocky Horror is for everyone to enjoy," says Iannone. "If there's something out there that you want to do, or someone who you want to be, follow (the film's) advice: don't dream it, be it."

OnMilwaukee: How long have you been in Sensual Daydreams?

Nick Iannone: I wanna say spring of 2012, though I can never remember exactly which month I joined. I've been attending shows at the Oriental on and off since September 2009, though, so it feels like it's been longer than it actually has. Oddly enough, I'm at about the middle point when it comes to cast duration; there are still five or six members who have been on cast far longer than I have, with our longest-running current cast member having been on cast for at least two decades.

As a side note, our theater actually holds the Guinness World Record for the world's longest-running continuous showing of "Rocky Horror," barely beating out theaters in Germany and New York City, so we still occasionally get messages or visits from cast and audience members from long, long ago. 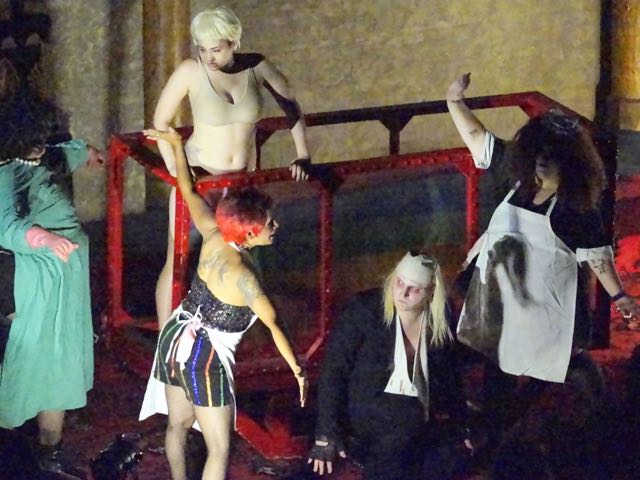 Did you always play Riff Raff?

Actually, I've only been playing Riff Raff since our previous director, Jerry Dunk, decided to leave our cast a few years ago and handed the role to me. I've always really liked the character, and I had actually dressed up as him at for the MSOE Halloween dance in 2010, although my costume was far worse than the one I have now.

To answer your other question, though, I've played Transylvanian #1 – all newer cast members play as the Transylvanians when they join. I've done small props, large props, spotlight and I've done Trixie, Rocky and Janet for our April Fool's switch shows throughout the years.

What about Riff Raff do you connect with?

I mean personally, I like Riff Raff; he's kind of the guy who gets kicked around a lot, but when it comes down to it, he's the most badass of all the characters, overthrowing Frank and taking the whole house back to the planet of Transsexual in the galaxy of Transylvania.

That being said, I was definitely a Brad growing up, and I've always really enjoyed, if been a little jealous of, Frank N Furter's flamboyance and glamour. Columbia feels like a fellow nerdy cosplayer, who like me got swept up in something that ended up consuming her completely, and Janet even helped me realize a thing or two about myself, as I'm sure others will understand.

I've seen it about five times a year between 2009 and 2012, plus as an audience member for Velvet Darkness at Geek.Kon in Madison once, at the Music Box Theater in Chicago once, at the Racine Theater Guild once, and twice at the Art Theater in Long Beach, California.

After I joined in 2012, it's been every single month, twice in October, and excluding the one February show when our furnace broke. And countless times for friends and loved ones, and just to practice in front of the DVD player at home. Also, throw in a couple of full rehearsals before big shows, and a few pieces at the Milwaukee Pride Parade, and I think that's all of it.

In other words, I've long since lost count.

How many people are in the group? How often does the group perform?

The cast of Sensual Daydreams goes through cycles where we have more or less people. Right now, we have 19 official cast members, and we're still looking for more! (Those who are interested can visit the Sensual Daydreams Facebook group and request an application.) We perform once a month, on the second Saturday of every month (except this February, when our Valentine's Day Lingerie Show will be on the 17th), plus an additional show in October for Halloween. We also march every year in the Milwaukee Pride Parade. 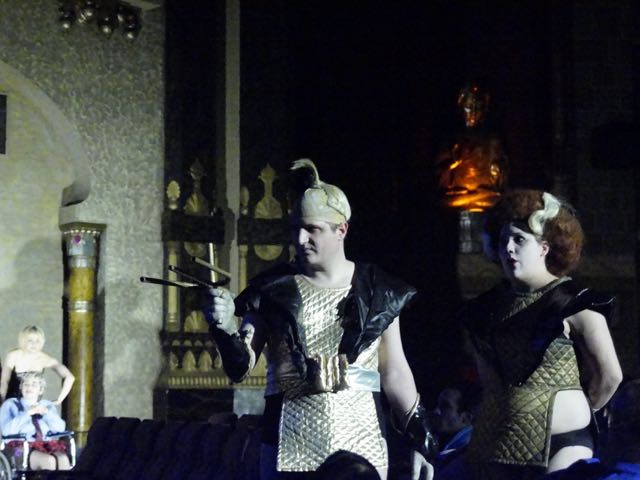 How do you practice for this role initially? Do you still practice before a show?

Well, for the longest time in "Rocky" history, the only way to practice was to attend the show or order a bootleg tape (or if you're extremely well-connected, a theatrical film reel) from someone in the community, but as the years have gone on and technology has advanced, we've been blessed with VHS tapes, and now DVDs and Blu-Rays, which we use to plot out blocking, practice poses and facial expressions, and build up our costume pieces from scratch.

I originally studied under Jerry, as I mentioned earlier, who taught me most of what he knew in terms of blocking and cues from decades of practice and character analysis, and I've added my own goofy flair to the role since then. I still practice from time to time, loading up the DVD and watching for subtle movements I may have missed, as well as practicing other roles in case I land them for Switch Show, and I always practice before bigger shows as well.

Can people still bring props to the theater?

Yes! We encourage our unconventional conventionalists to bring their own props (excluding hot dogs or any food items other than rice or toast, per the theater's request) but we also sell our own Survival Kits to fund the cast's proceedings. At $3 (or $5 for two kits), you get toast, rice, a party hat and noisemaker, playing cards, balloons, toilet paper and newspaper. We also sell a variety of other things, including handmade pins, individual rice balls, bumper stickers, T-shirts, glow sticks and various other goodies for the dastardly delight of our audience.

What about the film is still relevant?

I think "Rocky" came out at a time when people were craving something new from their entertainment, where they could get involved and have just as much fun participating as the people on stage were having in putting on their show. It's about giving in to your dirtiest desires, and joining one great big unholy family that spans literal generations.

As for why it's relevant, especially now in 2018 with all the heavily-politicized debate about sex, gender and sexuality in America, it gives us a community where we can come and feel free to have fun and be ourselves, whatever we identify as or whoever we love.

Plus, anything that's been going for this long survives on the dedication of its longtime fans, a steady stream of nostalgia, and the reminder of a time when we could all just kick off our work shoes, strap on our high heels, and go do the Time Warp again.

Hulu's "Happiest Season" is more than a lesbian holiday rom-com