Rotisserie chickens have become the unsung heroes of quick weeknight meals. But how good do they really taste? And how much do they vary from store to store? Lori Fredrich put chickens from some of the most popular grocers to the test, going in depth to provide you the most comprehensive information possible about each.

Since being introduced as a supermarket staple in the 1990s, rotisserie chickens have become the unsung heroes of quick weeknight meals. But how good do they really taste? And how much do they vary from store to store?

Like many people, I purchase rotisserie chickens on a fairly regular basis. Usually I pick them up at whatever store is most convenient, and I’ve always presumed (errantly, it turns out) that they’re all pretty much the same, barring variations in price.

But a few weeks ago, I decided to put chickens from some of the area's most popular grocers to the test, going in depth to provide you the most comprehensive information possible about each.

During the taste test I took note of their appearance, flavor and texture (breast meat, thigh and skin). But that’s not all. I also weighed each chicken (sans packaging) to see which chickens offered the best bang-for-your-buck. I noted the list of ingredients on each package, because it’s good to know what’s in the food you eat. Lastly, I gave each chicken a rating based on its perceived saltiness, using a scale of 1 to 5 (with 5 being the saltiest).

Here are the results, with birds ranked from worst to best. 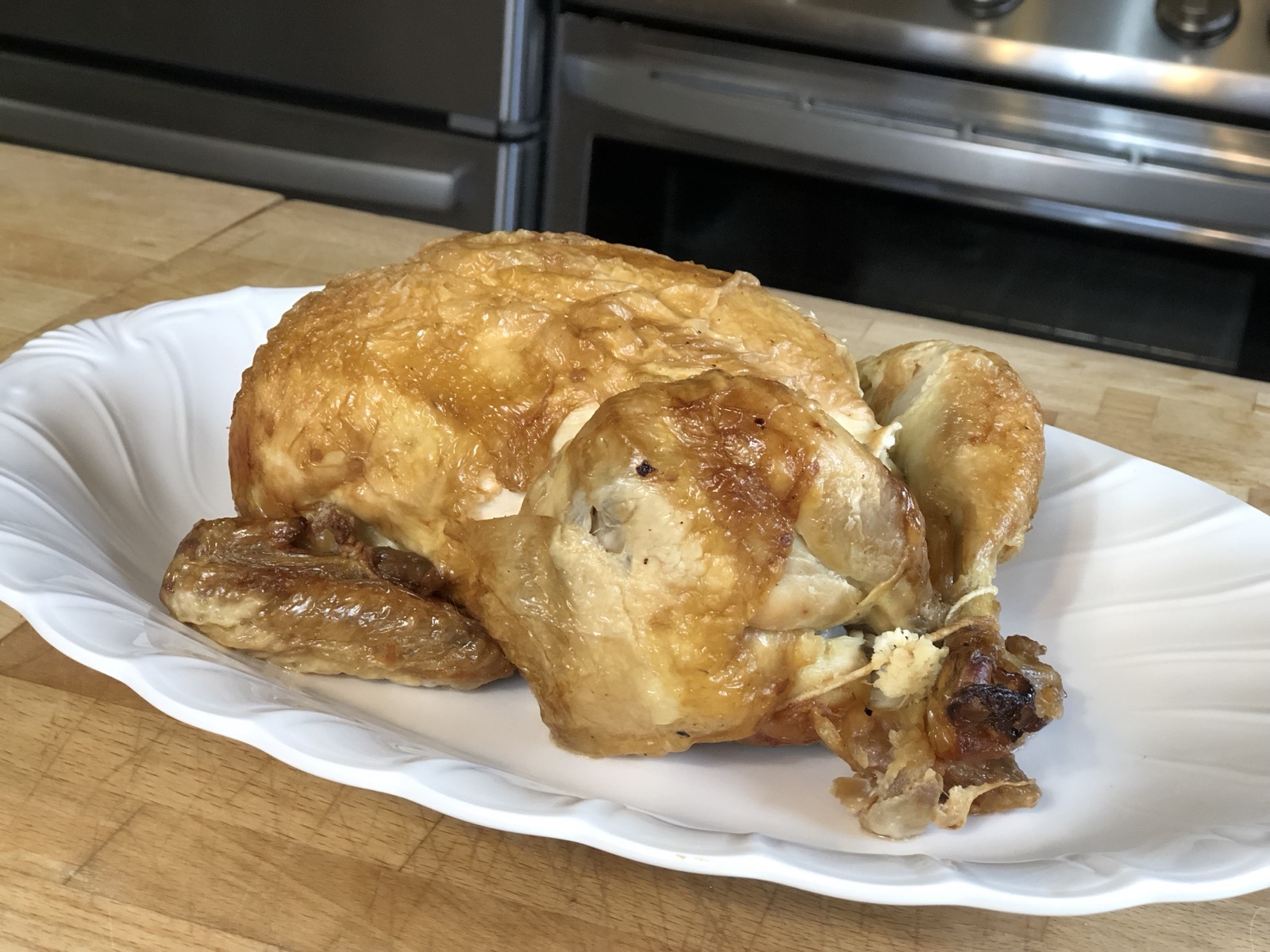 The bird, which came packaged in plastic with a convenient handled cardboard carrying case. It was visibly overcooked, with bones separating from the body as I moved it from its container to a plate. Visually, the skin was somewhat golden in color, with a shiny almost sticky appearance.

In terms of flavor and texture, the breast meat was dry with a slightly metallic flavor. In contrast, the thigh meat was soft and pasty with a mealy, almost livery texture. The skin was also lackluster, soft and flabby with very little seasoning.

Overall, this rotisserie chicken was unpleasant in every way, from its soft, unnatural texture to its less-than-desirable flavor. In fact, my husband’s comment after tasting it: "I think we can just throw this one out." I couldn’t disagree. 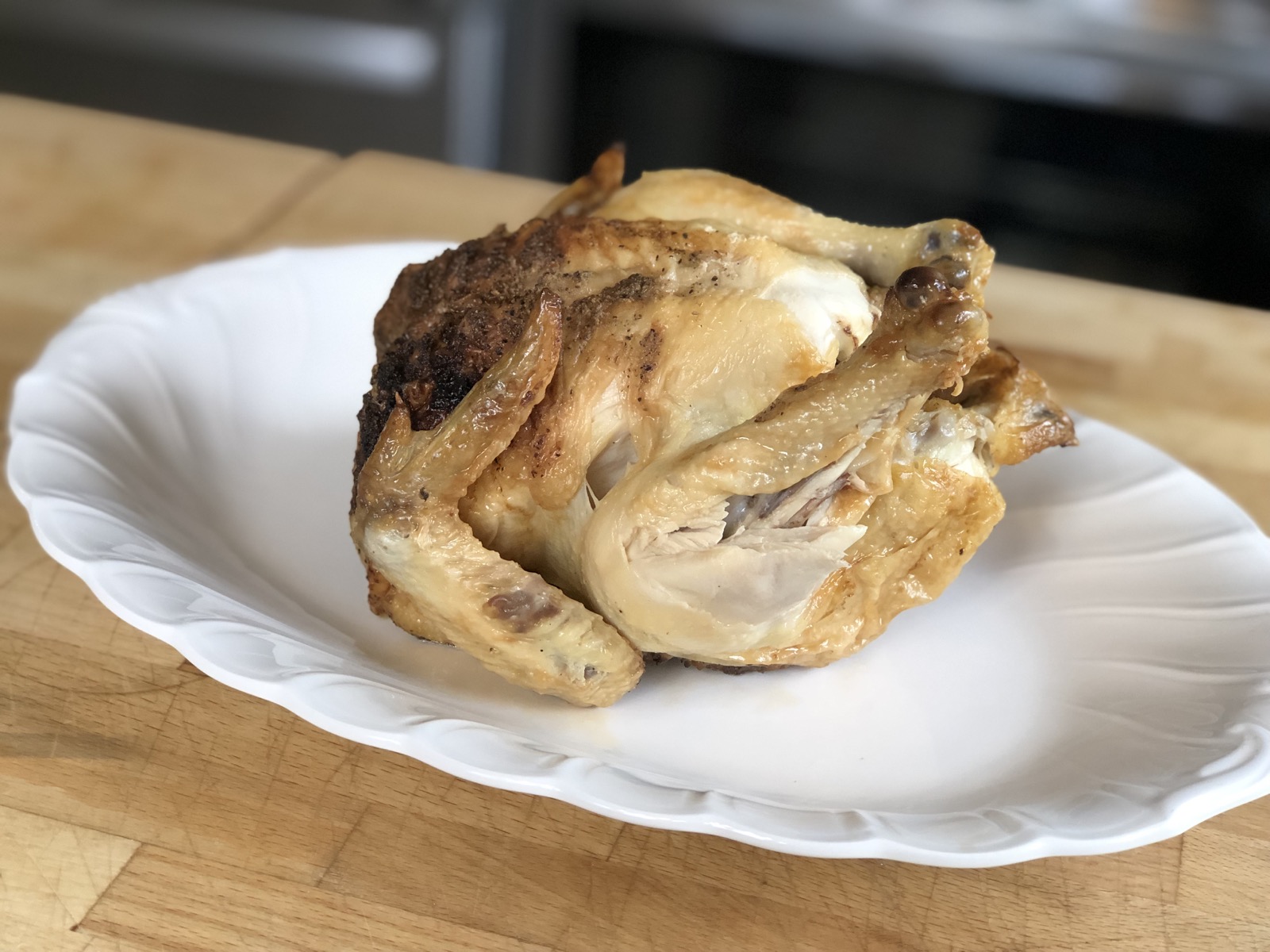 The rotisserie chicken at Fresh Thyme Farmers Market is packaged in a standard plastic case. Its appearance was unappealing, to say the least. The chicken was unevenly browned with particular color over the breast meat and a distinct paleness everywhere else. I also noted an excessive pool of juices in the container.

In terms of flavor and texture, the breast meat was tender and slightly spongy with a bland, pasty flavor. Interestingly, the thigh had virtually the same flavor and texture. Meanwhile, the skin was slightly salty and flaccid with the exception of the browned areas, which were more heavily seasoned and somewhat firm.

Considering the long list of ingredients – which suggests the bird has been injected with water, salt and starch – it was surprisingly bland. It’s overall texture was also lackluster at best. I wouldn't buy it again.

Note: For the purpose of the taste test, we chose the original/plain chicken. However, Fresh Thyme also offers seasoned rotisserie chickens in flavors including BBQ, Cajun and lemon pepper. 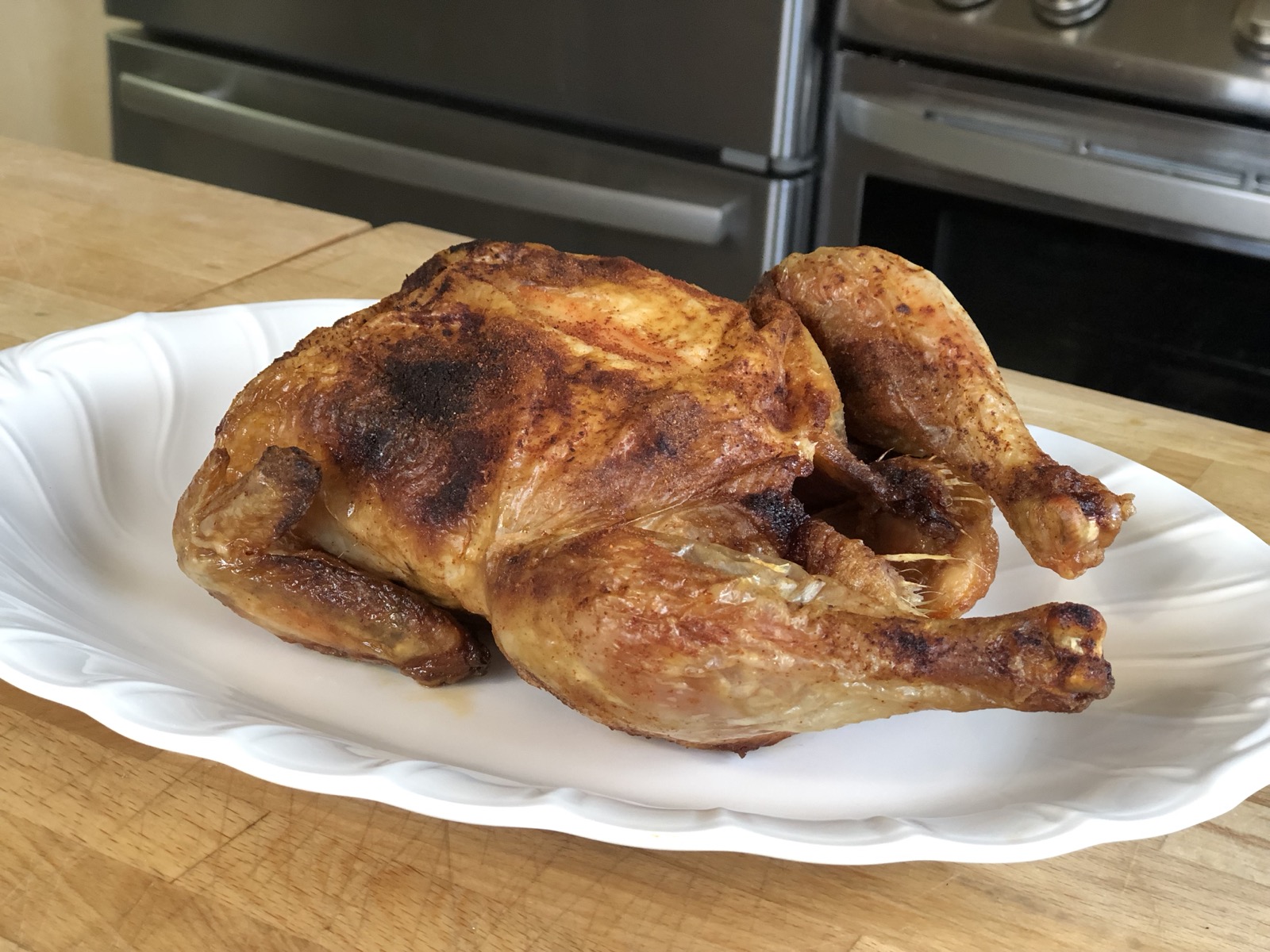 The rotisserie chicken from Outpost showcased the most minimal packaging of all the birds, encased in a simple, BPA-free resealable plastic bag. It was thoroughly browned, if somewhat mottled, on the skin, which was also quite wrinkled in its appearance. There was a significant amount of visible seasoning on the exterior and very little juice in the bottom of the packaging.

As for flavor, the breast meat was quite dry. It wasn’t well-seasoned, but it possessed a clean chicken flavor and a texture consistent with cooked chicken breast. Adversely, the thigh meat was very soft with a slightly mushy, pasty texture and (again) very little seasoning. The skin, on the other hand, most closely resembled that of a roasted chicken. It was slightly crisp with a good amount of toothiness.

I was impressed by this bird’s short, simple list of ingredients. It definitely tasted like chicken, and its texture wasn’t as objectionable as the lowest ranking birds. But it didn’t quite have enough salt to be truly tasty when consumed on its own. That said, if you’re concerned about sodium intake or prefer less salty food overall, this bird definitely qualifies.

Weight: 2 lb ¾ oz
Price: $7.99
Ingredients: No ingredients were listed on the package, which simply stated: "Natural Amish, XL. All natural, no added hormones, no antibiotics, cage-free" However, I called the store and they shared that the chickens are seasoned with salt, dried onion, paprika, spices and citric acid.
Saltiness: 3.5 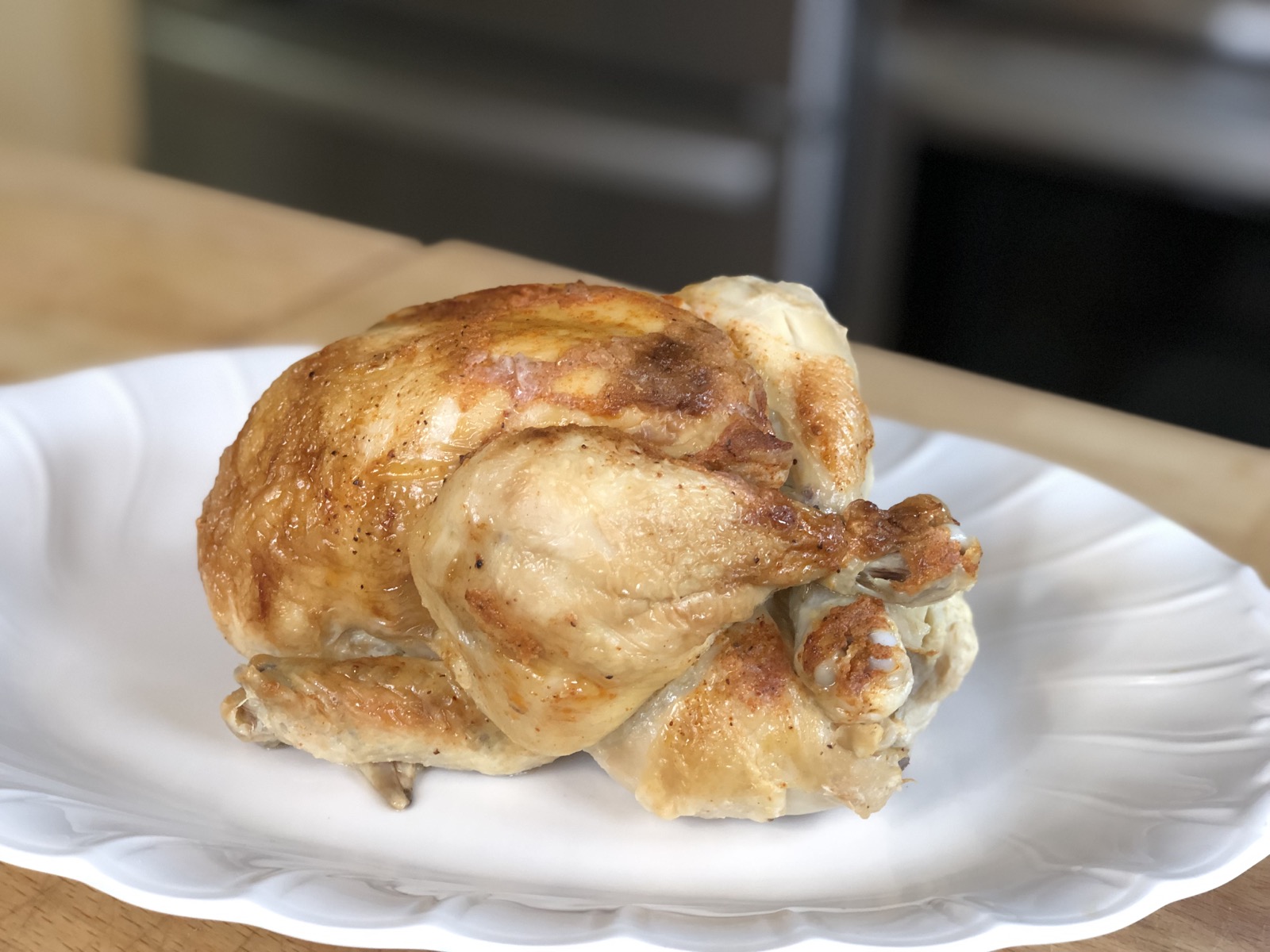 The Sendik’s chicken came packaged in the standard plastic shell. Inside, the bird was lightly browned with no visible crispness on the skin. There was a small amount of liquid in the bottom of the container.

In terms of flavor, the breast meat was significantly less dry than the lower ranking birds with a good amount of flavor and a relatively pleasing texture. The thigh meat was moist and flavorful with exactly the texture you’d expect. The skin, on the other hand was quite salty with a relatively unpleasant flaccid and sticky texture.

Overall, this bird fared relatively well, with a good overall flavor throughout. Its texture was also better than some, with the exception of the skin, which I’d probably discard (sad trombone). 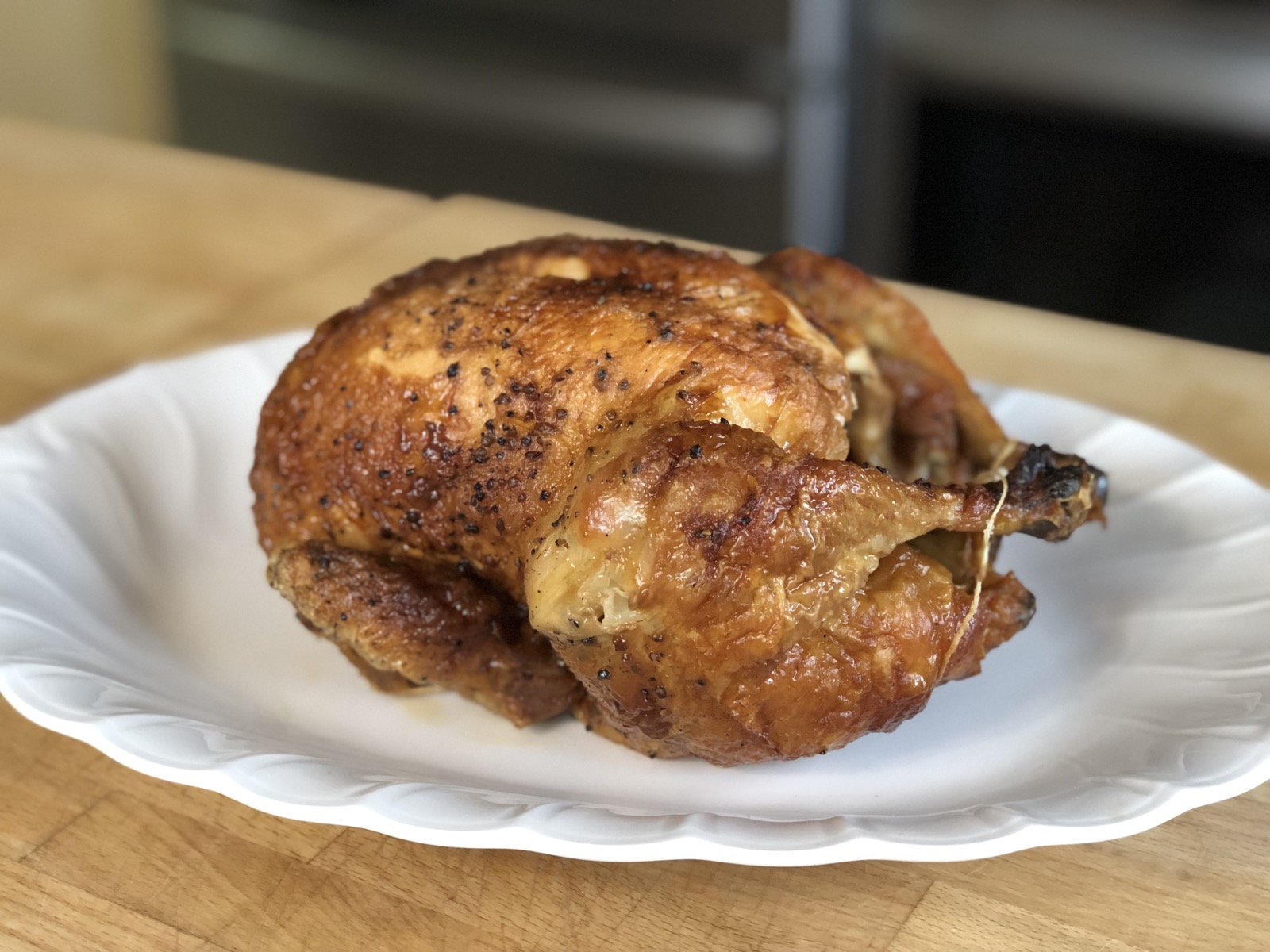 The Whole Foods chicken was packaged in plastic with a convenient cardboard carrier similar to that at Metro Market. The bird inside was evenly browned with visible seasonings that were well distributed over the exterior of the bird. There was a bit of juice in the bottom of the package, but not enough to be significant.

Like the bird from Outpost Natural Foods, the ingredient list on this bird was pleasantly short without any additives. In terms of flavor, the breast meat was quite dry, but nicely salted with a clean chicken flavor and a firm texture. Surprisingly, the thigh meat was also quite dry and a bit mealy; but again, it possessed a good amount of solid flavor. Meanwhile, the skin was sticky in terms of texture with a bit of crunch (and zip) from the liberal application of black pepper.

Overall, the flavor throughout the bird was solid. It very much tasted like a well-seasoned bird, and its texture was more pleasing than many of the other birds. In fact, it would have ranked significantly higher had it not been so disappointingly dry.

Note: For the purpose of the taste test, we chose the original/plain chicken. However, Whole Foods also offers organic rotisserie chickens for $9.99 and seasoned chickens in flavors including barbecue, Cajun and lemon. 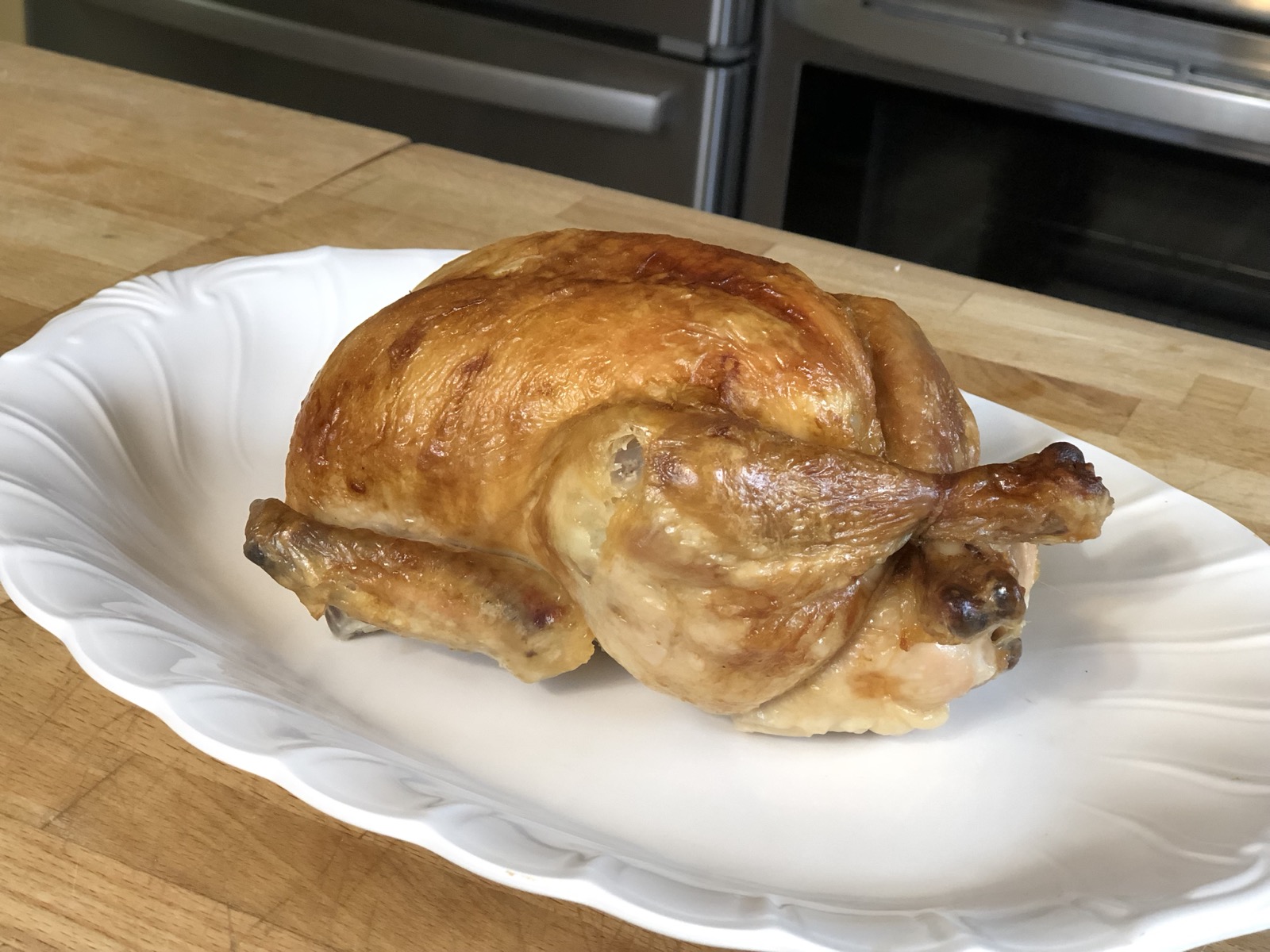 Again, this chicken was packaged in a standard plastic shell. Inside the chicken was attractive with lovely golden brown coloration. There was also a plethora of juices puddling in the container.

The bird's ingredient list suggests that it's been injected (or "enhanced") with a brine solution, which in all likelihood contributes to the meat's overall moisture and flavor.

As for that flavor, the breast meat was well seasoned and significantly less dry than some; but it did have a slightly pasty texture (it reminded me of the texture of chicken breast cooked a bit too long in a slow-cooker). The thigh meat had a good, solid texture with no objectionable mushiness and a nice, slightly salty chicken flavor. Meanwhile, the skin maintained a moderate level of seasoning; but it was somewhat chewy in terms of texture.

Overall, this was a flavorful bird with a pleasant level of salt and a moderately good texture. 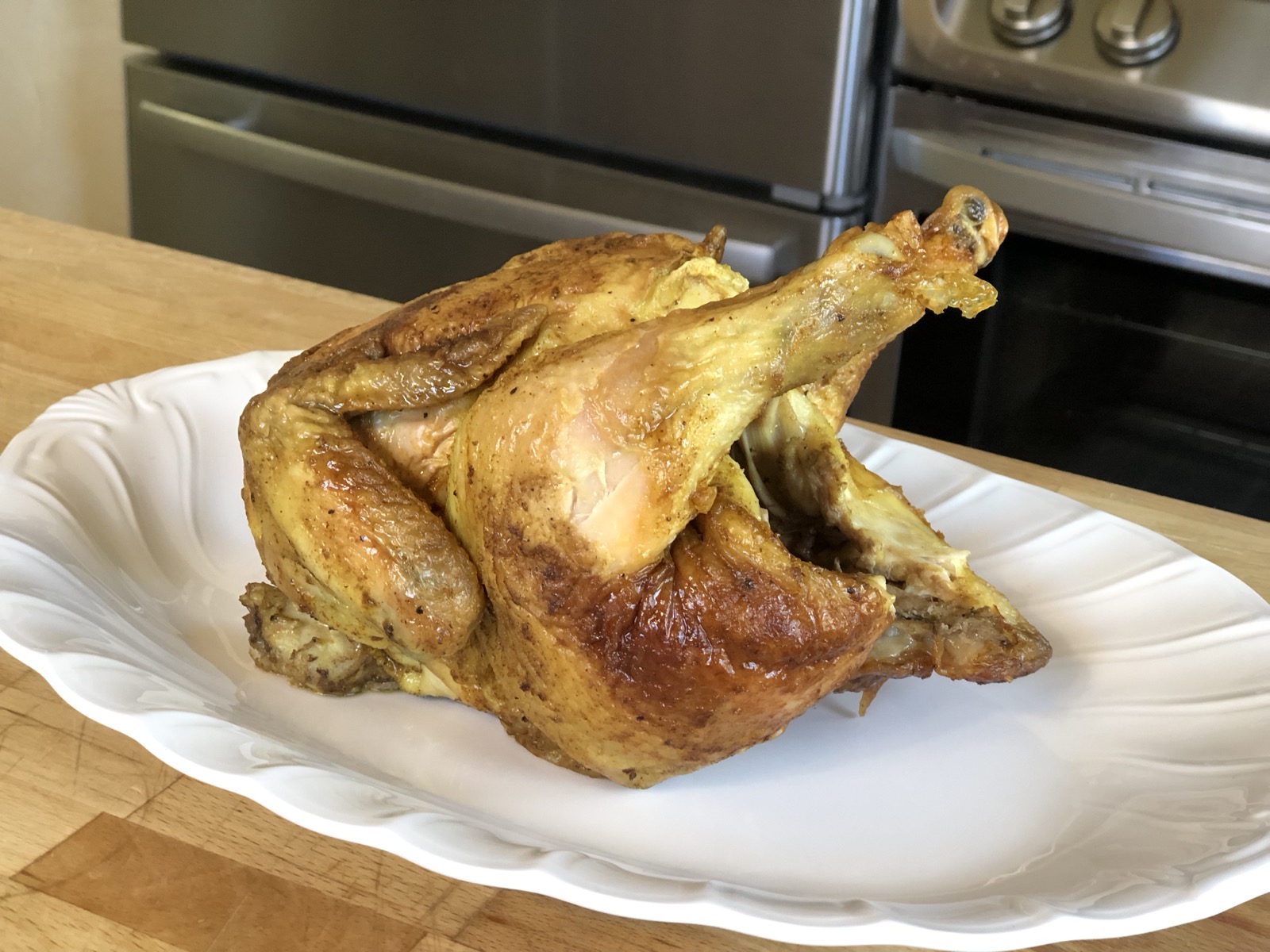 It’s important to note that Rupena’s rotisserie chickens are available six days a week (every day but Friday); but, you'll want to call to reserve one early in the  day, as they go quickly.

The birds are hand-packaged simply in an aluminum pan that’s covered with foil. Once unwrapped, I found a bird that was nicely browned overall with a slight yellow hue on the skin and in the juices (My suspicion is that there’s turmeric powder somewhere in their list of spices). I noted a minimal amount of residual juices in the bottom of the pan.

As for flavor and texture, the breast meat was ever-so-slightly dry; but it had a solid texture (not pasty or mushy) and a nice chicken-forward flavor. The thigh meat was slightly saltier than the breast and slightly softer in texture. Meanwhile, the skin was nicely seasoned, if somewhat sticky, with a good amount of texture and toothiness.

Overall, this bird was flavorful. It possessed pleasant salt levels and a fair amount of texture throughout. It also fared the best of the three chickens with the most basic ingredient lists. 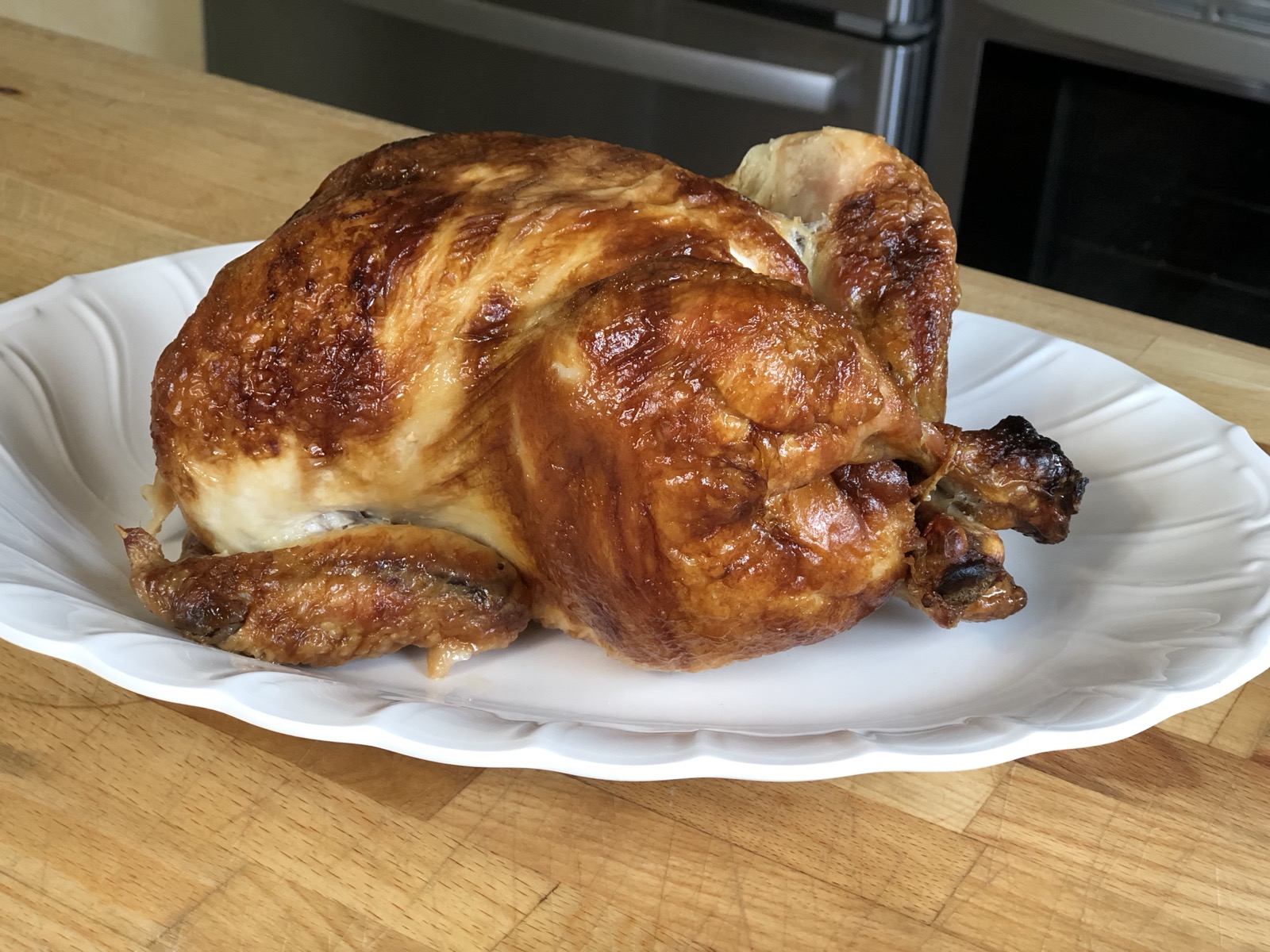 The Costco chicken comes in standard plastic shell packaging. The bird itself possessed a deeply browned exterior. It’s skin was vaguely wrinkled and the skin had pulled away from one of the drumsticks; but overall it was a decent looking bird. As for moisture, there was a significant amount of liquid in the bottom of the container.

The ingredient list on this chicken isn't as simple or natural as some, and you'll note preservatives like sodium phosphate and carrageenan (both added to keep the meat moist). If you'd prefer to avoid them, this isn't your bird.

That said, in terms of flavor and texture, this bird was superior to most. Its breast meat was a touch dry, but it maintained a good, toothy texture with no mushiness or pastiness. Surprisingly, its flavor was pleasant, mild and not too salty. The thigh meat was tender and nicely seasoned with a more pronounced chicken-forward flavor. Meanwhile the skin retained a good deal of its integrity; it was somewhat firm and toothy with a moderately salty flavor.

Overall, this bird possessed good texture and flavor throughout. It was pleasantly – but not overpoweringly – salty with a very classic chicken flavor.

Incidentally, the Costco bird is also the most affordable on the list (coming in at $0.11 per ounce), followed by much lower-ranking Fresh Thyme Farmers Market chicken (coming in at roughly $0.14 per ounce) and the lowest-ranking chicken from Metro Market, which costs $0.14 per ounce, and only if you purchase two).

Watch: We got a first taste of 3 Sheeps' new Cloudless Hard Seltzer