Founded by Daniela Varela, Ruby's Bagels is a business founded on family memories and a passion for cooking and sharing food with others.

Work on Zócalo, Milwaukee's first food truck park, is well underway at 636 S. 6th St. in Walker's Point. In fact, the park has set its sights on an opening by the end of June.

Zócalo will feature four resident food trucks, one rotating food truck concept and an incubator concept along with a tavern that will serve curated craft cocktails and a beer selection.

Familiar vendors will include the Mazorca Taco Truck, owned by Zócalo co-founder Jesus Gonzalez and Scratch Ice Cream, the concept run by partners Ryan Povlick and Dustin Garley which also has a location in the Crossroads Collective on Milwaukee's East Side. But new concepts will include Fontelle’s Eatery, Bowl Cut and the 2019 incubator concept: Ruby’s Bagels. 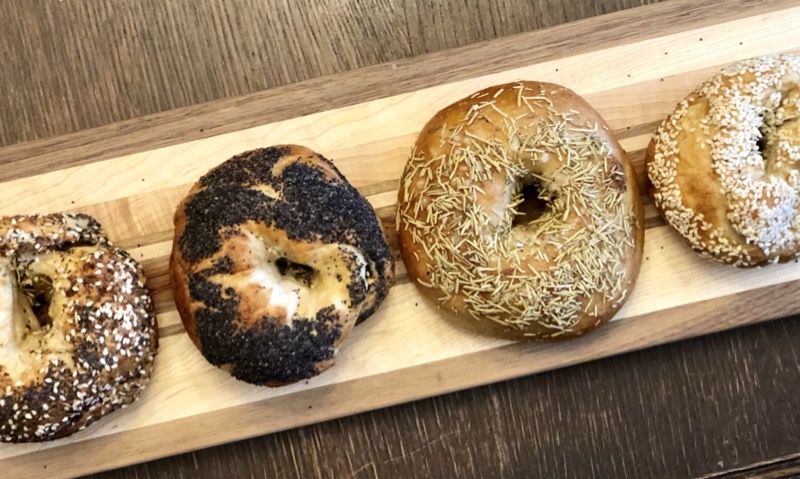 Founded by Daniela Varela, Ruby’s Bagels is a business founded on family memories and a passion for cooking and sharing food with others.

"Ruby is actually my middle name," Varela notes. "But it’s what everyone in my family calls me. I love cooking and baking for them, and that’s why I chose Ruby’s Bagels as the name. In a sense I want everyone who buys my bagels to feel like they are family."

She also wants Milwaukeeans to experience the flavor of her ideal bagel: one that's been what she calls "Spoiled & Boiled," a reference to the tender care taken during the bagels' hand-rolling and fermentation (during which she says her "babies" are spoiled) and the subsequent boiling of the bagels before baking, a process which locks moisture into the bagel and ensures a chewy crust.

Ruby’s Bagels will serve a rotating selection of handmade bagels in flavors like plain, rosemary sea salt, everything and sesame, along with specialty flavors like cinnamon and sugar. The bagels can be augmented with plain cream cheese or one of Varela's flavored spreads in flavors like green onion and cheddar, honey chipotle or strawberry. Bagels are expected to be priced at $3 each with cream cheese for $1.

Varela says that, since she expects to be busiest in the morning – when folks can stop by the truck quickly for breakfast – she’ll also offer cold brew and drip coffee from Colectivo Coffee.

Ruby’s Bagels will be the inaugural incubator truck at the Zócalo Food Park. To assist her nascent business, Gonzalez and co-owner Sean Phelan of Phelan Development will provide Varela with an outfitted trailer, along with a one-year lease at the food park and business mentoring as needed.

Her ultimate goal, Varela says, is to do well enough with the food truck that she can eventually establish a brick and mortar bagel shop on Milwaukee’s South Side.

This was the first day we got our hands on this groovy trailer! I am beyond thankful for this opportunity from the lovely folks at @zocalofoodpark for being the first participant in this incubator program! Hand rolled fluffy bagels are coming this summer to Walkers Point! By the time we are up and rolling the 🥯 trailer will have a complete Make Over 😊 Very grateful for you all and your support through all of Ruby’s Bagels Journey so far! Can’t wait to see your faces, the familiar and the new ones ❤️ thank you always for supporting the locals !!!! #milwaukee #walkerspoint

Bacon, bagels and a lifelong dream

Varela was born in El Paso, Texas. She was the oldest of five, with four younger brothers.

"My goal has always been to be a really good role model for my brothers," she says. "My parents emigrated from Mexico, and neither of them had gone to college. As the daughter of immigrants, there’s a lot of pressure to go to college, to make something of yourself."

Of course, sometimes life gets in the way of even the best-laid plans. When Varela graduated, she found herself electing to work full-time to make money for her family. As the years passed, she enrolled in a dental hygiene program at MATC and later pursued a major in microbiology at UWM. But neither gave her the satisfaction she was looking for.

Varela says she always knew she wanted to own her own business, but she says it took years before she realized that her true passion was connected to creating and sharing food with others.

"I’ve always loved to cook and bake," she says, noting that her love for creating food stems largely from her mother, an accomplished cook who welcomed Varela in the kitchen from an early age. "Even now that I don’t live at home, we love to talk about food and we’re always sharing recipes and tips and tricks."

Varela says her appreciation for bagels likely began when she was about 10 years old. At the time, her mother worked for Patrick Cudahy.

"She’d always come home smelling like bacon," Varela recalls. "She also made it a habit of bringing home onion bagels that she’d pick up on her way home from work. The smell of bacon and the taste of those bagels somehow intertwined and it became a really comforting memory for me."

Years later, Varela says she traveled to Ohio with her boyfriend on vacation. One day for breakfast, they happened to stop at a bagel shop for breakfast.

"The minute I bit into that bagel … it was so delicious," she says. "And I thought to myself: we don’t really have a good bagel shop in Milwaukee. Maybe that’s my calling."

From there, Varela spent two years obsessed with finding the perfect bagel recipe. She studied cookbooks, looked up recipes online and tweaked and tested recipes over and over again until she found a recipe that produced her ideal bagel.

"I loved them … everyone loved them," she says, noting that from there, she knew that the bagel business was the right next move for her. 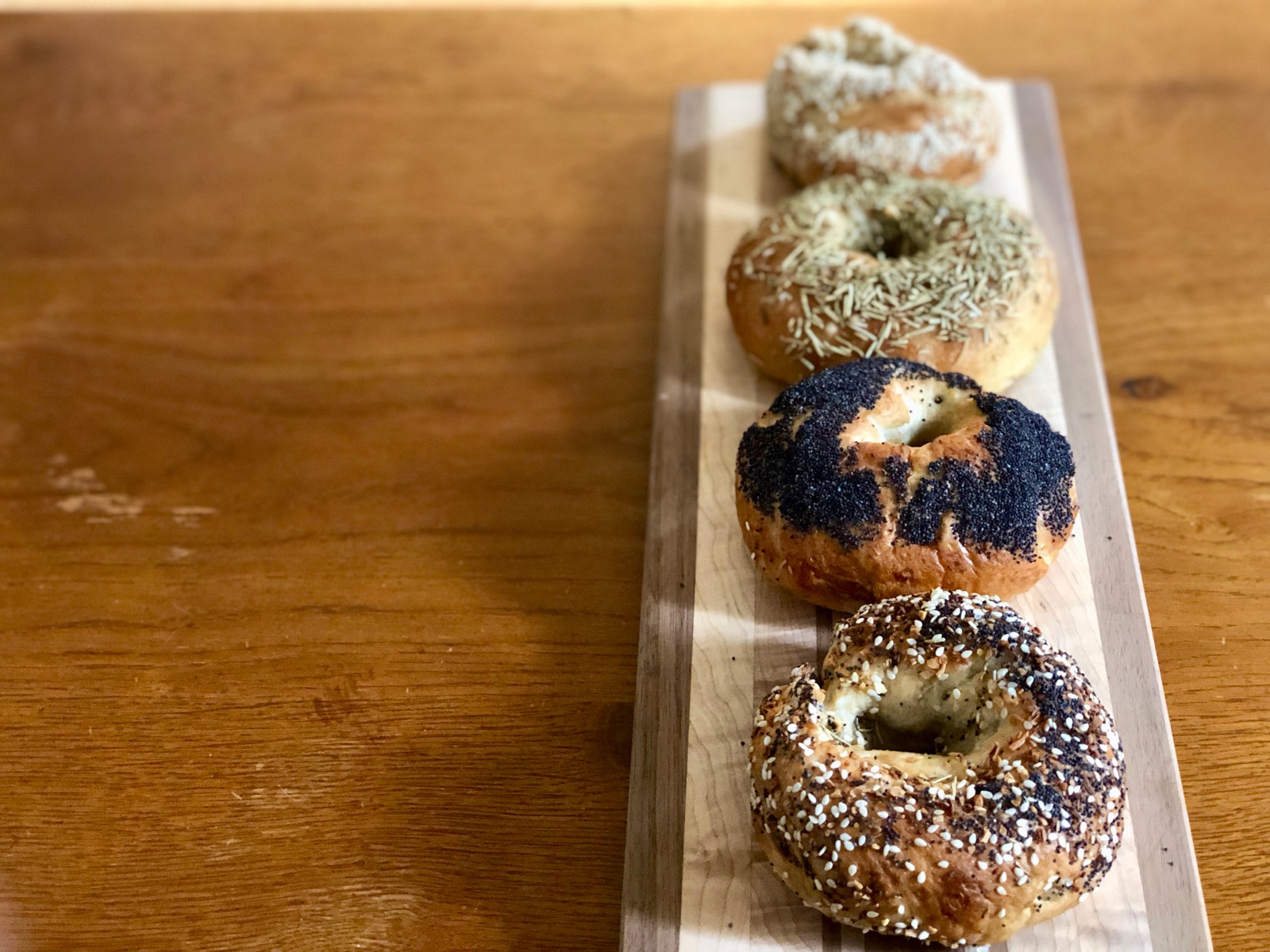 Varela created an LLC and worked with her boyfriend (and local artist) Michael Cerda to design a logo. Then she went on the hunt for a commercial kitchen that could accommodate the time, equipment and storage she needed.

"That was tough," she says. "But once I found a kitchen that would work, then the question became: Where can I sell these bagels?"

Serendipity was on her side. Mariyam Nayeri, owner of Botanica Galactica, 718 S. 5th St., asked if she wanted to sell her bagels at Mercado Magic, a weekly market she was hosting featuring local makers, collectors, artists and healers.

"At the first pop-up, I was so nervous," Varela says. "I wondered who would buy my bagels and was horrified that people wouldn’t like them. But the minute the market opened, the people walking in came directly to my table. We opened at 10 a.m. and I was sold out by 11:30 a.m. So the next week, I made 10 more bagels … and 10 more the week after that. We always sold out. And every time it was unbelievable to me. But it felt really good."

As awareness grew, Varela continued hosting pop-ups at the Mercado, and eventually branched out to host a series of sold-out weekend pop-ups at Pilcrow Coffee.

Thank you once again @pilcrowcoffee ! We are officially SOLD OUT! Until next time ! 🥯 #bagels #mke #local

Later this spring, the real magic happened. She was asked to consider a home for her business at the new Zócalo Food Park.

Varela says she's known Jesus Gonzalez for years. In fact, she's worked with him on projects including ‘YNotMe’ Magazine [a magazine showcasing individuals in the community who are making a positive impact], which launched earlier this year.

"When he started the Zócalo project, it didn’t even occur to me that I could be involved," notes Varela. "But he told me he loved what I was doing, that he believed in me and that he wanted me to be a part of the food park."

"I was speechless. I had envisioned doing pop-ups and farmers markets. I felt like I was skipping ahead; suddenly I have a bagel truck. So now I have to work even harder to really make this happen."

Ruby’s bagels is likely to debut with a relatively succinct menu of proven favorites. However, Varela says she has plans to expand the menu as time moves forward.

"From here, I’d really like to start incorporating more Mexican ingredients: Mexican chocolate, chorizo, jalapenos, chipotle peppers into the bagels and cream cheese," she says. "I’d also like to expand to do bagel sandwiches with flavor profiles similar to a breakfast torta."

You can look for Ruby’s Bagels soon at Zócalo Food Park. In the meantime, you can follow the business on Instagram.