Out of all the opinions out there about Safe House, I have to say it was a great experience. The server and other staff had me laughing at spy lingo, marveling at the decor and enjoying a different way to go out to eat.

One of the first things my mother was told when she came to Milwaukee was "you gotta go to Safe House."

As a Milwaukee staple, this restaurant has been on my bucket list since Day 1. I’ve heard multiple opinions about the Safe House experience: the whole idea is too cheesy, the food is bad, but also that it’s a really fun place to be. Out of all those, I have to agree with the last one. The server and other staff had me laughing at spy lingo, marveling at the decor and enjoying a different way to go out to eat.

Because I’d heard so much about the place, I was constantly expecting to fall into some booby trap. I gathered up two of my sneakiest friends and nervously opened the front door to the building, expecting someone to throw a bucket of water on my head or fall into a trap door. But that didn’t happen, and it turns out my expectations of consistent pranks were way off.

After getting inside, I ended up being safe and prank-free the rest of the visit. I was greeted by a "bouncer" who asked for the password, which one of my friends knew. He whispered the secret words into the bouncer’s ear, leaving him safe, but didn’t tell my other friend or me, leaving us to do an embarrassing task I knew was coming.

The bouncer had us put our hands in front of our chests like paws and hop around like a bunny. We had to hop over to our friend, who of course was filming us on his phone. But, thanks to my personality, being a little out there wasn't something I was unwilling to do, and after a minute of mild humiliation the bouncer opened the secret door, disguised as a bookcase.

We walked into the restaurant, receiving applause from the hosts for our little performance. Right away, I saw one of the flat-screen TVs everyone had told me about – the ones in every room that show footage of people doing the embarrassing tasks to get in. I was worried people would be making fun of us while we were there, but as far as I could tell, no one really paid much attention to the TVs or seemed to care. Probably because they had to do equally embarrassing tasks, and the TV volume wasn’t that high. 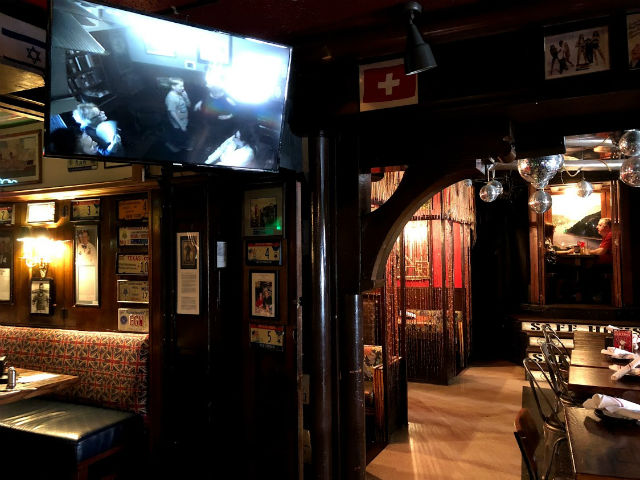 Our server, Agent Flamingo, as he introduced himself, explained that the restaurant had a large collection of cold war memorabilia. I looked around the building, which I soon found out was actually vast, with multiple rooms, and thought the decor was cool.

Flamingo delivered dry spy humor that had me giggling every time he stopped by our table. He called my friends and me "spies" or "agents" and referred to ordering and eating as completing a mission. When the food arrived, which seemed to be a lot quicker than I was expecting, we hungrily devoured the Spy Burger, Cuban Missile Crisis and Licensed to Kill Mac & Cheese.

I'd heard the food was bad, but I completely disagree because my mac n cheese was delicious. It was classic mac n cheese but with broccoli, bacon, chicken, peppers and topped with bread crumbs. The extra food items made for some great flavor combinations and extra twists. Luckily, I didn’t find any secret poison in my dish and finished the bowl in no time. 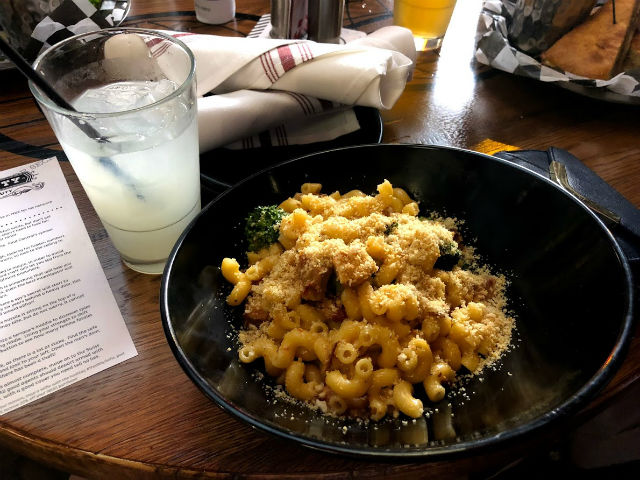 After we polished off our meal, Flamingo asked for permission to take away our plates by asking if our mission was complete, and then saying "I will now destroy the evidence." He said it so flatly that I was still giggling when he came back and asked if we wanted a "sweet mission" – dessert. We were so full that we passed on the opportunity.

We got our checks, aka "damage reports," and then left out of the secret exit, because that’s more exciting than going out the plain, boring back door. We paid $1 into a payphone-looking thing and descended a staircase, leading to a long hallway where we encountered a surprising mannequin. We ended up outside, behind the building.

Overall, I had a lot of fun. I thought it was a great theme for a restaurant and it helped me relive my childhood fantasies of being a secret agent. I thought it would’ve been better if we didn’t have to pay a dollar to exit, because we already bought a bunch of food, but I guess that’s why they had the second, more boring option.

I wished I had time to check out the magician that Flamingo told us about, so I will definitely be back for that, as well as the food and the bar. Now that I know the password, it should be an easy mission.