As the former InterContinental Hotel completes its transition into the Saint Kate, which calls itself Milwaukee's first arts hotel - joining a worldwide trend of infusing galleries and installations into high-end hospitality properties - artist Caroline Lathan-Stiefel began installing work this week.

As the former InterContinental Hotel completes its transition into the Saint Kate, which calls itself Milwaukee’s first arts hotel – joining a worldwide trend of infusing galleries and installations into high-end hospitality properties – artist Caroline Lathan-Stiefel began installing work this week.

The hotel, at 139 E. Kilbourn Ave., is slated to open on June 4 and so has begun to hang its permanent collection of more than 100 contemporary artworks, selected by Saint Kate curator Maureen Ragalie. 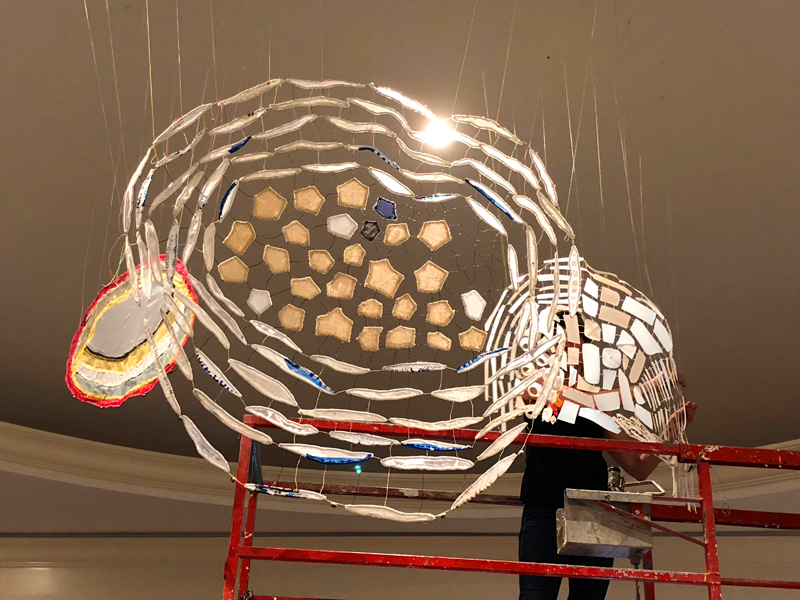 Lathan-Steifel’s work – which dangles in a few segments from the recessed ceiling in the lobby, just outside the two future art galleries – is the first. It is, says Ragalie, currently untitled.

"She is considering different names," says the curator. "She’s considering 'Nimbus,' because it’s very cloud-like. I expect she'll have a name soon."

The artist – who is married to composer Van Stiefel and lives in Avondale, Pennsylvania – has been creating outsized installations using a variety of materials, including fabric, pipe cleaners, wire, string, plastic, thread and fishing weights, since 2001. 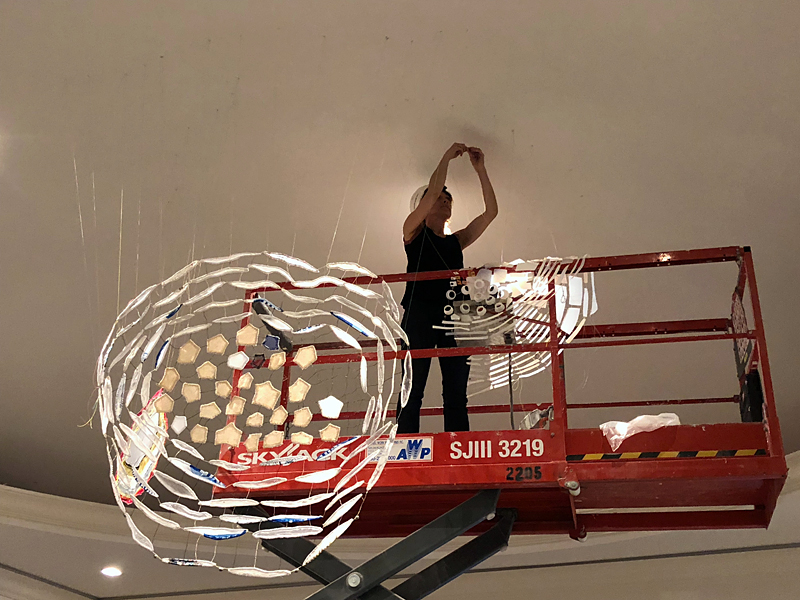 Her work has been shown a numerous galleries and museums, as well as outdoors. A recent show focusing on her work hung at Dallas’ Galleri Urbane last year.

"The installations are drawings-in-space that cover, divide, encircle, and fill the spaces in which they are situated," says Lathan-Stiefel in a statement on her web site. "Over the years, they have taken various forms: parasitic-like growths that cover interior architectural elements and outdoors structures; hanging tent forms that immerse the viewer; suspended walls that curve and divide spaces; excessive, organic masses that transform rooms into caves.

"Often my installation work has focused on rhizomatic structures. Previous room-sized pieces have been inspired by marine and plant biology, as well as architectural and urban models. While the forms that make up my work suggest systems or structures, they are also meant to somehow reflect time and my own hand in the work."

Five of the property's rooms will be designed by Milwaukee artists.