Crooning Saint Motel checks in at the Big Gig

If you're into pretty-boy pop masquerading as indie rock, you may have found yourself at the Saint Motel show Sunday night at Summerfest. Frontman A/J Jackson and company brought their pop-indie sensibilities to a dancing, teenaged and 20-something crowd at the U.S. Cellular stage.

If you’re into pretty-boy pop masquerading as indie rock, you might have found yourself at the Saint Motel show Sunday night at Summerfest.

Frontman A/J Jackson and company brought their pop-indie sensibilities to a dancing, teenaged and 20-something crowd at the U.S. Cellular stage (a dreamscape for any buyer who works for either Urban Outfitters or Anthropologie).

Ever-gracious and seemingly genuine, Jackson talked with his fans and sprinkled "Milwaukee" into as many crowd interactions as possible.

For starters, he announced that it was the band’s first time in Milwaukee, so "What should we do?" He noted that he had visited the Milwaukee Public Museum earlier in the day – he declared it "awesome."

Around the third song in, Saint Motel pulled out "Benny Goodman," clearly a crowd favorite. 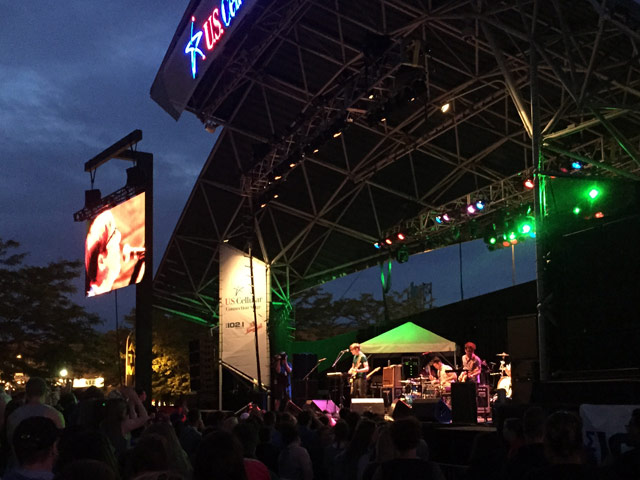 It’s tough to predict this sleek-sounding band’s staying power. Sure, the individual members have their street cred (made their way to Los Angeles, went to film school, worked in a sushi restaurant, yada, yada, yada), but there’s something about them that seems fleeting. That said, they have two major assets that could certainly work in their favor: Jackson’s clear, clean, big vocals (that bring to mind ‘80s Simple Minds and ‘90s Franz Ferdinand lead singers) and some killer riffs from the sax and trombone. ("That’s hot," as Paris Hilton, who DJ’d just a few stages away the same night, would say.)

Before launching into "Daydream / Wetdream / Nightmare," Jackson once again thanked the crowd for being so welcoming, noting, again, his band’s first time in Milwaukee.

Saint Motel wisely leverages the musical sound of virtually every recent decade that precedes them. The rich, brass harkens back to a tropical sound from the ‘60s, the bouncy pop throws back to the ‘80s, and the indie-rock reminds us of the ‘90s.

Speaking of years, "1997" came up about halfway through the set. Fittingly, it’s the year in which most of the audience members were born. The band rounded out its time on stage with "Cold Cold Man," "Ace in the Hole," and "Midnight Movies," with its ‘70s vibe and others. (Jackson attempted a sing-along at least twice, including with "Midnight Movies," but it never really stuck.) 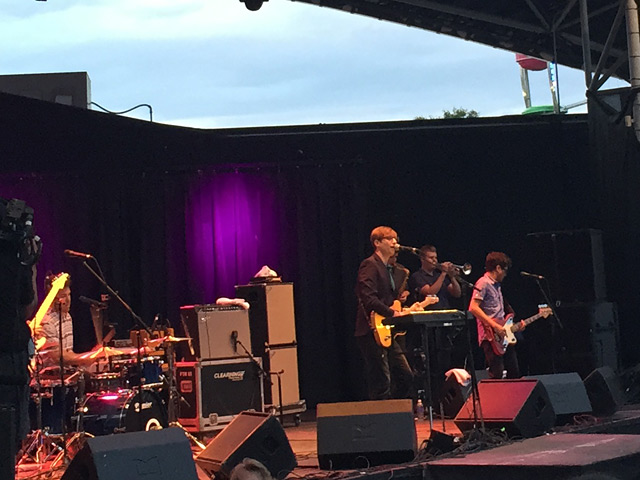 Before Saint Motel’s final song of the night, the band unleashed the radio-friendly, omnipresent "My Type," with its glorious horns and exuberant vocals.

Jackson, explaining that he himself is from Minnesota, thanked Milwaukeeans at least a few more times during the set, including mentioning, "Hopefully, we’ll be back."

Velia Tarnoff counts among the loves of her life her daughter, her husband, her friends, writing, developing theories, dancing, live music, Southern California, black coffee and red wine. She's happiest when she can put as many of those together as possible. WWith more than 20 years of experience as a radio reporter and public relations professional, Velia is a natural communicator who loves to hear stories, to share stories and to tell it like it is.

Velia earned her B.A. from the UW School of Journalism and is thankful for every moment she spent on that wonderfully wacky campus.

And, in the interest of full disclosure, Velia is the wife of OnMilwaukee.com Publisher Andy Tarnoff.

Lita Ford is still rockin' out

$5 Summerfest foods are really a thing!