In Search of the Perfect Pizza

San Giorgio Pizzeria Napoletana was under construction when Rick Rodriguez retired his blog "In search of the perfect pizza," but he vowed to come back and write one last blog about Milwaukee's first and only certified Neapolitan pizzeria.

San Giorgio Pizzeria Napoletana was under construction when I retired my blog "In search of the perfect pizza," but I vowed to come back and write one last blog about Milwaukee’s first and only certified Neapolitan pizzeria.

It’s a pretty big deal if you’re a true pizza lover, so how could I not? Besides, this is an exciting time for San Giorgio Pizzeria, which celebrated its second anniversary in February and continues to build momentum. Yes, they’ve been open for 2 years, and I’ll bet many of you haven’t dined there yet, and some of you haven’t even heard of them!

Chef and owner, Gino Fazzari completed the training and received his certification several months before the restaurant opened. He chose the name of the restaurant for his patron saint San Giorgio (Saint George) and as an homage to his cousin Giorgio Pazzano, with whom he is close. Giorgio is Gino’s formal first name, as well.

The oven is a Stefano Ferrara certified VPN oven made with beautiful Appiani Blue tiles, the first of its kind. The oven bakes the pizzas at 850 to 900 degrees, using oak and cherry wood, and the pizzas cook in 70-90 seconds. Yes, that is fast, but the oven only cooks three or four pizzas at a time, so when they’re busy, set a realistic expectation for the arrival of your pizza. Get an appetizer and a beverage of your choice, and relax.

San Giorgio also acquired and committed to continue acquiring the mandated ingredients, such as "Double Zero" flour and imported San Marzano tomatoes for the sauce, and has implemented a pizza making process in accordance with the VPN rules, established in 1984 by a team of original pizza masters and current AVPN President Antonio Pace, and supported by the Chamber of Commerce, Handicrats & Industry.

There are no dough rollers or flipping dough in the air like you see at other pizzerias. The dough is fermented in a "proof room" in two stages over 20-36 hours and methodically and gently "stretched" by hand. I never get tired of sitting at the counter and watching these masters at work!

Per the VPN website, the rules were established because "Old Neapolitan pizza masters, given the spreading of fast-food chains and the large use - sometimes inappropriate- of the denomination "Original Neapolitan Pizza", decided to found an association based on a protocol in order to protect and increase the value of the pizzas produced and processed according to the old Neapolitan traditions and customs." My fellow pizza nerds can get more details here.

There are ten pizzas on the standard menu and another two or three pizzas on the "specials" menu that change regularly. Pizzas are about 11 inches in diameter and served cut into four pie slices. The slices are meant to be picked up and folded length-wise to eat, as you would typically eat a New York style slice. 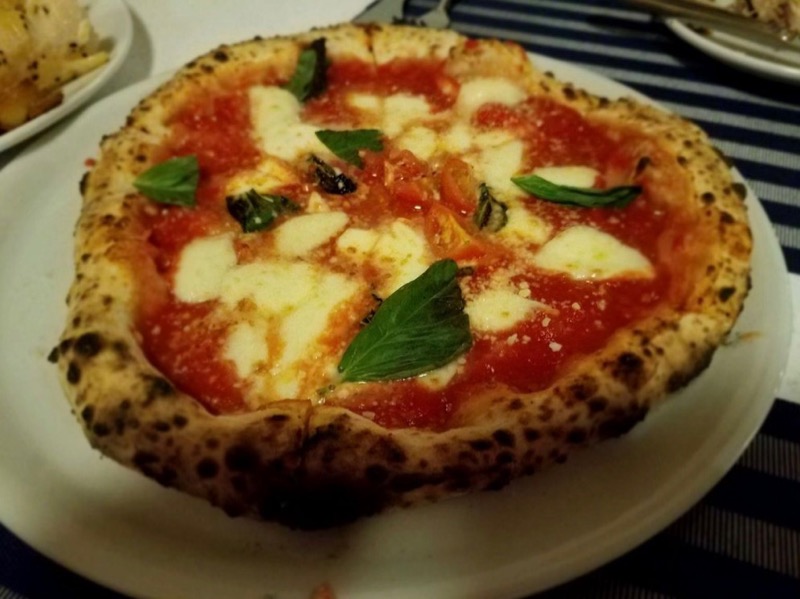 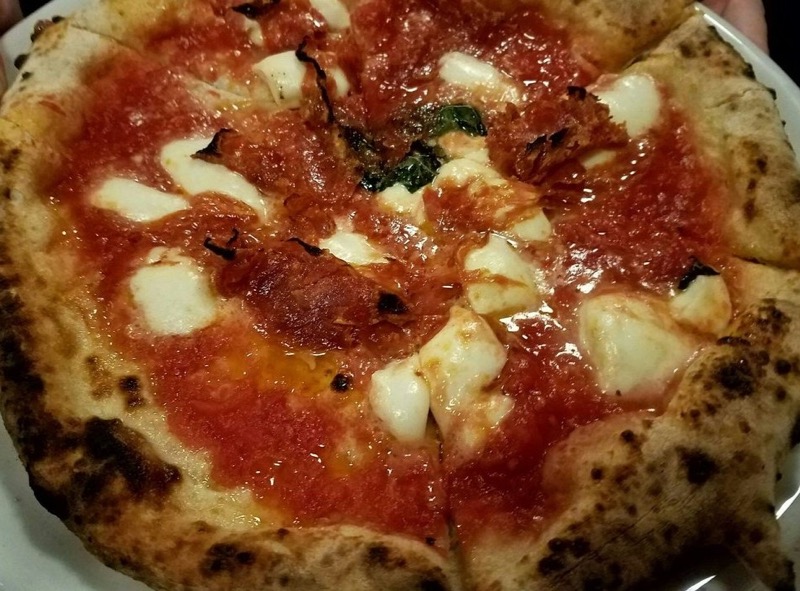 It isn’t just the standard menu pizzas I keep going back for. A year ago, Chef Robin Brown joined the San Giorgio team, and he’s been creating delicious Neapolitan style pasta dishes, in addition to the pizza specials. A few that stand out to me are the housemade gorgonzola- stuffed gnocchi with cream sauce, paccheri pasta alla Genovese featuring braised shredded pork ribs with 16-hour braised onions, and pappardelle pasta alla Bolognese. 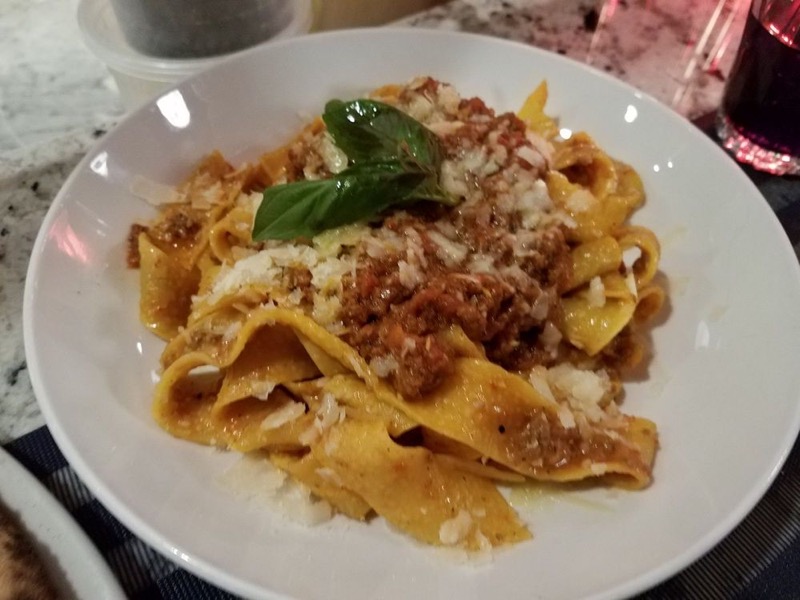 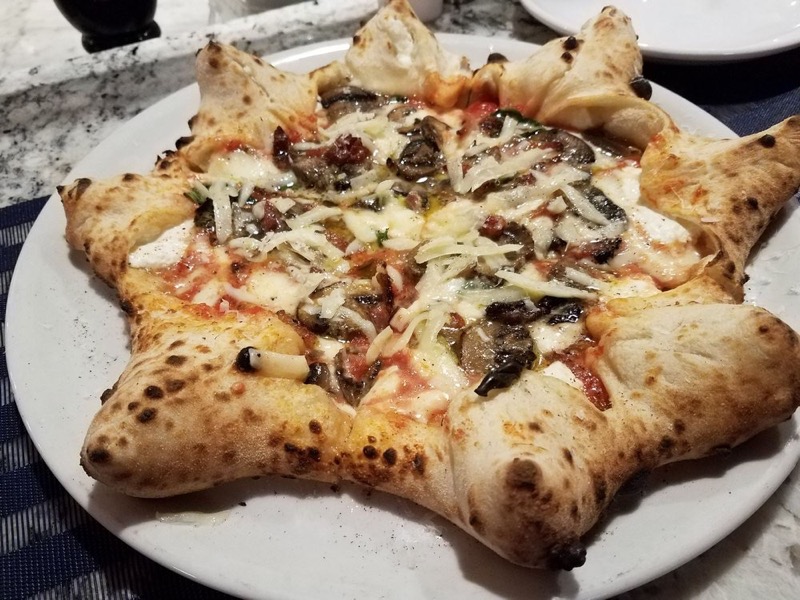 A gluten-free crust is not available, but I’m told they are working with the VPN Association for an approved gluten-free dough recipe; but that’s not as easy as it may sound, so stay tuned.

Aside from pizzas, the menu includes delicious appetizers, salads, a rotisserie chicken dinner, and chicken minestrone soup. If you’ve managed to save room for dessert, options include sorbet, gelato, tiramisu, or the eye-popping Nutella Calzone! 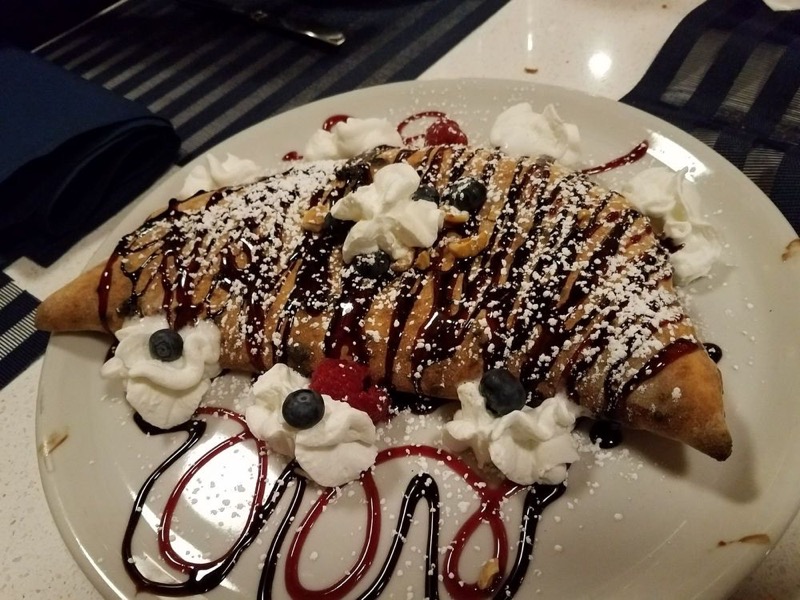 On April 16, San Giorgio is hosting its first VPN dinner, a (sold out) 6-course feast that will feature honored guests such as Antonio Pace, President of AVPN Naples, Italy (yes the man that lead the process of establishing VPN rules); Peppe Miele, President of VPN Americas Inglewood, CA); and Gianlucca Liccardo, Marketing Director of AVPN, also in town from Naples, Italy. Then on April 23, San Giorgio will celebrate the Feast of San Giorgio; details have not yet been announced for the celebration.

After a challenging first year with some pizza making and kitchen staff turnover and educating customers about VPN and this style of pizza, San Giorgio Pizzeria has found its groove, has a very strong veteran cooking staff, and it has grown to be as popular as its sister restaurant, the Calderone Club next door.

They are busiest on nights when Marquette or the Bucks have a home game and when there is a performance at one of the nearby venues, but they take reservations and your chances for a table or spot at the pizza-making counter without a reservation are pretty good on a Monday or Tuesday night. They aren’t open for lunch, and parking is available on the street or you can use valet on weekends or other busy nights. Now you know what you need to know, so go find out what sets San Giorgio apart from the others.

in search of the perfect pizza, pizza