Chef Sandroni channels experience with cancer into "Taste of Hope"

The recent "Taste of Hope" dinner brought together six chefs who donated their time to help raise funds to fight Leukemia and Lymphoma. But, maybe none had a more fervid motivation than Peter Sandroni, owner of La Merenda and Engine Company No. 3.

Recent years have been good to Milwaukee, a city whose dining scene has exploded over the past twenty years. And that’s largely due to the sheer talent of the chefs within our midst.

They’re folks who not only feed us with their delicious and often innovative cuisine but who work together to see to it that Milwaukee dining continues to push forward in meaningful ways. Maybe most impressively, their work is focused not only improving their own craft, but on giving back to the community in which they live.

And seldom are their generous efforts more sententious than when they are inspired by a deeply personal experience.

A taste of hope

This past weekend, six Milwaukee chefs participated in the inaugural Taste of Hope charity dinner at La Merenda. The event, curated by Britta Kramer, founder of Private Palate (a company which provides personal chef services), was held in support of Lindsay’s Voice, a local charitable organization founded in memory of Lindsay (Wenzel) Lopez to create awareness and raise funds for the prevention and treatment of Leukemia, Lymphoma and blood cancers. 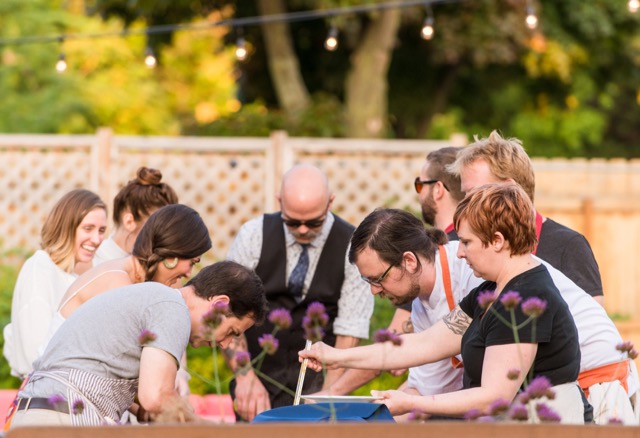 All six chefs generously donated their time and energy to the event, which was hosted by David Eyrise and Lindsay’s mother Karen Wenzel, and underwritten by numerous sponsors, resulting in $8,000 being raised for the cause. But maybe none had a more fervid motivation than Peter Sandroni, owner and chef of La Merenda and Engine Company No. 3.

Sandroni is known for his generosity, not only in supporting small family farms with his commitment to fresh, local food, but also in giving back to the community in as many ways as he can.

"It’s a really important part of our mission as a company to give back to the community," he says. "We even make sure we hire people who believe in this mission … everyone, right down to the dishwashers. You can only take so much before you need to give back. It’s about stewardship."

Face to face with cancer 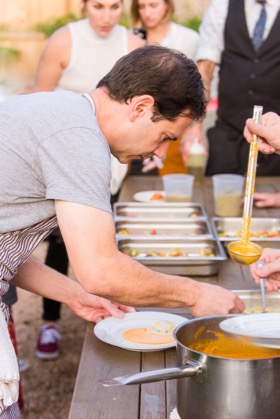 But the Taste of Hope event hit particularly close to home for Sandroni, whose mother Ginny, has been in treatment for a plasma-based cancer called Multiple Myeloma for the past eight years.

"It feels different," he says. "There’s a much more personal connection to this cause … even more than the connections we maintain with farms. This has life or death implications. And I’ve seen firsthand how cancers like this impact people and families."

Sandroni says Ginny, now 71, was diagnosed just after his daughter Isabella was born.

"Her illness went undiagnosed for some time," he says. "She’d been caring for my grandfather, who was wheel-chair-bound. And she started to have trouble with her back. At first, everyone chalked it up to lower back strain. But eventually, her blood work came back with the full story."

Multiple Myeloma, Sandroni explains, is a cancer which attacks plasma cells. Because it is a blood cancer, it can cause bleeding and bruising, along with a compromised immune system, kidney problems, bone weakness and organ malfunction.

"Over the years, she’s had countless blood, hemo-globin and plasma transfusions," he notes. "And she’s been under constant care and treatment for the past eight years. She’s had two auto bone marrow transplants. And she goes in weekly for lab work and either chemotherapy or steroids."

Although it’s been a long road, Sandroni says they’ve been blessed in many ways. Milwaukee is home to Dr. Parameswaran Hari, one of the top specialists for her particular cancer, so she’s had access to the best treatment possible. She’s also benefited from a network of family and friends, all of whom pitch in to help where needed, including taking turns driving her to her doctor visits and treatments.

"She’s doing as well as can be expected right now," Sandroni explains. "In some cases, she does better than expectations. She’s a really tough woman, she’s with the right doctor, having the right treatment, a great network, and a spiritual disposition – and I think that’s what’s gotten her this far. And she has grandchildren from the age of 6-16, and she feeds off of their energy."

He also notes that there have also been unexpected professional benefits that have resulted from the relationships built over the past eight years.

"Dr. Hari and his wife come into the restaurant frequently," says Sandroni. "And after one occasion, his wife Nisha and I got to talking about cooking. One thing led to another, and she came to Engine Co. to teach me how to make a number of Indian dishes. I really cherish the relationships I’ve been able to create and nurture thanks to a variety of unexpected circumstances."

Although there’s often skepticism with the speed at which cancer research is implemented, Sandroni says his mother’s journey is part of what has inspired him to really get behind the work that organizations like Lindsay’s Voice are doing.

"We’ve been lucky to have seen so many advances in treatment of the disease over the past eight years," he says. "Years ago, they’d treat people with a variety of different types of cancer the same way. But today, it’s very personalized. It’s not hard to see how causes like this make such a big difference in terms of funding research that really moves things forward."

For more information about Taste of Hope and Lindsay’s Voice or to make a donation, visit Tasteofhopewi.com. For more beautiful photos from the event, gtbimagery.com.

Survivor gives back after cancer