The Fraternal Order of Real-Bearded Santas is a real thing

There is exactly one member of The Fraternal Order of Real-Bearded Santas living in Wisconsin. It's Brian Lewis, a retired IT professional living in Fond du Lac.

Just like snowflakes and personal opinions of fruit cake, not all professional Santas are the same. However, in order to join a particular Santa organization, all of the members must have one thing in common: they must sport a real beard.

The Fraternal Order of Real-Bearded Santas (FORBS) is based in California and has basically two goals: to unite and support professional Santas with white hair growing from their faces and to enhance the image of Santa through fostering the spirit of the season and respect for all children regardless of race, creed, religious denomination and so on.

There is exactly one member of FORBS living in Wisconsin. Brian Lewis, a retired IT manager living in Fond du Lac, joined the organization this year when he wanted to step-up his Santa game from a part-time volunteer to a professional Kris Kringle. (He still makes numerous volunteer appearances.)

"Through the organization I’ve gotten great support. We share stories, give advice and just make it easier in general to be a real Santa," says Lewis, who has five grown children and five grandchildren.

Lewis started out as a fake-bearded Santa, but while Facetiming his granddaughter after not shaving for a while she said, "Poppy, you look like Santa!" Lewis decided at that moment he would continue to grow out his beard, which is about 90 percent white, and started looking online for "real Santa" mentors. Eventually, he found fellow true-bearded Santa, Mike Wubker.

"He helped me find the Santa I had in me," says Lewis. "So I joined the organization. Being Santa is one of the most satisfying things I’ve done in my life."

This season, Lewis will appear as Santa at corporate parties, private parties, hospitals and special events, particularly those benefiting veterans. 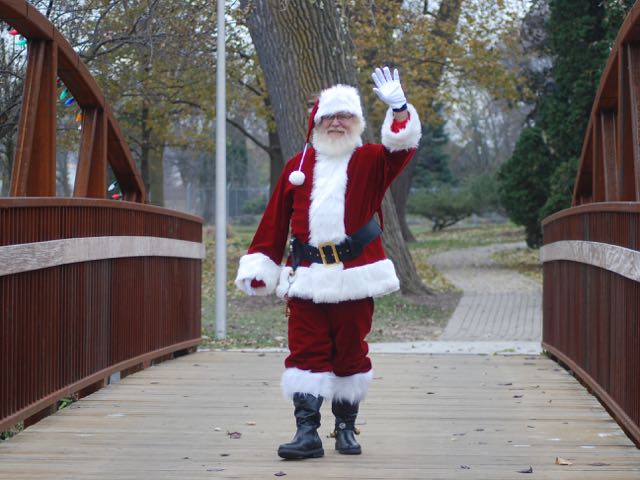 Lewis and his wife are lifelong Christmas-appreciators and even prior to Lewis transforming into Santa they collected more then 200 Santa figurines. Lewis says he’s working on his wife to play Mrs. Claus.

Membership to FORBS is $35 a year and provides the connection to the other bearded Santas as well as discounts for background checks and liability insurance – both of which are usually required for the most-coveted Santa gigs.

As a member of FORBS, Lewis is required to live out the basic tenets of Santa – respect, kindness and generosity – even when he’s not wearing the red suit. Because of his Santa-like demeanor, and his full, white beard, he is often referred to as "Santa" by strangers in passing and even not during the Christmas season.

"I’ll be at Walmart and someone will walk by me and say, ‘hey, Santa,’" says Lewis. "As FORBS members, we’re always Santa."

However, having a real beard has its on-the-job drawbacks sometimes. "Babies and toddlers love to pull on it, and since it’s connected to my face, it doesn’t usually feel very good," he says. "But if a little thing like beard pulling bothered me, I couldn’t be Santa."

Lewis says the only thing that bothers him about being Santa is when parents force their crying kids to sit on his lap, even though he understands they want to get a commemorative photo. But when the kids are happy to chill with Santa for a few minutes, which is most of the time, seeing the joy on the parents’ faces is one of Lewis’ largest rewards.

So what does Lewis say to children when they ask him if Santa is real?