Lao food is slowly but surely gaining recognition thanks to restaurants like Mekong Cafe and Vientiane Noodle Shop, along with young Lao entrepreneurs like Alex Hanesakda of SapSap and chefs like Darleen Vanmanivong who have dedicated their time and energy to bringing the bright, bold flavors of Laos to the fore.

Fresh herbs, hearty soups and signature sticky rice are just a few of the hallmarks found in Lao fare, a cuisine which has – until recently – been largely overlooked in the U.S.

Or maybe it’s better to say that the cuisine has gone largely unrecognized. After all, Lao staples – and countless variations – including papaya salad, beef jerky, larb and pho (some of which have origins in Laos) are made and eaten in a variety of Southeast Asian locales and often attributed to Laos’ neighboring countries, including Thailand and Vietnam.

But Lao food is slowly but surely gaining recognition thanks to restaurants like Mekong Cafe and Vientiane Noodle Shop, along with young Lao entrepreneurs like Alex Hanesakda of SapSap and chefs like Darleen Vanmanivong who have dedicated their time and energy to bringing the bright, bold flavors of Laos to the fore.

"If you ask any Lao person what they do at family gatherings, they’ll tell you… we eat!" says Vanmanivong, a native of Rockford, IL, who worked in sales and higher education before making the decision to attend culinary school in her late 20s. "And food is absolutely central to Lao culture." 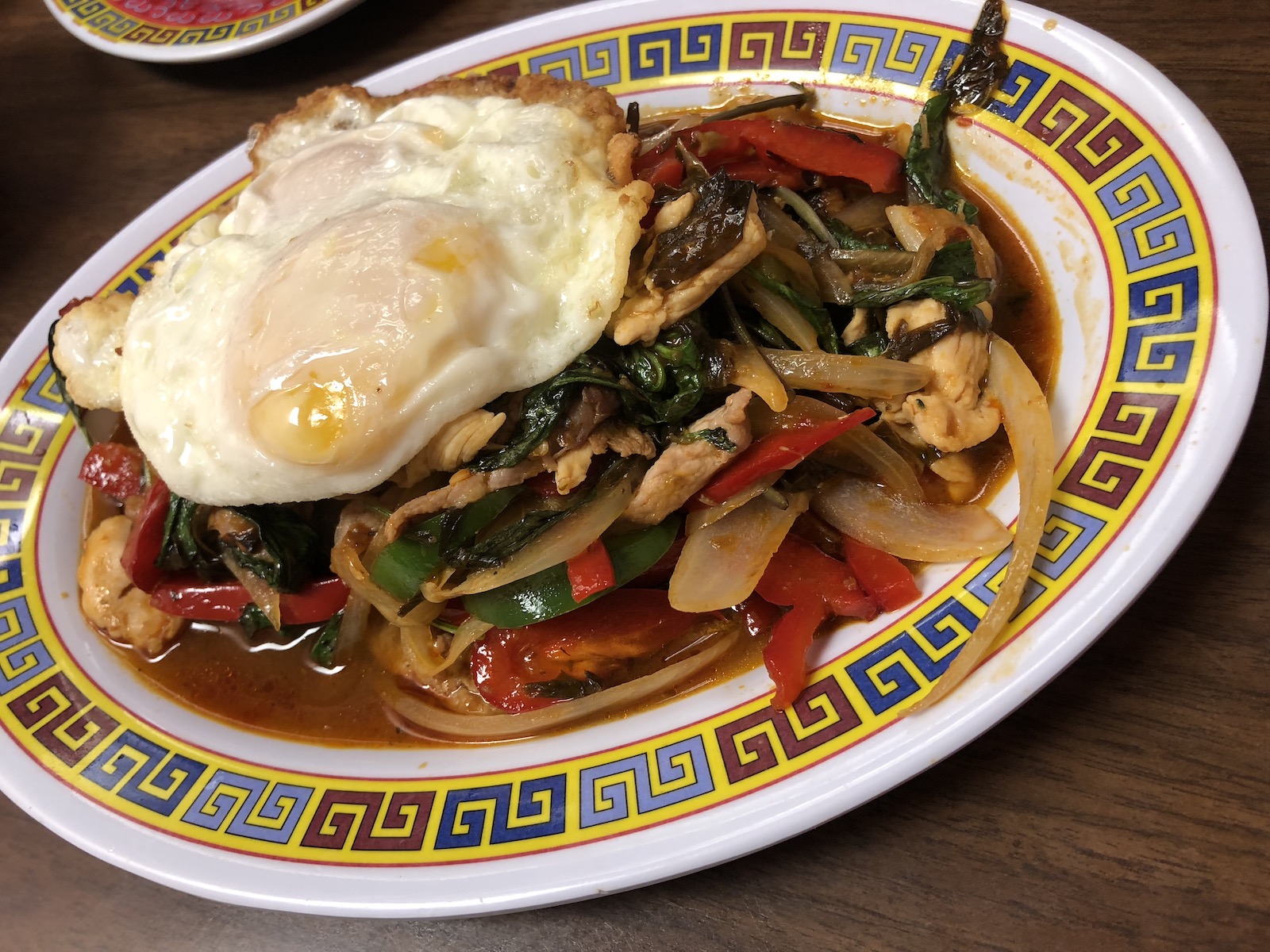 A journey to food & family

Vanmanivong credits Anthony Bourdain with bringing visibility to Lao culture and food through projects like "No Reservations" and "Parts Unknown," both of which featured insightful episodes focused on the country's history, culture and food.

"Everything he brought forth in ‘No Reservations’ took the things that were untouched in the culinary world and brought them to light," she says. "And in doing so, he brought visibility to the Lao community."

Bourdain also prompted Vanmanivong to reflect on her place in Lao culture.

"My husband and I actually went to see him in Waukegan, Illinois about ten years ago," she says. "At the time, I wasn’t working in the culinary field; but I think it really helped to spark my interest in really learning more about food and the cultural foods I grew up with."

So when her husband’s job took them to Atlanta, Georgia, Vanmanivong says she took the opportunity to attend culinary school.

"The company I worked for actually owned Le Cordon Bleu," she says. "And I got free tuition through my job. So I worked and went back to school full-time. I also got the opportunity to work with Richard Blais before he went on to Top Chef."

But the biggest lesson in her culinary journey took place after graduation when she and her husband moved back to Milwaukee.

"My grandmother had fallen ill," she says. "And I had the privilege of spending the last three months of her life with her. She was living in Rockford, and I was in Milwaukee. But I drove down to see her whenever I could, and we’d sit for hours and talk about food."

As it happens, Vanmanivong’s grandmother grew up cooking. Her father had attended culinary school and he’d taught her how to make a variety of European dishes. As a result of her skill, she was chosen to cook for American missionaries during the Secret War in Laos.

"We have photos of her cooking Thanksgiving dinner for Americans in Laos," says Vanmanivong. "And I have memories of her mashed potatoes, which she always made with a traditional kok & sak [mortar and pestle]".

"She worked as a housekeeper for a hospital my entire life," she adds. "And she was one of the most hardworking women I’ve ever known. But every time we saw her, she made us food...Food was my grandparents’ way of showing love for us and sharing our culture. I didn’t appreciate that as a child. But I understand it now."

"I wouldn’t take back those three months for anything in the world. I knew I loved food, but she made me realize that one day I needed to find a way to do something to showcase our food. It was my responsibility."

In the years that followed, Vanmanivong focused on her culinary career. In Milwaukee, she took a job working with Zak Baker at Lake Park Bistro. When her husband Alex’s job took them to Colorado, she ran a catering company in Colorado Springs, managed the raw bar at Guard & Grace and took on the challenges of butchery and charcuterie at Old Major in Denver.

When she and her husband moved back to Milwaukee, she continued her education with work at DanDan, Birch + Butcher, Snack Boys and Amilinda. But when she got a call from Alex Hanesakda of SapSap asking her if she wanted to assist him in running his pop-ups, she says she couldn’t turn it down.

"I’m in a place right now where I really am trying to determine the direction I want to go," she says. "But the opportunity with SapSap literally just landed in my lap. It gives me the opportunity to represent Lao food and culture. And it gives me a chance to share the things that my grandparents shared with me with a larger audience."

Vanmanivong says she’s most excited to introduce Milwaukeeans to the khao poon, a soup which incorporates a long-cooking fish stock and curry.

"It’s all about time," she says. "The curry cooks for a couple of hours, until it’s just the right color. And then you marry the stock and the curry together with aromatics like lemongrass, lime leaf and proteins. You add creaminess with coconut milk… and then there’s the freshnes of the lime, the fresh cabbage, the mint and bean spouts…"

"I love our soups," she says, noting that soup brings her back to memories of family. "We’d frequently get together and make a huge stock pot filled with soup. When we were kids, we loved the add-ins that we could put into the soup. We’d always put extra peppers into our soup and try to out-spice one another. There’s a saying in Laos," she adds, "It’s ‘Baw phet baw sap’ and it means ‘If it’s not spicy, then it’s not delicious.’"

Vanmanivong says she’s excited to embark on the next leg of her culinary journey.

"I’ve been cooking other peoples food at other peoples’ restaurants for a very long time," she says. "So I can’t wait to be creative and cook my own food." 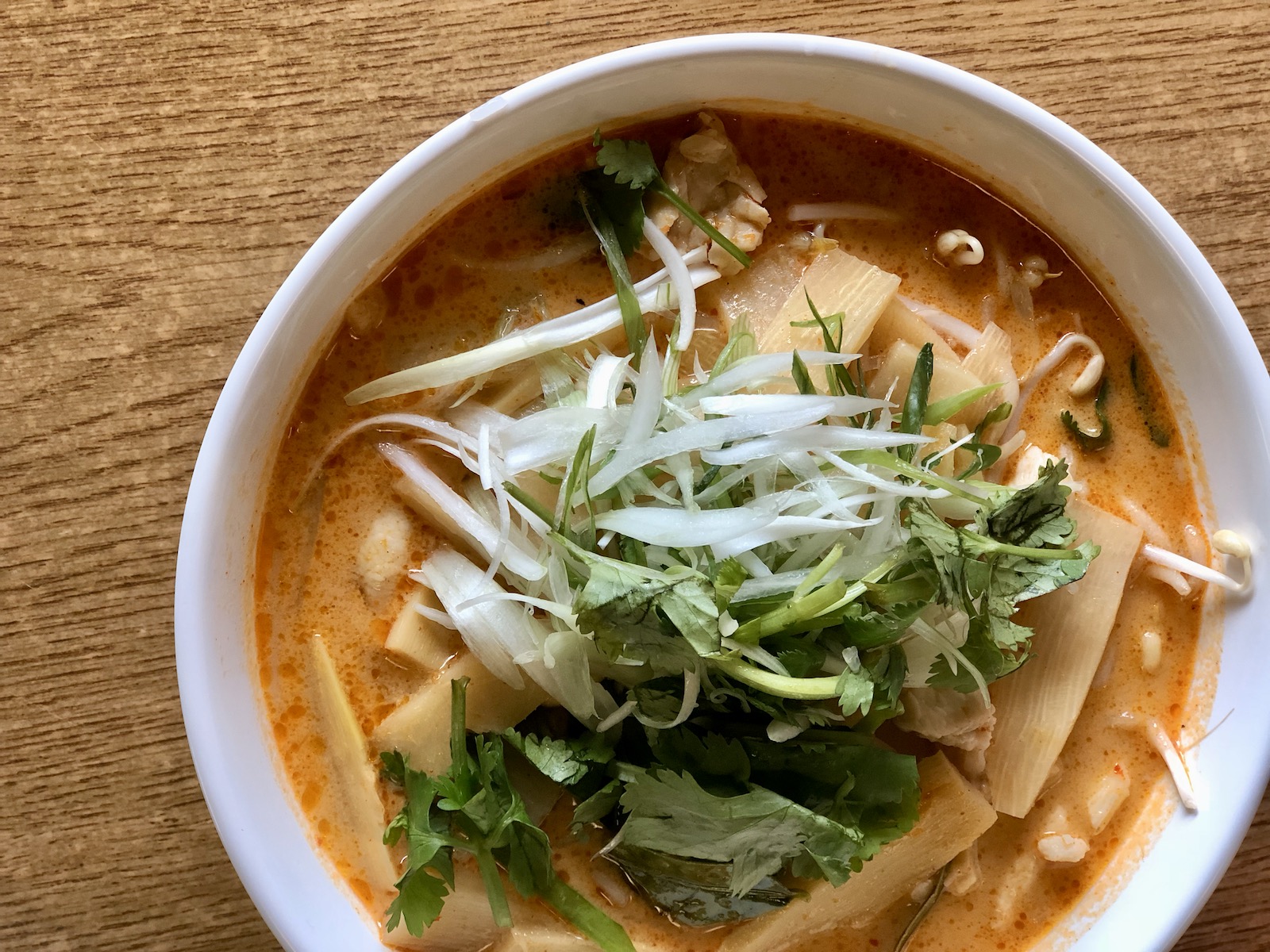 Guests will also have the first opportunity to taste and purchase Jeow Som, SapSap's new Lao hot sauce. The sauce, which we sampled in November on our FoodCrush podcast is savory and not shy on flavor or heat. In fact, it’s delicious on (dare I say?) just about anything, made from a combination of Thai chilies, garlic, lime, ginger and fish sauce.