The ancient Greek tragedian playwright Sophocles once wrote about losing, "I would prefer even to fail with honor than to win by cheating." Alas, no one told that to the Hot Dog before the Miller Park Sausage Race on Tuesday.

The ancient Greek playwright Sophocles, a tragedian well-versed in the methods of misfortune, once wrote about losing, "I would prefer even to fail with honor than to win by cheating."

Alas, no one told the Hot Dog, who neither failed with honor nor won by cheating in Tuesday’s Sausage Race at Miller Park. Prior to the seventh inning of the Brewers’ 2-1 loss to the Giants, the Famous Racing Sausages competed in their regular dash – an exciting and heated contest that, during the team’s rebuilding season, might be the highlight of the game.

On Tuesday night, the Hot Dog sprinted out to a huge lead, perhaps as many as 15 foot-longs in front of his nearest challenger, delighting the 24,000 spectators with his dominating encased-meat athleticism.

But down the home stretch, with the grilled scent of smoky victory within sniffing distance, the unthinkable happened. In a cruel, "Cool Runnings"-esque twist of fate, the frontrunner, suddenly drained and (hot) dog-tired, inexplicably lost his footing and fell down, face-planting not only into the dirt track but also into the heartbreaking history of all-time Sausage Race defeats.

ICYMI: A wiener took a tumble.https://t.co/DVX3j7cfWs

In their unwieldy costumes – or artificial casings, as they're called in the sausage game – the wieners are about 7-feet-3, or approximately the size of Knicks rookie sensation Kristaps Porzingis. There can be no doubt, however, that, after such an anguished downfall, the Hot Dog was feeling as small as a bottle of Miller Park’s Secret Stadium Sauce.

Taking advantage of the last-second collapse, the Brat crossed the finish line for the improbable victory, preventing the Hot Dog from winning the first two Sausage Races of the Brewers’ 2016 season.

The Hot Dog could not be reached for comment, but OnMilwaukee’s Matt Mueller, a former Racing Sausage competitor who has chronicled the grueling life of being a giant tubular meat runner, offered his thoughts on the unbelievable events.

When asked what the Hot Dog’s emotions must be like following his embarrassing loss, Mueller said, "Embarrassed. As one who never got that close to winning a race, I can't even imagine what that must have felt like." 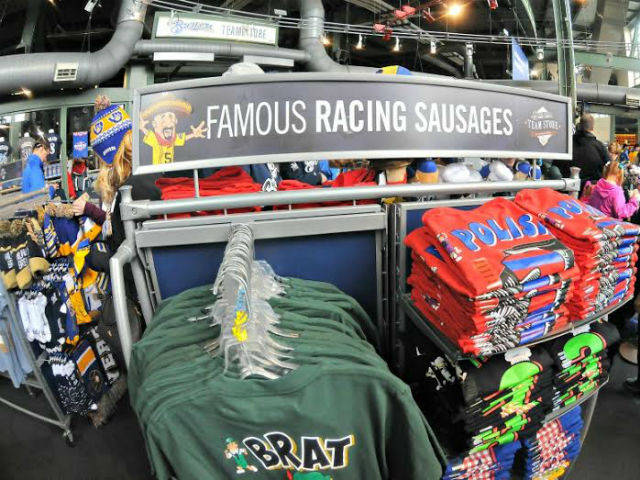 Meanwhile, the voting for both political parties’ presidential primaries in Wisconsin also took place on Tuesday, with Ted Cruz prevailing over Donald Trump and John Kasich in the GOP race and Bernie Sanders beating Hilary Clinton in the Democratic race – contests even Sophocles would no doubt struggle to endear with his eloquent rationality.

But incontrovertibly, the biggest loser of the day’s most important race was still the Hot Dog.

Yesterday's Brewers sausage race came with an even better backstory

Brewers On Deck canceled for 2021