You might not know that this creek runs under your neighborhood

Many people - including me - only know Schoonmaker Creek as what looks more like a culvert running through the Washington Highlands. But it actually originates a few miles to the northwest, hidden from view. A meeting this week discusses ideas on how to prevent it flooding.

Once, in an airport, I found a book about the London waterways that had disappeared from the landscape – by diversion into underground pipes, by being built over, dammed up, filled in, whatever – and found it fascinating – and not a little mysterious – to think about how little we sometimes understand the landscapes we inhabit. 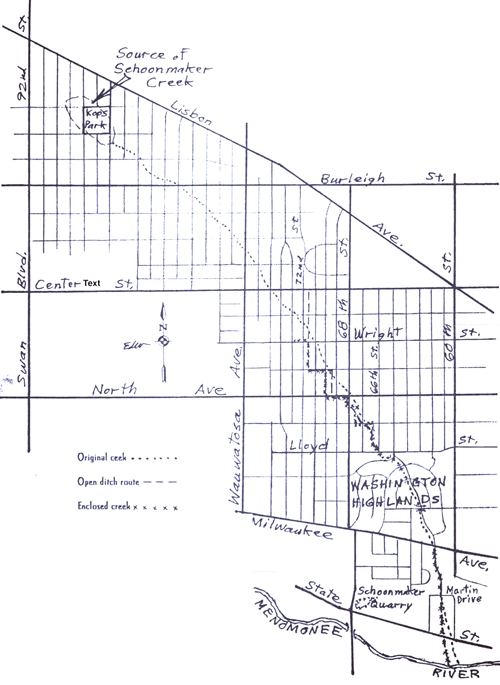 Closer to home, though an elderly woman who lived her entire life in my neighborhood once told me of a creek that I thought she meant ran through where our alley is now located, I had no idea there was an underground waterway still winding through part of my neighborhood.

Maybe she was talking about Schoonmaker Creek.

Many people – including me – only know the creek as what looks more like a culvert running through the Washington Highlands. But it actually runs for a few miles to the northwest, hidden from view.

Schoonmaker Creek – a tributary of the Menomonee River named for Wauwatosa quarry owner John M. Schoonmaker, who owned the Silurian fossil reef that bears his name and that runs along Martin Drive from 64th to 66th Streets – originates in a swampy area beneath what is now Kops Park, which is bounded by Townsend, Concordia, 86th and 88th Streets. 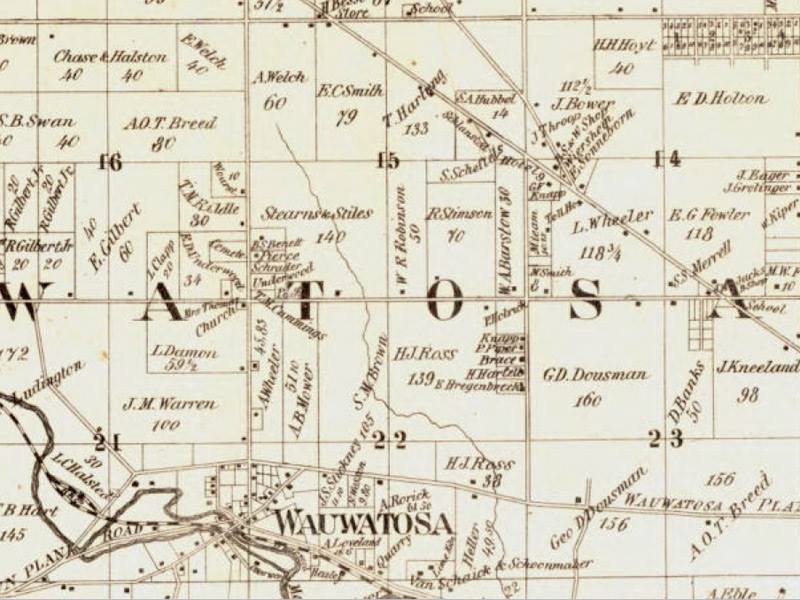 You can see the source of the Schoonmaker on land owned by an A. Welch,
when this 19th century map was drawn. (PHOTO: Pinterest)

It runs southeast through the northeast corner of Cooper Park neighborhood, down through the southwestern part of Enderis Park, through Tosa’s East Tosa, Pabst Park and the Highlands before joining the Menomonee River south of 60th and State Streets, at Jacobus Park.

"Northeast, northwest and southwest was higher ground," wrote Ed Wilkommen in "Historic Wauwatosa, "so that runoff water had to flow southeastward. When this water reached the vicinity of what is now 66th and Lloyd Streets, it was stopped by a high east-west ridge we now call the Washington Highlands.

"A lake formed some 40 feet deep, back the water all the way to near what is now 81st and Burleigh Streets. When the water reached this depth it flowed over the top of the east-west ridge and ran southward into the Menomonee River. It took eons of time to slowly wear down this ridge and form a typical V-shaped valley in the former we now see."

In the early 20th century, there was a footbridge over Schoonmaker Creek between 69th and 70th Streets, Wilkommen reports, adding that the creek was diverted, "along the south edge of North Avenue to 68th Street, where it turned south for 180 feet, then southeast in a ditch to the intersection of 67th Street and Garfield Avenue. It then angled under this intersection in a culvert, continued southeast in a ditch and ran down the back part of the lots on the west side of 66th Street.

"This necessitated small bridges over the creek so that the property owners could have access to the rear portions of their lots. The creek water went under Lloyd Street at 66th Street in a concrete culvert, and out into the open as it entered the Washington Highlands." 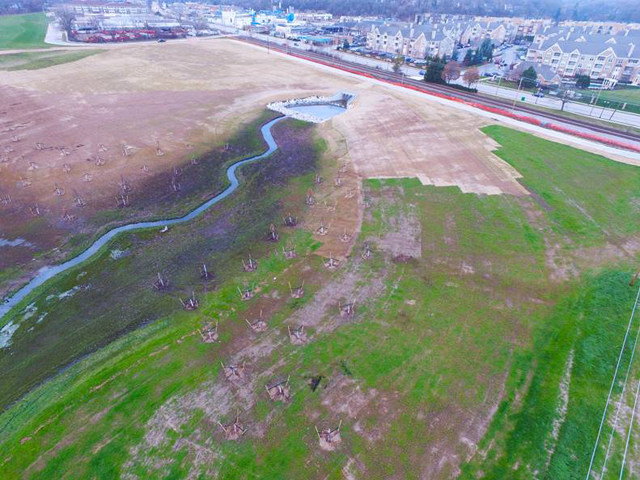 In the 1920s, some of the creek was diverted into ditches along the back lines of newly platted lots. In the 1930s, the creek was run into storm sewer pipes as neighborhoods along it developed.

Schoonmaker flows in an open channel through the Highlands and in 1939 was diverted back into subterranean pipes at Vliet Street that sent the water into the Menomonee River.

In 2015, MMSD "daylighted" the portion of that section from the railroad tracks running along State Street to the Menomonee River, near Jacobus Park. 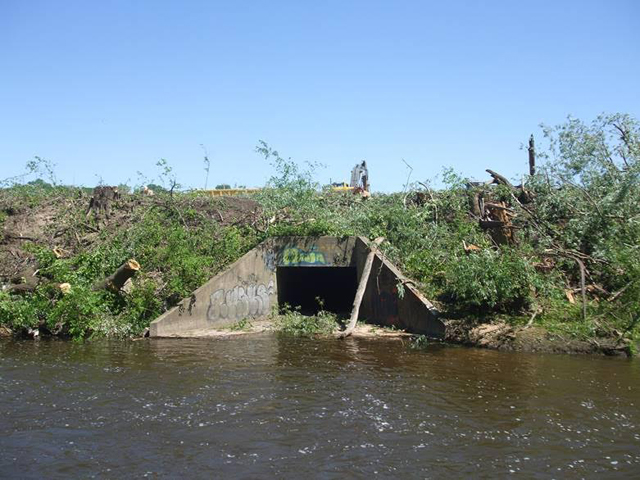 Before daylighting (above) and after (below). (PHOTOS: Milwaukee Metropolitan Sewerage District) 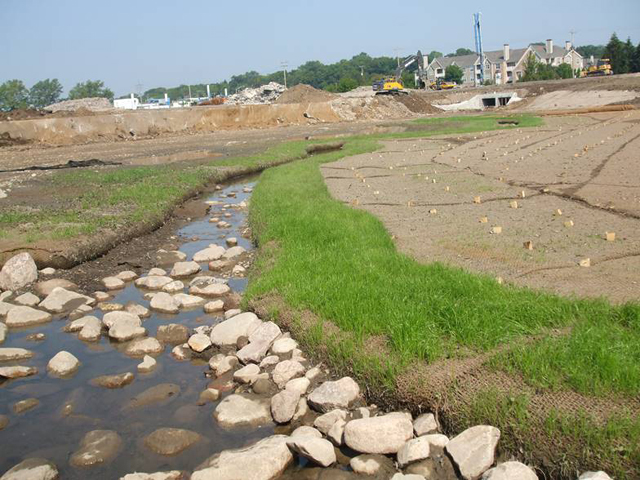 There is a map being circulated that shows the creek’s path in advance of a Nov. 13 open house, from 5 to 7 p.m., at the Wauwatosa City Hall on 76th and North.

The event, held by the City of Wauwatosa, MMSD and Southeastern Wisconsin Regional Planning Commission is focusing on the East Tosa Schoonmaker Flood Study.

According to the flyer:

"The extreme rain events of 2010 caused flooding throughout Southeastern Wisconsin, including Wauwatosa. The City of Wauwatosa, MMSD and SEWRPC have been working together on a comprehensive study to understand what possible investments in infrastructure could mitigate this flooding from reoccurring."

At the open house, SEWRPC will give a presentation on the history of the flooding and infrastructure alternatives that could prevent future flooding. Written comment from the public will also be solicited at the event.

"Please note," reads the flyer, "there are no recommendations as to how to proceed at this point in the study process."

Flooding, according to Wilkommen’s history of the creek in "Historic Wauwatosa," has long been an issue for landowners and residents along the creek.

"As part of the a large storm sewer project ... the creek was put into (large-size storm sewer) pipes in 1935," he wrote. "Along North Avenue the pipes were laid along the south edge of the street, then they went along the east edge of 70th Street to Meinecke, the south edge of Meinecke Avenue to the lot line between 71st and 72nd Streets, and north along said lot line. Later, in cooperation with the City of Milwaukee, a large storm main was laid under Center Street to further drain this area."

If you’re interested in the Schoonmaker and ideas for abating flooding related to it, go to the meeting to learn more and make your voice heard.