Selena Gomez reveals her "Revival" at the Marcus Amphitheater

If Selena Gomez aims to shed that baby face and Disney image, her "Revival" tour is certainly doing just that. The black bodysuits, whipping hair and sultry scowl all make it clear this is a woman moving on from her past, and that sweet innocent girl isn't coming back.

If Selena Gomez is aiming to shed that baby face and Disney image, her "Revival" tour is certainly doing just that. The black bodysuits, whipping hair and sultry scowl all make it clear this is a woman moving on from her past, and that sweet innocent girl isn’t coming back.

You saw peeks at the girl that was the princess that everyone knew and loved. She'd show a bit of excitement, flash a rare smile or have a moment with one of her dancers that you knew they’d be lol-ing at if they weren’t on stage.

The moment Rihanna’s voice boomed "This is what you came for" across the Amp, we knew that Selena would be bounding out to meet us soon. And that she did. She started with a gentle tease, behind a sheer blue curtain sharing that this was indeed her "revival." Then, finally, she revealed her new self to the generally female crowd.

And this crowd roared at the new Selena – the slinky, sexy one. She’s done with that "Same Old Love," but her fans are not. She may have been left in pieces, but she's building herself back up, while building the crowd up, too.

Fans kept her hair blowing perfectly (oh my, those extensions!), and she broke into "Come & Get It" to the crowd’s delight. She took a moment to welcome her fans and thanked us for being there and a part of her revival, as well as describing how very much this album means to her. 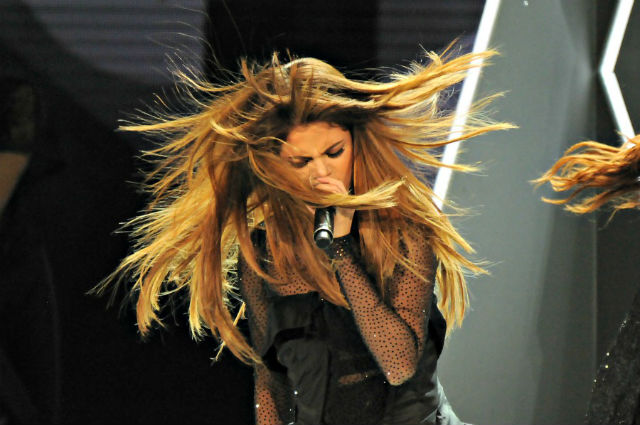 Selena knows the drama we’ve seen her go through and all of the ups and downs. It’s part of why the Amp was sold out (though, as far as we could tell, no lawn seats were sold as part of this tour).

She shared all her feelings in "Sober" and the hold Justin Bieber's had on her and the wasted dreams of the past, before sauntering off stage during a video interlude and costume change.

After gorgeous videos that others loved but I could have done without, a dominating Selena took the stage. The night's first serious pops of color filled the Amp with a brilliant red, as she shared that she’s a 14 carat and dressed up real nice just for us. No more wide-eyed girl here; she's "Good For You."

Some of the moments I loved the most were when you could feel the happiness breaking within her from the sleek and shiny show and she’d crack a rare smile. Her entourage of dancers joined her for "Survivors," singing of scars and what was once hers is now theirs.

A visit to happier days took us back to "Slow Down." Later, Selena joked about how hot it was here in Wisconsin – even for a Texas girl. She endeared herself to the crowd by sharing that she didn’t learn to snap until she was 13 – and asking the crowd to help her do it – because she couldn’t keep her "Hands to Myself."

Selena slowed it down and did a bit of a "Transfiguration" herself with a powerful yet intimate moment on the piano, while her dancers showed the visual push and pull of the emotions in a Hillside United song. She shared that it's funny how people can get more insecure as they get older, opening up a new side of herself to the crowd.

Red roses bloomed from the crowd, literally, as the music pumped for "Me & My Girls" and she rode in on a chariot. She sang of never feeling more alive, shaking it, the heat of bodies and burning up. We feel you, girl.

A cover of Eurythmics’ "Sweet Dreams" led her once again into talking about life, lessons and thankfulness. Then she launched into "Kill Em With Kindness," one of my favorites from "Revival." This Selena seemed so very self aware, so connected with emotions and with the crowd.

Closing with a remix of "Revival" seemed fitting, somewhat a full circle to how we all started the night together. I may have – OK, I did – go into this show wanting a Selena and Biebs reunion on the stage, for them to announce their love once again and live happily ever after. But after seeing her moments of redemption and her eloquently singing, "I’m reborn in every moment/So who knows what I’ll become?" that romance had indeed changed as well. I think I love this Selena even more.

As for the opener, DNCE brought front man Joe Jonas on lead vocals, ex-Semi Precious Weapons’ bassist Cole Whittle, drummer Jack Lawless and kickass guitarist JinJoe Lee. It looked like quite the workout and included party tunes like "Cake By The Ocean" and their newest single, "Toothbrush." They also did covers and mixes that included TLC’s "No Scrubs" and a Prince/James Brown mashup of "Kiss" and "Get Up (I Feel Like Being a) Sex Machine."