Recently, reader Katie McMahon asked about the columns that appear on the corner of Shepard Avenue and Locust Street on the East Side, reminding me that like Katie and likely you and most everyone that's ever seen them, I've been curious about them.

Recently, reader Katie McMahon asked about the columns that appear on the corner of Shepard Avenue and Locust Street on the East Side, reminding me that like Katie and likely you and most everyone that’s ever seen them, I’ve been curious about them.

While the taller brick posts – one flanks each side of the street at the entrance to the 2900 block of North Shepard Avenue (named for Clarence Shepard who owned a farm in the area) – seem like they might have once held gates, there are no signs in the masonry of the remnants of any such use. 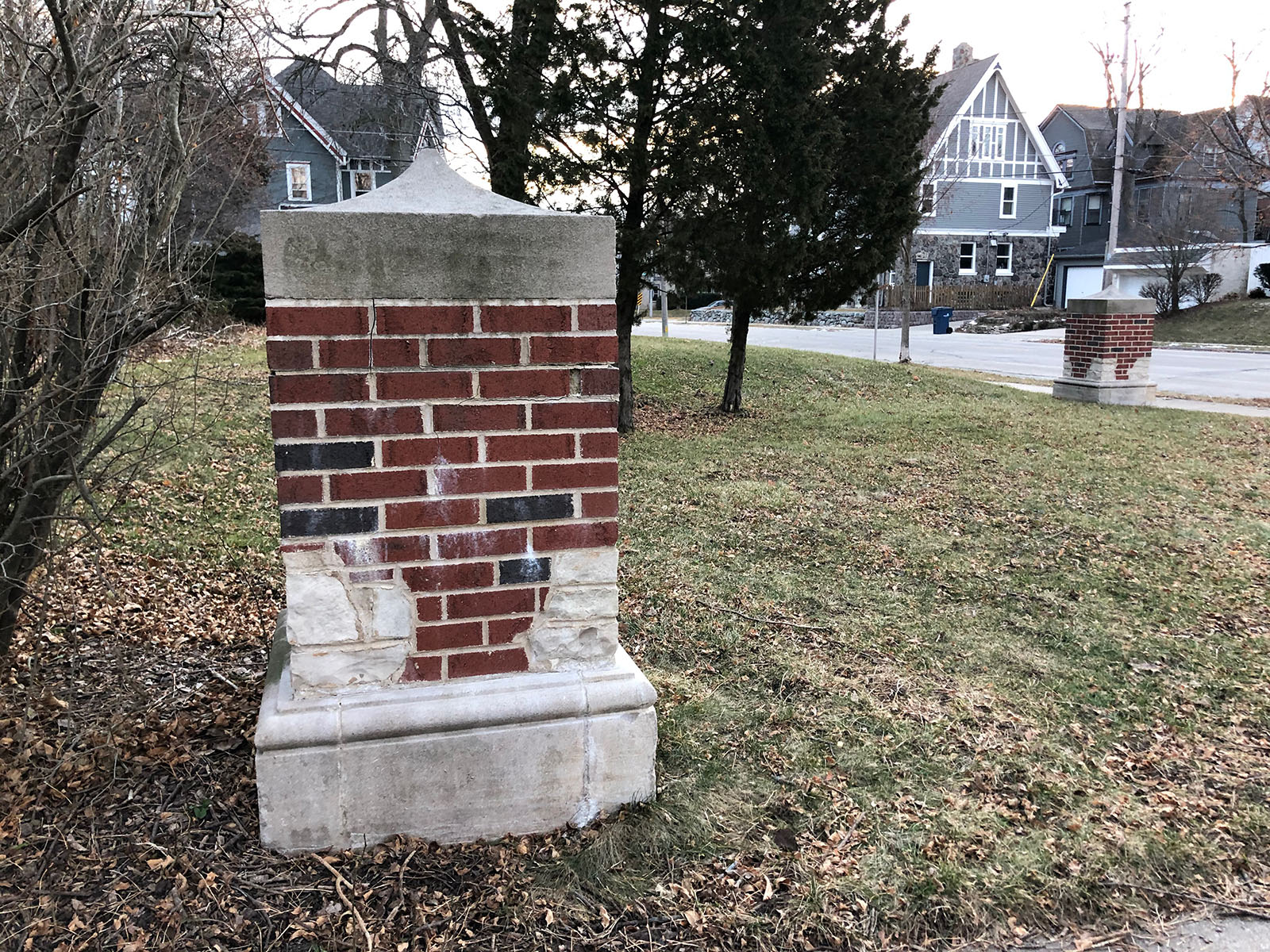 What’s even more interesting is that a matching small post sits across the sidewalk from each of the tall posts. And, oddly, two more small ones are a few yards from each corner on Locust Street.

Facing the corner, at a diagonal, are short staircases on either corner, too, a few yards from the sidewalk. 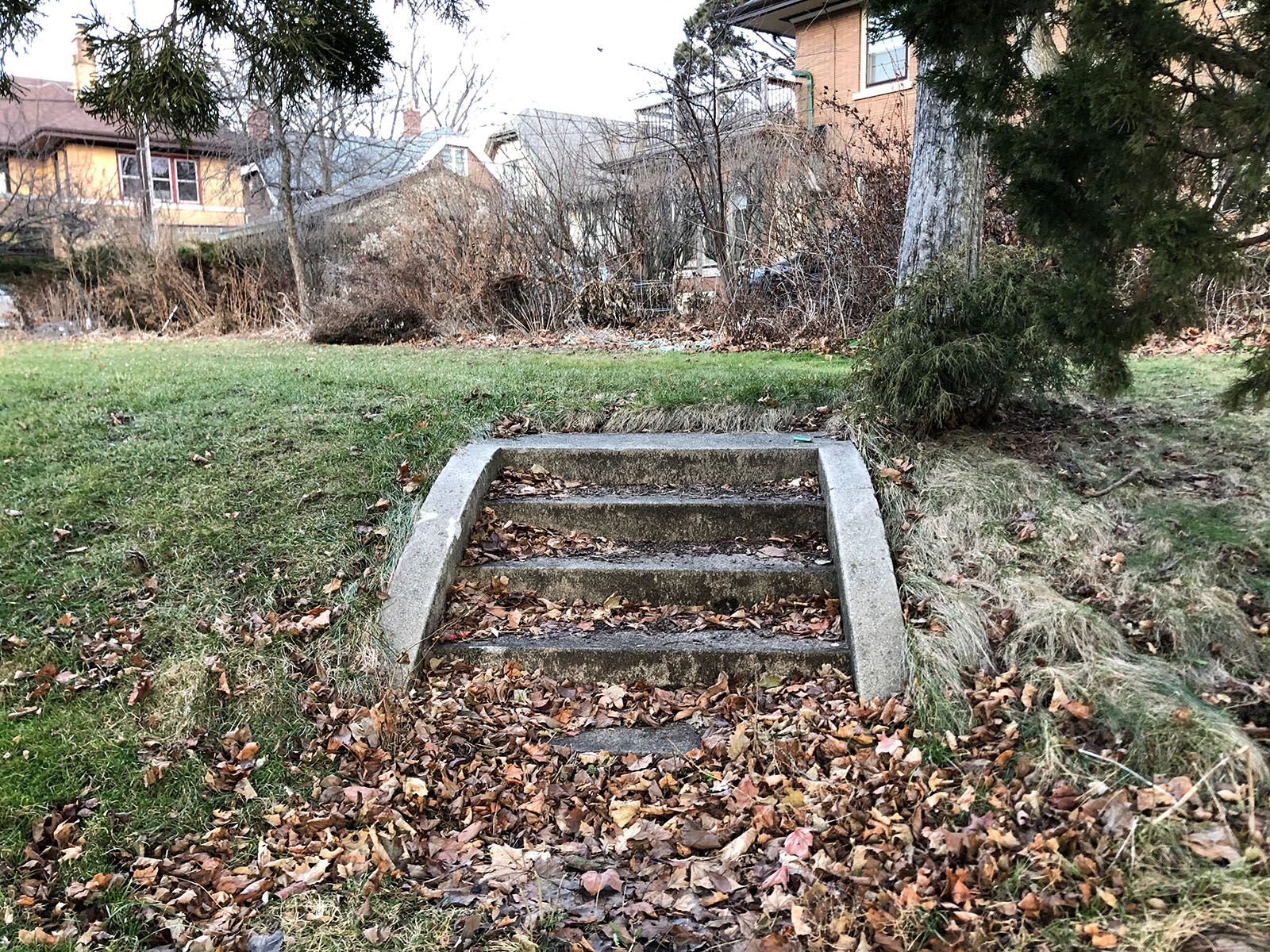 Another pair of tall posts sits on the northern end of this block, too. But that corner has none of the stairs or small posts.

I checked the 1910 Sanborn fire insurance map, which shows that most of the homes on the west side of this block were already constructed, but that only a couple were built on the east side. 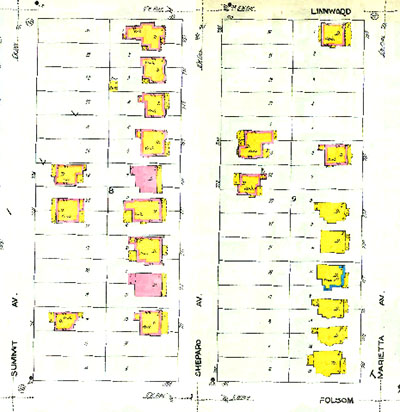 Nowadays, both sides are built up, but the corner lots, where the short staircases are located, remain unbuilt.

Those lots, Manager of Central Drafting & Records at City of Milwaukee Yance Marti tells me, are owned by the city.

The map doesn’t show the posts, but it’s not clear that Sanborns would record such structures.

However, a 1924 City of Milwaukee paving plan clearly does show all six pillars as well as both of the staircases. Plus, it demarcates paths that lead to the staircases and explain why those two small pillars seem to be floating out there along Locust Street. They marked the spots where the paths met the Locust (then Folsom) Street sidewalk. 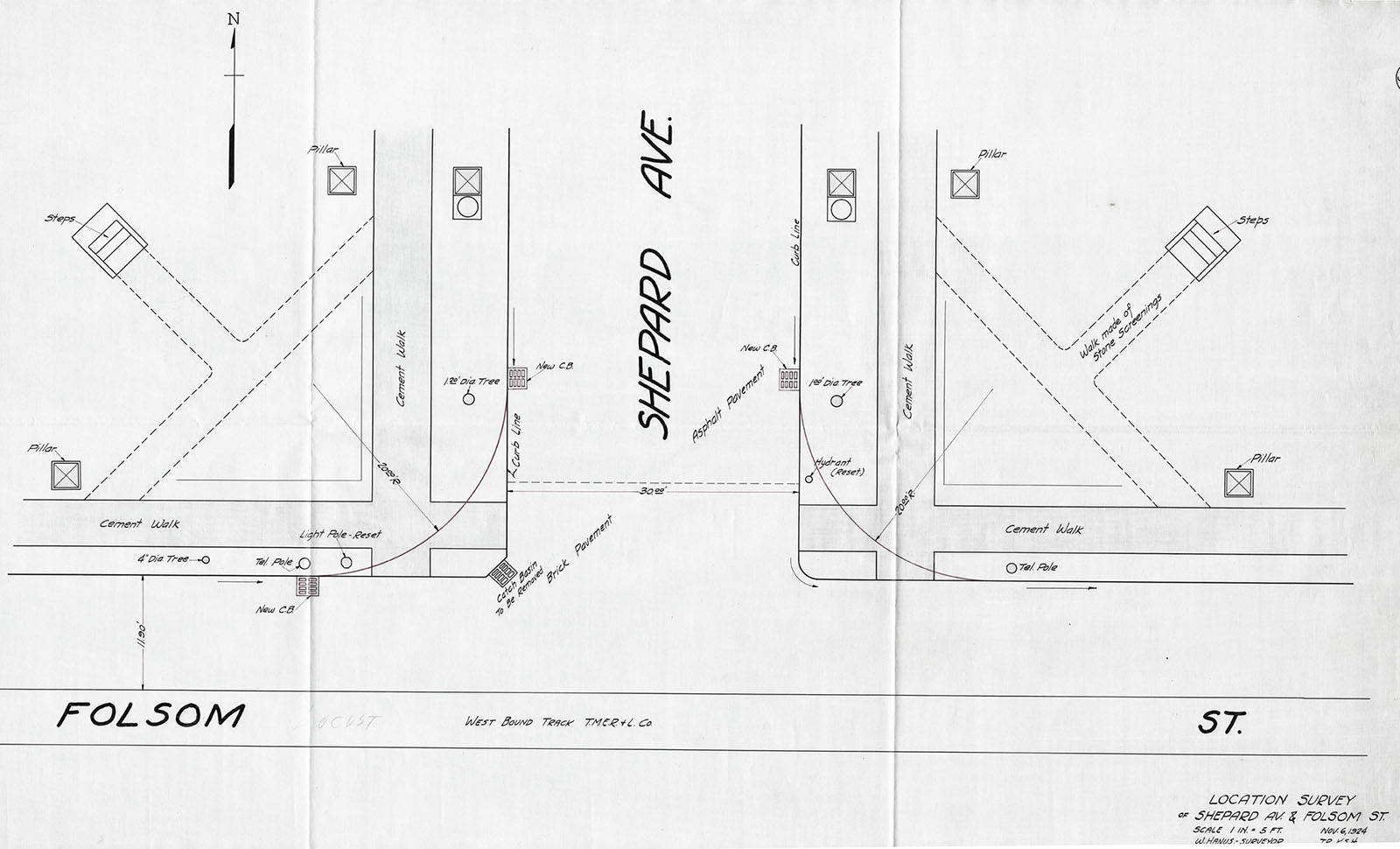 The steps seem to suggest that something was located on those city-owned corner lots, and anecdotal evidence suggests there were flower beds at the top of each staircase.

The pillars, says Marti, are located in a city right-of-way and, therefore, should have been subject to the approval of an ordinance at some point, but I’m still digging for that.

But the map suggests the pillars have been a fixture on the East Side for a century now.

Marti suggests one explanation for the columns is that they could’ve been part of a passion for architectural follies that dated to the 18th century and often had builders erecting fake "ruins."

"Sham ruins enjoyed a long history. It’s tempting to imagine that by the 20th century, more false ruins dotted the European landscape than real ones," wrote Paul Cooper in The Atlantic.

"The eccentricity and vulgarity of these ruins – not to mention the arrogance of their creators – can be striking. The wealthy aristocrats of old Europe often used these monuments to imagine themselves as a new kind of God, remaking the world as they wanted and creating a false impression of a history that never was."

But, I think Marti’s other scenario feels more likely. 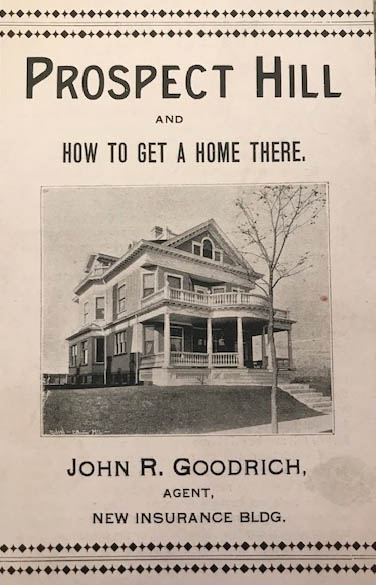 The block is part of the Prospect Hill subdivision – which I wrote about in this recent article – which was no stranger to marketing, as you can see from these photos of a brochure it produced at the turn of the 20th century, and was certainly aiming for monumental charm, comparing itself to Richmond, Virginia’s historic Court End neighborhood.

"They may have been put there as some special marketing gimmick," suggests Marti, who is also the author of the book "Wicked Milwaukee."

"It seems like a marketing ploy to make that block seem exclusive and the lots could be sold for more money. 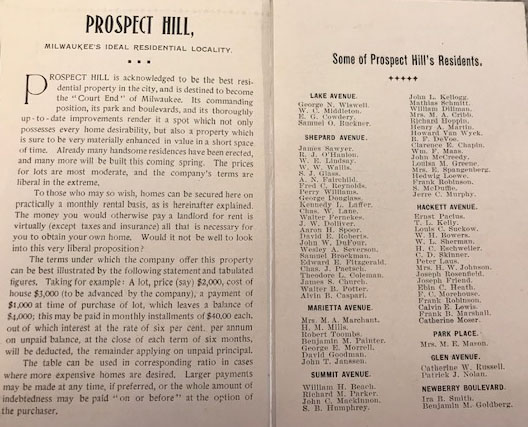 And, I stand with Yance on this one.