Shorewood teen stands up to angry adult after peaceful protest

When 14-year-old Isabella Busby showed up with her family to participate in a peaceful protest in Shorewood, she had no idea she would have to literally stand up for her rights.

When 14-year-old Isabella Busby showed up with her family to participate in a peaceful protest in Shorewood, she had no idea she would have to literally stand up for her rights following the nine-minute "kneel in."

The event, called "Kneel For Nine," took place in two locations on Tuesday, June 2 at 5:30 p.m. Several hundred people gathered at Santa Monica and Hampton Avenues in Whitefish Bay as well as at Wilson and Capitol Drives to kneel for nine minutes to honor the life of George Floyd and peacefully protest the police violence that ended his life in Minneapolis on Memorial Day, May 25. 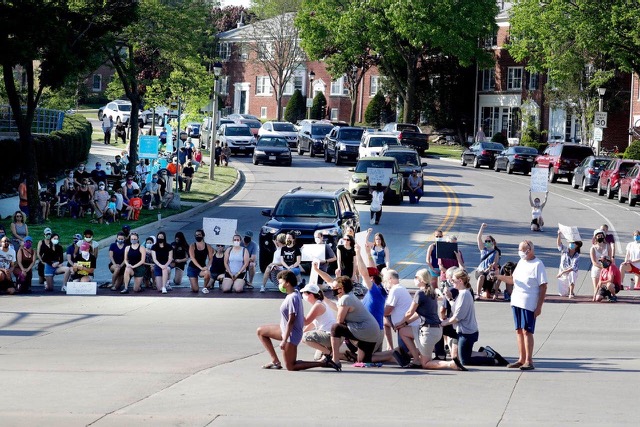 Shortly after the group knelt – both on the sidewalk as well as in the street – a man approached the crowd, yelling that they were "disturbing American citizens lives" through their actions.

Busby, who was one of only a few African Americans in attendance at the North Shore protest, found herself face-to-face with the man for more than five minutes while he continued to yell about his personal situation and how it was adversely affecting his life.

"After nine minutes of kneeling, and trying to imagine what it felt like to be George Floyd with a knee in his neck for that amount of time, I felt so angry that someone who would never have to worry about losing brothers or uncles or aunts this way just didn't sit well with me," says Busby. "I had to stand up for all the years my grandparents and their grandparents have been fighting just to be treated like human beings and nobody has listened."

Eventually, Shorewood police arrived on the scene and asked the man to move along, who complied.

"I am so incredibly proud of Bella," says her mom, Abigail Fowler, who attended the protest with her daughter and son.

Busby, who is about to graduate from Shorewood Intermediate School and will attend Shorewood High School in the fall, says she would definitely stand up for African Americans' rights and against systemic racism again.