After what seems like an eternity of lawsuits and proposed locations, Silk Exotic strip club finally swung open its doors this week Downtown at 730 N. Old World 3rd St.

After what seems like an eternity of lawsuits and proposed locations, Silk Exotic strip club finally swung open its Downtown doors this week at 730 N. Old World 3rd St.

The opening brings exotic dancers back to the 700 block of North 3rd Street, which – thanks to Izzy Pogrob’s Brass Rail (a couple doors north of Silk), the Princess Theater (right next door) and other venues – has a long tradition of such nightlife. 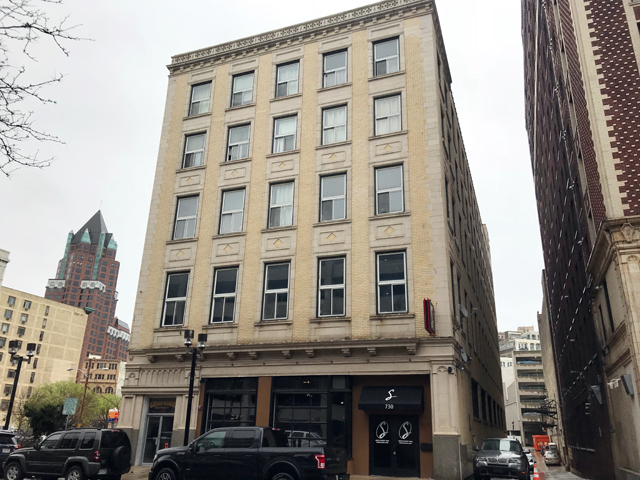 The club occupies the ground-floor space of a five-story Neoclassical building designed by Chicago’s Holabird and Roche as an annex to the Hotel Wisconsin – which the renowned architectural firm also drew.

Built in 1925, the structure – erected by W.W. Oeflein construction – has some nice terra cotta details and a few Gothic motifs on the street-level facade. The cornice has a string of quatrefoils running the length of the building. 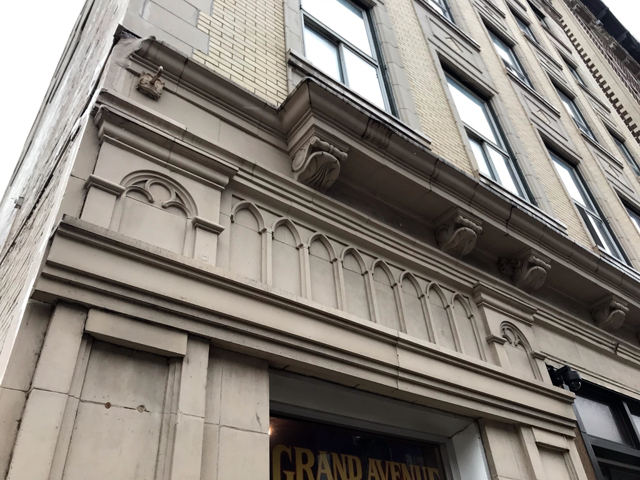 An existing brick building built at some point before 1892 (at which time it was altered) – home to the Central Drug Co. since at least the dawn of the 20th century – was razed in spring of 1923 to make way for the annex, which in its earliest iteration was to be a 250-room expansion of the main hotel building, on the site of the current building and the alley.

When the plan was scaled back in 1924, the idea was then to connect to the main hotel building via a skywalk spanning the alley in-between, but that doesn’t seem to have ever materialized, either. The initial permit was for a three-story building, but a few months later, the Hotel Wisconsin Realty Co. returned to City Hall for a permit to add two more stories. 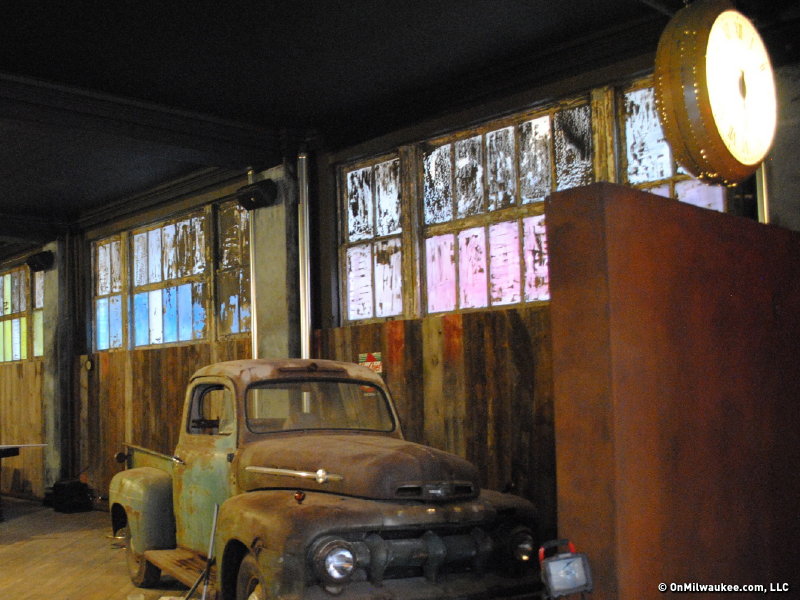 According to a worker, the truck was driven into Rusty Old 50,
which featured large garage doors.(PHOTO: Molly Snyder)

For many years, the upper floors have been home to the Grand Avenue Apartments, while the retail space has been empty for a few years, after having been home to bars like, most recently, Rusty’s Old 50. Before that the Velvet Room had a 10-year run in the space that ended in 2006 when owner Mike Kozak rebranded it as Martini Mike’s (pictured in a Josh Martines photo below). 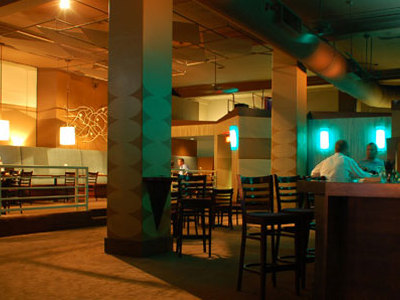 Interestingly, either the ground floor was sliced up a bit in the past or there was commercial space upstairs (or down) because for many years, 734, which is now strictly the entrance for the upper floors, was home to businesses like clothing stores and, perhaps most notably, Tutz’s jazz club and cocktail lounge was located there for a few years before moving up to 744 N. 3rd in 1955.

You can read more about the Brass Rail, Tutz’s and even see a Princess Theater photo that includes a sliver of the Silk building here.

A 1943 permit to convert all the upper floors to apartments notes that the first floor was "stores," while the second had offices and a hall, with storage on the floors above. The transformation was completed the following year. 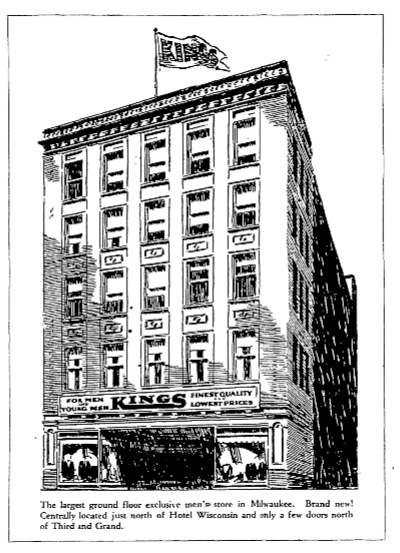 Earlier in its life, the ground floor was home to places like King’s Metropolitan Clothes (late 1920s) and Wynn’s clothing store (early ‘30s).

When King’s opened in the building in August 1926, an advertisement boasted that it was "the largest ground floor exclusive men’s store in Milwaukee. ... It will be to Milwaukee what the Furniture Mart is to Chicago, a great big central buying place where every man can get just what he wants at the price he can afford to pay."

In the mid-1930s, the owners of the hotel, including the annex, were struggling and sold to the Schroeder Hotel group. In 1934, a newspaper report noted that the annex, "a building across the alley to the north from the hotel ... never returned sufficient income to meet taxes and ground rental. ... The property was termed a liability of the Hotel Wisconsin Realty Co." 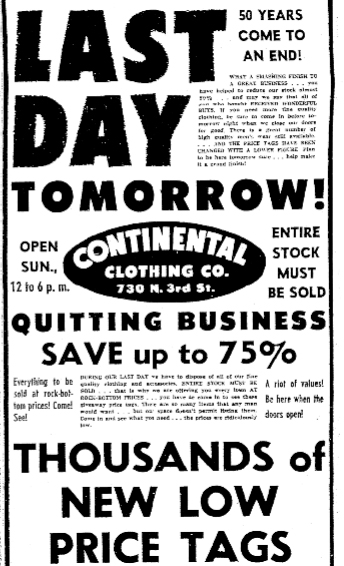 But business went on, and Continental Clothing moved in and had a long run there from this time until Feb. 2, 1958.

In September 1958, the USO moved its headquarters to the retail space at 730, holding a ribbon cutting that drew about 250 servicemen, according to one newspaper report, as well as members of groups who partnered with the USO.

"Tension mounted as the snippers, with their scissors poised, were placed by photographers," the paper noted. "The tension evaporated, however, when an excited matron prematurely cut the tape. There was a delay while a hastily appointed repair crew pasted the ribbon together. On the second try, the six scissors snipped as one, and as the ribbon fluttered to the sidewalk, the eager servicemen rushed inside to watch the crowning of their newly elected queen."

That regent – 19-year-old Patricia Silke – was elected by USO hostesses earlier in the week.

The USO headquarters boasted a radio, a television, a juke box, a library and table tennis and billiards, as well as a snack bar and "a record room, where hi-fi enthusiasts can listen to anything from classical music to Dixieland jazz."

"But the change of location is the biggest improvement," said Milwaukee County USO Director John A. Strobel to an unnamed reporter. "At our old location at 607 N. 6th St., we were much further from Downtown. Here we should draw more servicemen. Also, the new building is laid out better. Before we had three old stores, linked together with connecting archways. Now we have one big room. It looks bigger, brighter and is more convenient."

The USO would continue to serve active military members – most up for the day from Great Lakes Naval Training Center in Illinois – through 1978.

After apparently sitting vacant for a few years, the retail space was occupied from the summer of 1982 by The Penny Wise Shop – run by the Junior League of Milwaukee – which sold "designer clothing and exquisite housewares at exceptionally low prices!" to raise funds. The shop, which had previously been at 608 N. Broadway, had short tenure on 3rd Street, as classified ads throughout 1984 advertised the space as available for rent.

The Social Development Commission had applied to open a daycare there that year, a request that was denied by the city because it did not adhere to appropriate zoning uses.

In 1987 a short-lived deli called Pastrami Plus occupied the space but by the following year had given way to Metro Cafe, which served food, drinks and jazz.

"The lovely Metro Cafe was every bit as smugly hip as the name implied when it opened last week," wrote Tina Maples in the Journal is September 1988. "Done up in tony, industrial art-deco, the gray-mauve Metro boasts two bars, a dance floor after 9 p.m. and a complete menu until 11 p.m."

By 1997, it was gone and replaced with the Velvet Room, which many of you likely remember.

Now, new life for the retail portion of 730 N. 3rd St. begins with Silk Exotic’s opening. And it just might be one that at least some of those 250 servicemen would have found worthy of a visit. Except maybe the hi-fi enthusiasts.