Take one final look inside the Sisters of St. Francis chapel before it's gone

Recent news that the 1894 Erhard Brielmaier Sisters of St. Francis of Assisi is now due to be torn down because of the costs of upkeep and building a new entrance led me to return to this article about my 2012 visit to the chapel and its reliquary. When you're done reading it, you might want to read this post from my visit in August to the other buildings in the complex that are due to be razed. At the time of my visit, there was no plan – at least no public plan – to demolish the chapel.

While my visit to the St. Francis complex that is home to the Sisters of St. Francis of Assisi didn't uncover any evidence of tunnels and caves on the southern end of Bay View or anything like that – not that I necessarily thought it would, mind you, but, hey, you never know! – I by no means left disappointed.

In addition to getting a tour of the community, which was founded on the site in 1849 – yes, 1849 – I got to meet Sister Clare Ahler OSF, who is as a sweet a person as you'll meet and, lest I forget, I got to see a fragment of the veil of the Madonna, Mary, the Mother of God. 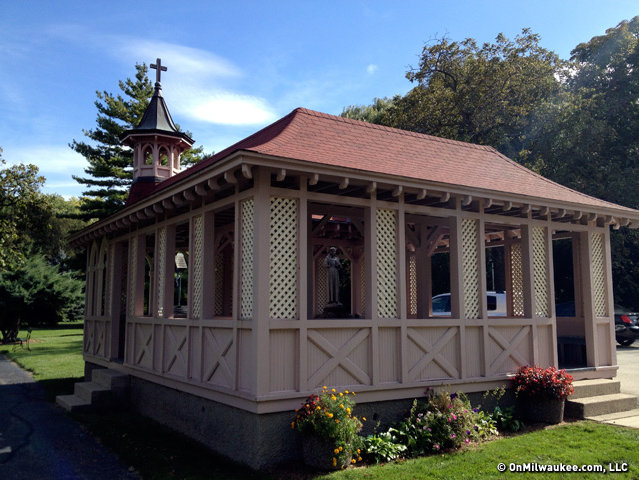 The Assisium (this is a replica) was the first building they erected on the site.

Halfway through the 19th century a small group of Franciscans left Ettenbeuren, a small town in Bavaria, and staked out a community in the current St. Francis, along Lake Drive, at the invitation of Archbishop J. Martin Henni.

Though there have been some splits over the years – one group left for LaCrosse barely a quarter century later and that group also split later on – the community is still active in St. Francis. 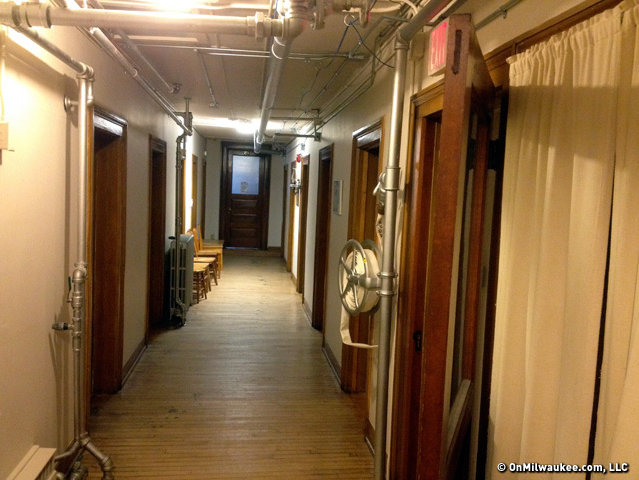 A later building still creaks with age and offers a look at how sisters lived a century ago. 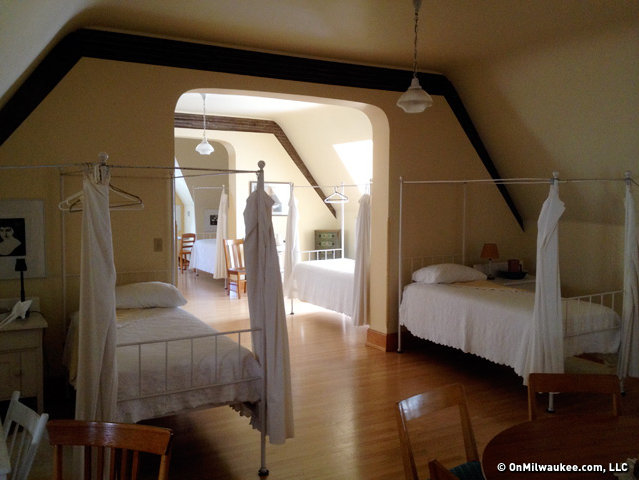 About 30 sisters would have lived in this attic dormitory.

Sister Clare told me that there are roughly 225 currently living in the community and that the median age is likely in the upper 70s or lower 80s. When asked if there were any young women entering it, Sister Clare was able to conjure the name of one in her 40s and a couple more in their 50s.

That explains why the community now has the feel of a retirement village. There is Wii bowling going on in a community room that we pass on the second floor and Sister Clare greets a number of her fellow community members who pass us in the halls in their wheelchairs. 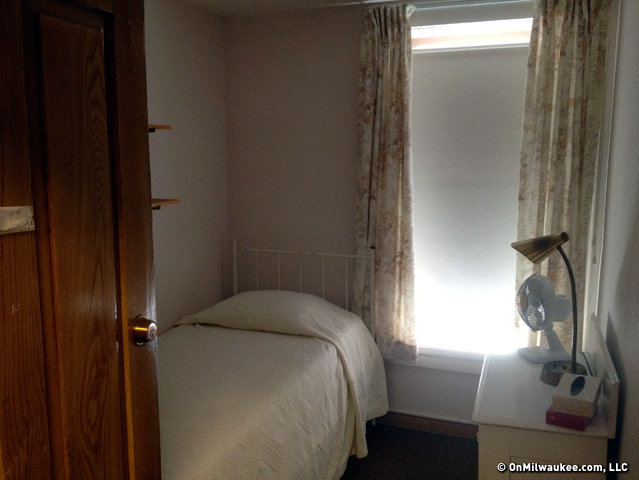 One of the 10x7-foot rooms where sisters would have lived. 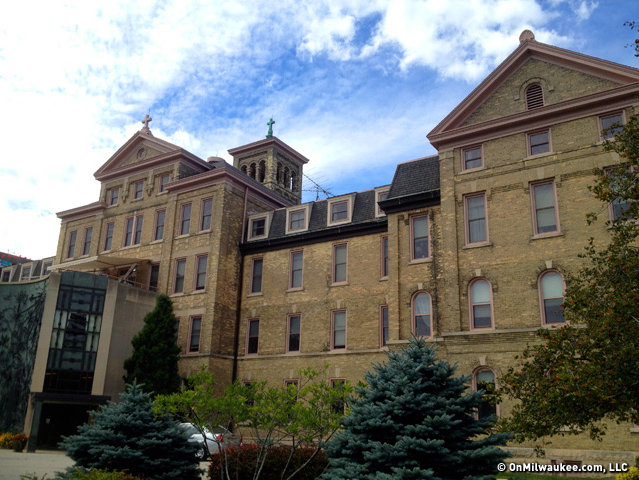 The community, on the border between St. Francis and Bay View, is a sprawling one.

But don't think for a minute that the community is a sad one. There is a lovely mural that tells the story of the community, photographs of the mothers superior along a first-floor corridor and lots of smiling faces. It is a cheery place.

I'm eager to see the community's architecture and so Sister Clare takes me to see the chapel and the oldest extant building in the complex, built in 1861. 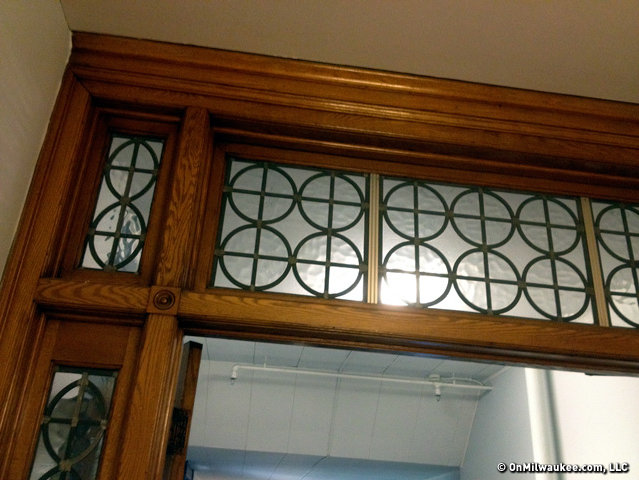 There are nice architectural details inside, including leaded glass ... 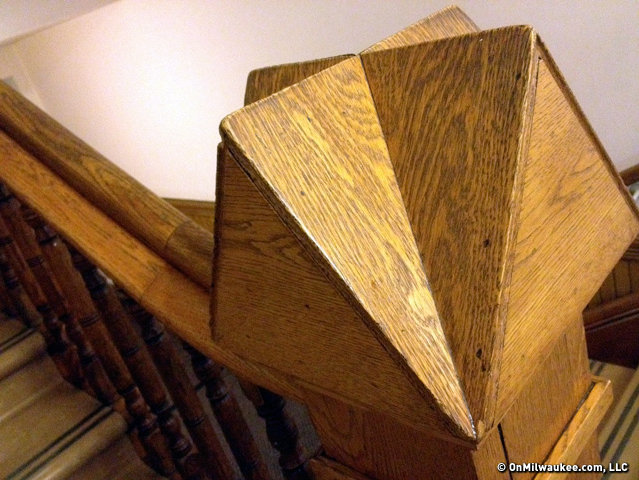 That building is not the Assisium, which can be seen just south of the main complex. The Assisium is an open-windowed wooden structure that recreates the original building erected on the site in 1849.

The 1861 building is fascinating. The hardwood floors creek with age and no one even bothered to try to hide the pipes that hang down from the hallway ceilings. In this building there remain small "cells" that were home to sisters for decades. They're maybe 10 x 7, with a bed, a small table and a window.

On the top floor is a big open room that was a dormitory. Here, the sisters didn't even have the luxury of walls. A bed and a table with a basin were enclosed by curtains, much like an old hospital ward. Though the space seems to lack privacy with the 10 or so beds currently in it, Sister Clare says back in the day there would have been three times as many up there. 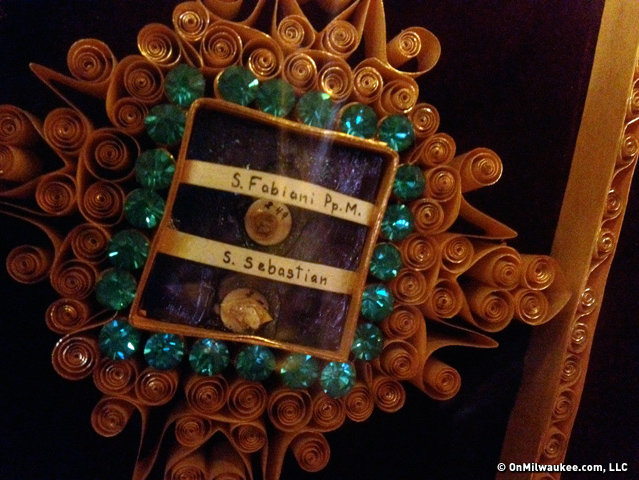 Two reliquaries enshrine dozens of relics, include a fragment of Mary's veil.

She says that some still crave the serenity and simplicity of the second floor "cells" and will occasionally occupy them for brief periods.

At the end of the hall a former sewing room is now home to a small greeting card business run by the Sisters. Adjacent to the dormitory space above, artist Sister Stella Devenuta has her studio and workspace. 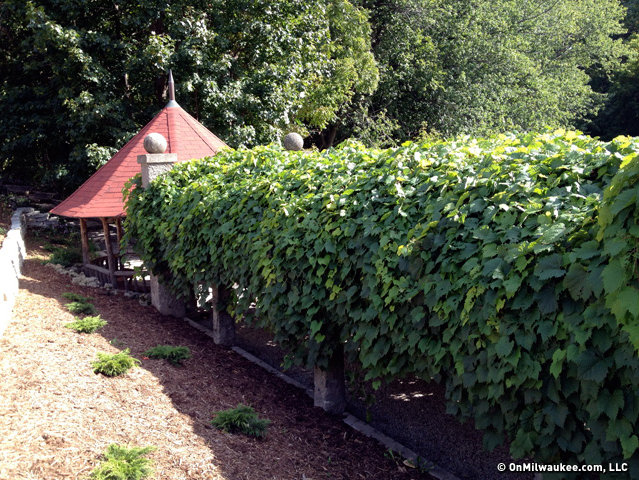 Outside, a long grape arbor offers a quiet respite from daily life.

This building is attached to another built in 1888 and jutting out to the north is the 1894 chapel that seats more than 250. Sister Clare, who has been in the community for well over a half century, remembers a time when Mass meant standing room only. 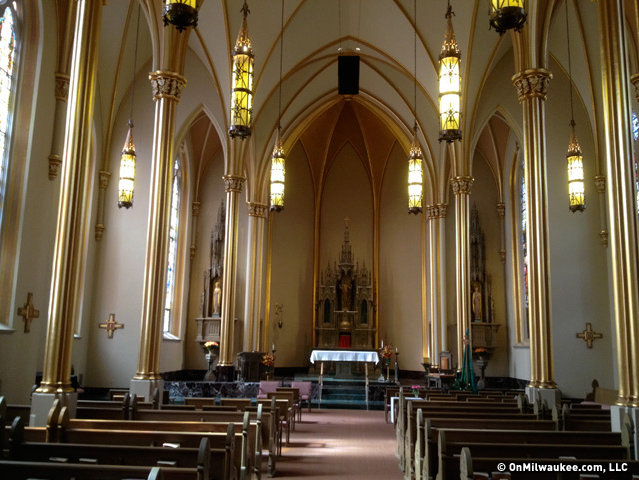 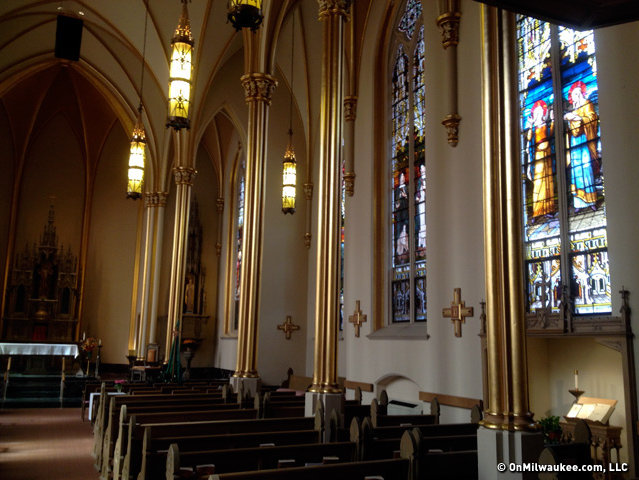 The Gothic chapel – designed by architect Erhard Brielmaier – is 46x112 and has 30-foot pillars running the length of the aisle. The lovely stained glass windows were imported from Innsbruck, Austria.

Brielmaier, who also designed St. Josaphat Basilica, had three granddaughters in the Sisters of St. Francis of Assisi congregation.

Perhaps the most interesting of all is a pair of reliquaries at the back of the chapel. They're not large and they're easily missed. Designed by Brielmaier, these reliquaries hold a couple hundred relics that were collected by Mother Thecla Thren, who was Superior General from 1898 until 1930.

There are relics of San Sebastian, San Fabiani and others, as well as, according to a list on the back of the reliquary door along the east wall, a piece of the veil worn by Mary, the mother of Jesus. I'm momentarily at a loss for words, my skepticism tempered by awe – and vice versa. Then I read the listing to Sister Clare, who seems a little surprised herself.

In all honesty, I wasn't sure what I expected to find when I requested a tour of the grounds, but I was pretty sure a piece of fabric belonging to the Virgin Mary was nowhere on the list. At that moment, I feel like I knew what drew me here. 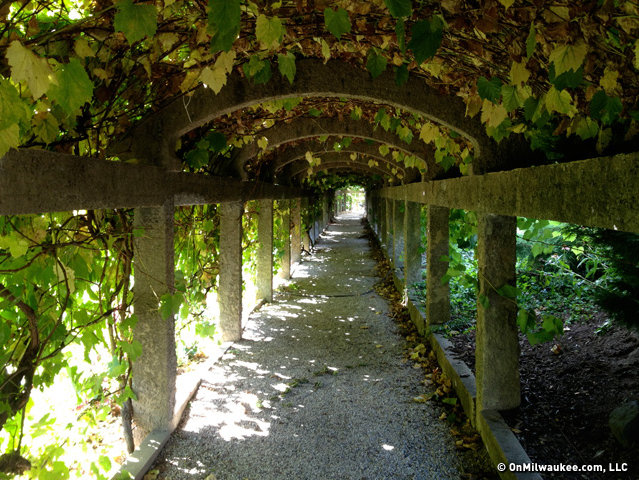 It's always cool beneath the arbor.

Outside, after Sister Clare and I say goodbye, I take a stroll beneath the long path under the grape arbor to the west of the buildings. If the veil is a spiritual and historic touchstone hidden in plain sight in Milwaukee, the grape arbor path is one of the city's "secret" relaxation spots. Out of the sun, it's cool and a little dark and the hustle and bustle of the city feels light years away.

Emerging on the north end of the arbor, I can see the two buildings that are now government subsidized housing for the elderly. Beyond that are some smaller buildings that belong to the community and a big, open green space that Sister Clare said is being planted with native species.

It is work that the Sisters of St. Francis of Assisi feel is their calling; a way to honor their patron saint and his devotion to nature and wildlife.