A sneak peek at the Point Burger Bar opening Wednesday

The project, headed up by local restaurateur Brian Ward, owner of Ward’s House of Prime, was inspired by burger bars in Las Vegas, including Hubert Keller’s Burger Bar and Gordon Ramsay’s Burgr at Planet Hollywood.

"You know fast casual is the trend right now in Vegas," says Ward. "And all these famous chefs are doing burger joints. During our trip, we went to like eight or nine different ones to see what they were doing. And along the way, you saw a lot of options for different buns, different proteins. And people love choices."

A licensing agreement with Stevens Point Brewery, a Wisconsin brewery with a history that dates back to 1857, lends both their name and their beer to the project. The agreement allows them to have a stake in the restaurant without bearing ownership (a proposition currently prohibited by state law). Other breweries, including Sprecher and Ale Asylum have also entered into similar agreements as an effort to spread awareness of their brews in areas outside of the vicinity of their breweries.

The Point partnership is evident in the decor, with blue and white accents (Point Brewery colors) flowing through the space, along with myriad brewery paraphernalia on the walls, which vary from whitewashed wood to brick and metal trim. 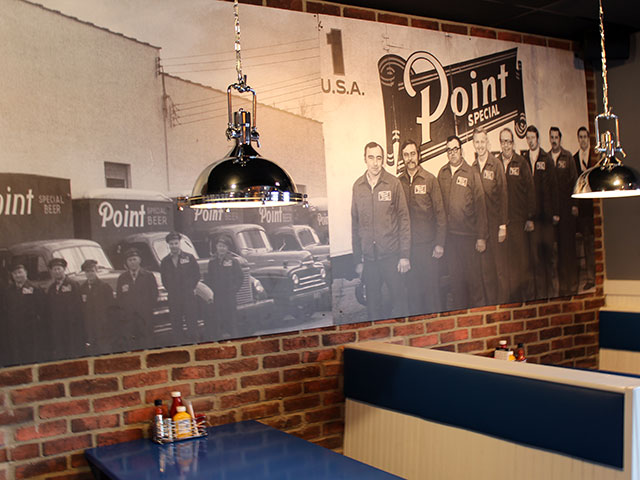 The bar features 30 taps, 25 of which are Point products, along with over 60 bottled brews and a full selection of spirits. 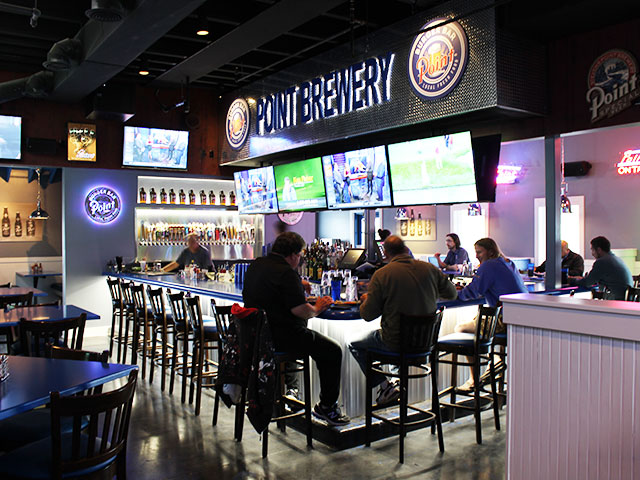 Branded beer kegs form a wall along the west side of the restaurant, showcasing various Point brands and brews. Meanwhile, big screen televisions throughout the restaurant broadcast various sports events. 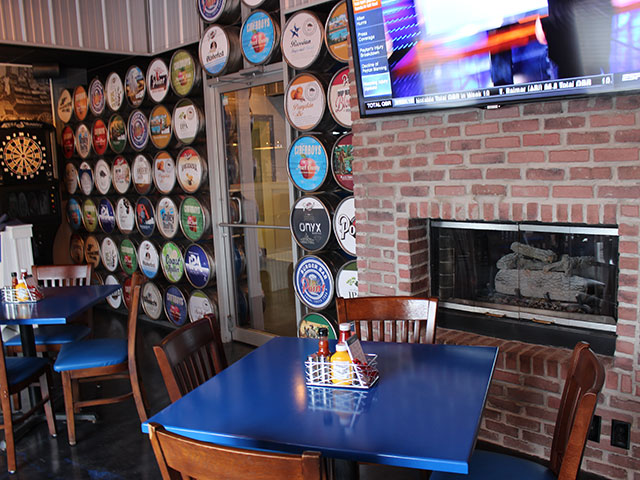 Chef Thomas Peschong, corporate chef for Ward’s and former chef at Turner Hall and the Riversite in Mequon, designed the menu which – not unexpectedly – is filled with mostly burgers, but also numerous other sandwiches, appetizers and a few entrees.

"I was on a bus ride on my way to Green Bay for a Packers game, and that’s when I came up with the idea for making tater tots," says Ward. "And places just don’t do it, because it’s a pain. But, we knew that if we did it, we had to do it well." 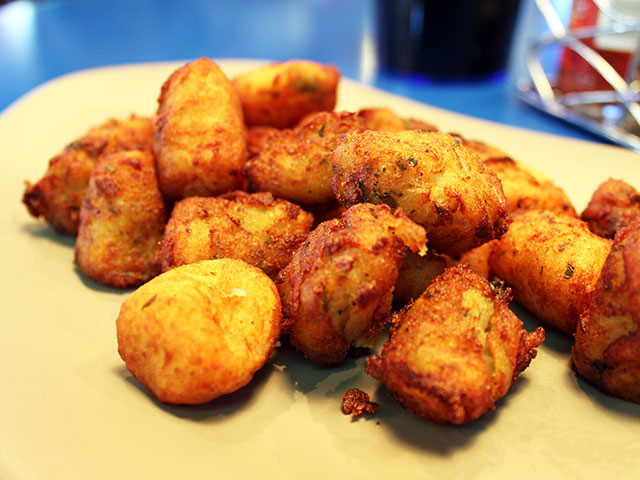 The menu, says Ward, showcases numerous meat choices that you don’t necessarily find at other places, as well as high quality ingredients like Prime Angus beef, locally procured duck and the specialty Boar's Head pastrami (made from beef belly) used as both a burger topping and for stand-alone sandwiches. 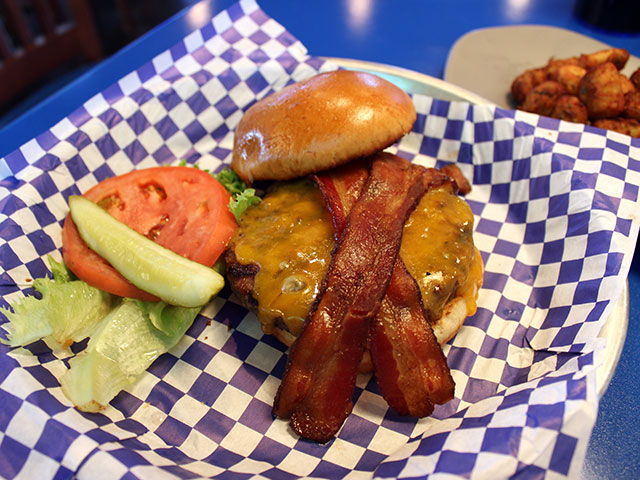 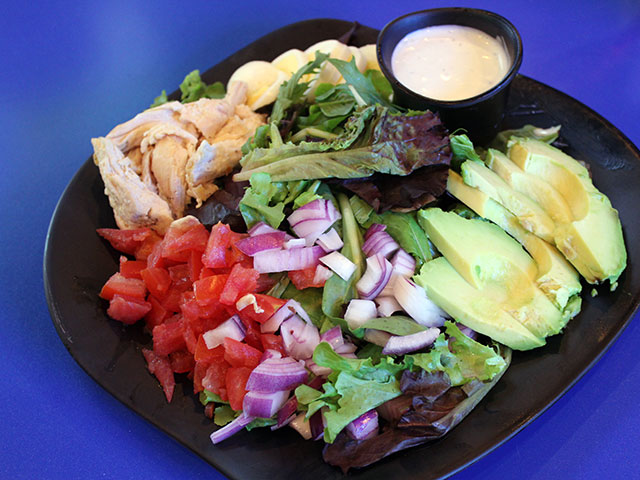 Alternative sandwiches include grilled chicken, a perch po’ boy, pastrami and Reuben ($8.45-10.45), along with "The Nicolas" a sandwich stacked high with one pound of a mix of pastrami and corned beef for $18.95.

Entrees include skirt steak with fries and a vegetable ($17.95), shrimp skewers with lemon garlic butter, rice and vegetables ($14.95) and char-grilled salmon with basil tomato and kalamata relish with rice and vegetables ($15.95). Or you can opt for the chicken pot pie – as big as, or bigger than your head – filled with chicken veloute, carrots, celery, potatoes, peas and onions topped with puff pastry ($13.45). 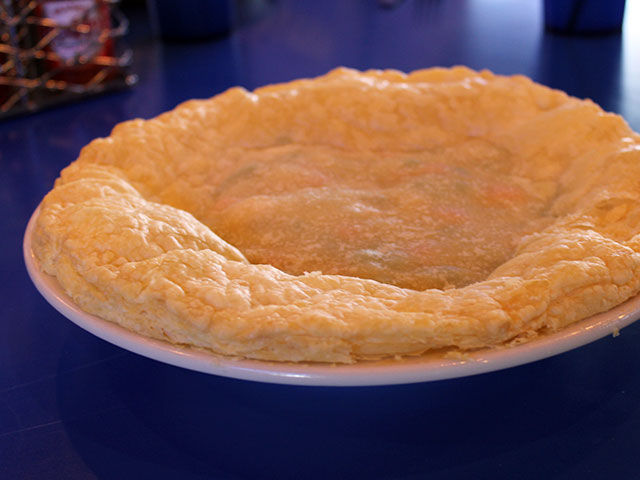 Shakes made with housemade custard are another highlight of the menu, and are available in both classic ($5.95) and alcoholic formats ($10.95). There are fifteen classic flavors and twelve alcoholic varieties including flavors like Dreamsicle, Macadamia Nut Mocha, which is sweet and nutty with a subtle coffee kick from Kahlua and Dark Creme de Cocoa; and Salted Caramel Brittle which includes peanut butter and salted caramel with a hit (two shots) of Jameson and Frangelico. 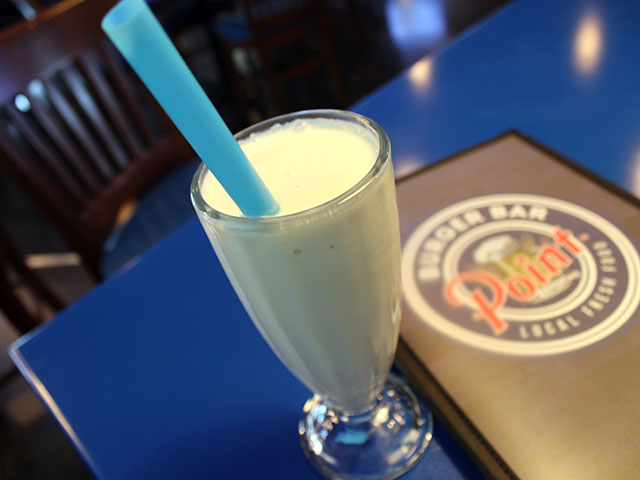 Ward says the restaurant will roll out a Friday fish fry in the coming weeks, as well as brunch service (likely next year).

The Burger Bar will also offer a number of entertainment options, both during the week and on weekends. Happy hour will feature half off taps and rail drinks. Tuesdays will feature trivia; there will be karaoke on Wednesday nights, and the Kris Krowe Band will play on Thursdays (beginning Dec. 7).  Other live music will also roll out on Saturday evenings starting after the first of the year.