More historic buildings at the Old Soldiers Home will be converted

After having kicked off work renovating Old Main into veterans housing at the Milwaukee Soldiers Home, the Madison-based Alexander Company, Housing Authority of the City of Milwaukee and Department of Veterans Affairs kick off the next phase of efforts to transform vacant buildings at the Soldiers Home in service of veterans.

After having kicked off work renovating the Edward Townsend Mix-designed Old Main into veterans housing at the Milwaukee Soldiers Home Historic District, the Madison-based Alexander Company, Housing Authority of the City of Milwaukee and Department of Veterans Affairs launch the next phase of efforts to transform vacant buildings at the Soldiers Home in service of veterans.

Five more buildings will join Old Main – which is getting 72 one-bedroom and eight two-bedroom units, as well as community spaces, a fitness center, resource centers, offices and more – in being rehabbed.

On Friday at 11:30 a.m., Gov. Tony Evers, Sen. Tammy Baldwin, Mayor Tom Barrett, U.S. Army veteran and Medal of Honor recipient Gary Wetzel and others are expected to speak at the event on the grounds of the Clement Zablocki VA Medical Center.

"This project entailed a significant collaborative effort, which speaks volumes to our nation’s commitment to care for our veterans," said The Alexander Company Presiden Joseph Alexander, in a statement.

"Our team is honored to have the opportunity to work with these historic buildings and we’re proud that through our work we’ll be able to return them to the veterans they were built to serve." 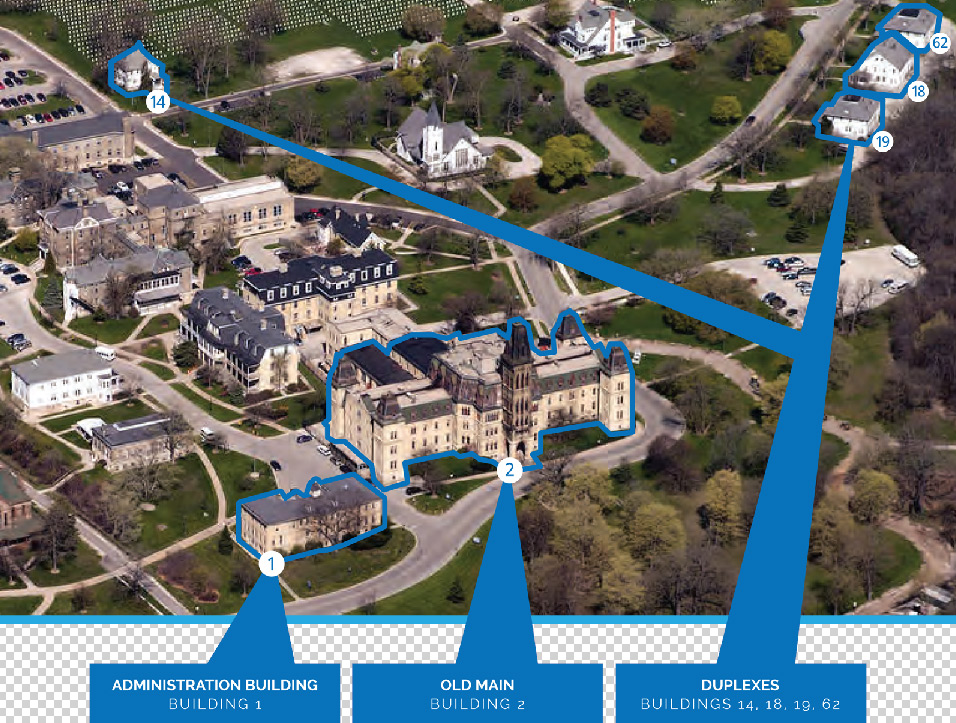 The six buildings (identified on the aerial view above) are expected to create a total of 101 supportive housing units for veterans and their families that are homeless or face homelessness.

The administration building – which you can recognize by the distinctive clock in its facade – which will get single-room occupancy units as well as housing for 14 homeless veterans and their families. There will also be community and activity spaces in the former first-floor post office.

Four houses, including the former Catholic chaplain’s quarters and three that were homes to Soldiers Home staff and their families. The former will remain a single-family residence, while the others will each contain two two-story three-bedroom units on each side.

"I couldn’t be more excited about this project," said Dan Zomchek, director of the Milwaukee VA Medical Center, in the release. "It’s a wonderful partnership between the VA and our community that will enable us to showcase the historical significance of our campus while continuing to advance our mission to care for our nation’s heroes."

The redevelopment is taking place via an Enhanced Use Lease (EUL) agreement with the U.S. Department of Veterans Affairs (VA), The Alexander Company and the Housing Authority of the City of Milwaukee, who will work with a team selected by the Veterans Administration to convert the buildings into 101 supportive housing units for homeless or at-risk veterans and their families.

"We have a shared responsibility to meet the needs of veterans who have served and sacrificed for us," said Sen. Tammy Baldwin, in the statement. "This project tells an important story about our past and will help write a new chapter about serving homeless, at-risk veteran and improving their quality of life."

In December, the VA issued RFPs for three other nearby buildings, including the Henry Koch-designed Ward Theater and shingle-style chapel, and Mix’s 1867-68 Governor’s Mansion. That process is currently on hold.

At Friday’s event contractor JP Cullen will make a $10,000 donation toward the restoration work at the site.

To learn more about the projects or to make a donation, visit SavetheSoldiersHome.com.

First look: The completed veterans housing at the Soldiers Home

Soldiers Home buildings to be converted into apartments