Recently, a number of surplus Milwaukee Public Schools properties were posted for sale for adaptive re-use. We'd already been in three of them, so we popped into another to see what's going on in one more: the former Holton Street State Bank, built in 1927.

Get your Milwaukee history fix this summer with OnMilwaukee's Urban Spelunking, sponsored by DearMKE. Fall in love with Milwaukee and its stories onDearMKE.com, or go on your own urban exploration and share your photos and your stories of Milwaukee with #DearMKE on Instagram, Facebook and Twitter.

Recently, a number of surplus Milwaukee Public Schools properties were posted for sale for adaptive re-use. We’d already been in three of them, so we popped into another to see what’s going on in one more.

The Neoclassical two-story building at 500 E. Center St. was built in 1927 as a home to the Holton Street State Bank and designed by St. Paul, Minnesota-based A. Moorman and Co. architects, which specialized in designing and equipping financial buildings like this. 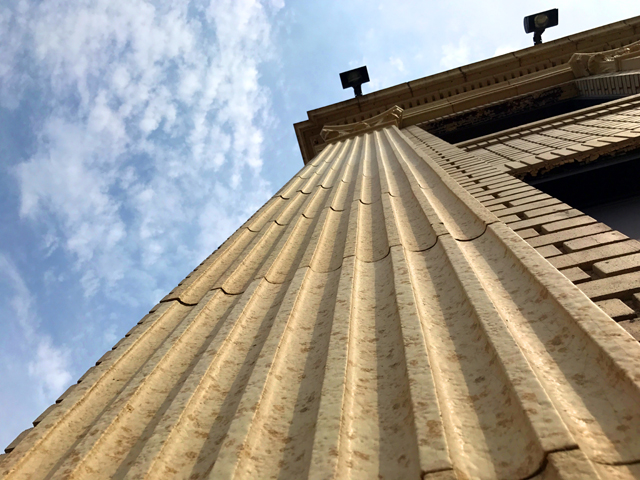 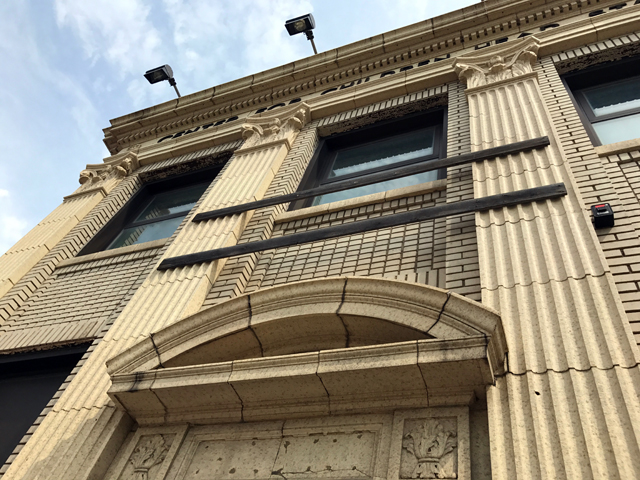 The firm designed numerous other banks in Wisconsin, including the 1915 State Bank in Waupun, the First National Bank in Richland Center (1920) and the Art Deco Thiensville State Bank in 1930, among others.

In 1904, a permit was pulled to move a barn on the site, which tells you a bit about what the neighborhood might've been like at that time.

According to Megan Daniels’ great Razed in Milwaukee blog, the bank was founded up the street in a tavern in 1921.

Daniels says that when the bank almost faltered during the Depression, the neighborhood rallied to keep it open, but in 1960, the end had come and Holton Street State Bank closed. Marine Bank bought it and donated it to the United Way, she notes, and a city report suggests it sat empty until at least 1965.

In 1970, the Boys & Girls Club opened there and an alternative high school – Community Independent Learning Program – was opened upstairs by the UWM School of Education’s Advocate Education Program and lasted into the 1980s.

Most recently, the building served as home to Centro del Nino, a charter school affiliated with MPS’ Head Start program. Centro del Nino began life during in 1975 as a daycare. 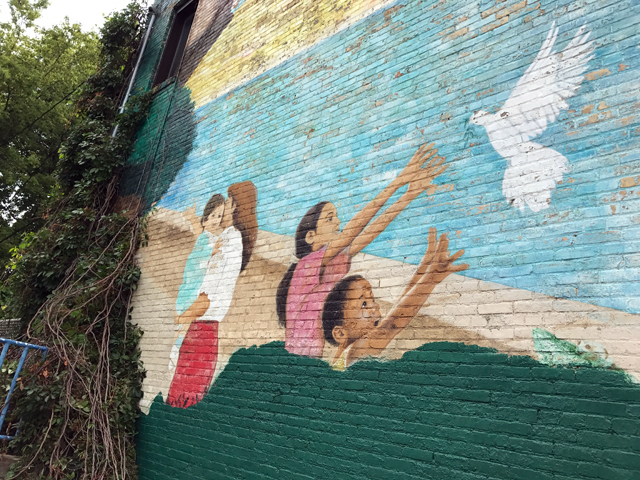 Murals, outside and in. 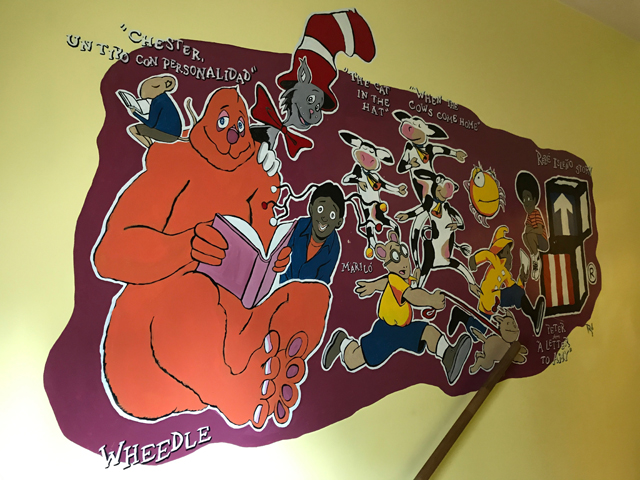 The offices on the second floor, which had their own entrance and address on Holton Street have hosted real estate companies, a dentist and a lawyer, among others.

But the building has been vacant since the program closed in 2006 and was in the news last year when a military-style private school that participates in the city’s voucher program expressed an interest in this building, as well as in some other vacant MPS sites.

That deal was not completed and the building is now being offered for sale, for $223,000, via the City of Milwaukee’s Department of City Development.

You don’t really notice from the outside, but the 7,980-square foot building isn’t large. It’s really only got a couple classroom spaces, along with a few offices, a basement kitchen and play room and some bathroom facilities. 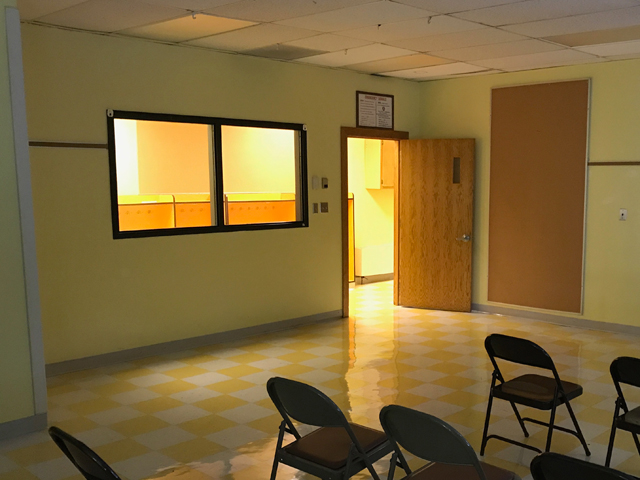 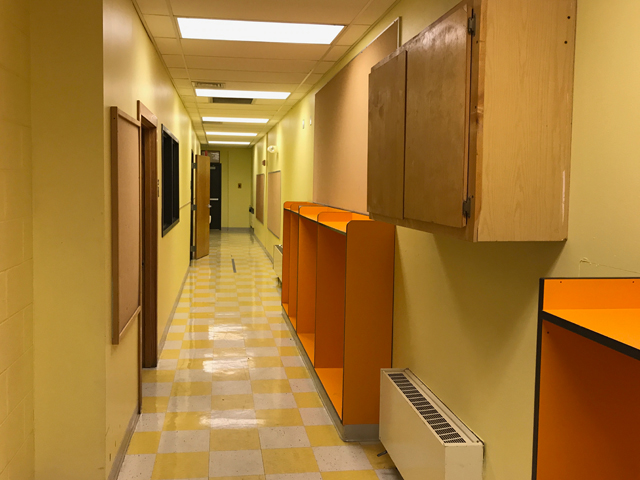 More impressive in terms of size is the nearly 13,000-square foot fenced-in yard out back, at least part of which was originally parking for the bank. The city also owns an adjacent vacant lot to the north, which could be added to this site if a purchaser wanted it. 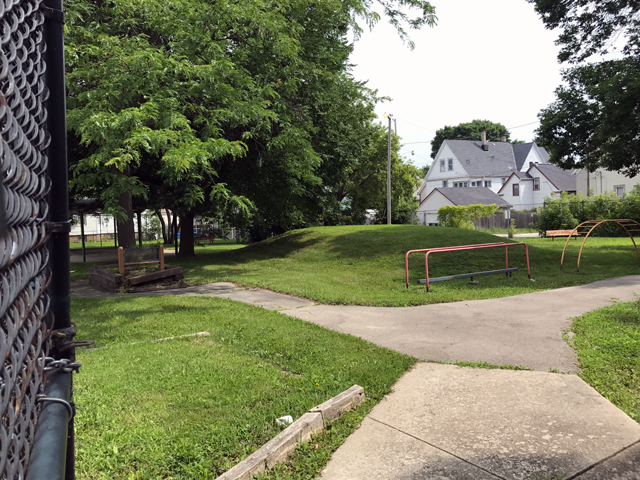 These now-open spaces were once the site of homes, garages and stores, all of which appear to have been demolished by the end of the 1960s.

Outside, the building is quite beautiful, with fluted mottled terra cotta pilasters topped with capitals punctuating the symmetrical pressed buff brick facade. In the center bay is the entry, capped with an entablature and terra cotta circular pediment.

The theme continues around the Holton Street facade, where an old brass night deposit drop survives, etched with graffiti from across the decades. 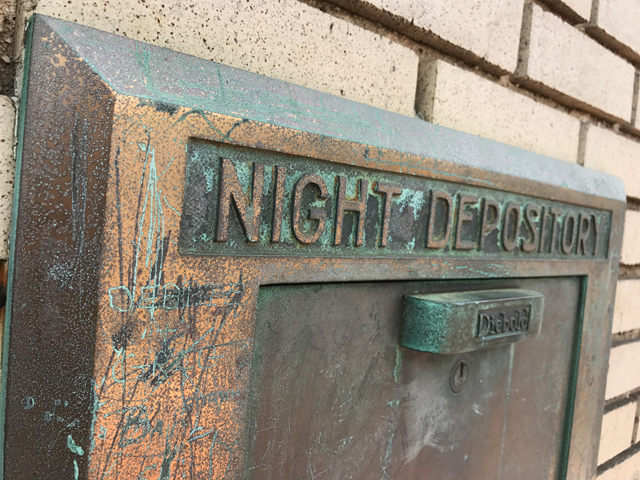 The east facade of the building is obscured by an earlier neighboring retail building with an apartment above. A window bay in that apartment now abuts the former bank.

Above the cornice on the front of the bank there’s a faux balustrade.

A stone course runs along the base of the building. In one corner the stone is broken, revealing a substructure of cream city brick and concrete. 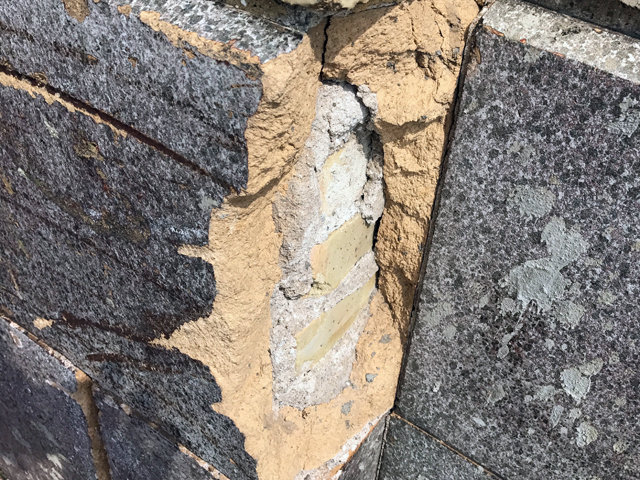 There’s a wheelchair ramp at the back door and a wheelchair lift up front. What there really isn’t are historical details from the bank era. The marble that lined the lobby is either long gone or covered up (let’s hope the latter!).

The basement vaults and safe deposit boxes are no longer there.

The whole place has been divided up, dry-walled, drop-ceilinged. If you want to see what little remains from the early days of the bank, you have to pop your head up through the dropped ceiling. There you can see the remnants of the ornately decorated ceiling. 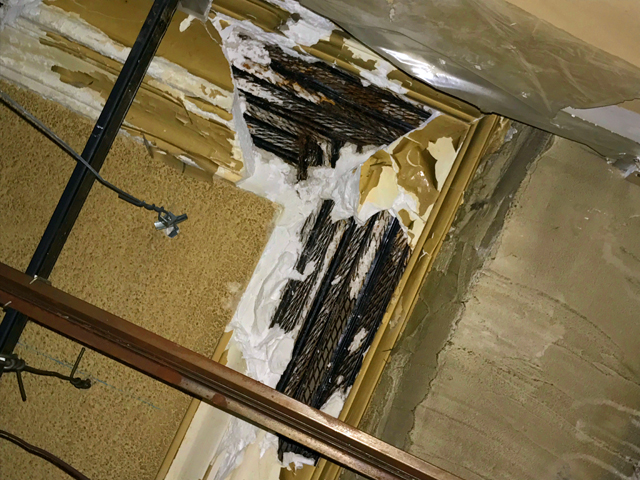 The railings and newel posts on the staircases at the front and back of the building also look like they could be original. They’re heavy duty workhorses, with just a hint of style, surely meant to convey a spartan reliability to customers.

The day I visited, two groups were touring the building. One is considering a senior day care here or at another vacant site. The other is looking to open a doggy day care aimed at Riverwest residents. 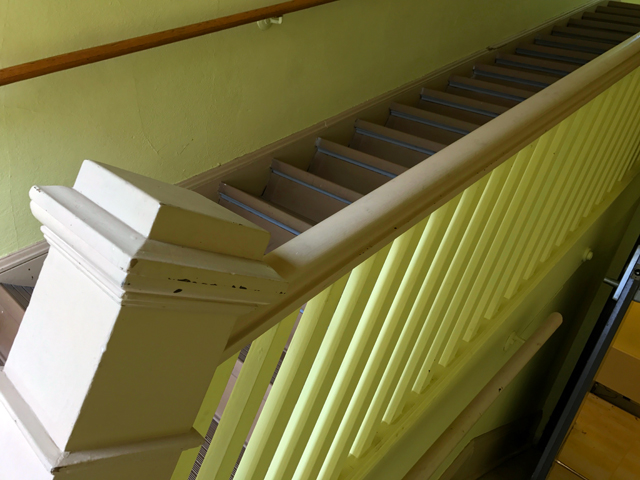 The building seems suited to either enterprise. There are plenty of spaces in a few sizes, allowing for a mix of common areas and smaller private offices or meeting rooms.

It’s disappointing that the interior has lost its original grandeur, but it’s got good bones and regardless of how a buyer alters the interior, the building’s stately face will continue to be a neighborhood asset.