Urban Spelunking: The "other" Grand Theater

For many Milwaukeeans, mention of The Grand Theater conjures images of 1980s Wisconsin Avenue. But long before the palatial Warner Theater was recast as The Grand to complement the opening of The Grand Avenue Mall, there was the neighborhood Grand Theater on Holton Street.

For folks of a certain age – by which I mean about my age – mention of The Grand Theater conjures images of 1980s Wisconsin Avenue.

But long before the palatial Warner Theater was recast as The Grand to complement the opening of The Grand Avenue Mall in 1982, there was the considerably less opulent and spacious Grand cinema at 2917-23 N. Holton St., where the Harambee/Riverwest neighborhoods meet. This one was built in 1911.

(Trainspotters will also note there was yet another Grand Theater that operated briefly, only from 1904 to 1909, at 738 N. 3rd St. Still another was in South Milwaukee.) 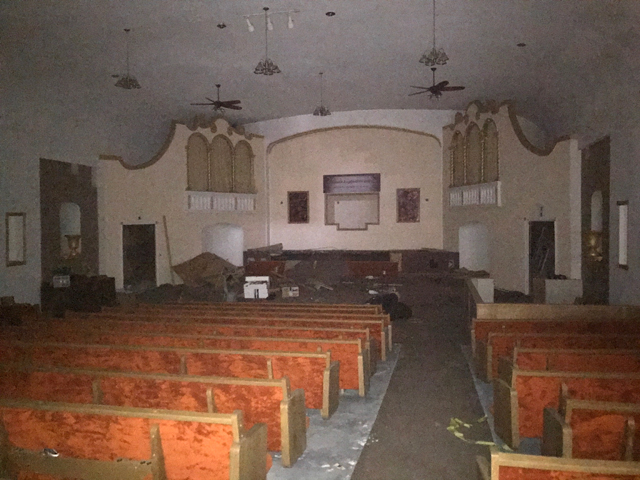 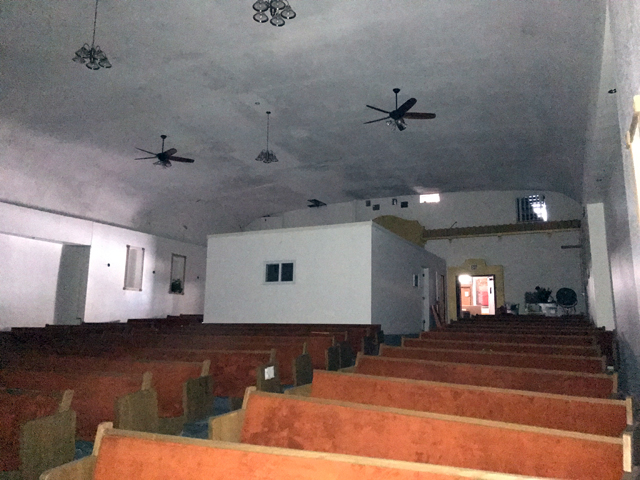 Thanks to a foreclosure, the 6,846-square foot Spanish Colonial-style building, which long housed a church, is now in the City of Milwaukee’s commercial real estate portfolio and could be yours for a cool $20,000.

Designed by architect John Roth Jr. – who also designed the smaller, 600-seat Aurora at the same time – construction on the 760-seat theater began in December 1911 and it had a long run, showing films until it closed in 1975.

City permits suggest it was enlarged in 1922 to accommodate 850 movie-goers.

In 1928, architect A. L. Seidenschwartz – who did work at this theater, too, the building of which survives today – remodeled the theater in the atmospheric style, meaning he made the theater space itself appear to be outside, with the addition of clouds and stars and a bit of Mediterranean-style tile roof hints. Permits show that the ceiling was raised, roof trusses added and the exterior altered. 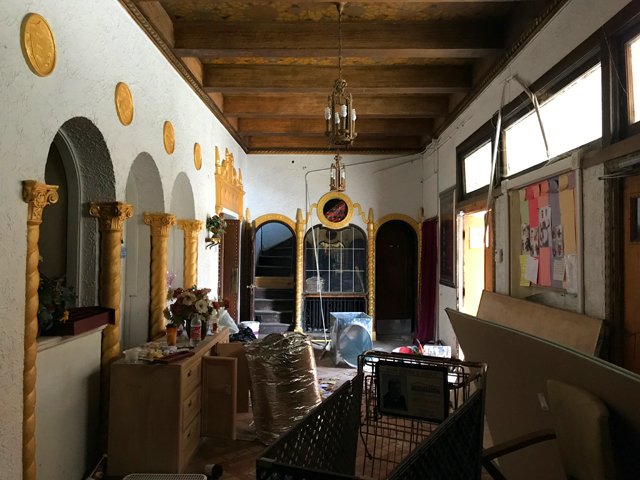 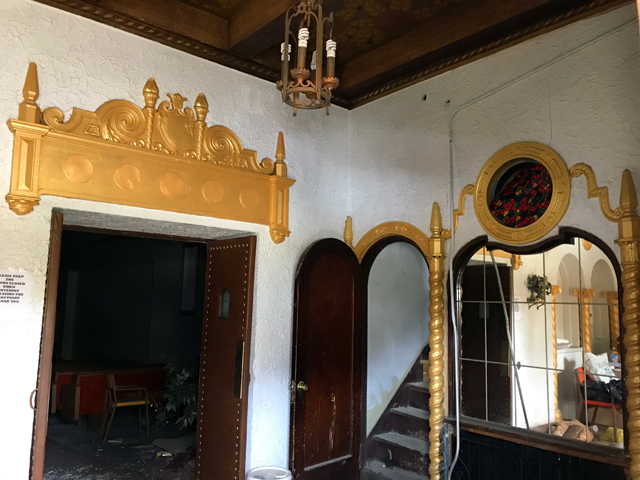 In 1946, some seats were removed to make room for the construction of a candy stand.

According to Larry Widen, co-author of the fine book, "Silver Screens: A Pictorial History of Milwaukee’s Movie Theaters," "They tried some adult films and some art films but both ventures were short lived."

Some have suggested it may have operated for a time, later in its life, as Puerto (or Porto) Rico (and, briefly, at the very end as the Magik Grand Cine). Local history buff Carl Swanson wrote a good history of the theater here; I will merely summarize that here and encourage you to visit Carl’s site.

Built just a few years after the dawn of dedicated movie houses in Milwaukee, the Grand really is, as the DCD sell sheet notes, one of the oldest cinemas in the city. 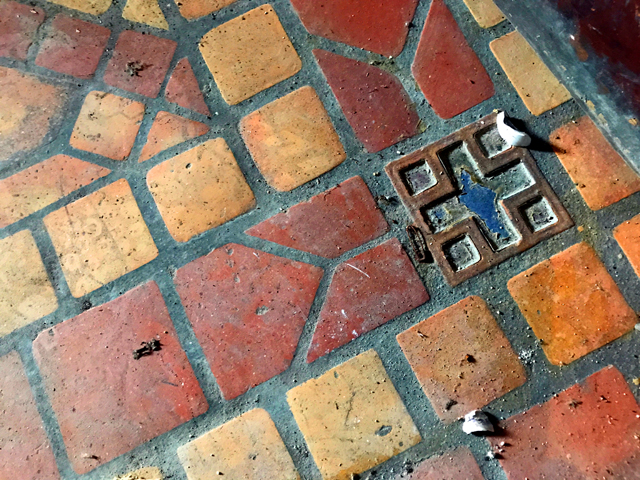 And, as a smaller neighborhood theater, it hearkens back to a time when Milwaukeeans could walk around the corner to see the latest films, seated among their neighbors, rather than driving to a movie mall somewhere in the suburbs and watching anonymously.

It’s unclear which of the two churches built the block of rooms that now occupy the back-center portion of the auditorium, but Haven of Hope must have expected to stay longer than it did. Architectural plans hanging inside show an expansion plan onto the vacant lot to the north.

Heading inside, I was unprepared for just how intact the former Grand is as a theater. 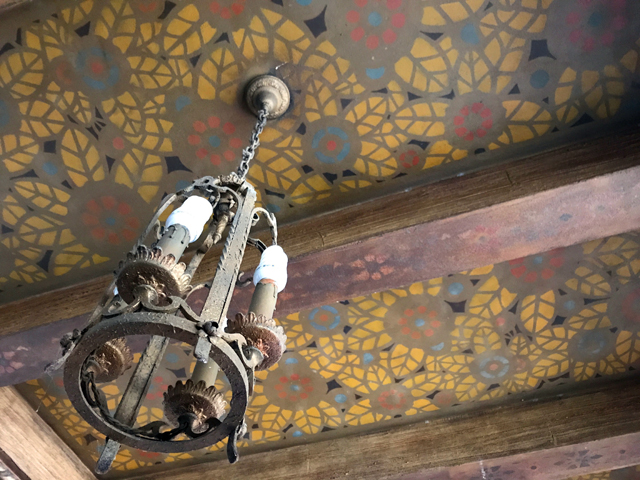 Step inside the lobby and there is earth-toned floor tile, exposed beam ceilings with elaborate painted detail that is almost entirely intact.

A series of decorative hanging light fixtures remains, too. Solomonic columns and a quartet of medallions are painted gold and there’s still more decoration here above the doors, above the mirrors on either side of the lobby. There’s also wrought iron radiator grates. 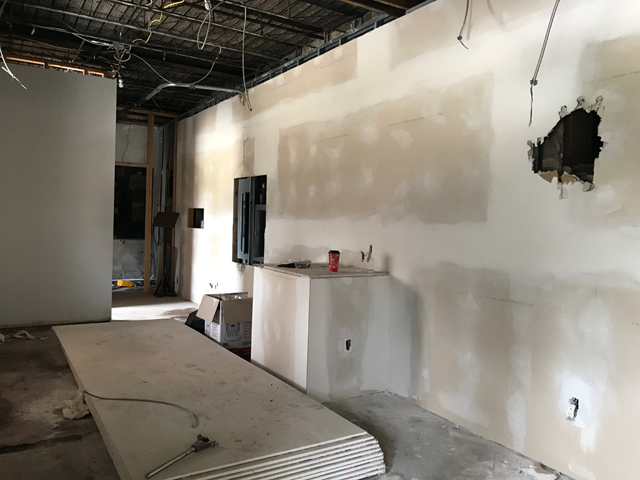 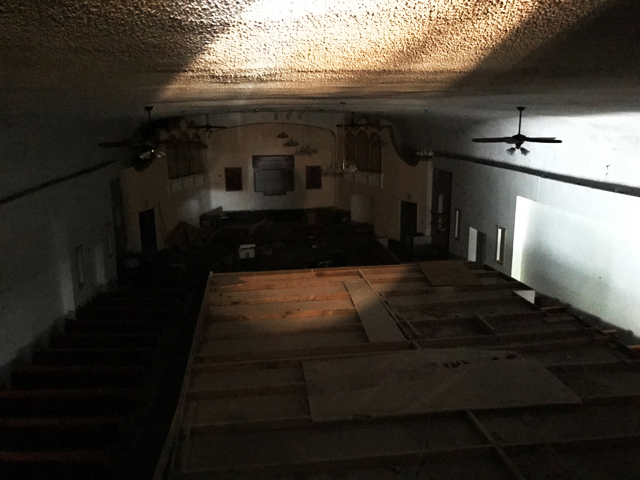 Though the movie poster cases are bricked up on the exterior, their access doors remain in the lobby, which is flanked by men’s and women’s rooms that, in large part, maintain their vintage floor and wall tile. A door in the women's room has a lot of graffiti etched into it. 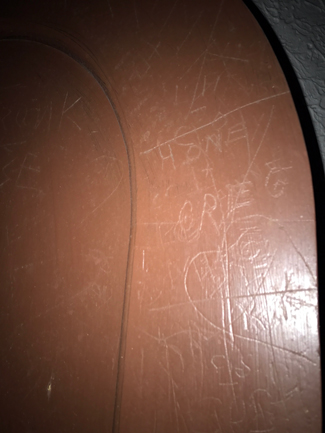 A narrow bent staircase leads up to the projection room (pictured above), which appears to have the original footprint, though all but one of the openings out into the theater have been dry-walled over.

Step through the padded, studded doors into the auditorium and you’re transported back in time (if you ignore that block of rooms that surely could easily be removed ... hand me a sledgehammer and I’ll start).

Rows of theater seats have been replaced with wooden pews, but the proscenium that conjures a Spanish plaza still stands.

A series of niches can be found on each side wall. At the back is a strip of Mediterranean roof tile, again suggesting we’re outside. 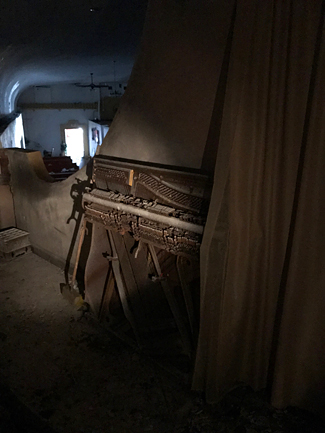 Follow the north gangway and you’ll find a tight, steep metal staircase up to a space behind the three arched openings in the proscenium. Up here is the remnant of a piano. If The Grand had an organ, the pipes were likely up here.

I couldn’t find a staircase off the south gangway up to a space on the opposite side of the proscenium, but window openings facing the alley out back suggest there is a similar space up there, though the access may have been closed off.

Beneath the stage and running along the back was a narrow space with stairs up to the stage itself (pictured below). It's too tight to have been a useful dressing room or orchestra pit, I'd think, so perhaps it was simply a means of access from behind, or it led to the basement.

I can't be sure because we didn’t get to see the basement, which is apparently not a full cellar. 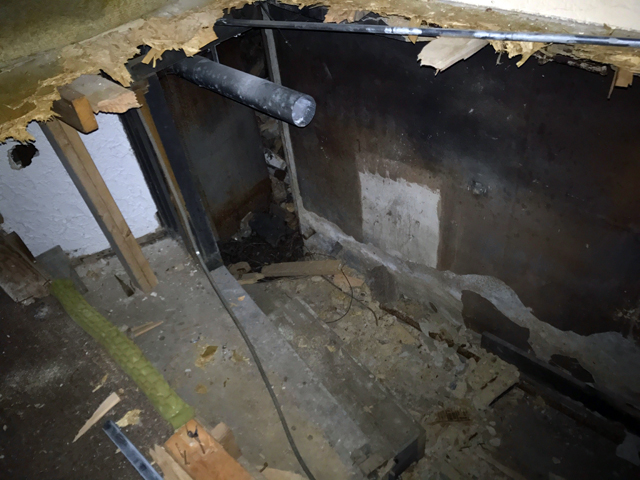 For someone with the means – or handyman skills – the idea of returning The Grand to use as a theater – be it films, be it live theater, be it concerts – doesn’t seem at all far-fetched. 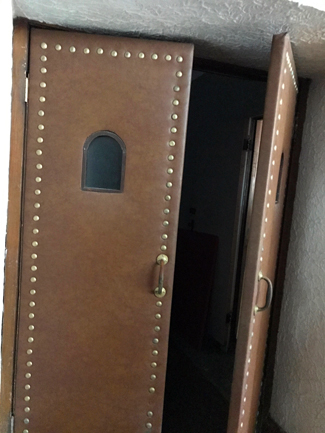 The Department of City Development is accepting proposals (and offers) for the building until 3 p.m. on June 30.

Restoration of the building and façade are required in all proposals, but note that grants for the facade and renovation are potentially available and the DCD has access to other financial resources, too.

The building does include the vacant lot to the north, bringing the square footage of the land to 8,314.