Rarely have I felt the pressure to write one of these spelunking stories so quickly. But, in this case, time might be of the essence. That's because last week I got a tour of the trio of buildings that were home to Laacke and Joys before it vacated a couple years ago and demolition was expected to start if not quite any minute, then certainly any day.

Rarely have I felt the pressure to write one of these spelunking stories so quickly. But, in this case, time might be of the essence. That’s because last week I got a tour of the trio of buildings that were home to Laacke and Joys before it vacated a couple years ago and demolition was expected to start if not quite any minute, then certainly any day. 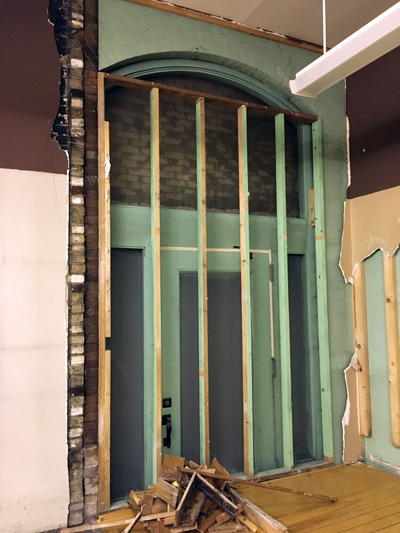 It’s entirely possible that as you read this, some or all of the buildings at 1433 N. Water St. planned for demolition will have been felled.

There are three buildings in the complex. The largest was erected in 1895 by the Northwestern Furniture Co. – which had outgrown its previous home nearby on Water Street – to plans drawn by architect Charles Kirchhoff.

The four-story structure has been whitewashed, but if you get up close you can see some nice corbelling and attractive florals on the lintels above the windows.

This building is slated for demolition to make way for a new five-story office building designed by Plunkett Raysich Architects. The new building, like its predecessor, will be wedded to the smaller four-story building that was added by Northwestern in 1926, creating a complex of nearly 114,000 square feet. 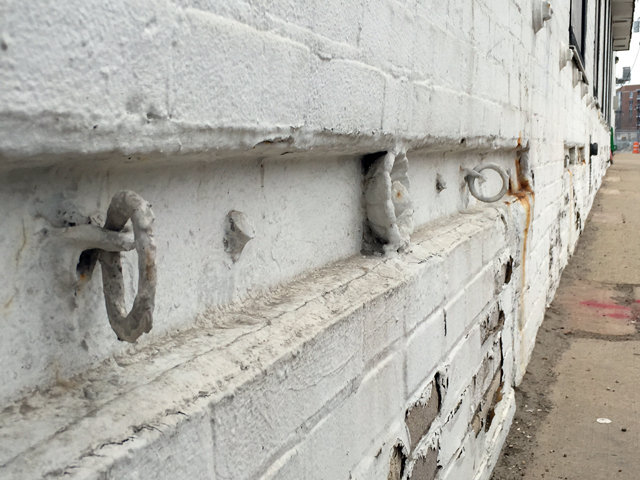 Ad agency Bader Rutter will be the site's major tenant, occupying at least two and a half floors. BR President Jeff Young told me he expects to be sitting in his new office within a year.

"What to do here went through multiple iterations," said Young. "The first iteration was they were going to keep everything. But then what the developer learned was that (older) part of the building didn't have the footings that can support the office structure that they wanted to put on. Then the decision was made that they would keep part of the old and then build new.

"There was also a point where they were going to tear everything down. They decided to keep part of the old because we like that idea, but then that turned out to be better probably economically, as well." 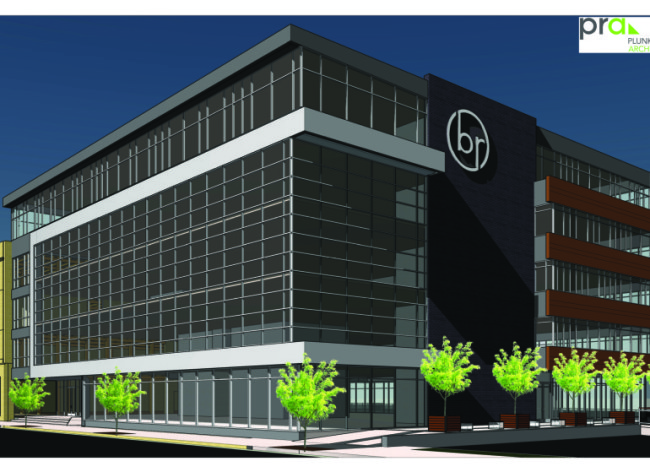 A rendering of the new construction planned for the site. (PHOTO: Courtesy BizTimes.com)

Though the facades don’t match, the newer structure, which has broader window openings, also has some nice brick detailing and a nice arched entryway that’s still bricked up outside but was recently uncovered from the inside and which, it appears, will be reopened. 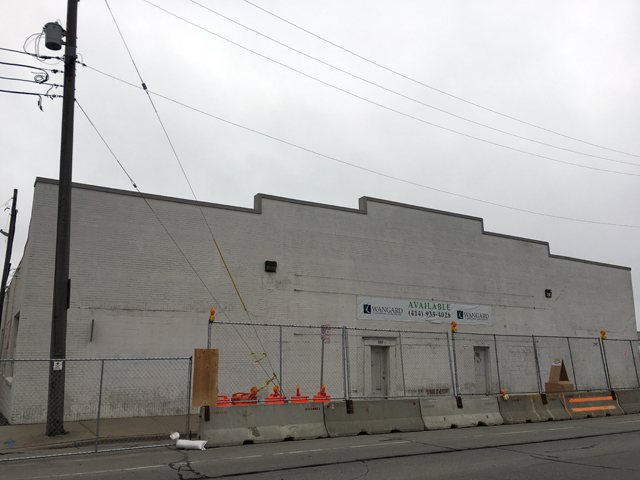 Less is known about the former garage/storage building, to the northeast, which is not connected to the other buildings. That one, also executed in brick, has an eye-catching terra cotta roof supported by a web of steel beams. 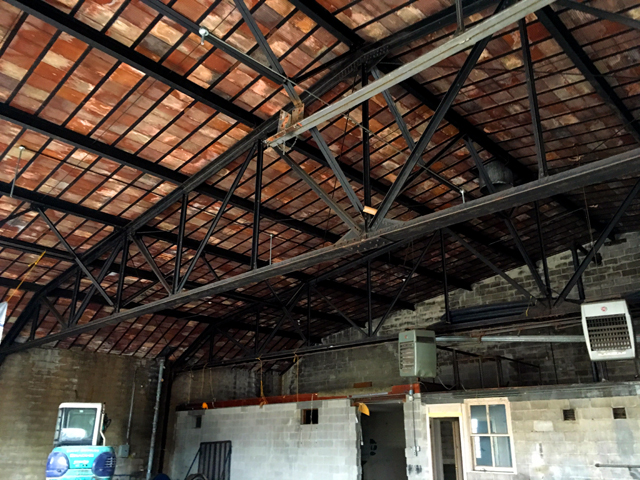 It is the first one slated for demolition, to make way for parking, though there is talk of developing a hotel on the site – which was purchased by Wangard Partners in April for $3.7 million – in the future.

As part of the project, the Riverwalk will be expanded along the riverfront edge of the property to connect with the path at The North End complex.

During my visit, the place was already empty and salvage teams had already begun work reclaiming hardwood floors and other materials. Some of the impressive, old-growth timbers used to erect the building will be salvaged as the building is dismantled. Alas, the brick, because it was covered in lead-based paint, won’t likely be saved. 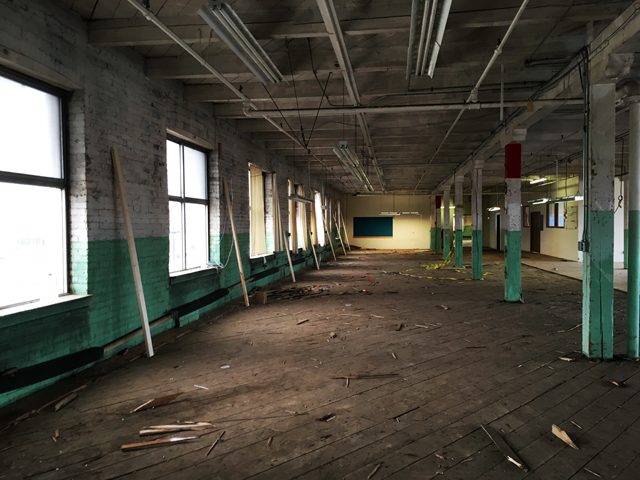 Seeing it so wide open conjures images of what it must’ve been like when Northwestern was moving in to manufacture office desks and fixtures for taverns and retail shops. The upper floors are flooded with light thanks to copious windows. 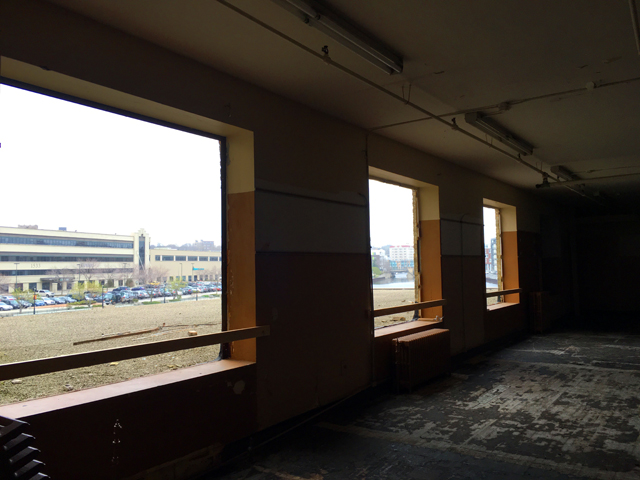 This is a revelation for those of us who remember it as home to Laacke and Joys, which opened in these buildings in 1961 (though it had already been in business in one form or another since 1844) and remember the space packed with tents and camping supplies, outdoor wear and other items. The first floor windows remain infilled from that era and will be reopened in the building that will survive. 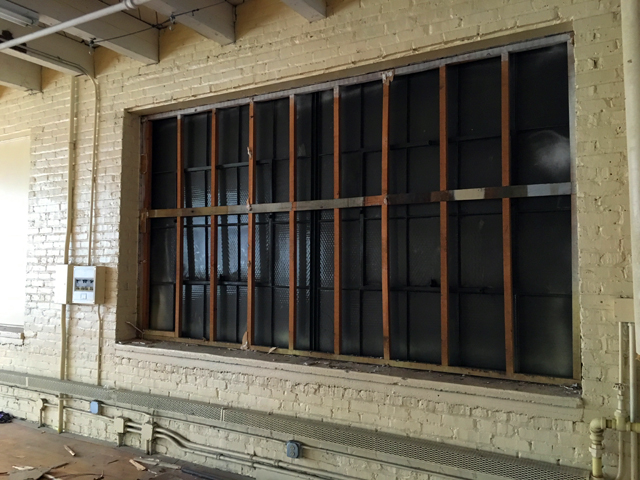 Walking through, it was plain to see that Young and his Bader Rutter colleagues Larry Engel and Audra Jacobs appreciate the history of the building and its sturdy construction and interesting details.

Those are but part of why Bader Rutter is moving its 220 employees Downtown from its current home in Bishop’s Woods office park in Brookfield (completing a trade of sorts, since Laacke and Joys consolidated its operations in Brookfield upon closing its Downtown site in 2013). 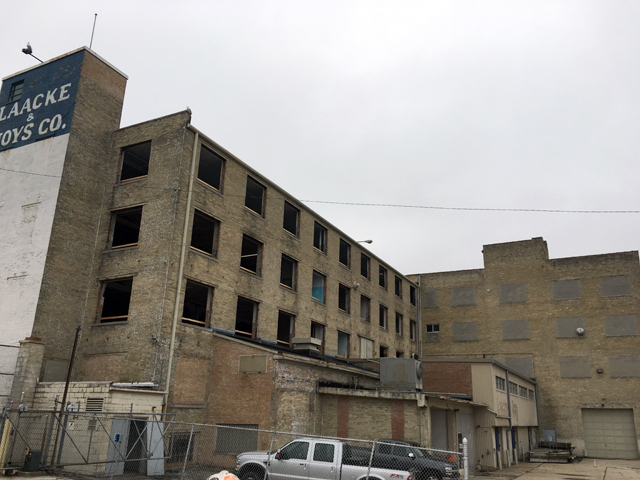 "In terms of us deciding we were going to stay out where we were when our lease was up or move Downtown, it was really kind of a no-brainer for us because we're in the creative industry," said Young. "We're in a high energy kind of industry and just being Downtown obviously adds that, and what's going ... The transformation that's occurring here.


"We think two things will happen. One is we can feed off the energy, especially of this particular area and all the building that's going on here right now, but also add to it. We've got over half of our employees are under 35 years old. They don't want to be in Brookfield. They want to be here, right on the river." 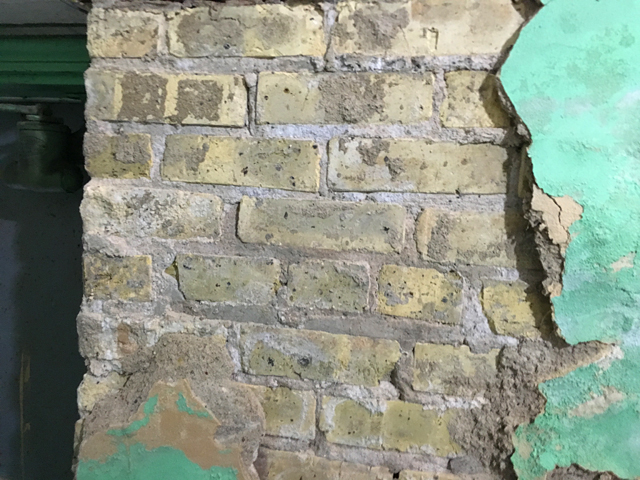