House Capt. Russ Rivard invited me and Doors Open MKE’s Amy Grau for lunch and a tour of firehouse, which is surely Milwaukee’s oldest, though you can’t tell that by looking at it. That’s because in 1935, the front of the 1872 building was torn off and replaced with the station’s current orange brick moderne aspect.

These days there are just four firefighters per shift stationed there – on three shifts – to work a single engine truck. Basically, the minimum that can work such equipment. Though some other vehicles are parked there, they’re inactive; in storage.

At our lunch there were four first shift firefighters, plus two visitors – 1st Battalion Chief DeWayne Smoots and Aaron Lipski, deputy chief in the firefighting division. Lipski is a fourth-generation Milwaukee firefighter and his brother, Dan, is assistant chief. 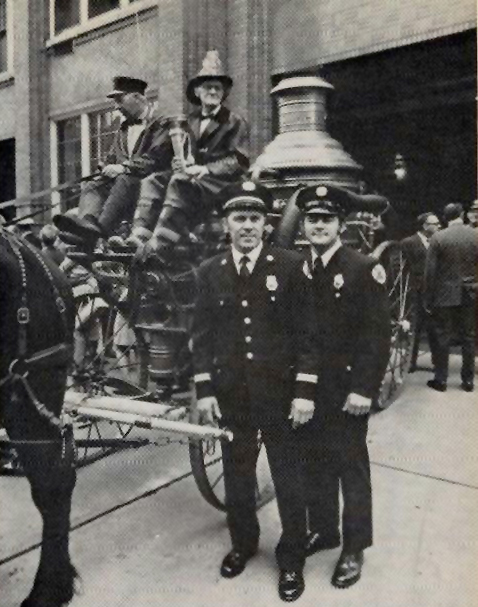 Aaron Lipski, deputy chief in the firefighting division, is a fourth-generation Milwaukee firefighter. His great-grandfather
Henry Lipski is seen here seated at right on the rig, and his grandfather Daniel Lipski stands in the foreground center.

Of course, just as soon as we sat down to eat, a call came in and the four firefighters had to answer a call on 7th and Wisconsin. I imagine the microwave gets a lot of use here. 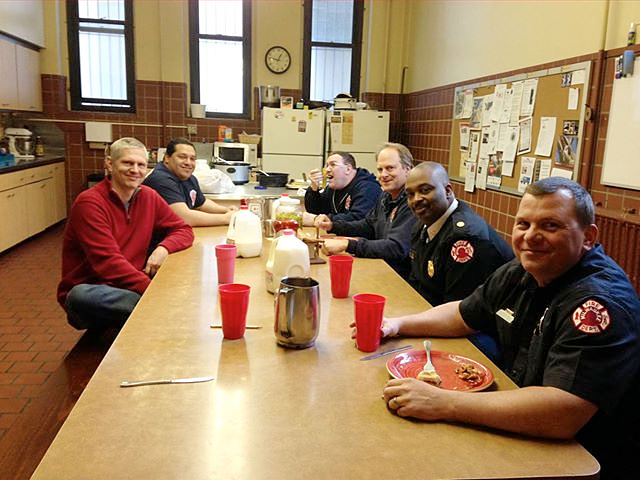 While they were out, we noticed a photo on the wall taken in the same kitchen in 1956 shows at least 15 firefighters at table. 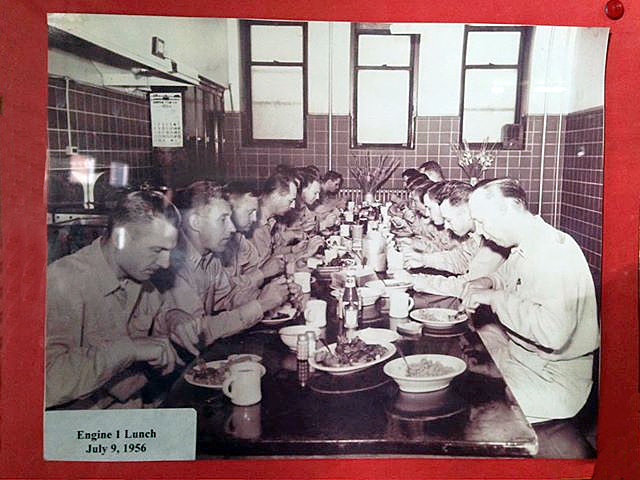 Back then, the house was also home to a ladder company, but, still, look at a map of Engine 1’s coverage area Downtown and up toward the lower East Side and it’s easy to see that staff is stretched thin here.

But while firefighters won’t hesitate to tell you about the effects of budget cuts and station brownouts across the city, the stress of the job doesn’t appear to have made them any less welcoming or quick to dish up a cutting one-liner. The result is that one feels immediately at home.

Firefighters have been making their (second) home on this spot since 1858, but Engine 1 and Ladder 1 – now housed on 7th and Wells – have a much longer history in East Town.

Hook and Ladder 1 was established in 1837 and the following year was based out of a new firehouse on the northwest corner of Milwaukee and Wisconsin. Engine 1 was formed in 1839 and based in a warehouse owned by George Dousman on the south end of Water Street, near where the old fireboat house still stands.

The engine company moved in with the hook and ladder team in 1840 and were together from that time until recent years. When the Milwaukee and Wisconsin station was demolished, the companies were moved to a hose company house next to the old court house on the northern side of Cathedral Square.

But this turned out to be a problematic arrangement and in 1858, MFD bought a 60x120-foot lot on the east side of Broadway, between Mason and Wells, in the Seventh Ward, from the Milwaukee University – which had occupied an old church on the site – for $10,000 and built a new station.

For a while, the fire company occupied the first floor of the new building and the seventh ward school – which drew some of its students from the now-defunct university – met upstairs.

According to a 1933 Milwaukee Journal article, "in one room on the main floor the engine, two hose carts and the ladder wagon were kept. In an adjoining room the firemen soled shoes for Bradley & Metcalf when no official duty was required. Old timers say it was interesting to note the alacrity with which these men pulled off their aprons, left their lasts and took their places on the apparatus when there was an alarm."

It wasn’t long, however, before this new place also proved inadequate. In 1867 (the same year the volunteer firemen became paid employees), Chief Engineer Patrick McLaughlin – hailed after his death in 1871 as "a zealous, vigilant and fearless officer" – stood before the Common Council and reported that the station house was, "sadly out of repair, the sleeping apartments are filled with the odor of the stables and the bedsteads are old-fashioned, corded, rickety, buggy and unfit for use."

Though McLaughlin didn’t live to see it, the current two-story brick house was built at a cost of $13,000 and opened in 1872. It also included the chief engineer’s office and the city’s fire alarm system. Another $3,000 was spent to add stables to the back the next year.

Randy Garber's "Built In Milwaukee" notes that, "The very early stations (prior to 1885), were designed by various local architects in the grand styles of the day – Italianate, High Victorian Italianate and Gothic."

While the "Chief Lippert" firehouse on 7th and North, erected in 1876, is thought to be the work of either Thomas Philpot or Sebastian Brand, who went on to design many Milwaukee firehouses, the Seventh Ward firehouse was the work of Henry Koch, who designed many Milwaukee schoolhouses, as well as our towering City Hall.

"In 1872," writes Dennis Pajot in "Building Milwaukee City Hall," "the firm (Koch & Hess) became heavily interested in what would eventually become Henry Koch's bread and butter, government buildings. Finished in November, the new hook and ladder company ... was said to be 'a really handsome structure.'"

The original Victorian Italianate firehouse was indeed a stunner with three bays – each with a wide wooden door to allow equipment access and sleeping quarters above. The central bay was capped with an ornate four-story bell tower, with a louvered belfry and topped with a flag pole. 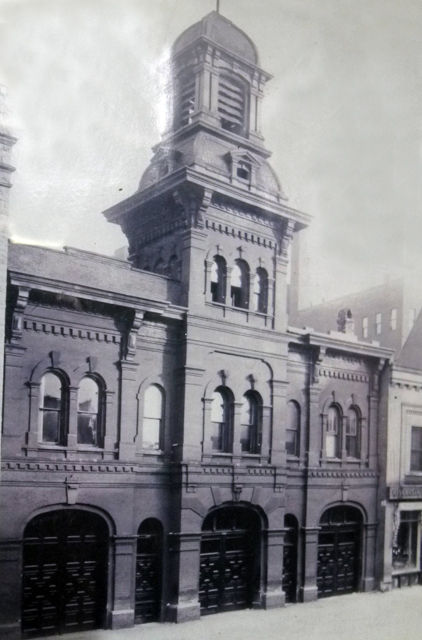 Toward the back was another tower where a watchman was stationed 24 hours a day to keep an eye out for blazes in the area. (Note: Another source suggests the back tower was the hose drying tower; the current hose tower is on the south side of the building at about halfway back.)

In 1879, four sliding poles – then recently invented in Chicago by David Kenyon – were added, speeding up response times. In 1891, the first floor and the stables were remodeled.

In 1910, the station housed 27 men and 14 horses. The equipment included a chemical engine, a first class metropolitan steamer, an aerial truck and a hose wagon with 4,000 feet of 2.5-inch C.R.L. firehose.

When a bomb exploded in the Central Police Station just across Wells in November 1917, the firehouse, too, surely trembled and its occupants were the first to respond.

Both towers were removed in 1922. In 1930, the city bought the vacant lot to the north – which since 1880 had been the site of the county jail and, for a while, the sheriff’s office – with a plan to expand the firehouse, but the Depression put the kibosh on that idea and the land was instead leased to Standard Oil. 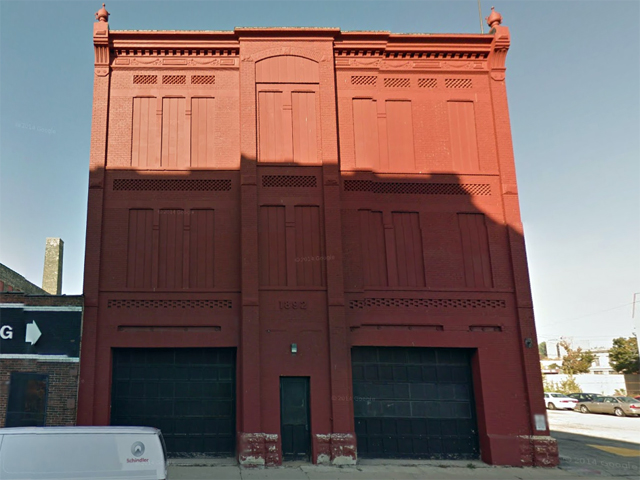 Despite the Depression, big changes were on tap for the historic firehouse. In June 1934, the companies were moved to the firehouse (still standing, but closed) at 1324 N. 4th St. (pictured just above) and the front was pulled off and replaced with the current facade, executed, most surely, by municipal engineer Charles Malig in the en vogue art deco style. 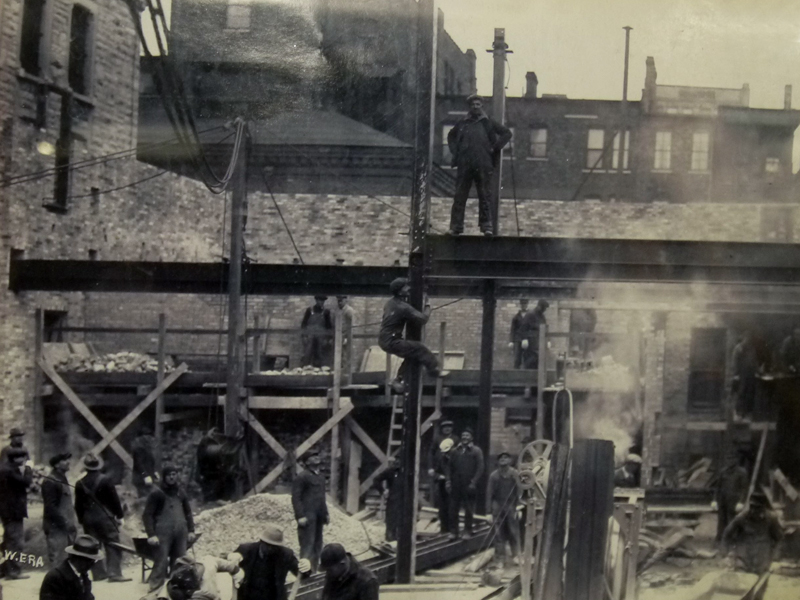 The equipment and companies returned to the bulding on Sept. 4, 1935.

Look at the building from either the south or north side and you can see where the new brick meets the old at the front and along the roof line. 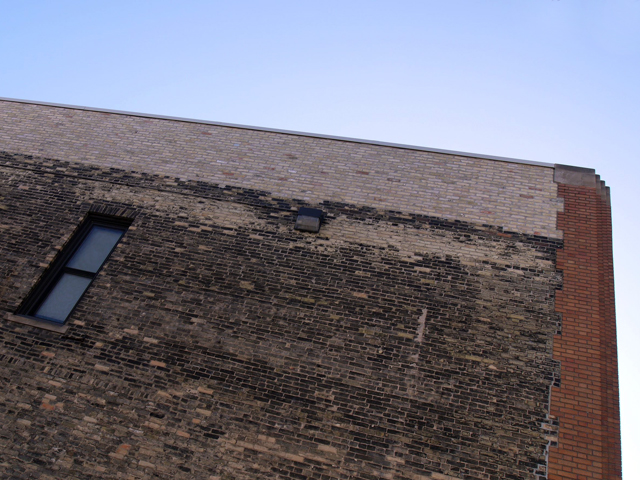 There has been discussion of razing the station on a few occasions, including in 1957, when the Milwaukee Athletic Club, the firehouse's neighbor to the south, expressed interest in acquiring the land to build a parking structure.

Nowadays, the old stables still stand but house – surprise! – a full-size handball and racquetball court with a balcony viewing area. Further back, at what is perhaps the base of the old hose and/or watch tower is a room the firefighters call the bunker. There are some couches and desks with computers back here, where the firefighters do training and education work on the desktops daily.

While the station once boasted four poles, there is now just one, that leads from the dormitory upstairs, down to the equipment below. Also upstairs is the captain’s office, with a view out over Broadway, and another private area for the driver. 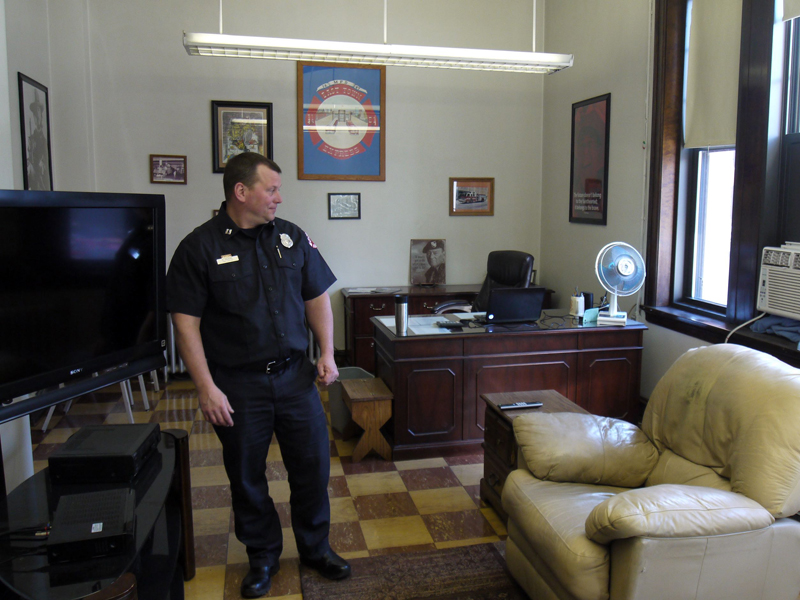 Because of the staff cuts, much of the big dormitory space – which still has its skylight (though it’s boarded up on top and doesn’t admit light anymore) – is no longer needed for beds and a large portion of it sits empty. One area houses a makeshift weight and cardio area stocked with gear donated or purchased by the firefighters themselves. Nearby is a pool table, but it doesn’t look loved and Capt. Rivard admits it rarely sees use.

But perhaps the most symbolic spot these days is located behind the dorm area, at the top of the long flight of stairs from below.

Here there is a wide corridor with 60 lockers. These days 75 percent of them sit empty and unused.