While seemingly half of Milwaukee thinks their houses were once home to speakeasies, the Becker-Fitch House has perhaps the most amazing secret basement bar this town's ever seen. You can go inside during's HMI's Spaces and Traces event this weekend.

If the presence of an iconic giraffe in the backyard hasn’t caught your attention, and the fact that at least three stories of the house at 2344 E. Back Bay St. appear to be built into the side of the bluff rolling down toward Lincoln Memorial Drive doesn’t spike your curiosity, consider this...

While seemingly half of Milwaukee thinks their houses were once home to speakeasies, the Becker-Fitch House has perhaps the most amazing secret basement tavern this town’s ever seen. 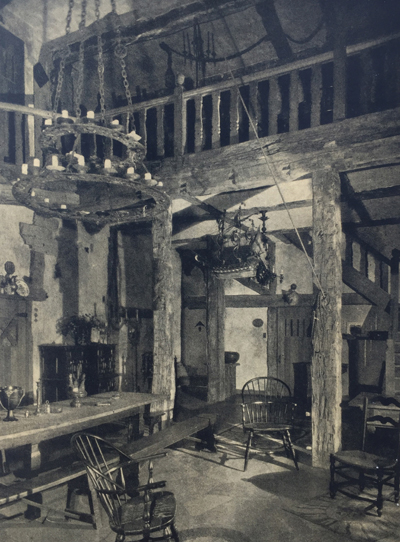 The home – or at least one amazing room of it – will be open this Saturday, May 14, from 9 a.m. until 5 p.m. as part of Historic Milwaukee Inc.’s annual Spaces and Traces event, which this year features the East Side’s Historic Water Tower Neighborhood.

First, a little history of the house, which was designed by William D. Kimball in 1895 for William Becker, who owned an eponymous leather company in town. Additions were made in 1897 and 1901.

Back in those days, the waves of Lake Michigan lapped at the bluff next to the house and across Back Bay Street – which was, until 1917, called Terrace Court – stood a trio of homes whose backs faced the nearly oval Woodland Court, which was subdivided into more than 20 lots, six of which hosted homes. Nowadays, that land across the street is Back Bay Park. 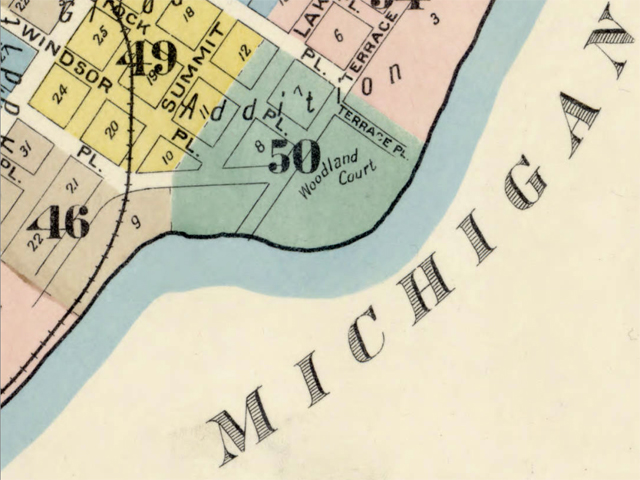 In 1915, Milwaukee Road founder Albert Earling bought the gorgeous French provincial chateau-style house, with its turrets and gables, its barn topped with a large, open summer room, and its skylit conservatory-style greenhouse for his daughter Harriet and her husband Lawrence Fitch, who was president of Wisconsin Malleable Co. 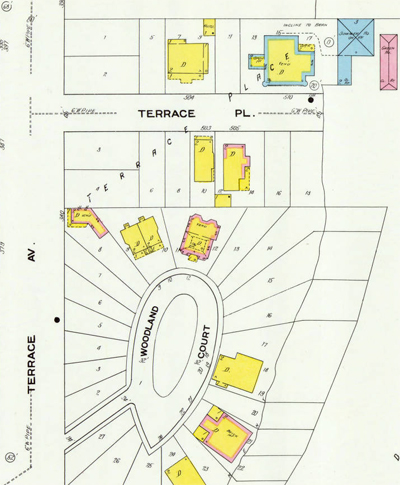 A year later, the Fitch tapped his friend, architect Herman Buemming, to remodel the house, building an addition atop the greenhouse and, later, in the 1960s. the chateau wing and some other sections were demolished.

In 1922, the Buemmings and the Fitches cruised from Key West to Havana, during which time the idea for an entertaining room may have been broached and the next year, Buemming teamed with Alexander Guth to design such a space on the lower level of the Fitch home.

Accessed via a spiral staircase hidden behind a panel in the wall of the living room above – the panel was later further obscured behind one of the French tapestries Harriet brought home from Europe in 1927 – the so-called Tavern Room (which was described as a den in official paperwork since Prohibition was in force at the time) is a two-story entertaining space, partially above ground and partially below, that is executed in a rustic style that recalls a 17th century Irish pub. 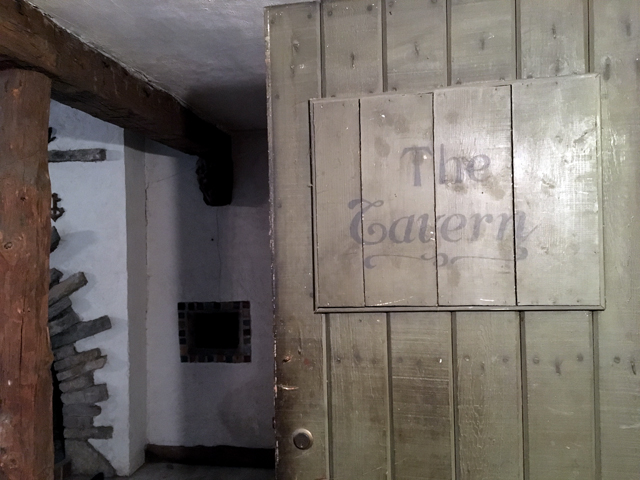 Hidden behind the visible heavy wooden beams – many of which were recycled from area barns – is a substructure of bolted steel beams.

It’s quite amazing to behold. The spiral staircase deposits you in the balcony, where you can gaze over the rough-hewn balcony giving on to the main area below, with its large fireplace and rustic plastered walls dotted with a variety of tiles and motifs. Directly across the open space was an organ loft, now covered with wooden panels. 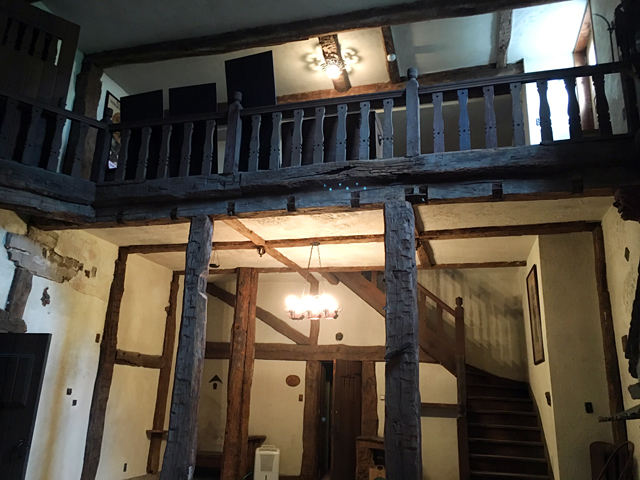 Up here – and in other parts of the home – are original World War I-vintage posters that aimed to raise funds for French war orphans. Harriet Fitch was instrumental in organizing a campaign among children at dozens of Milwaukee Public Schools to support this cause. 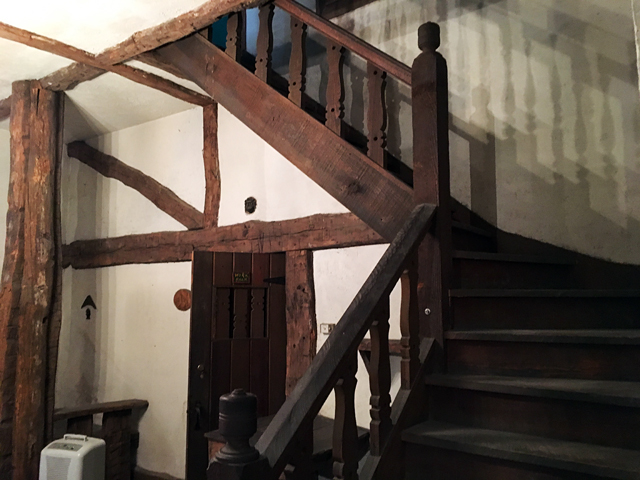 Follow the steps down and you can see a carved grotesque where balcony meets wall. Off to the sides are some storage areas for wine and other quaffs, which were brought in by boat, since the lake met the house at the bluff back then. 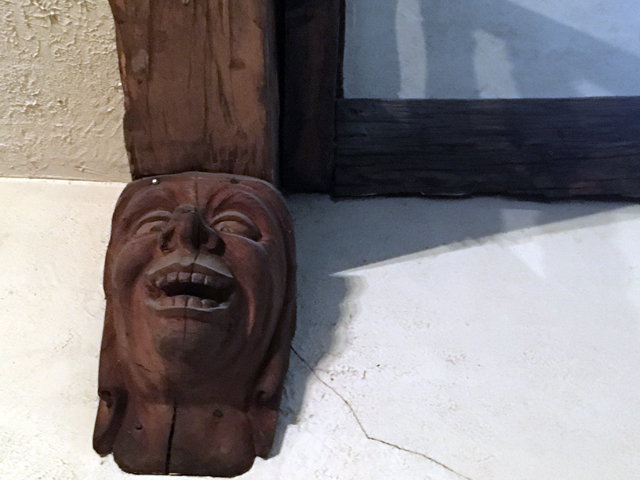 Along the south wall are some built in cabinets. One has an old icebox and another was filled with a shortwave radio used to maintain communications with the marine liquor delivery vessels. Though the radio itself has since been donated to The Pabst Mansion, a web of wiring remains dangling. 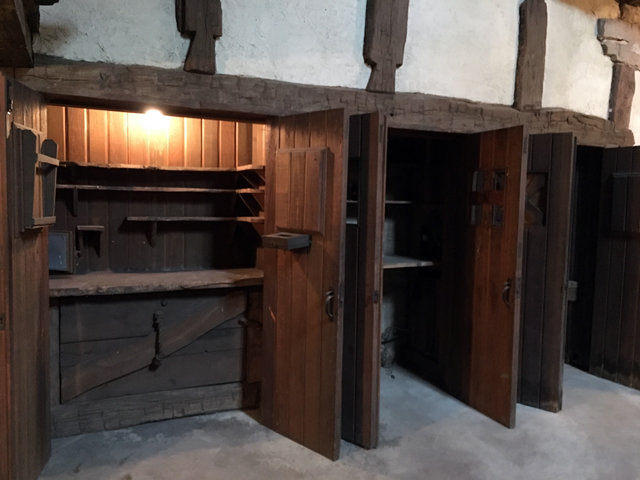 The space was also graced with ironwork by Cyril Colnik, though much of that has since been donated to Villa Terrace a couple lots up the bluff. Gas and wood stoves stood in the room and a large model schooner hung from the ceiling.

Alas, poor Mr. Fitch didn’t get much time to enjoy his home pub, as he died in 1924. But his widow made the most of it. In 1926, the Milwaukee Sentinel noted that she hosted a visiting group of 21 students from Yale – her husband’s alma mater – at the house (surely they visited the Tavern Room), and after she married attorney Frederick Thwaits in 1927 they continued to entertain in the space. 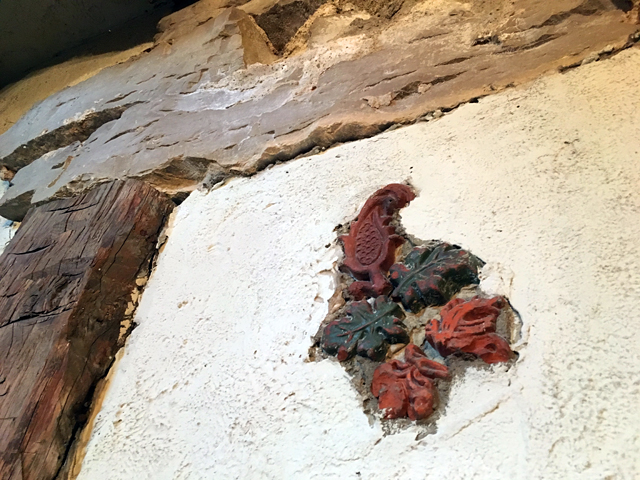 In fact, best as anyone can tell, the room stayed in commission at least until Harriet (by then the widow of Walter Dake) died in 1962 at the age of 85. After her passing, the Milwaukee Journal called Harriet, "Milwaukee’s undisputed social leader."

The following year, according to Harriet's wishes, the furnishings auctioned off and the house was readied for sale. Family members bought the home from the estate, and it now belongs to her granddaughter-in-law, Mrs. Thomas S. Van Alyea Jr.

In 1964-65, the western end of the chateau (which the Journal acclaimed as "a monumental landmark on Milwaukee’s lower east side) was lopped off – apparently to create space to build the brick home than now stands next door – its roof flattened out and its turret removed. An apartment was created on the lower level, just outside a door to the Tavern Room.

Though when I got a peek, I was lucky enough to get to see the old ballroom, the gorgeous plastered ceilings in the living room, the painted motifs on the cabinet doors in the dressing rooms and other interesting features, only the Tavern Room will be open to the public for the tour this weekend.