With its variegated brick, squared approach and collegiate gothic flourishes, Wisconsin Avenue School, on the corner of 27th and Wisconsin, is what many of us conjure when we think of a school. Closed in 2007, the building has now been declared surplus by MPS and now moves to the Department of City Development for potential sale. We went inside and took a look around.

With its variegated brick, squared approach and collegiate gothic flourishes, Wisconsin Avenue School, on the corner of 27th and Wisconsin, is what many of us conjure when we think of a school.

Built in 1920, the school was constructed during a schoolhouse building boom that lasted more than a decade, dotting the entire city with buildings drawn in a similar style: from Hartford Avenue, Riverside and Lincoln on the East Side, to Townsend Street, Franklin, Neeskara and Sherman on the North and West Sides, and Riley, Forest Home Avenue, Lincoln Avenue, Fernwood, Humboldt Park and Bay View High School on the South Side. And these are just a few of many more examples.

Closed in 2007, the building – located in what is now called the SOHI District in the Avenues West neighborhood – was designed by Van Ryn and DeGelleke, who did much work for MPS from the late 19th century until the 1920s, when the district brought Guy Wiley on staff to oversee construction in-house. 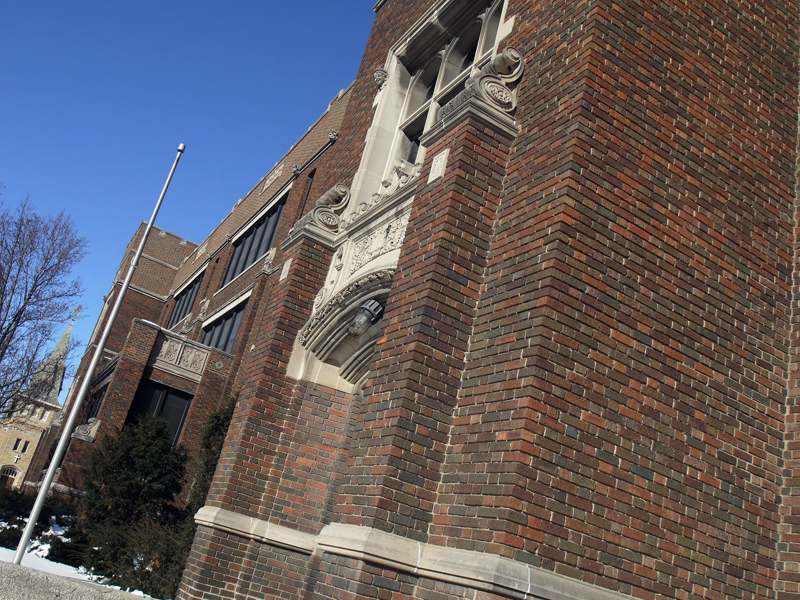 This building, with its ornate entrances, kindergarten room push-out on the Wisconsin Avenue side and cut stone grotesques – each of which wears a unique expression, from hilarious grins to contorted grimaces – replaced an earlier school on the site. Diamond-shaped tile motifs also dot the exterior.

An extensive gallery of photos can be seen here.

That earlier schoolhouse, called Grand Avenue School (there is now a Grand Avenue further east, on 24th and Wisconsin, that was constructed in 1991 during a middle school building spurt) was designed by Ferry and Clas and lost to fire in 1918.

While firmly rooted in what was at the time contemporary schoolhouse design, Van Ryn and DeGelleke’s replacement seemed especially heavy on the gothic, perhaps in tribute to the gothic arches that featured in Ferry and Clas’ graceful facade. 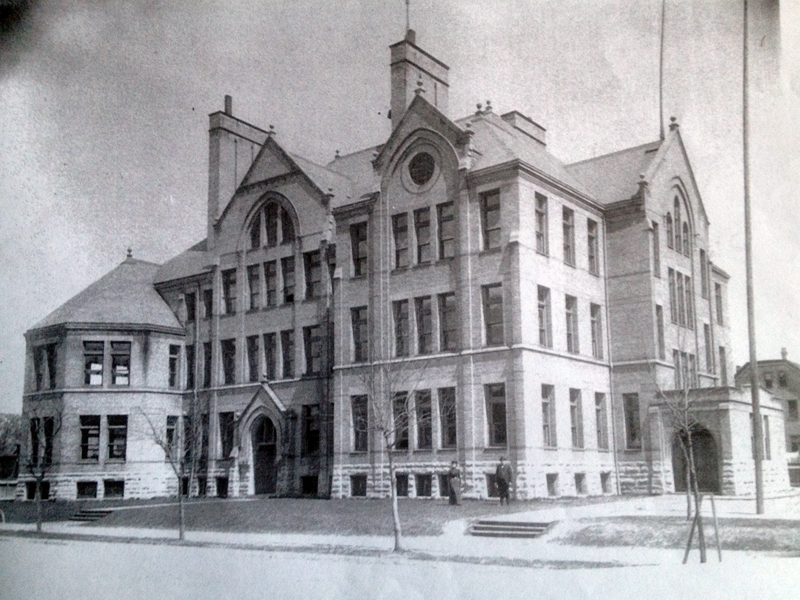 Since 2007, Wisconsin Avenue School has been mostly shuttered, though the district has used it for storage and Highland Community School briefly used a bit of the space before it moved into the old MacDowell Montessori School a couple years ago. Highland had expressed interest in the entire building, but some say it was too big and needed too much work.

Milwaukee Police Department also discussed taking it over and using it for records storage. A floated Teachtown development to create teacher housing – like the project at Dover Street School – didn’t come through, either.

So, it came as little surprise last month, when the school board voted to declare the building – as well as a few others, including 37th Street School and Wheatley – as surplus.
On a recent visit, I spent some time exploring the building, which is quite large, with 26 classrooms, as well as a large auditorium and basement gym/cafeteria with some incredible louvered wooden roll-up dividers to turn one large gym into two smaller ones. 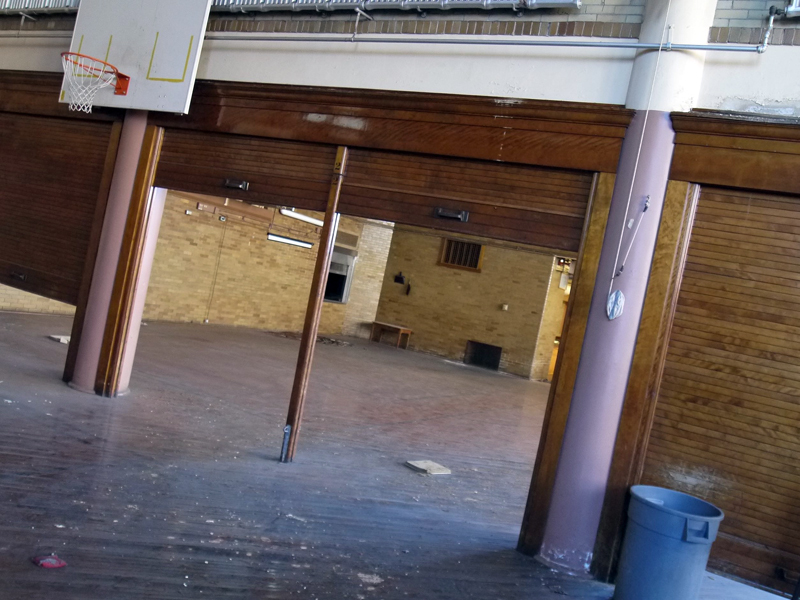 Other kindergarten rooms of the era – such as at Philipp and at Garden Homes (now Lloyd Barbee Montessori) – had built-in sandboxes, but this room has been re-floored so it’s impossible tell whether there was one or not.

The third-floor classrooms offer nice views of the Domes, Miller Park, the Tripoli Shrine dome, the nearby former Mary Hill School, which long served as an annex to the old Grand Avenue School, and taller buildings Downtown.

Inside a pipe run and cold air return, there is evidence of charring that suggests there was a fire in Wisconsin Avenue School, but a facilities and maintenance worker who knows the school well told me he’s seen no other evidence of a blaze, so it’s unclear when or how severe it was.

Like most schools of the era, the entry halls are ornately tiled, there’s decorative plasterwork framing the proscenium around the stage and dark wood trim runs the length of the hallways. Classrooms, storage spaces and offices are also trimmed in darkly stained wood and wooden built-ins. Unusually, the principal’s office has a walk-in vault.

And, as always, the staircases have anti-slide devices, though Wisconsin Avenue’s eschewed studded varies, opting instead for a wavy wooden strip that would almost seem to have the effect of encouraging, rather than discouraging, daredevilry. 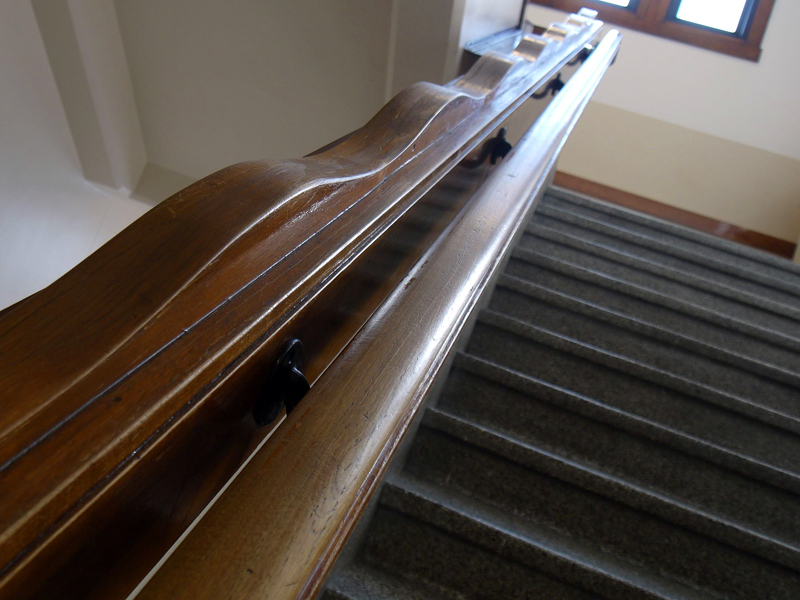 The most touching parts of any empty school are the traces left behind by students. In the hallway, one student lost (or purposely ditched) his report card. In a nearby classroom, a few jackets and a full backpack still hang on cloakroom hooks. Another cloakroom has a plastic grocery bag full of student artwork.

In a first-floor office, origami hangs from a light fixture.

Next to classroom phones, the directory still hangs and there are some names recognizable to folks who follow public education in Milwaukee. 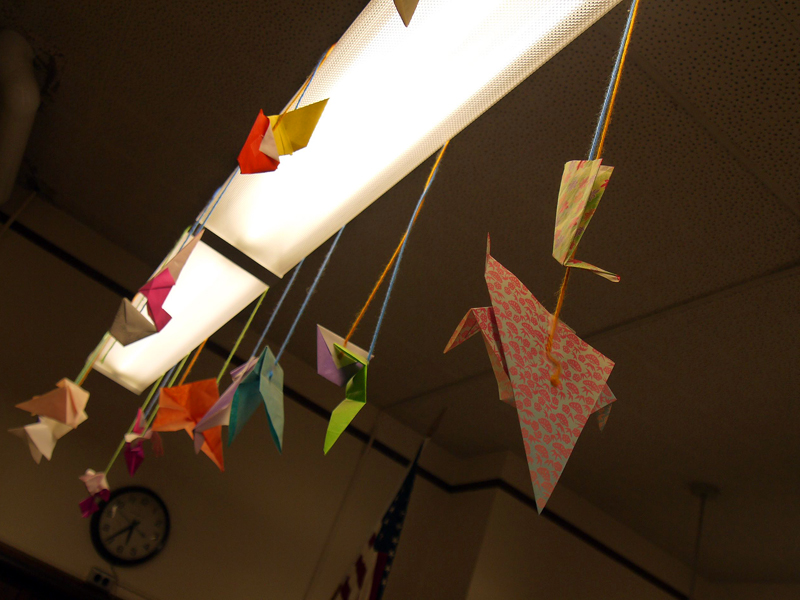 In the auditorium, programs from the school’s 2007 closing ceremony – "Wisconsin Avenue School: Thanks for the memories... When one door closes, another one opens" – are scattered here and there among the flip-up wooden seats.

Now that the one door has closed, what can be expected to open?

Well, the buildings surplussed by MPS are returned to the city and, more specifically, to the Department of City Development, which works to sell them. In recent years, the DCD has sold, among others, the former Jackie Robinson Middle School and Dover Street School, and has moved forward with RFPs for the redevelopment of Garfield Avenue and 5th Street Schools.

"Wisconsin Avenue School, like many buildings in the near west side, represents the vision, life and stories of the people that have come before us," says Keith Stanley, executive director of Avenues West Association. "It is important that we as a community respect the prior life of these buildings while at the same time develop a process to review, repurpose and hopefully reuse these beautiful assets."

According to sources at the DCD, the next step is for the department to collect property information, including building plans and asbestos reports, and conduct an inspection.

Then, says Elaine Miller, who leads the charge to sell the buildings, "We review property information in light of area plans, zoning and market data to determine a disposition recommendation. I will then consult with the local member of the Common Council and neighborhood groups in certain instances."

That work will begin for Wisconsin Avenue and the other properties declared surplus in January after the DCD completes the same work for another group of buildings the district returned to the city in December.

"Other circumstances affect the schedule," Miller added, saying, "I expect the analysis to begin in April or May."

An extensive gallery of photos can be seen here.