SportClub to open at the end of February, in time for March Madness

In October, we brought you the news that the long-vacant Blackthorn Pub space had been acquired by Mike Eitel, entrepreneur and owner of Nomad World Pub on Brady Street. Today, we have more details on the concept going into that space.

In October, we brought you the news that the long-vacant Blackthorn Pub space at 750 N. Jefferson St. had been acquired by Mike Eitel, CEO of Caravan Hospitality Group, which operates Nomad World Pubs in Milwaukee and Madison and Panga Bar and Grill and Nomad Boardsports in Summit, in Waukesha County.

SportClub, a sports bar concept which promises to be unlike any other, is on schedule to open in late February, according to news released today. SportClub will join Caravan’s growing number of entertainment venues, including Nomad Nacional, a pop-up bar at the former La Fuente Restaurant on 5th Street which will host Eitel’s World Cup "Fanzone" for a month starting in mid-June.

According to Eitel and his team, SportClub will feature an area dedicated to stadium-style seating as well as a private micro-pub. The decor will reflect a design that reflects a 1950s inspired "varsity" feel.

Meanwhile, a private event space called The Boot Room will accommodate groups of up to 30. The space will feature three television screens and a private bar. people for private events or to watch their favorite teams on three screens with their own private bar. In addition, a patio and sidewalk cafe are also slated to open later this year. 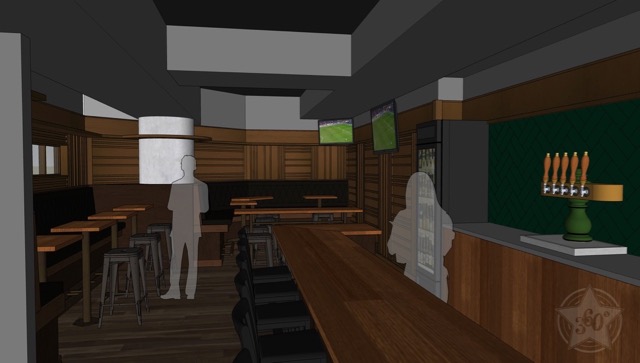 THe bar will feature 30 beers on tap, a lengthy list of champagnes, a mimosa menu, as well as craft cocktails - all inspired to help celebrate what Eitel calls "the sport of celebration."

On the edible side, SportClub will offer an extensive menu of both domestically and globally inspired handheld street food.

"SportClub is unlike any other sports bar I’ve ever been to," Eitel says. "Regardless of your sport preference, or whether you even care for sports at all, there will be something for everyone at SportClub."

SportClub plans to be open for lunch, dinner, and weekend breakfast. Carryout will also be available at ordering windows at the venue’s concession stand for lunch, happy hour and late night carryout.

Watch OnMilwaukee for additional details about SportClub as they develop.