Nearly four decades ago, Sprecher Brewery was a small start-up tucked away on the Burnham Canal in Walker's Point, trying to figure out how to make its mark on the beer industry in a brewing town still ruled by Miller and Pabst. Now, Sprecher is moving into the future with new owners.

Nearly four decades ago, Sprecher Brewery was a small start-up tucked away on the south bank of the Burnham Canal in Walker’s Point, trying to figure out how to make its mark on the beer industry in a brewing town still ruled by Miller and Pabst.

Founder Randy Sprecher, an Oregon native who landed in Brew City to work as supervisor of brewing operations at Pabst, had struck out on his own to create not only Milwaukee’s first craft brewery – a pioneer in the state – but also to brew up some of the best craft root beer anyone had tasted.

Thirty-five years on, Sprecher is the godfather of craft beer in the city and a leader in craft sodas, too. Its Amber and Black Bavarian beers, as well as its root beer, have become iconic quaffs in Wisconsin, and its brewery tour is a tourism hotspot.

When Randy Sprecher decided it was time to retire, he sold the brewery to a team of local investors that include former MolsonCoors Wisconsin GM Jim Kanter (pictured at right), who says that what Sprecher built is what drew the attention of the hometown investors. 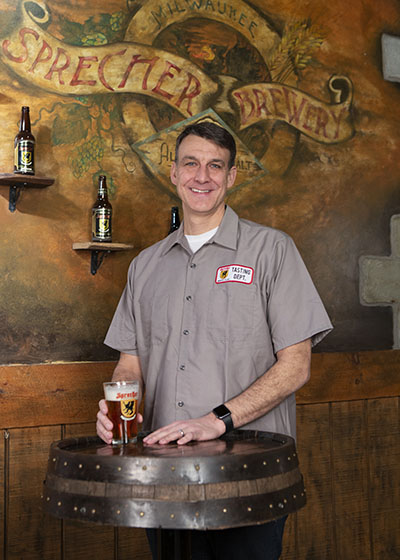 "It is one of the main reasons we loved the opportunity with Sprecher," Kanter tells me. "It all starts with great products and a great reputation. The products can’t be replaced … and a reputation takes years to build.

"We feel there was a great head start. The people here who have been part of those great products are dedicated to keeping that tradition alive, as are we."

Taking the Sprecher tradition and building on it is what the new owners hope to do.

"As with anything, there are always opportunities," says Kanter. "The market has evolved over time. The expertise in brewing craft beers and sodas we have are phenomenal. We need to evolve a bit with new products and skate to where the puck is going with soda and beer."

That, says Kanter, means introducing new products on both the beer and soda sides, with the beer line getting a new brew first.

ReFresh Button, a juicy IPA – with a sessionable 5 percent ABV – aimed at easy summer drinking, will launch in a few weeks.

The name works on a number of levels right now, as Sprecher refreshes with new ownership, as the entire world gets ready to click the refresh button after the shutdown and because who doesn’t want a refreshing 5 percent juicy IPA for the patio right about now?

Kanter says that Sprecher is thinking outside the beer-and-soda box, too, as evidenced by its sparkling water and hard seltzer lines.

"Quality craft beer and craft sodas has always been the cornerstone of the brand," he says.

"We, of course, will continue to make that a big part of what we do and how we do it ... but may look at it even broader as craft alcoholic and non-alcoholic brands. As you know we have a great line of hard seltzers in Raspberry Zipper and Old Fashioned, as well, and non-alcoholic sparking waters in eight different flavors.

"As trends such as flavor exploration, health and wellness and above premium refreshment continue to be big for consumers we want to be there in both the non alcohol and alcohol side. We can learn and see what is going on with consumers in both to lean into our next innovation quickly."

I ask Kanter, with a smile, if one of the guiding principles right now is "don’t screw it up"?

"Ha," he laughs, "that is the right question. Don’t mess with success for sure. We have won over 140 awards nationally in both the craft beer and craft soda worlds. Not changing how those products are made is something we want to make sure we are clear we have not done.

"However, building on new items that are very consistent with what is happening in the market is key, such as all natural ingredients with additional new items, types of flavors people like, growth in areas such as the energy segment and what style of beers are people drinking more of – and less of – in the market."

The new team will have its hands full, especially considering it bought a brewery just weeks before the coronavirus pandemic wreaked havoc on the economy, shuttered many of Sprecher’s main customers – bars and restaurants – and paused its popular tours.

Sprecher responded by reassigning workers to other tasks to avoid layoffs and by offering bonuses to its employees. That’s an impressive statement to a staff that might have wondered what to expect from the new leadership team.

Is there also a challenge in that, for the first time in nearly 40 years, Sprecher will be run by folks whose surname isn’t on the label? Beyond the name, Randy and Anne Sprecher were storehouses of vast institutional memory and knowledge.

Kanter says that the change allows Sprecher to salute its rich history but also to evolve.

"We look at that as a great opportunity," he says. "Heritage and authenticity matter to people and we certainly have that right here.

"It goes from first being a name, to then being a great brand. Consumers evolve and trends evolve. We want to make sure we put the same quality into anything new and innovative that was done in 1985, as will be done in 2020 and beyond."

What that means is that consumers can expect more flavors from Sprecher in the near future.

"We’ll have more great innovations to come this summer," Kanter promises. "We want to continue to have fun with the brands on both sides and bring additional energy to them and the market."

When the sale of the brewery was announced, Randy Sprecher said, "This has been my life's passion for decades and I want to see the company thrive. With this talented and experienced group, I'm sure it will."

Sounds like he knew what he was talking about.