Urban Spelunking: A look inside the old St. Anthony's Hospital

Recently, St. Ben's announced that it would renovate the former St. Anthony's Hospital, 1004 N. 10th St., into supportive housing for the homeless. Soon after, a fire broke out. Before this weekend's benefit concert for the project at Turner Hall, we went inside to see the old hospital.

About a month after a plan to renovate the former St. Anthony’s Hospital, 1004 N. 10th St., was announced at the end of October, fire trucks pulled up to the closed building. Thankfully it was a small fire that didn't derail the project. 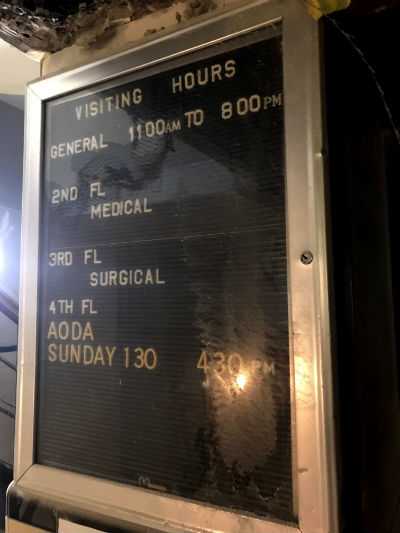 On Oct. 30, Capuchin Community Services officially announced that the former hospital, built in 1931 – and designed by architects Erhard Brielmaier and Sons with what the Wisconsin Historical Society calls, "modest Period Revival elements take from both the Classical and Mediterranean Revival styles" – would be converted into 60 supportive apartments for folks getting back on their feet after bouts of homelessness and incarceration.

The Capuchins run St. Ben’s Community Meal right next door and the House of Peace on 17th and Walnut, providing food, clothing and pastoral care to the homeless and to Milwaukeeans at risk of becoming homeless.

The development project is being undertaken in collaboration with Chicago-based Heartland Housing.

It looks like former St Anthony Hospital, currently being converted to apartments, is on fire. @MilFireDept reportedly has blaze under control. https://t.co/deXWbHnAIA — Bobby Tanzilo (@BobbyOnMKEcom) December 5, 2017

Did the fire set work back at all?

"Not a bit," said Br. Bob Roemer, ministry director for Capuchin Community Services. The goal is still to have the building ready to receive tenants by October, he added. 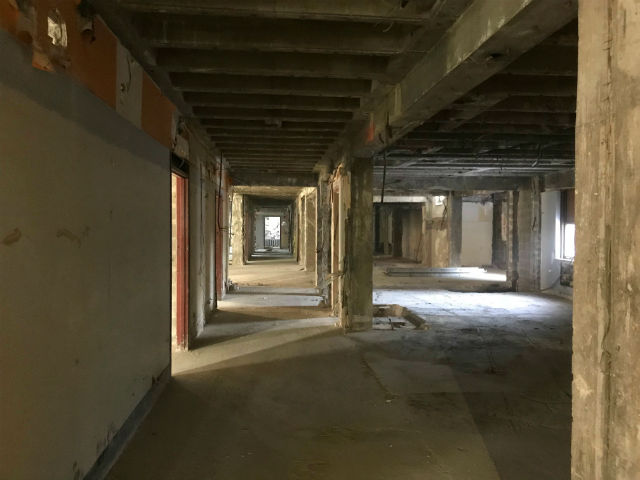 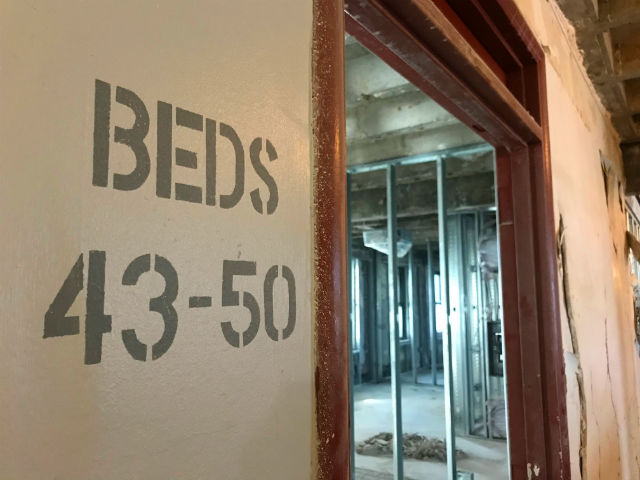 To help fund the project, Capuchin Community Services has teamed up with Five O’Clock Steakhouse and a list of other sponsors for a benefit concert at Turner Hall Ballroom on Sunday, Feb. 11 at 6 p.m. 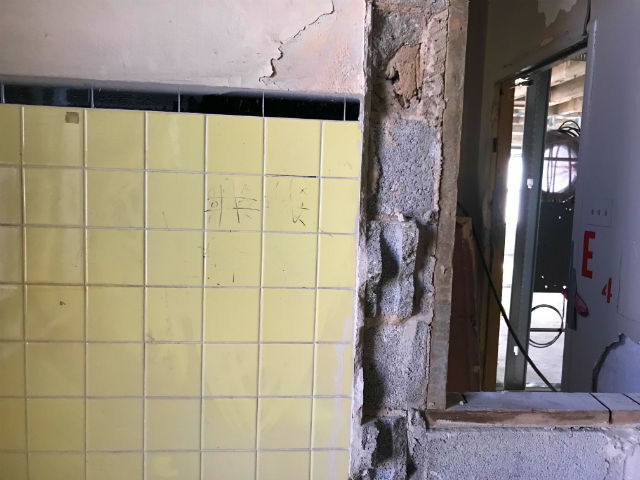 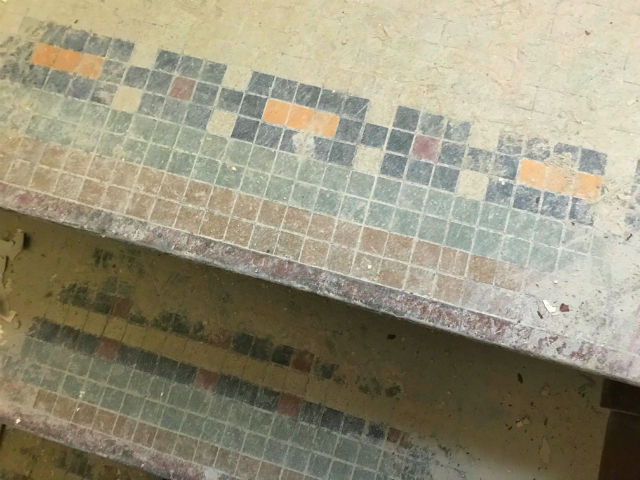 St. Ben’s has a long relationship with the former St. Anthony’s building. It was St. Benedict the Moor – founded in 1908 as a mission to serve Milwaukee’s then-growing African-American population that lived in the neighborhood at that time – that opened the hospital as a place for African-American doctors and nurses who were shunned by most other health care institutions in the city.

When it opened, St. Anthony’s had 42 beds and cost $98,190 to build. It was staffed by the Franciscan Sisters of the Immaculate Conception. 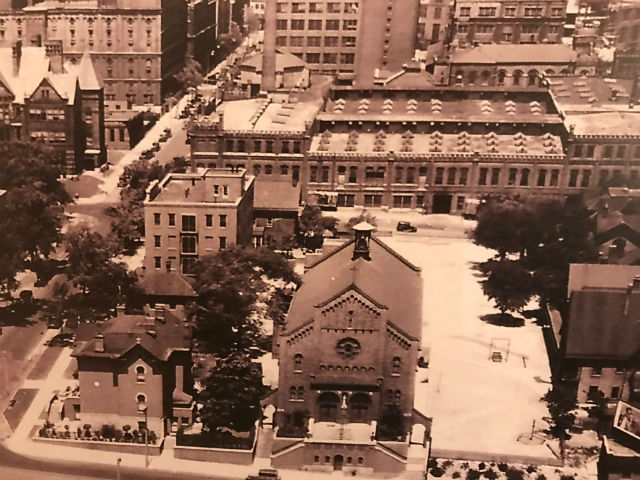 You can see the original hospital building, pre-addition, in this photo.

The part of the building fronting State Street is a large addition, erected either in 1947 on land that was once home to St. Ben’s rectory. The new construction roughly doubled the size of the building, bringing the capacity up to 135 beds.

According to a history written by the Wisconsin Historical Society – which added the building to its State Register of Historic Places in 2017 – the hospital's mission, "from the start was to serve all creeds and races at a time when racial discrimination limited medical care options for many African-Americans. This mission came to fruition and Saint Anthony Hospital’s patient population into the 1960s was approximately 35 percent black and 65 percent white." 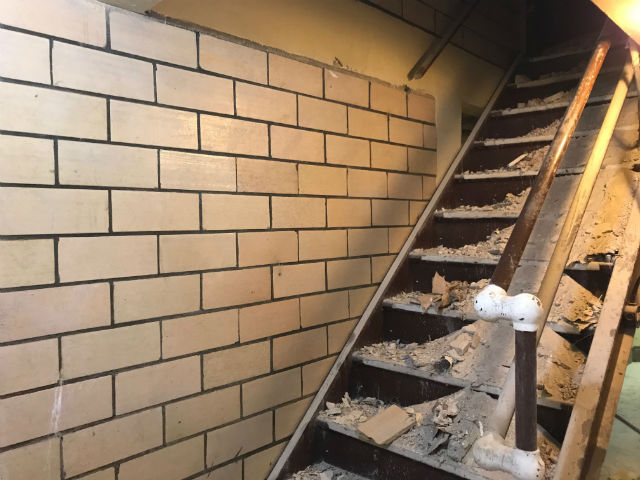 In 1954, the Dr. John W. Maxwell, Sr. was elected chief of staff by the doctors at St. Anthony's, making him the first African-American hospital chief of staff in the state and one of very few anywhere in the United States.

A group of nurses at the hospital founded the St. Ben's Clinic at the in 1980.

The former hospital became the St. Anthony Family Medical Center in 1987 and closed a year later.

The building was also used for a time by the County House of Correction Huber Program.

The lower level of the building – the northernmost portion of which will remain home to the Milwaukee Medical Examiner's Office for now – will have service areas like laundry and shower facilities, which will help St. Ben's offer these services to more of Milwaukee's homeless on a daily basis. It will also have a common area that will allow many of the folks who arrive seeking services to wait inside instead out front on State Street as they currently do. 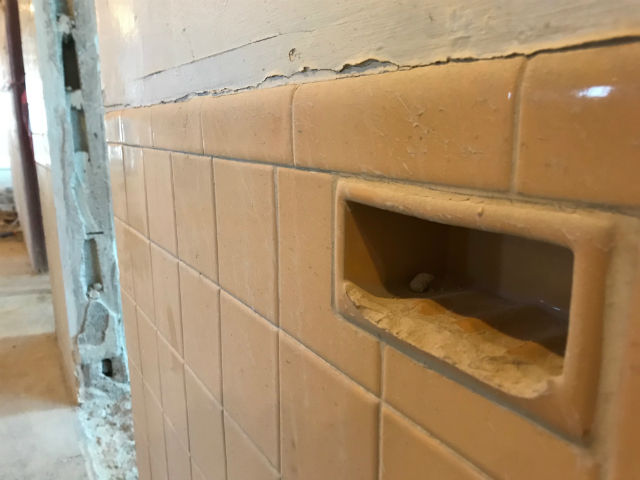 Likely due to a change in layout, this hallway has a built-in tile soap dish.

The mission's health clinic, run by Ascension, will move from one of three connected former private homes donated long ago to St. Ben's into the first floor of the former St. Anthony's and St. Ben's will move its parish offices there, too. An after hours parole office will also be located there due to the building's proximity to the courthouse and county jail.

There will be some apartments on the second floor, which will also house Heartland Housing space for things like the building manager's office.

Cramped old elevator shafts are being closed up and a new, wider elevator is being installed. 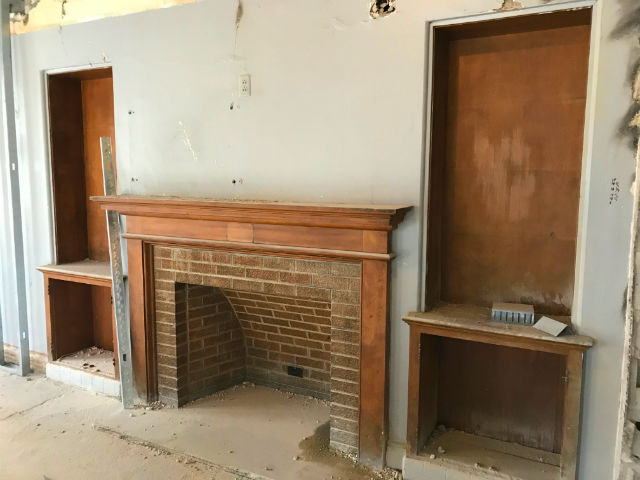 Some surviving hospital details, including tiling on walls and floors, as well as iron stairwell banisters will remain in place wherever possible. This includes a brick fireplace in a space located in the bay jutting out toward State Street that was likely the office of the chief of staff.

According to Roemer, it's unclear what the future holds for the three homes along 9th Street once the offices housed there are moved into the former hospital.

At the moment there's a lot of dust, a lot of noise and what looks like a long way to go, but Roemer said the work is on schedule.