Downtown landmark church will close; transform into a wedding/events venue

St. James Episcopal Church, which has made its home at 833 W. Wisconsin Ave. since 1851, will close its doors at the end of this month. The building, which was put up for sale a few years ago is in the process of being sold. It will be transformed into a wedding and events venue.

St. James Episcopal Church, which has made its home at 833 W. Wisconsin Ave. since 1851, will close its doors at the end of this month. The building, which was put up for sale a few years ago, is in the process of being sold.

According to the church's pastor, Father John Allen, the final worship service will be held on Oct. 1 and the diocese will hold a closing service on the evening on Nov. 1.

"The church will be secularized," Allen said. "The bishop or his representative will come and say a prayer to say, 'we blessed you but now we're taking it back.'"

Allen said the sale of the building is expected to be finalized in November.

He added that a group of partners – including developer Josh Jeffers, Shawn Hittman and The Hidden Kitchen owners Oliver Hunt and Kate Crowle – plan to open a wedding and events venue in the building.

"People can have a wedding in the hall upstairs. The food program will be turned into a Class A kitchen and they're adding an elevator to the third floor, which will become a reception area with a bar and a dance floor."

"They'll probably put a million dollars into the building," he said. "They're going to take their time to revamp it."

Hunt said the new venue will continue to be called St. James, "for the history of it," and that Engberg Anderson Architects has been tapped to do the design work.

"Really what we're shooting for is not just weddings, but events of all kinds. The sanctuary will be perfect for weddings, business meetings, maybe the odd fashion show. What I call the back ballroom will be another venue, with an open showroom kitchen. That would be suitable for events with visiting chefs."

Hunt said he envisions buffet food service in the sanctuary, with a focus on plated dining in the ballroom, though clients would be involved in such decisions for specific events. He said there is no plan to open a public restaurant at St. James.

"I'm really not into that," he said. "My restaurant days are (behind me). The food truck is enough for me."

I wrote an Urban Spelunking piece about the church and the remnants of the burial ground atop which it was built, a few years ago.

Frankly, it's amazing that the church has survived as long as it has. 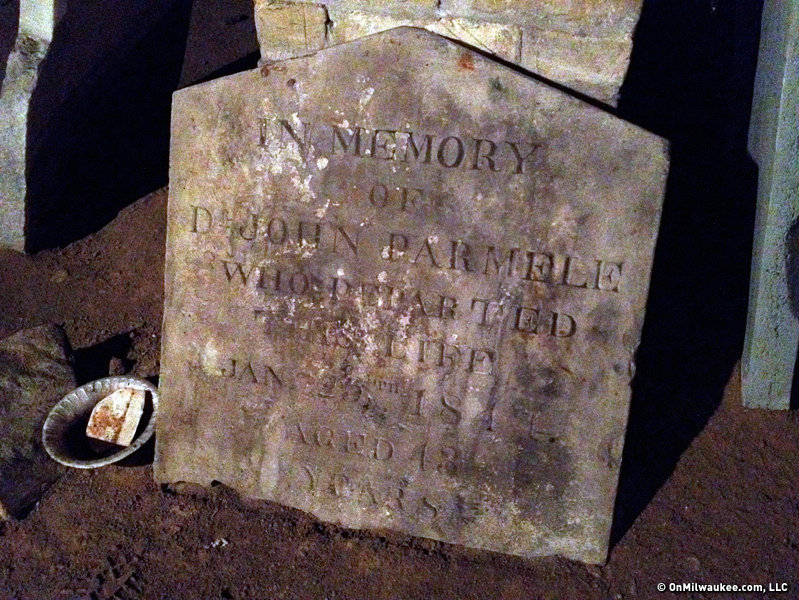 When I visited the beautiful St. James Episcopal Church in 2013, things were already looking bad. Despite its central location, its historic Milwaukee home (built in 1867 and rebuilt after an 1872 fire) and the services it provides to the community – especially its food kitchen and clothing distribution services for the homeless, as well as its members that attend funerals of the indigent so they won't be sent off into eternity alone – the church has had a dwindling congregation.

That has caused revenue problems exacerbated by repairs and upkeep costs on its 19th century building.

"It's a building that outlived its time," Allen said, "and a congregation whose neighborhood disappeared. On a good Sunday there could be 40 (worshippers). Forty people can't pay $27,000-$28,000 every year just for the insurance on the church. The congregation did a lot of good work but that didn't bring revenue in to fund the building. In the end, the building won.

"It's hard for the people who have been there for 25 years, 30 years, but but this is going to happen to many more congregations in the next 10 years than we realize."