The Wisconsin State Fair is Aug. 2-12, and while that means entertainment, jobs, rides, competition, animals and various other aspects of summer, to me, it means FOOD. Here's some thoughts on the new choices this year, announced this week.

The Wisconsin State Fair is Aug. 2-12, and while that means entertainment, jobs, rides, competition, animals and various other aspects of summer, to me, it means FOOD.

I always put together a list of food I need to find at the fair. This list started innocently as a handwritten reminder to myself of the voluminous choices I could no longer leave to chance. It has evolved into a formal checklist that I am happy to share with others.

The first is that, as a honored Sporkies judge, I am privy to trying and anointing the best new foods each year. It is a day I look forward to every year. Not only to tantalize my senses, but to interact with the crowd and my fellow judges. In fact, having judged now for the fourth year in a row with LeRoy Butler, we have become close friends.

LeRoy was at my wedding and I’ll be at his. And while I think he believes I, too, was a professional athlete given my ability to tackle massive amounts of food, I sometimes have to remind him that we are not peers. He is Hall of Fame. I am Haul of Food. 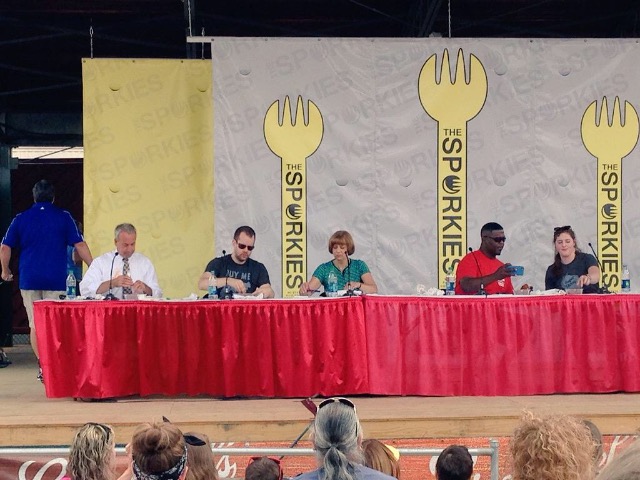 The second disclosure is that, while it takes some time to set up the list, I can’t wait to share some commentary on the new choices this year which were announced this week.

So here goes! As a Sporkies judge, I must recuse myself from anything I say being taken seriously – except for the fact that I will never miss an opportunity to have fun eating at the Wisconsin State Fair!

Every once in a while, someone like Edison or Jobs or Marconi changes the way we live. Slim’s PBR Park has done just that. A wonton with caramelized onions, mozzarella and Swiss, deep fried and on a stick with onion au jus. This has solved the age old prohibition of eating French onion soup on a first date.

Oh, Machine Shed. You had me at bourbon.

Nashville is known for its hot chicken. Maybe its music too. Wisconsin is known for too many things to list. But chief among our attributes is our ability to take fine food item and make it into something that frees up your other hand for drinking.

Which brings us to this, from Water Street Brewery: a mashed potato mix loaded with cheese, corn and fried chicken, injected with beer gravy, then breaded, fried and dipped in hot sauce.

When I was a little kid and loved Popeye cartoons, I dropped a can of spinach on my foot and vowed never to eat the stuff again (that, and eating it wasn’t allowing me to beat up bullies either). I normally wouldn’t go near this, but since I like lasagna noodles and things fired to a golden brown, I would consider it. But when its served with Albanese’s famous homemade marinara, I am all in. In fact, extra marinara please.

If this is literal, All Things Jerky, I accept the challenge.

Pretty simple: a quarter pounder with brie cheese and bacon jam. This Blue Moon Tavern at the Park invention is highly reminiscent of the old commercial where a commoner pulls up to a limo and is asked for grey poupon. "Take a hike Mr. Wall Street. I ain’t parting with my brie."

The bracho concept has been around for some time. I’ve indulged at many a Brewers game. And the walking taco is another age old tried and true endeavor. But this thing, coming in a plastic tub from Sheboygan Brat House, combines the walkability with the glamour of brats of SheVegas, and now we’re talking.

9. Flamin’ Hot Corn on the Cob

Every fair in every corner of the country has corn on the cob. Take it, deep fry it, dip it into spiced mayo crema and dust it with Flamin’ Hot Cheetos, as Slim’s PBR Park will do, and you put yourself on the map.

Mexican Grill will serve up a burrito filled with stir fry noodles, teriyaki steak and Flamin’ Hot Cheetos. I believe the Fair is finding more uses for Cheetos than Sham Wows.

No offense guys, but you make wings from fresh cauliflower florets. I have no problem with cauliflower on the side, but even if you deep fry it and drizzle with buffalo sauce, I am not participating. But if the good people at Slim McGinn’s blindfold me and serve it to me with bourbon, I will happily wait in line. And I do admire the inclusiveness this provides vegetarians.

This camel patty from Exotic Meat Grill is supposed to be crazy hot. Evidently the operative ingredient is Carolina Reaper powder, ranked as the world’s hottest pepper. And you know there will be someone at Wisconsin’s State Fair dressed in Packer zumba pants with a sleeveless Up Nort shirt who will easily handle it – pausing occasionally for a sip of beer, but only because its Monday, Tuesday, Wednesday, Thursday, Friday, Saturday or Sunday.

Jeff Dunham will return to Milwaukee as 2022 State Fair headliner