Does the State Theater/Palms building have a future after last month's fire?

When the former State Theater, 2616 W. State St., burned on Feb. 9, a cry went up on social media as folks who remembered the place as a rock and roll club lamented what looked like the final nail in the coffin of a once vibrant West Side landmark.

When the former State Theater, 2616 W. State St., burned on Feb. 9, a cry went up on social media as folks who remembered the place as a rock and roll club – first The Electric Ballroom and later The Palms – lamented what looked like the final nail in the coffin of a once vibrant West Side landmark.

Built as a neighborhood movie house in 1915, the theater continued to provide the area – and the city – with a variety of entertainments until 1991, when the last tenant, Hoops strip club, closed.

The building has been vacant ever since.

What happens next to the city-owned property has yet to be determined.

"I think a lot will depend on the community support, fundraising efforts and a plan for re-use," says Carlen Hatala, senior planner for Historic Preservation at the City of Milwaukee. 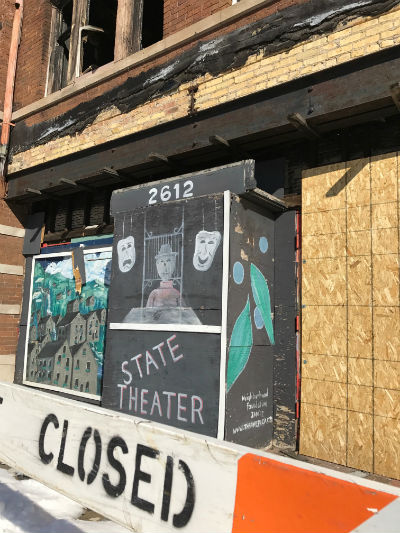 Earlier this week, the city’s Historic Preservation Commission discussed giving the former theater temporary historic designation, but after what one observer described as "much discussion," the matter was held over until next month’s meeting.

But area Ald. Robert Bauman cuts to the chase when he says, "Someone needs to come up with a plan and the money to execute it pretty soon or else demo will probably occur. This building has stood vacant and blighted for over two decades. Now it is even more blighted."

Folks have already been talking about ideas, though it's unclear if any have the funding to turn these ideas into reality.

John Hennessy, who owns the SoHi Building, two blocks from the site, at 27th and Wells, issued what he titled "A Rallying Cry" on Feb. 17.

"Could the big fire at the former Palms Theatre (27th and State Streets) building be a rallying cry? The Near West Side, once a focal area for performing arts in Milwaukee, needs some new energy in the process of embracing its heritage.

"The Palms, a ‘place’ where U2, Tom Petty and the Heartbreakers, Wendy O. Williams, etc. once performed, is in the center of Milwaukee’s Near West Side, and generally speaking, in the center of all metro Milwaukee neighborhoods. It seems some that thoughtful use of its 'place' could serve to stimulate a resurgence of performing arts on the Near West Side and as a gathering place where Milwaukee people could come together.

"Even if only its historic facade were preserved an outdoor performing and gathering place could be created."

Hennessy says he isn't interested in buying and developing the land himself, but is concerned as a neighborhood stakeholder.

A post on the Historic Concordia Neighbors, Inc. email group suggested a similar use.

"Jim Dieter has been working on some ideas for saving the State Street Theater from demolition that we should consider," wrote Robin Muller, a member of the HNCI board, along with Ald. Bauman.

"He thinks we should renovate the theater for events and weddings because of its historical significance. And also had a great idea to have stars on the sidewalk in front to give homage to all the bands that got their start there. A great destination marketing idea to get people to come from far and wide to experience to come to the Near West (Side) of Milwaukee. Similar to Juneau (Avenue) for Harley enthusiasts and the Miller Tour for beer lovers. Or even the how the Rock and Roll Hall of Fame is in Cleveland."

The condition of the building after the fire is surely a major challenge for anyone hoping to save the theater.

I went inside in 2015, a quarter-century after it was last open, and it looked like there could be hope for it, though I’m neither a structural engineer, nor a real estate developer. One doesn't have to be an expert to see that after the fire, it doesn’t look good. The signs warning of asbestos inside don’t inspire much hope, either. 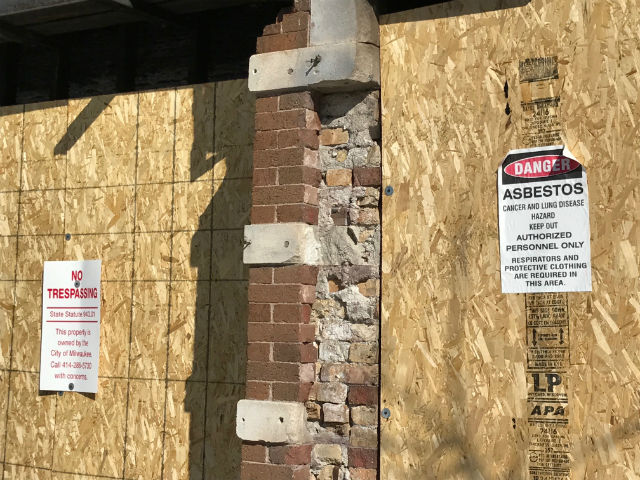 Keith Stanley, executive director of Avenues West, and Near West Side Partners – a group that represents a number of West Side neighborhoods, including Concordia – is less hopeful. And this despite (or perhaps because of) the fact that few likely have worked as hard as Stanley in recent years to jump start development at the former theater site.

"We are very disappointed that the theater had a fire," says Stanley. "At the same time, for the growth and economic stability of this community, I don't see any value in trying to save the theater. For the past 15 years of my career and even before I was on board, there have been many attempts by myself, by residents, by Avenues West, my business improvement district team and Near West Side Partners, by West End Development Corporation, to do development at that site. I’m aware of at least a 20-year history of trying to get some development there.

"We worked with Ko-Thi (African dance company), we worked with the owners of the Rosebud Theater, we worked with developers here in the city and nationally to do development and it’s just a very difficult project. It’s in even worse condition now, and the market conditions aren’t right for a project like that."

Stanley appreciates that some in the community want to restore the theater, but he says the fact that it hadn’t been successfully revived in 25 years before the fire, and then the damage caused by blaze, have further complicated an already tough sell.

"I know there are some people interested in saving it but it’s in worse condition now than it was when were we trying actively, when market conditions were right, before 2008, to package deals together. To have a building site there in its condition now for however long it takes to get a development ... It’s kind of heartbreaking; I dedicated a big portion of my time trying to make something happen there.

"We will support Ald. Bauman, we will support the Department of City Development and support I think the majority of the neighbors who say let’s raze it and get ready for new development."

Stanley also notes that the neighborhood is home to the former Tower Theater, on 27th and Wells, that was designed by the same architects as the Oriental Theater around the same time.

"If I’m going to concentrate on any efforts for a theater on the near West Side, specifically Avenues West, I will focus on the City Campus," Stanley says. "Rick Wiegand has done an amazing job with revitalizing the Ambassador Hotel, bringing it back to its former glory. I’m not saying he can necessarily do that same thing at the Tower, but I prefer to focus our efforts there.

Stanley says he has not heard of anyone interested in developing the property either before or after the fire, but he thinks razing the building and potentially creating a large site – the city owns the building to the west and there is are vacant lots on the block, too – could change that.

"It’d be good to have a nice big plot of land that we can work with a developer on," he says, "but I know there is still some private ownership there and that gets challenging. As near West Side Partners we would be supportive of doing a major development there. At the same time I don’t know the bandwith on what that would look like; how do we deal with the private ownership issues, how do we deal with remediation issues. There are a lot of questions that will be at play.

"But I do think it’s a great piece of land that could really be catalytic for the Avenues West Neighborhood and the near West Side."