The setlist alone was a solid, sophisticated and much beloved collection of tunes that played out to a crowd who knew, and sang, virtually every word. But it was the magic made by the legends themselves that made the evening one to mark down in the record books.

It’s pretty amazing when you have one iconic rock and roll icon playing in your town on a Sunday evening. But what happens when you have two legends playing on the very same stage?

Well, if you ask Peter Gabriel, it adds up to "Milwaukee's own live karaoke night," an apt phrase considering the setlist for the evening, which featured a solid, sophisticated and much beloved collection of tunes that played out to a crowd who knew, and sang, virtually every word.

Milwaukee was the 13th stop on the duo’s 19-city "Rock Paper Scissors" tour, which wraps up at the end of July. The pair, who’ve been friends for years, previously toured together in the '80s in support of Amnesty International. And much like Sting’s 2014 tour with Paul Simon, the hope was to create a unique experience that capitalized on the talents of both iconic personalities, along with the outstanding musicians with which they work. It likely goes without saying that the concept is working.

The evening began with blue light and a mist of fog which turned orange as Peter Gabriel took the stage to perform "The Rhythm of the Heat," a song which set the stage with its haunting introduction and explosive percussive climax. 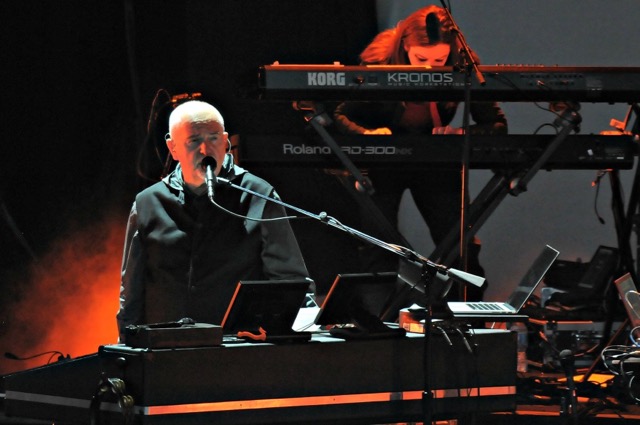 And from there, they were off. Sting followed the opener and maintained the energy with his 1993 hit, "If I Ever Lose My Faith In You", before the two artists came together on stage for introductions and their first collaborative piece, "Digging in the Dirt," a performance during which it was difficult to believe that either musician was in his sixties.

The two bantered a bit, with Gabriel making jokes about doing yoga with Sting, and evoking peals of laughter with a comment about how no one backstage can tell them apart, so they call themselves the "tantric twins." 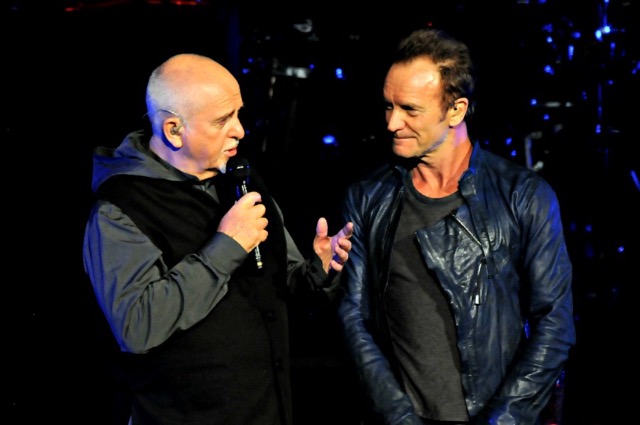 Although the idea of Sting and Gabriel as twins is somewhat comical, the reference is strikingly apt. After all, throughout their nearly three-hour show, they blended their art into one cohesive whole, seamlessly strutting from one man’s work to another without missing a beat.

Even the musicians – who were identified by color, with Sting’s crew decked out with blue accents and Gabriel’s with red – wove in and out of each piece without a hitch, sometimes playing with their respective bandmates and other times collaborating in a similar fashion to Gabriel and Sting.

From start to finish, the show was also immaculately produced, with an exceptional attention to detail. Video screens hung on and above the stage, offering creative imagery that changed with each song. Meanwhile, large side screens offered up a cinematic feast of views of the performers and their bands on stage, giving even the "nosebleed seats" a view to remember.

During Sting’s performance of "Invisible Sun," for instance, images of children from all over the world flashed onto the screens across the stage, offering up metaphoric content on which the audience could ruminate.

And it wasn't simply two artists trading off playing their songs. Both men took songs from the other artist, retooling them to make them his own.

Sting came off almost rappy in his verse of "Games without Frontiers," and belted out Gabriel’s "Shock the Monkey." And there were other moments when the back and forth between Sting and Gabriel gave the impression of a friendly duel. 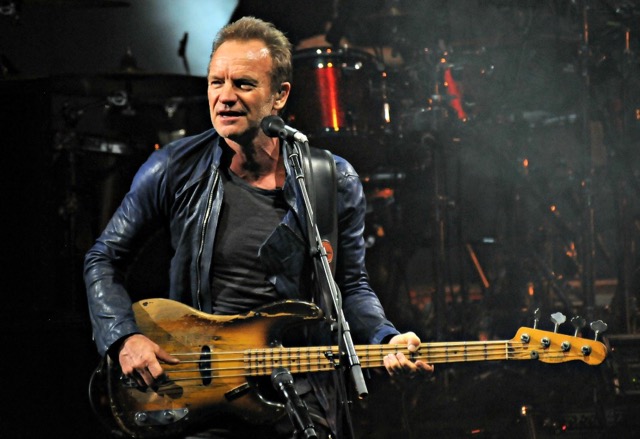 Take for instance, Gabriel’s performance of a sexy jazzed up version of "If You Love Somebody, Set Them Free," during which his breathy (and maybe borderline creepy) vocals aroused a fittingly dramatic reaction from the crowd.

In response, Sting came back with a jazzy electronic performance of "Roxanne," which got even sexier as he transitioned into a breathtaking version of Bill Withers’ "Ain’t No Sunshine" before returning to to give "Roxanne" a fittingly rockstar finish.

And just as the crowd would wind down from a round of hip-swaying sing-along nostalgia, the hits would keep on coming. Gabriel's "Red Rain" offered up one of the more powerful performances, as well as his radio hit "Big Time" and Sting's "Englishman in New York," during which there was a priceless trade-off of verses between Sting and Gabriel, as well as a call and response with the audience with the lyrics "Be yourself," and "No matter what they say."

Well, that was an unforgettable night! #rockpaperscissorstour

Gabriel’s solo debut "Solsbury Hill" was also a crowd-pleaser during which Gabriel skipped around the stage with his band in a sort of buoyant celebration.

Meanwhile, Sting offered up a nod to Gabriel’s Genesis days with the opening lines of "Dancing With the Moonlit Knight" before launching into the Police classic "Message in a Bottle."

Although the two musicians, both of whom have humanitarian leanings, steered clear of overt political references for their Milwaukee show, Gabriel dedicated his moving performance of "Love Can Heal" to Jo Cox, a member of Parliament who was murdered in June for her advocacy for Britain remaining in the European Union.

The show ended with Sting’s performance of "Desert Rose" and a new arrangement of "In Your Eyes," which saw the two Englishmen and their bands busting into dance moves on stage, along with a bit of vocal dueling between Sting and vocalist Jennie Abrahamson.

When the crowd thought it couldn’t get any better, the duo delivered a blowout encore of the Police's "Every Breath You Take" and Gabriel's "Sledgehammer," the latter of which exploded into a bombastic free for all dance party complete with Gabriel’s signature "aerobics-esque" arm movements.

Everyone – the audience included – was clearly having a blast. And it was a more-than-fitting end to an evening filled with old favorites that were transformed by the masters into something unmistakably and invigoratingly fresh.

Fantastic concert tonight at #summerfest #rockpaperscissors. Never underestimate the #power and #passion of #livemusic Thank you #Sting and #petergabriel for a wonderful show. It was truly memorable.