For decades, St. Mary's Academy was an all-girls Catholic school housed in a striking 1904 cream city brick building. However, once nearby Thomas More High School went co-ed, the death knell arrived for St. Mary's, which closed in 1991. Come with us to see inside.

However, once nearby Thomas More High School went co-ed, the death knell arrived for St. Mary’s, which closed in 1991, and soon the building was converted into rental units for non-profit tenants.

The nearly 167,000-square foot complex remains the property of the Sisters of St. Francis of Assisi, who sponsored an independent nonprofit corporation to run the Marian Center for Nonprofits, which provided low-cost space to a wide variety of tenants, from artists to religious groups to educational groups and more, in order to (in the words of the Marian Center web site) "promote human development through education, the arts and social justice in response to human needs." 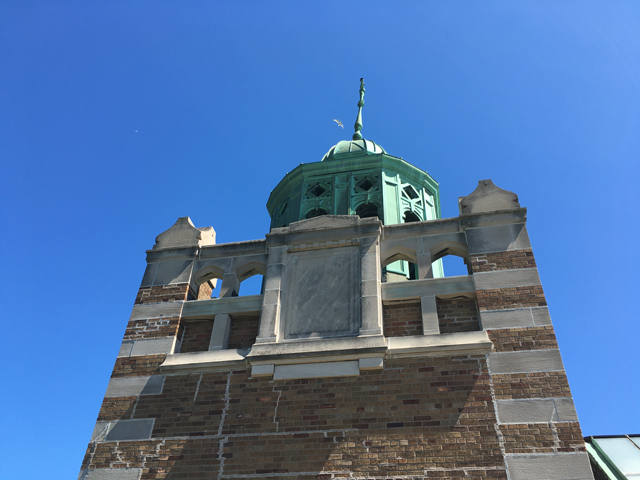 Loretto Hall, built in 1904 and with a major addition in 1921, which led to the relocation of the main entry a bit north (you can still see where it was originally located thanks to differences in the color of the bricks), was later connected by tunnel to Rosary Hall when the latter was completed in 1931.

At that point, it appears that St. Mary's Academy began to use the new building and St. Clare College opened in Loretto Hall in 1932. St. Clare was renamed Cardinal Stritch College in 1946 and moved to its current North Shore location in 1962. 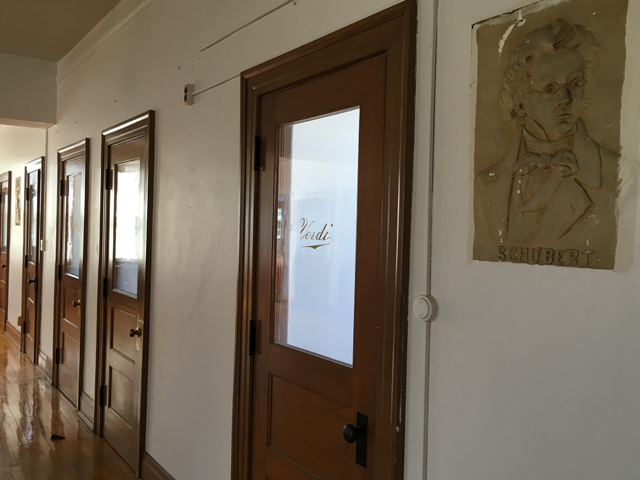 The older building has a number of interesting features, including survival transom lights, original ice boxes in the basement, a suite of music practice rooms (pictured above), an office with a vault filled with original blueprints, old diaries and ledgers and more. 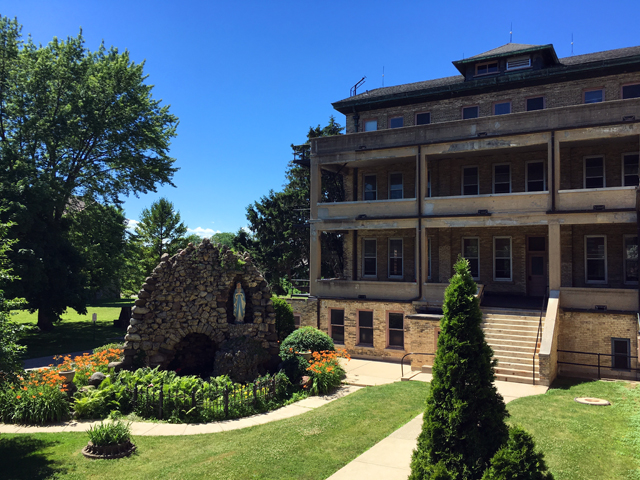 There’s also a chapel that has windows designed by Sister Mary Thomasita Fessler – who had her studio in the complex – and executed by Conrad Schmitt Studios.

In the basement, there’s also a hand cranked freight elevator that’s unlike anything I’ve come across before. 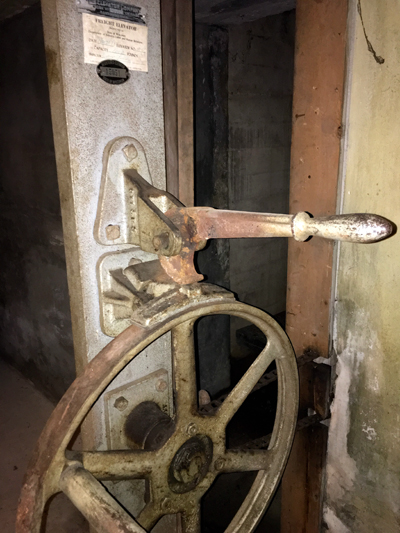 In the early days, many students lived in dormitories at St. Mary’s and their lodgings were in this building. Out back is a rustic-looking stone shrine.

When I visited, one staffer told me that the entrance is the only part of the complex that is in Milwaukee. The rest of it sits in St. Francis, as part of the Sisters of St. Francis’ wooded mini-city. 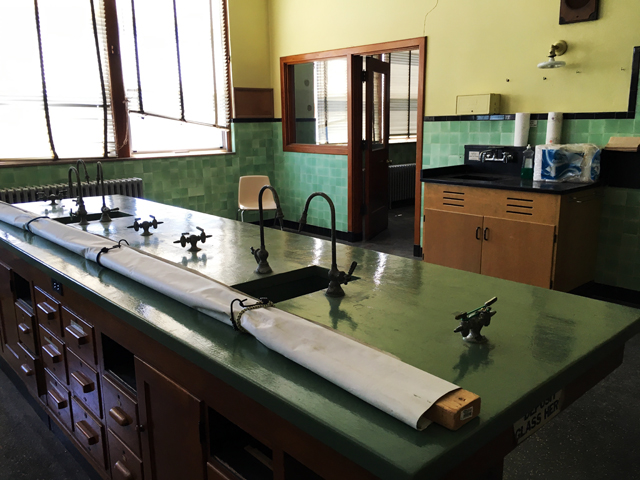 Science labs, a library and home ec rooms still survive with their specialized equipment and furnishings.

The tiled walls in the hallways are decorated here and there with colorful glazed tiles depicting flowers and ships. 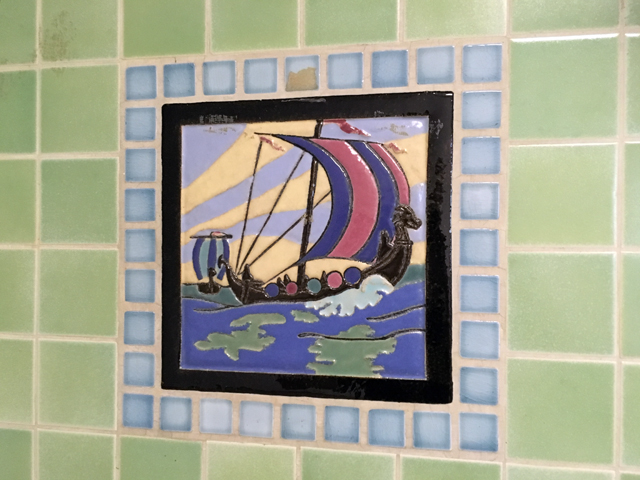 In this building there’s a gym with a viewing balcony with seating ringed above the floor. There’s also a gorgeous auditorium with a spacious entry lobby that’s beautiful enough to recall a movie palace of the era, albeit in a less gaudy, more understated way.

Up above this section is access to the roof and the tower. There’s also a doorway that leads to a catwalk that wraps around the auditorium between the exterior and interior walls. Perfect for a little spelunking. 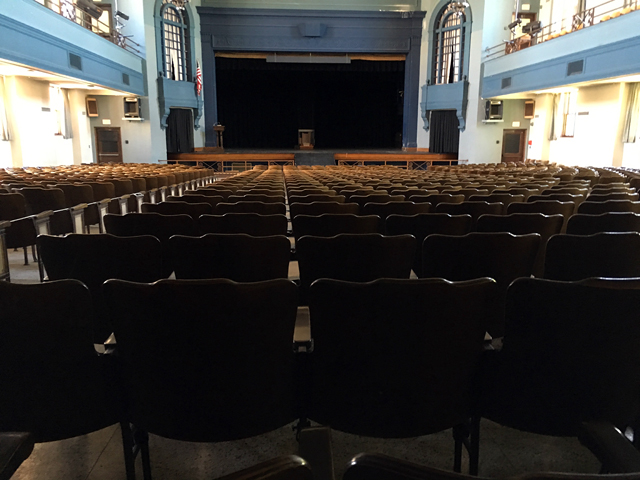 Erhard Brielmaier designed the 1921 addition to Loretto Hall, but it’s unclear if he did the earlier portion too. I couldn’t find an attribution for the 1930 building either.

The bad news for some is that the Marian Center for Nonprofits is no more. At the end of last year, 62 tenants received eviction notices and the stragglers were moving out when I visited in late June to meet a July 1 deadline to vacate. 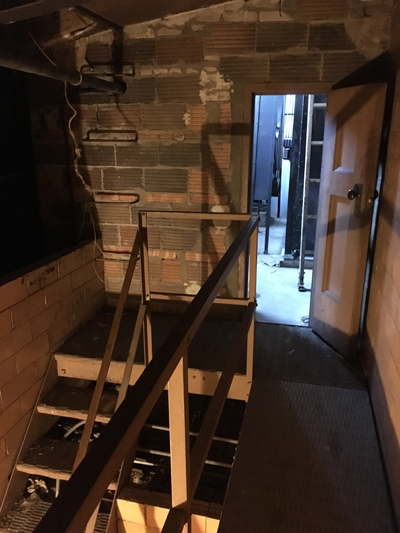 The good news is that despite what some rumors have suggested, there is no plan to raze any of the buildings in the complex. Instead, the Sisters of St. Francis are considering options for future uses for the buildings, though Charlane O'Rourke-Hertig, the center’s executive director told me she was unsure what options are on the table right now.

A few years ago, a plan for a $10 million conversion into low-cost apartments – that included demolishing Loretto Hall – was floated, so presumably residential units is still one potential use.

In the meantime the costs of maintaining the buildings haven’t been matched by the income from the rentals and that led to the closing of the center. But,stay tuned, as these historic structures on the southern edge of Bay View, where Milwaukee meets St. Francis, may well have a bright new future ahead. 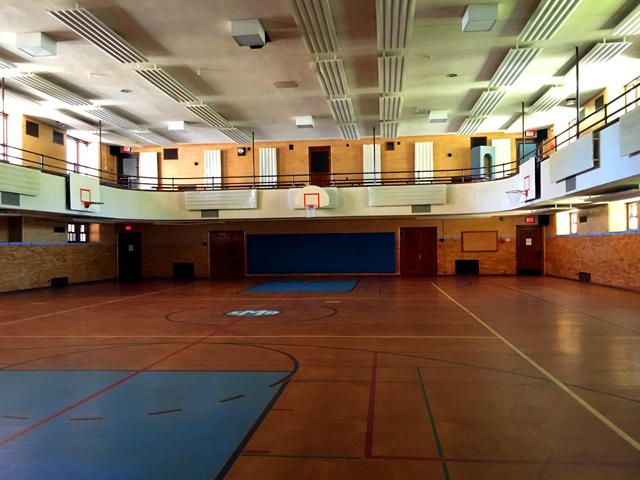