A new Stone Creek cafe is headed to Downer Avenue

Less than two months after word of a new cafe headed to Chicago, Stone Creek Coffee announced today another new location a bit closer to home, this time on Milwaukee's East Side at 2650 N. Downer Ave. in the former Associated Bank space.

Less than two months after word came out of a new cafe headed to Chicago, Stone Creek Coffee announced today another new location a bit closer to home, this time on Downer Avenue on Milwaukee's East Side.

The local coffee shop will move its new location into the former Associated Bank space at 2650 N. Downer Ave., marking the second of the previously noted three to four additional cafes Stone Creek aimed to open by 2020.

"I lived a few houses north of this site on Downer," said Stone Creek founder and co-owner Eric Resch, in a press release. "I celebrated a lot of great milestones there: my first house, getting married and our first son. For years we watched as the street changed. The old bank site is an important anchor of this street, and it has been empty for a long time. We are excited to rehab this corner and make it awesome."

The new East Side cafe – expected to open in late fall of 2017 – will feature a large three-season porch complete with open-air seating, a patio and green space, as well as a new walk-up service open to the Downer Avenue sidewalk. 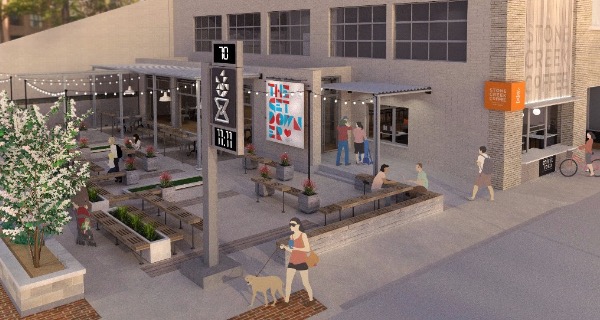 "This was a complicated deal," Resch said, in the release. "It was a tad complicated because we were committed to not only rehabbing the building, but also creating a coffee patio to replace the dilapidated corner parking lot. This is about reinventing an iconic corner in Milwaukee, and it's going to be sweet."

"Eric and I have spent many years trying to find an East Side location that fit the coffee vibes we are working to create, added Stone Creek digital experience director and co-owner Melissa Perez, in the release. "We have had our eye on this corner for over a decade, and after a year of 'behind the scenes' work, things finally came together."

Stay tuned to OnMilwaukee for more updates on the new East Side Stone Creek Coffee cafe as they become available.