When the Rolling Stones released "Their Satanic Majesties Request" in 1967, says music writer Rob Bowman, "it was maligned as a poor man's 'Sgt. Pepper,' and as a colossal failure in the group's catalogue." A deluxe reissue helps us decide if that still seems true today.

When the Rolling Stones released "Their Satanic Majesties Request" in 1967, says music writer Rob Bowman, "it was maligned as a poor man’s ‘Sgt. Pepper,’ as an example of the Stones being bored and unfocused and as a colossal failure in the group’s catalogue."

I admit, I spent a lot of years thinking at least some of this; definitely that it was a desperate attempt to catch up to the Fab Four, especially being packaged as it was in a psychedelic cover that couldn’t help but demand comparison to "Sgt. Pepper’s Lonely Hearts Club Band," released the same year.

But, as Bowman writes in the essay that accompanies a new 50th anniversary reissue of the record, the world has been growing ever kinder to this record, which not only has its charms but also feels remarkably unified, in the same sense that the incredibly varied "Sgt. Pepper" does.

Despite the critical reception – and the band's struggles that year, including drug arrests – the record shot to No. 3 in the U.K. and No. 2 in the U.S.

The reason for the reassessment, at least by this Stones fan, is the occasion of that deluxe reissue, which comes in a nearly thick as a brick 12x12 box that folds out vertically and horizontally to create a 24x24 heavyweight cardboard house for two CDs – the complete record in mono and in stereo – and two LPs (again, mono and stereo), along with Bowman’s essay in a booklet (illustrated with outtakes from the cover shoot) tucked into a slit in one panel.

I think rock and roll also caught up, in a sense, to "Their Satanic Majesties Request." With hindsight, we can see that Bill Wyman’s "In Another Land" (with The Small Faces’ Steve Marriott and Ronnie Lane on vocals) was firmly rooted in the same psychedelic impulse as The Pink Floyd’s "Piper At the Gates of Dawn," which also emerged in ‘67.

Songs like "Citadel" and "2000 Light Years From Home" turned out to be rather detailed proto-blueprints for what would become stadium-filling Britpop 30 years later.

"She’s A Rainbow" (with future Led Zeppelin bassist John Paul Jones adding a string arrangement) is simply lovely; one of the Stones’ best.

And the fact that Lennon and McCartney added their voices to the chorus on the opener, "Sing This All Together," served as a signal of unity when the music press was inclined to pit Beatles vs. Stones (also fueling the later Britpop Oasis vs. Blur media derby).

The set is a gem, with 180-gram vinyl and hybrid SACD discs and the fold-out cover that restores the original release’s 3-D lenticular cover panel.

As you’d expect, the mono version is a rediscovered revelation, with a pop and dynamism that brings the original release back to life. The disappointment for me is the lack of additional material. 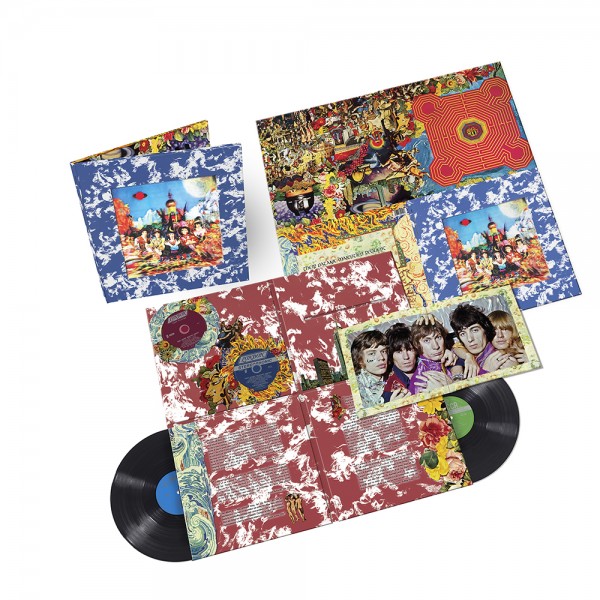 Keith Richards has written that the band "struggled haphazardly to make" the record. Charlie Watts said that "the sessions were a lot of fun because you could do anything." Mick Jagger has added that, "it was done over such a long period of time that eventually it just evolved."

Outtakes, alternate versions and the like might’ve helped us understand the struggle, enjoy the fun and follow the evolution.

But, while I lament the lack of that sort of material, I do rejoice at the chance to rediscover this neglected moment in the Stones’ long career and to, especially, rock that mono version, both in the car on the CD and at home on the warmer vinyl.

"Their Satanic Majesties Request – 50th Anniversary Special Edition" comes out Sept. 22. You can pre-order it here.