Last October, Marquette University opened a new Jesuit Residence. But one reader knew I'd be more interested in the building the priests formerly called home. So join me as we take a last look at the old Stratford Arms Hotel before it is razed in July. 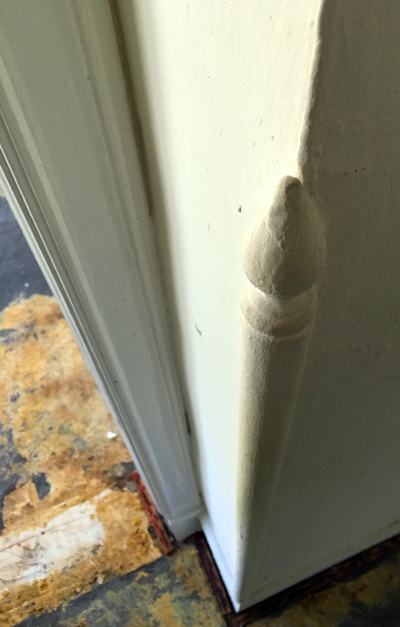 But reader Roz Rouse knew I’d be more interested in the building the 25 Jesuit priests formerly called home. And, thankfully, Marquette’s planning and facilities project manager Kurt Young Binter was willing to indulge my curiosity and swing open the cyclone fence that surrounds the four-story red brick tudor building at 1404 W. Wisconsin Ave. and take me inside.

Serving as the Jesuit residence – home to as many as 44 priests at one time – since 1973, when two campus residences were combined at the former women’s dorm, the building was originally built as the Stratford Arms hotel and apartments.

Miss Harriet Hathaway was the owner of an earlier Stratford Arms building at 179 12th St., which had a restaurant and, in 1914, at least 60 residents, a fact we gleaned from a Sentinel article from November of that year: 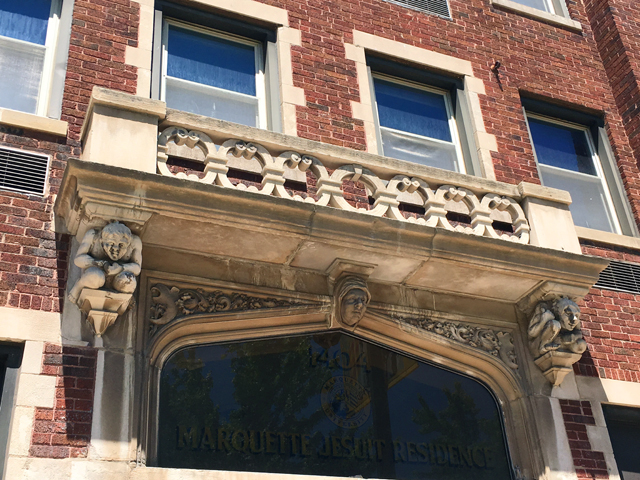 A hundred people were vaccinated by the health department after four cases of the disease were found in the South Side home of Stratford restaurant waitress Miss Ella Puffer. Puffer apparently was not afflicted but four of her siblings were sent to the Isolation Hospital on 20th and Mitchell. 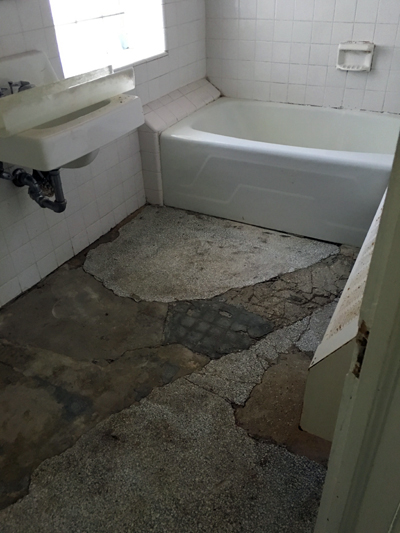 In 1916, Hathaway hired Martin Tullgren & Sons to design her a new Stratford Arms on 14th and Grand Avenue, with brick and stone cladding over a concrete and steel frame, built at a cost of $100,000 – no small figure in those days.

While today many of us remember Tullgren and his son Herbert for their more ornate works – like the George Watts building on Jefferson and Mason; their own Terra Company building on 60th and North; the Bertelson Building, 2101-2111 N. Prospect Ave. (home to Allium restaurant, among other businesses); the gorgeous duplex Exton Apartments, 1260 N. Prospect Ave.; or the First Wisconsin Garage on Mason and Water – the Tullgrens also did a lot of multi-unit residential and hotel work.

Among the ones you’ll likely have seen are the Shorecrest Hotel on Prospect and the Astor Hotel on Juneau.

So, Binter and I probably should’ve been less surprised than we were by the attribution of this relatively anonymous Tudor Revival building to the Tullgrens. After all, red and brown brick were not unfamiliar to these folks we cherish for their terra cotta facades. Look at the old Downer Garage on Webster (Starbucks and Boswell Books), for example. That’s the Tullgrens, too.

Anyway, the hotel opened and was, for a time, home to a restaurant and meeting rooms and had a few well-known residents, including Spencer Tracy, visiting Japanese poet Yone Noguchi and Al Capone’s brother Ralph (no, not kidding). 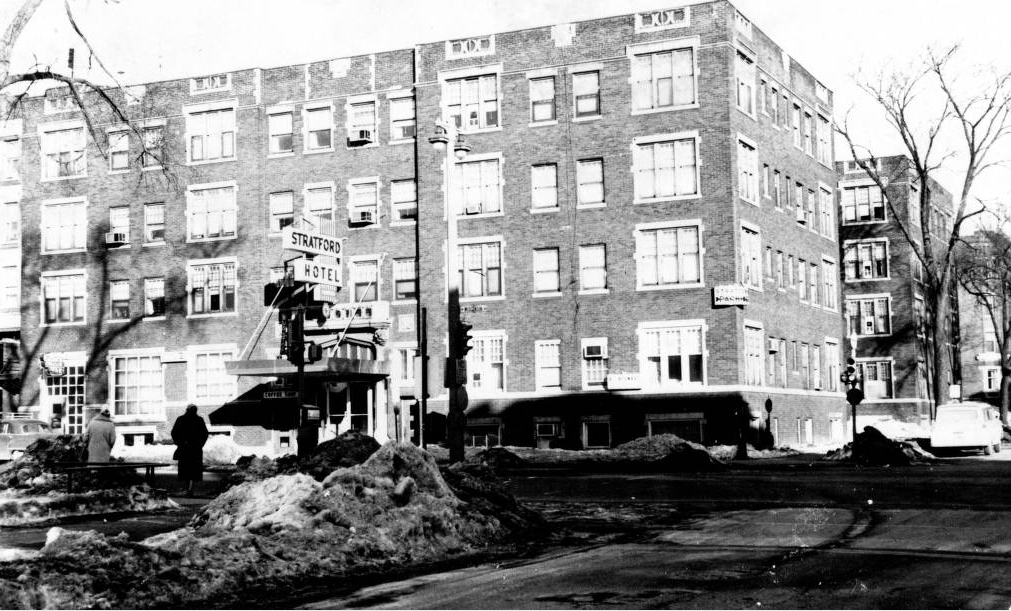 An undated image of the Stratford Hotel (PHOTO: Courtesy of Marquette University)

A name familiar to the Marquette community, Anthony Weasler – who donated the funds to build the campus auditorium that bears his name – had a life-altering experience at the Stratford Arms.

While attending the university, he worked as a bus boy in the Stratford’s restaurant, and one day he delivered a meal to the room of a hotel resident – and inventor – who, learning that Weasler was an engineering student, asked for his help doing research for a project. The experience spurred Weasler to earn a second degree.

"My life career was changed by that lucky encounter at the Stratford Arms Hotel," he later said in a speech at Marquette. 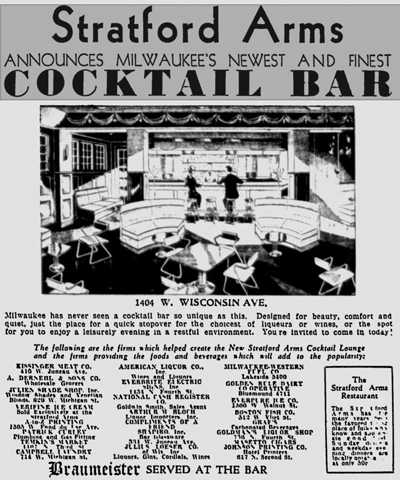 In the 1930s, the Stratford kept up with the times by cooking up what it called "Milwaukee’s newest and finest cocktail bar," with curvaceous couches, table seating, a bar, and garlands plastered (or painted, it’s hard to tell from the drawing) on the walls.

"Milwaukee has never seen a cocktail bar so unique as this," boasted a 1936 advertisement. "Designed for beauty, comfort and quiet, just the place for a quick stopover for the choicest of liqueurs or wines, or the spot for you to enjoy a leisurely evening in a restful environment."

By 1942, in addition to the rooms upstairs, the Stratford was home to the Central Tavern and the Varsity Beauty Shop, though it’s unclear today where those were located in the building. By the late ‘50s, the Central was renamed the Stratford Hotel Bar, but not long after – in 1962 – the hotel and bar were closed and the building was sold to Marquette. 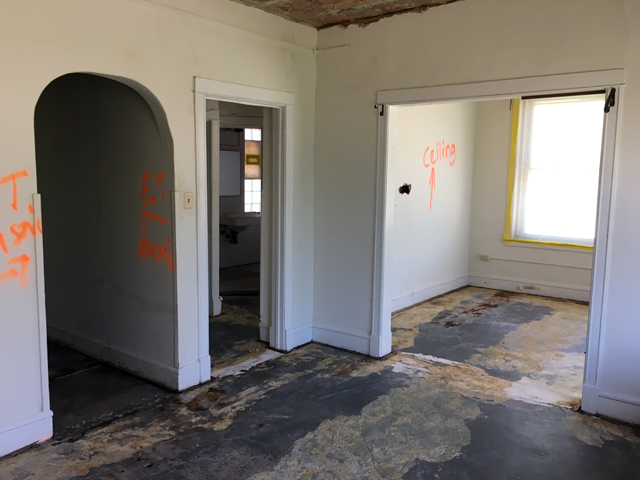 One of the suites on the second floor.

Because it was basically already a dorm, it was quickly converted to a residence hall for women and named Heraty Hall in honor of 1914 grad Dr. John A. Heraty. Renovations were later made and in 1973 Marquette merged its two Jesuit residences into one at the site.

It appears there were two main entrances to the Stratford. The one between the two east wings of the H-shaped building, on 14th Street, appears to be where the lobby desk was located and just beyond it, the restaurant and bar. There’s another entry on Wisconsin Avenue that has ornate stonework, including a couple grotesques, around the entrance, which leads to a wide marble staircase flanked by elegant wood-paneled walls. 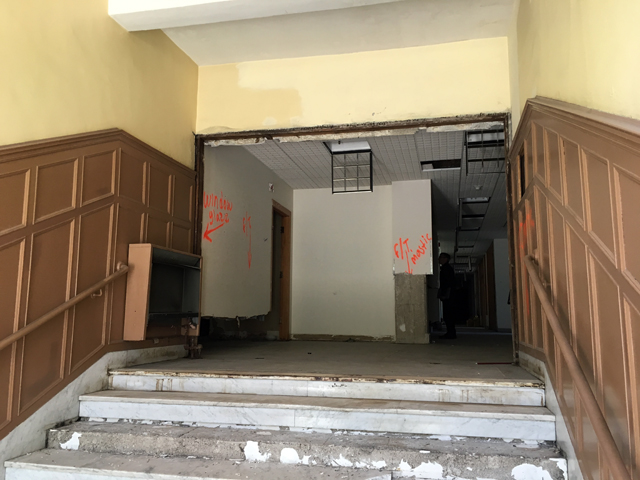 The marble staircase in the Wisconsin Avenue entry.

The basement has a couple entrances off Wisconsin Avenue, too, including one that looks like it could’ve been for public use. The other is more clearly a service entrance. Down here there’s also a spiral staircase, dating to the Jesuit era, that rises two stories through the library. But if you were in that room, you’d have to open a closet door to find the "secret" steps.

Upstairs, the second, third and fourth floors have identical floor plans filled with rooms. There are studios, a few larger units and even a few suites. Some apartments facing north have three-window bays. 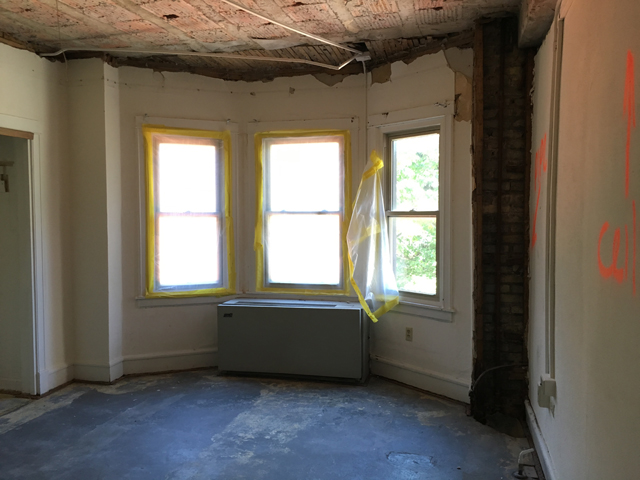 Some of the apartments on the north side of the building have window bays.

It appears that some of the rooms have been altered in size and shape over the years, as we found evidence of walls moved, though no proof of when those changes were made. Suffice it to say, based on moldings and other details, it didn’t appear that the work was done anytime recently. 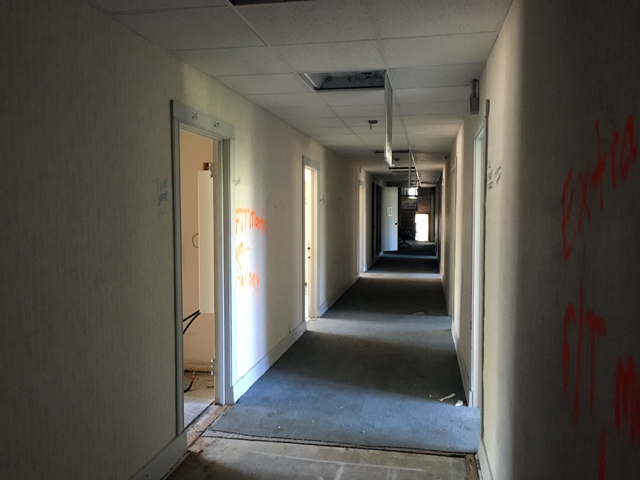 The corridor on the second floor.

During the Jesuit era, each residential floor also had a couple small chapels.

The building is slated to be dismantled in July, and a wide variety of salvage work has already taken place with much material already on sale at local Re-Store outlets. That means, though, that some of what was there was gone before I arrived. 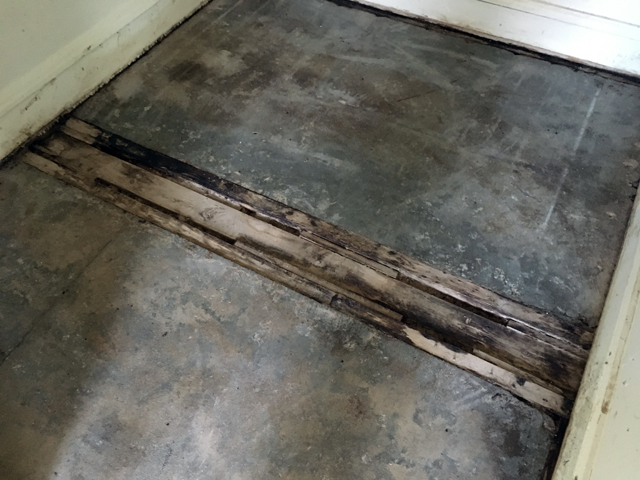 Evidence that a wall was moved at some point, changing room dimensions.

What I did see were those gorgeous marble staircases, which couldn’t be salvaged. The marble tended to break apart when workers attempted to remove it. The main staircase to the upper floors has a really nice iron railing and wood banister. Some of the bathrooms and the former restaurant space still have parts of their terrazzo floors with marble accent tiles. 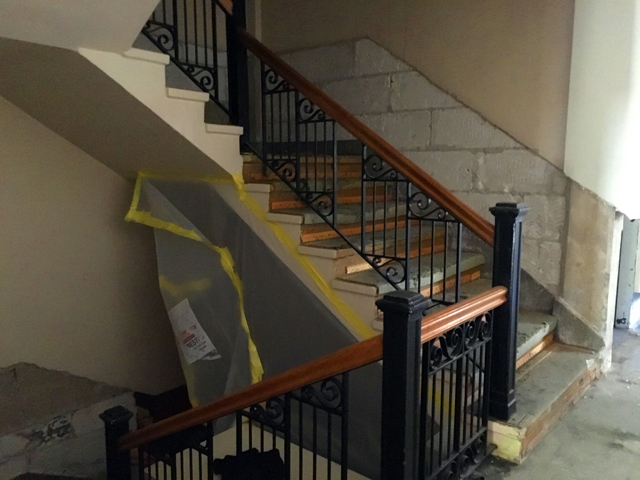 The main staircase has a nice iron railing and wood banister.

In the rooms, some of the molding and corner guards appeared original, or at least quite old.

One of the most poignant, though least old, things I saw (and photographed) was the menu from the building’s "last supper" in October on the wall of the dining room. 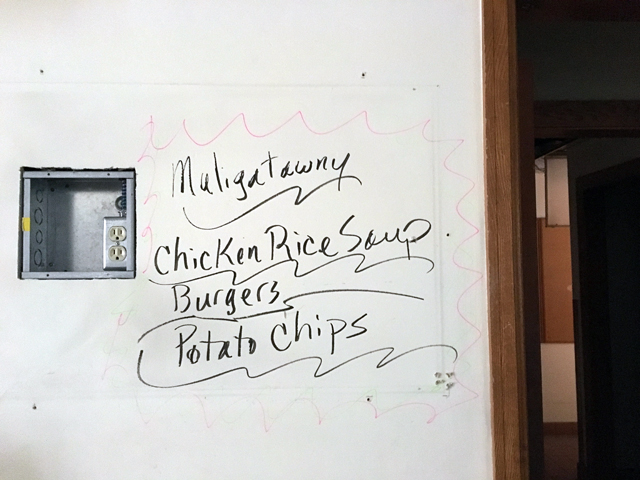 Evidence of the last supper at the old Jesuit Residence in October 2015.

For now, Binter tells me, the land will be cleared and greened as work continues on Marquette’s master plan for the campus, which includes razing and replacing McCormick Hall nearby, adding onto Schroeder Hall and altering the student union, which sits adjacent to the Stratford Arms building. It looks like the ultimate goal is for the land at 14th and Wisconsin to become part of the union’s orbit.

It may be a shame to lose the Stratford but not so much for its architecture, which, frankly, isn’t all that breathtaking. More so because it’s one of the last residential hotels on this stretch of Wisconsin Avenue, which used to have many (RIP Biltmore).

Fortunately, it is by no means the last. At least three other Marquette dorms are former hotels (four if you count the old YMCA) and two of those date from roughly the same era: the LaSalle (now Cobeen) and Catholic Knights Hotel (Carpenter Tower).