As part of a plan to extend The Hop streetcar up to the Wisconsin Center convention facility on Wisconsin Avenue (and then further north), Mayor Tom Barrett today officially announced a plan to build a streetcar plaza on the corner of North Vel R. Phillips and West Wisconsin Avenues.

As part of a plan to extend The Hop streetcar up to the Wisconsin Center convention facility on Wisconsin Avenue (and then further north), Mayor Tom Barrett today officially announced a plan to build a streetcar plaza on the corner of North Vel R. Phillips and West Wisconsin Avenues.

Barrett said the roughly one-acre space – named in honor of the late Vel R. Phillips, and designed by TKWA UrbanLab and Madison-based Saiki Design landscape architects – just across Wisconsin Avenue from the convention center – would contain, in addition to a streetcar station, a 3,000-square foot retail space that he suggested could be a cafe or beer garden; an information kiosk; flexible space for things like farmers markets and food trucks; and potential space for public art.

It would also have a Milwaukee County Bus Rapid Transit (BRT) station to allow passengers to connect between The Hop and BRT.

The city hopes to have the plaza and streetcar extension to the Wisconsin Center completed in time for the Democratic National Convention in July 2020.

"The vision for this incredible public space is a reflection of the renewed energy and growth we’re seeing throughout the city," said Barrett.

"The Westown neighborhood in particular, with the recent roll out of Fiserv Forum and the Deer District and upcoming Democratic National Convention, is poised to be a center for development, activity and investment for years to come. We envision this plaza as a fitting tribute to the great Vel R. Phillips as a dynamic and active gathering place that will bring our community together and make for a more connected urban environment."

As you can see from the map below, the current $5 million, TIF-funded plan would run The Hop up Vel R. Phillips Avenue from Clybourn Street to the plaza, where it would pass through and return back south toward the Streetcar Operations and Maintenance Facility on North 5th Street. 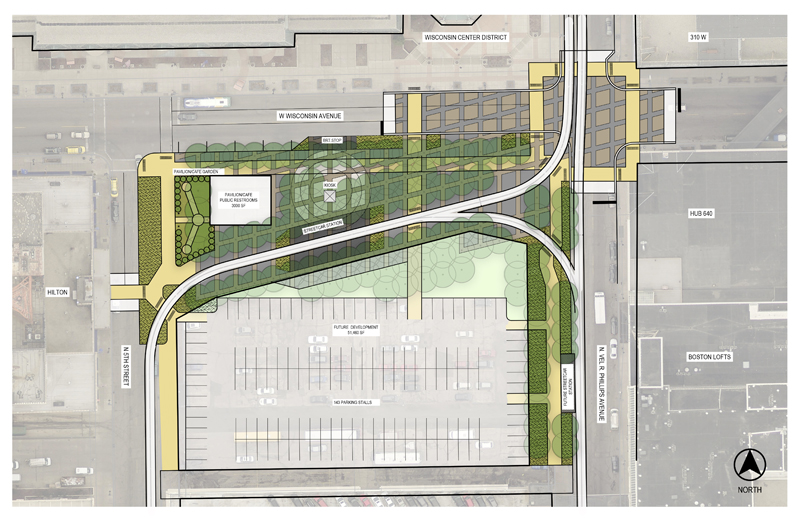 The Hop's tracks currently terminate two and a half blocks south on Phillips Avenue, where they enter the streetcar facility.

The long-moribund Wisconsin Avenue site has been sitting vacant, used as a surface parking lot, since the demolition of the Randolph Hotel in 1985.

"Surface parking is the ultimate under-utilization of valuable land," said Ald. Robert Bauman, in whose district the land is located. "This is not a good visual for people visiting out city. Not a good picture."

As you can see from this 2016 post and related rendering, the streetcar plaza is anything but a new idea, though back then it was part of a larger theoretical development.

An old rendering of the streetcar plaza idea.

Now that there is actually a streetcar – The Hop was not yet a reality when this rendering was released three years ago – the idea has come to the fore once again, at the moment without the adjacent development.

Proposals for hotels on the site did not move forward, as developers awaited expansion of the convention center.

According to a press release, "the proposal preserves over 50,000 square feet of space on the site for future development." 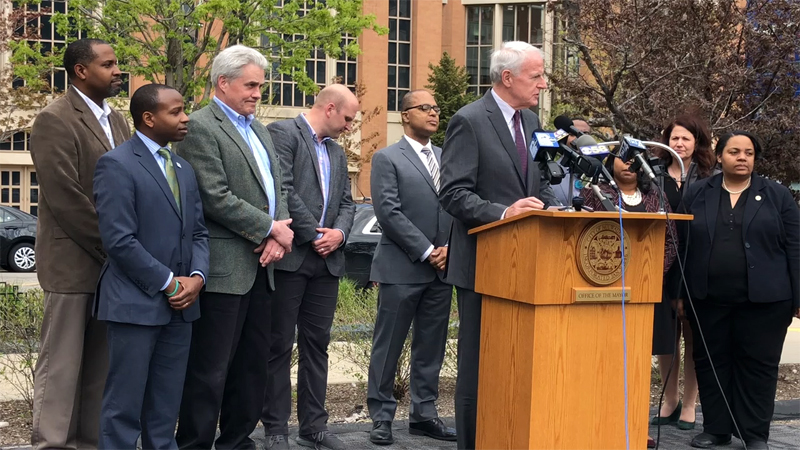 "This plaza is another exciting announcement among a growing list of catalytic developments for Westown," said Westown Executive Director Stacie Callies, in a statement.

"The design has the potential to change the face of Westown and create a new and unique gathering space with multimodal connections."

The goal is to have the streetcar extension, and presumably the plaza, ready to go in time for 2020 Democratic National Convention.