Anyone who's visited the South Shore Farmers' Market has most likely heard John Miller cranking out sweet sounds from his barrel organ - sometimes called a street organ. This past Sunday was Miller's last local performance for awhile. He leaves Thursday for a 3 1/2-year pipe organ builder's apprenticeship in Kürten, Germany.

"It's basically a pipe organ that plays itself," says Miller. "It’s similar to a music box."

This past Sunday was Miller’s last local performance for awhile. He leaves Thursday for a 3 1/2-year pipe organ builder's apprenticeship in Kürten, Germany.

The apprenticeship is a dream-come-true for Miller, who always wanted to be a pipe organ builder, but didn’t know how.

"When I got a Facebook account early in high school, the first person who I didn't actually know in person whose friend request I accepted was my soon-to-be boss in Germany," says Miller. "He always posted really cool pictures of organ building related stuff. One day I saw on his blog that he had a position open for an apprenticeship. I applied, but initially was not chosen. Another year went by, and I got the good news that I was chosen."

After the 3 1/2 years as an apprentice, Miller will take an exam and become a journeyman.

"After a few years of work – someplace in the world – as a journeyman, I will return to Germany to take my master craftsman exam. I then will be a certified master craftsman of pipe organs," he says.

After completing the master craftsman exam, Miller plans to return to Milwaukee to open a pipe organ workshop.

"I want to continue the great and long history of pipe organ building here," he says. "It will be an honor to be listed with Milwaukee's greatest organ builders such as William Schuelke, George Weickhardt, Jerome Meyer, Charles Besch, Stanton Peters and John Nolte."

Miller plays the church / concert pipe organ which took him 10 years to learn. As for his barrel organ, Miller says playing this type of organ doesn’t require skill, but it does require practice in order to turn the crank at a consistent speed.

The barrel organ that Miller plays at the farmer’s market was built in 1950 by the Bacigalupo barrel organ company in Berlin, Germany. 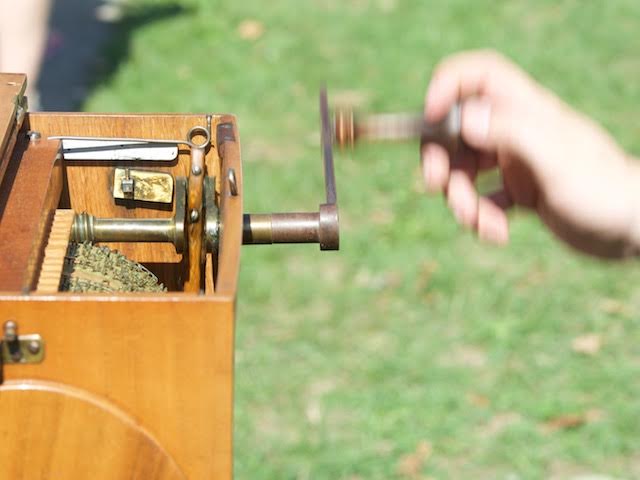 "Bacigalupo organs are the best sounding and best quality barrel organs ever built, and this is a fairly rare example being built just after Berlin was practically destroyed in World War II," says Miller.

Miller, who was born and raised on Milwaukee’s South Side, got the organ from a man in California who was an organ grinder at Knott’s Berry Farm.

"After seeing the organ grinders in New York City, he ordered this organ from the Molinari company in Brooklyn, NY and also bought two real monkeys which he trained himself," he says.

This year is Miller’s fourth year in a row playing at the market. He was only 17 years old when he started.

"It took a lot of experimentation my first year of organ grinding to find the most fitting and successful place to play," says Miller. "I’d always ask permission to play and then usually leave if there was any trouble."

He says he had to "put up a fight" to come back to the South Shore Farmer's Market his second year because, after seeing him perform, other young folks were inspired and flooded the park with performance.

"So many of them came that the whole path in front of the pavilion was lined with street musicians. The market manager decided to put a stop to it since the focus of the market was quickly becoming something other than the food," says Miller.

However, so many market-goers told the manager that they appreciated the organ music and thought that it made the market unique, so an exception to the "no busking" rule was made for Miller.

"I've now become friends with both market managers and volunteer with set up every week before the market starts," says Miller, who also plays at nursing homes, beer gardens, church events and private parties.

Although Miller is excited about moving to Europe, he is going to miss a lot of people and places in Milwaukee, including his church, St. Andrew Lutheran, where he served as an organist. Miller says he will also miss winding the historic 1880 tower clock at St. Stephen Lutheran in Walker's Point every week which he and a friend restored last year.

"However, I'm probably going to miss Lake Michigan the most. I often walk by the lake with my mom or my friend – who’s been a friend since kindergarten," says Miller. "I’ll also miss fishing on McKinley pier and watching the big barges coming in under the Hoan Bridge or the Dennis Sullivan sailing by Discovery World."

The South Shore Farmer’s Market takes place every Saturday morning from 8 a.m. to noon through Oct. 11 at South Shore Park.