Though the newly buffed Streets of Old Milwaukee won't open to the public until Dec. 11 - work is currently on schedule, according to museum staff - I got a peek inside this week, along with MPM's Director of Exhibits Julian Jackson.

The entrances are blocked off, the lights are cranked all the way up. Masons are applying cream city brick veneer to a building facade and carpenters are building a new Northside Lumber building.

An artist is painting over a carefully sketched mural of 1900-era Milwaukee while another exhibit pro paints some porch supports.

I’m sworn to secrecy about some other stuff taking shape inside the Milwaukee Public Museum’s Streets of Old Milwaukee exhibit, which turns 50 this year and is getting a makeover.

Though the newly buffed Streets won’t open to the public until Dec. 11 – work is currently on schedule, according to museum staff – I got a peek inside this week, along with MPM’s Director of Exhibits Julian Jackson. 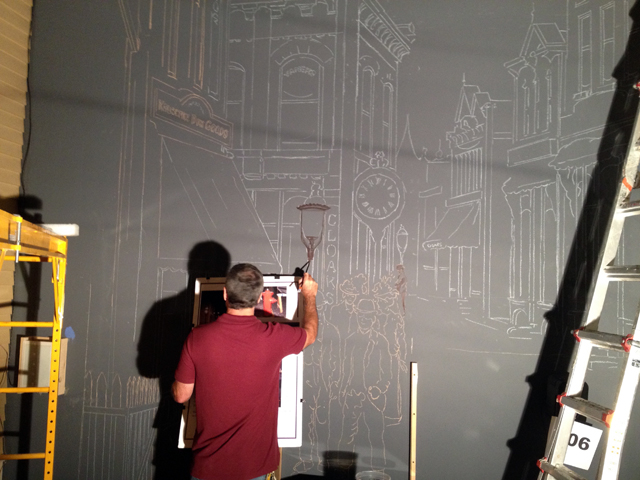 "Museum exhibits don't usually survive for 50 years," Jackson says as we enter through what will be the new main entry point for The Streets of Old Milwaukee. "It’s a testament to the original designers of the Streets that it has been a great exhibit for Milwaukee Public Museum for a very, very long time.

"We don't want to undermine any of the great things about it, but rather build on top of that. The key thing is that all your old favorites are still here."

The old Allen-Bradley display behind glass is gone, cleared out to make way for a streetcar that will clang it’s way backward through time, dropping you off in a new section of the Streets, one which allows the exhibition to focus on some themes that were previously absent in this evocative recreation of Cream City, circa 1900.

"We did go through the history of Milwaukee at that time and we were looking at all sorts of different kinds of stories we could tell," says Jackson. "When The Streets of Old Milwaukee was first made, it had a very retail orientation to it. There were couple of the stories that seemed to be missing from the streets at that point. One was about Milwaukee’s industrial past, and we've incorporated more of that history."

Just inside the space there will be a streetcar shed, a Falk industrial building and a recreation of North Side Lumber & Fuel Company (now Bliffert) in Riverwest using century-old boards removed from the original building on Chambers Street, which is slated for demolition. Next to it, there will be a newstand. 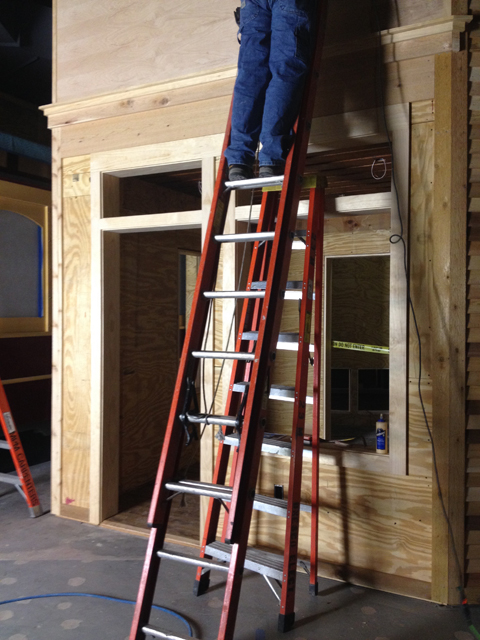 "The other was just sort of a broader sense of storytelling," adds Jackson.

"We've used a couple techniques to broaden the number of stories we're telling. This is all based on historically accurate fictional figures.

"In other words, we haven't taken a specific vaudevillian, but we've done a composite. A vaudevillian who might have been there who can give the sense of what it might be like to work the theater circuit in Milwaukee."

While the familiar Streets features remain intact, there will be changes, most of them subtle: Granny will have a new dress; the police sentry box will get a makeover, as will the photography studio; a hoarding covered with advertising posters will be replaced with a park mural; the movie theater has gotten an interior makeover; and a couple popular features will have new aspects that you’ll have to discover for yourself (hint, don't just walk right past the old water pump next time you visit).

And there will be some use of technology. No touch screens, of course, nothing that obvious, but lighting, the use of moving shadows in upper windows, sounds and scents will lightly enhance the experience.

But don’t worry, while the smell of horse manure would surely have dominated the cityscape here a century ago, the museum staff put the kibosh on that.

"Believe it or not, we considered the manure thing," Jackson replies with a laugh when I ask. "We do have smells in there, but we chose slightly more enjoyable smells. The bakery has the smell of fresh cooked bread coming out of it. Fresh cut wood. Things like that.

"Subtly integrated throughout the space."

Also, for the first time ever, The Streets of Old Milwaukee will be quietly updated every six months. For example, the headlines on the newspapers at the newstand will change and the films in the cinema will rotate.

"There will be slight changes in what you see, what you hear, what you can interact with. When we were working with our historian, we came up with all sorts of different kinds of themes that were relevant for the streets. We chose four primary themes that we wanted to tell more stories about: entertainment, public safety, public health, immigration.

"All of those things were issues of the day that you see in the newspapers, that you see in lives of the people in the streets. Each one of those, we've created stories that are interwoven through the streets now. The changes focus on those different themes. It'll be something you can keep coming back again and again to visit and see some new stuff."

Of course, all of this costs money and you can help keep the Streets viable for the next 50 years but offering your support through the museum's "Complete the Streets" fundraising campaign, which runs through Oct. 6. Details are here.