How many times have you held a dinosaur in your hands, watched it wriggle between your fingers and then set it free to build its population in your hometown? This Saturday, Sept. 28, Sturgeon Fest at Lakeshore State Park offers just that opportunity.

How many times have you held a dinosaur in your hands, watched it wriggle between your fingers and then set it free to build its population in your hometown? This Saturday, Sept. 28, Sturgeon Fest at Lakeshore State Park offers just that opportunity from 11 a.m. to 3 p.m.

"Sturgeon Fest is a time when people of all ages can actively participate in a species restoration project," said Riveredge Nature Center Executive Director Jessica Jens.

"So much of ecological restoration and science takes place out of view of the public. At Sturgeon Fest, anyone can show up and actively participate in restoring this vulnerable species in its rightful home. Plus, there's just something incredibly wonderful about watching the young sturgeon swim out of your open hand. It makes everyone feel like they are doing something positive for our world."

Sturgeon Fest is free for anyone to attend and features family-friendly games, crafts, a rock wall to climb, kayaks to paddle in the lagoon, food trucks and more. For $10 – all proceeds of which benefit the Return the Sturgeon program – anyone can hand-release a Lake Sturgeon into the Lakeshore State Park lagoon that connects to Lake Michigan. Riveredge encourages people to reserve to release in advance at SturgeonFest.org, as once the 1,000 fish are spoken for, release opportunities are exhausted until next year. 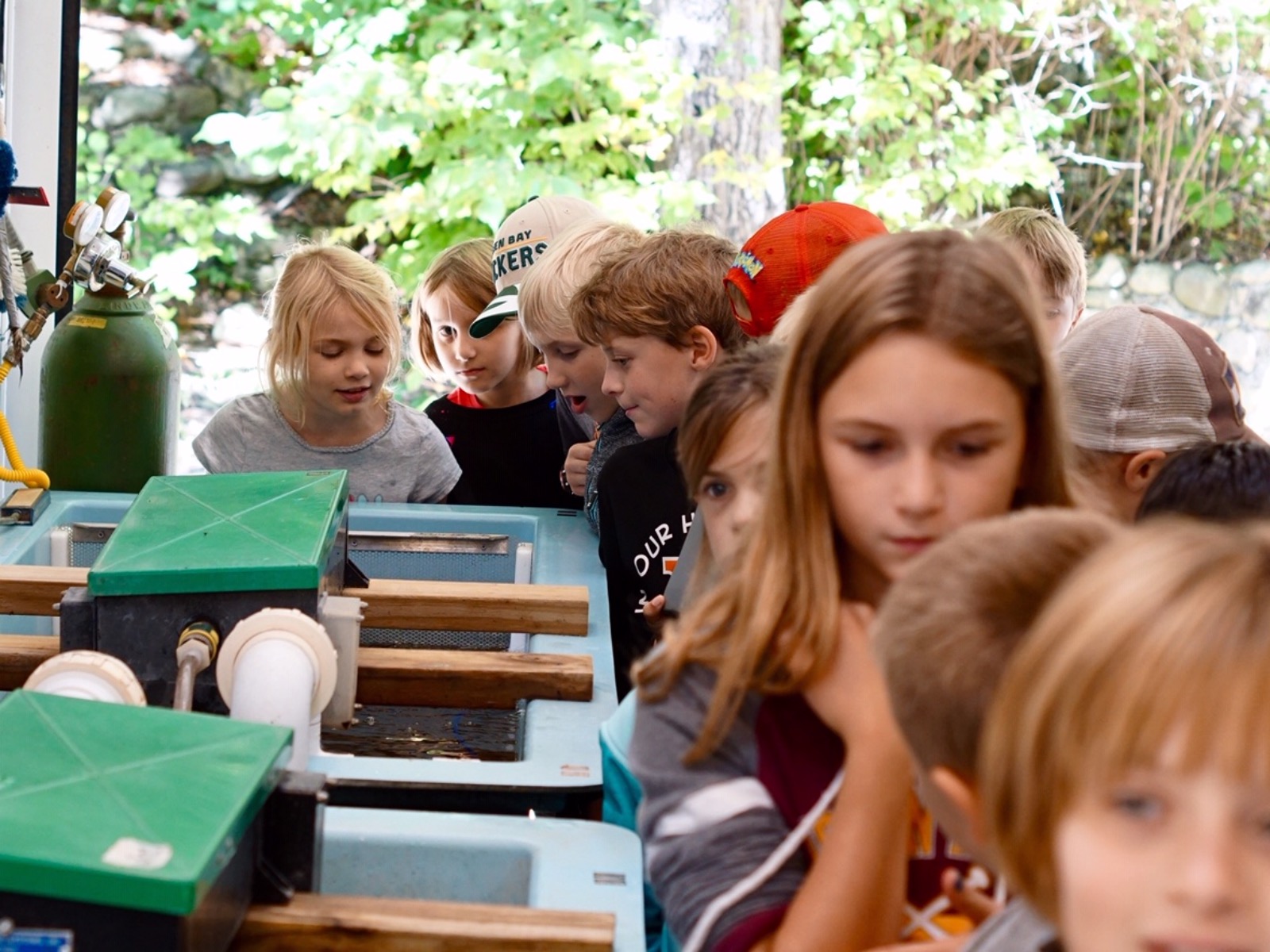 Students of The Riveredge School see hundreds of sturgeon in tanks at the
Riveredge streamside rearing facility.

The Return the Sturgeon project is a region-wide collaboration in which the Wisconsin Department of Natural Resources, nature centers and Native tribes work together to see this fish once again flourish with a stable breeding population. Worldwide, various species of sturgeon are on the brink of either extinction or extirpation (a localized extinction). 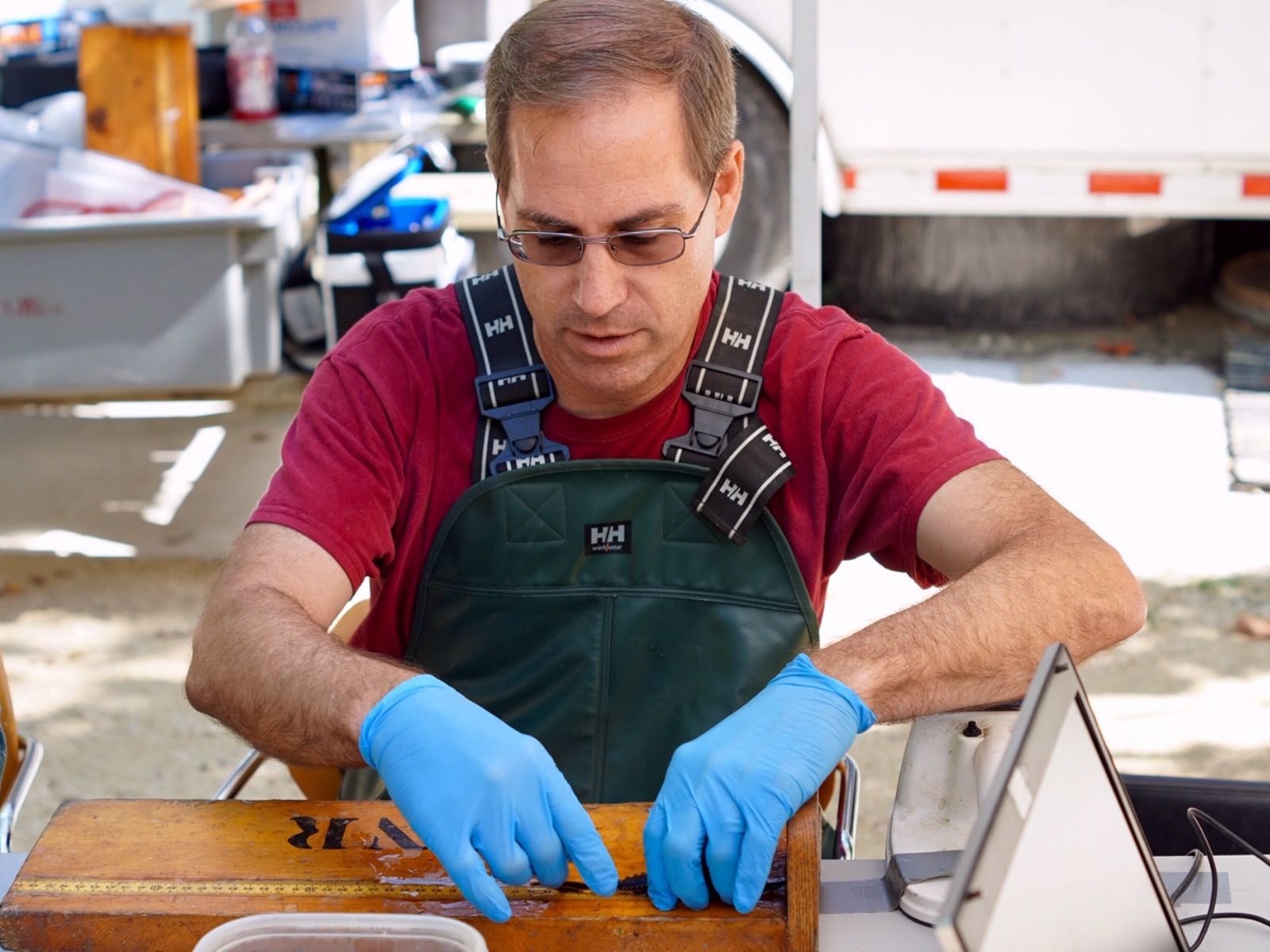 Brad Eggold of the Wisconsin DNR measures a sturgeon prior to release this Saturday.

Lake Sturgeon can grow to be up to seven feet long, and some can live to be more than 100 years old. The species is native to the Great Lakes, but a combination of factors have taken the fish to the brink of extinction. In the 1800s, Lake Sturgeon were considered a nuisance as they were large enough to tear fishing nets. Fisherman would toss the large fish on the shore to die. Later in the same century, however, fisherman began harvesting the fish’s eggs as caviar for sale on the international market, effectively decimating its future breeding population. 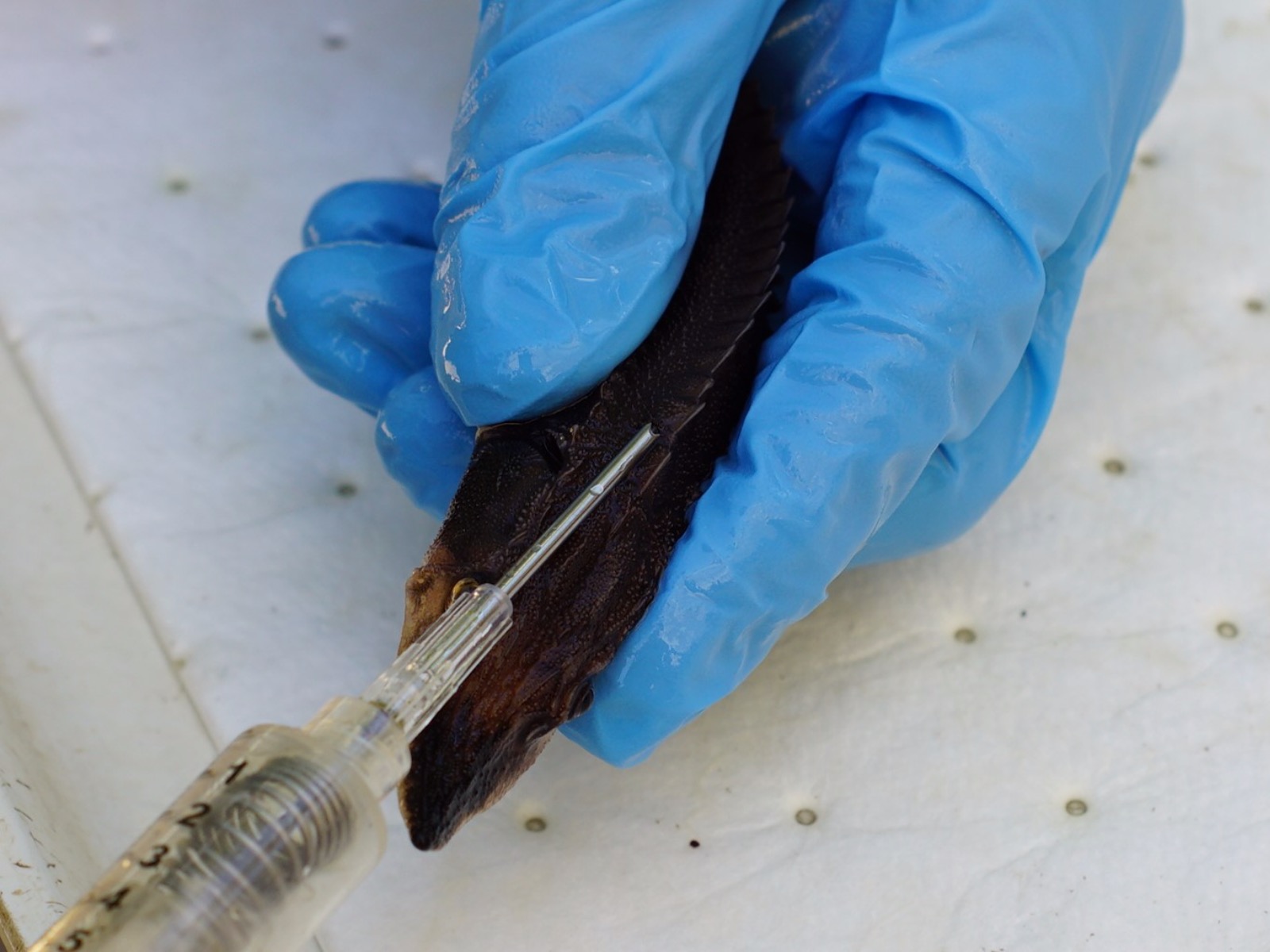 Each Lake Sturgeon has a fin clipped and a tracking tag inserted to track the fish’s health
and location if it is ever caught.

Sturgeon don’t reproduce until they’re between 15 and 25 years old, which is why the Return the Sturgeon program is a 25-year reintroduction program. People refer them as "living dinosaurs" because the species is incredibly old, having been swimming around lakes and rivers for about 150 million years. The species features such ancient attributes as armored plates along its skin and a backbone made of cartilage. Sturgeon feed on the bottom of lakes and rivers, extending their mouths downward away from their bodies to vacuum food from the bottom. 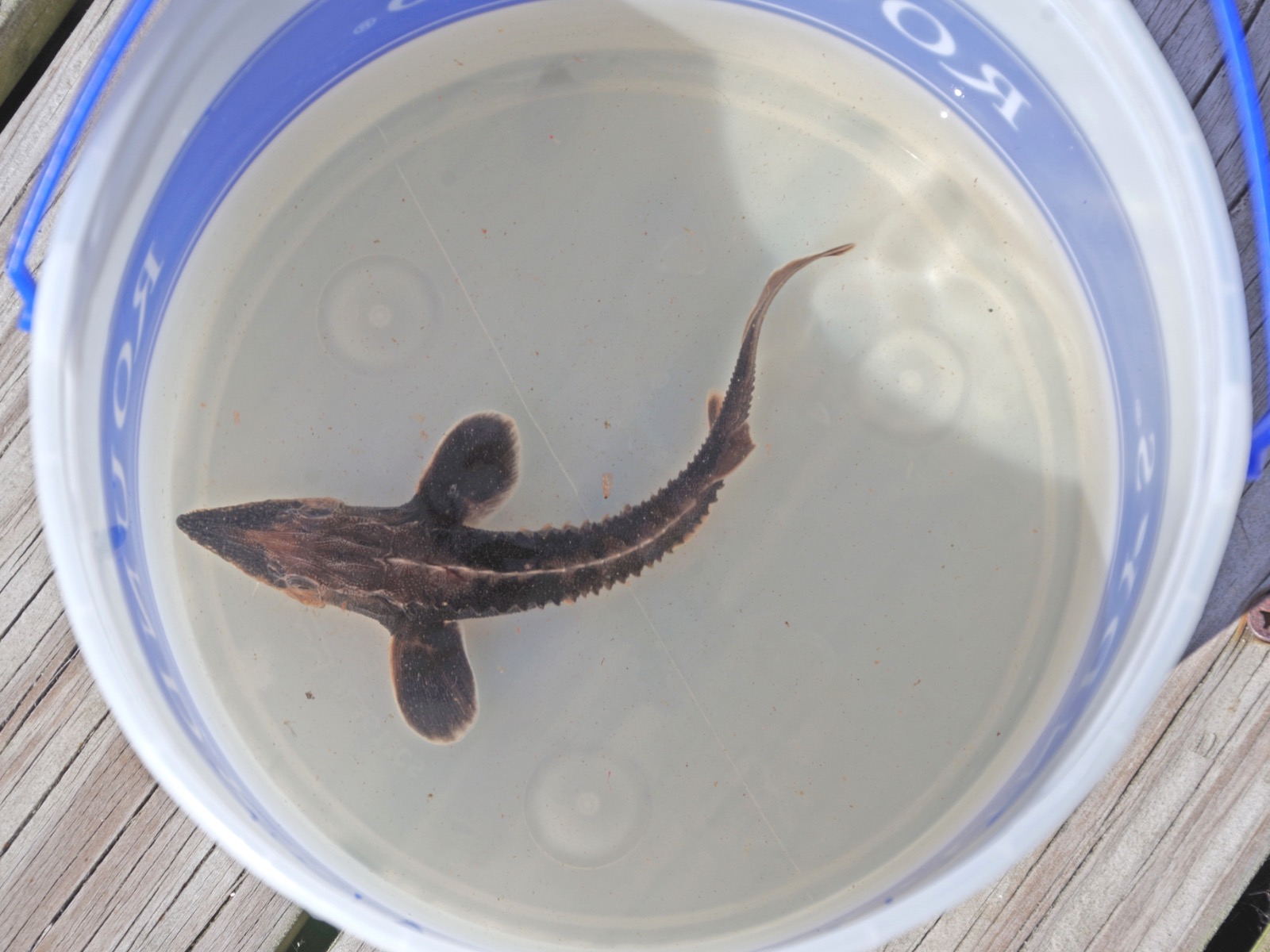 A Sturgeon soon to be released into Lake Michigan.

The removal of dams in the Milwaukee River has improved the likelihood that the fish will reach suitable habitat upstream in which to spawn. "Lake Sturgeon and other species return to spawn in the water in which they were raised," said Mary Holleback, the onsite project coordinator since 2006. To help return this ancient fish to its ancestral waters, Riveredge Nature Center teamed up with the Wisconsin DNR to reintroduce the sturgeon by raising fingerlings in a streamside rearing facility located at the nature center.

"This facility enables the sturgeon to imprint on Milwaukee River water as they grow so they will remember and return to it to spawn when they are adults. Once the fish are released, they will have a better chance to return to the river to spawn than if they were hatchery-raised," said Holleback. 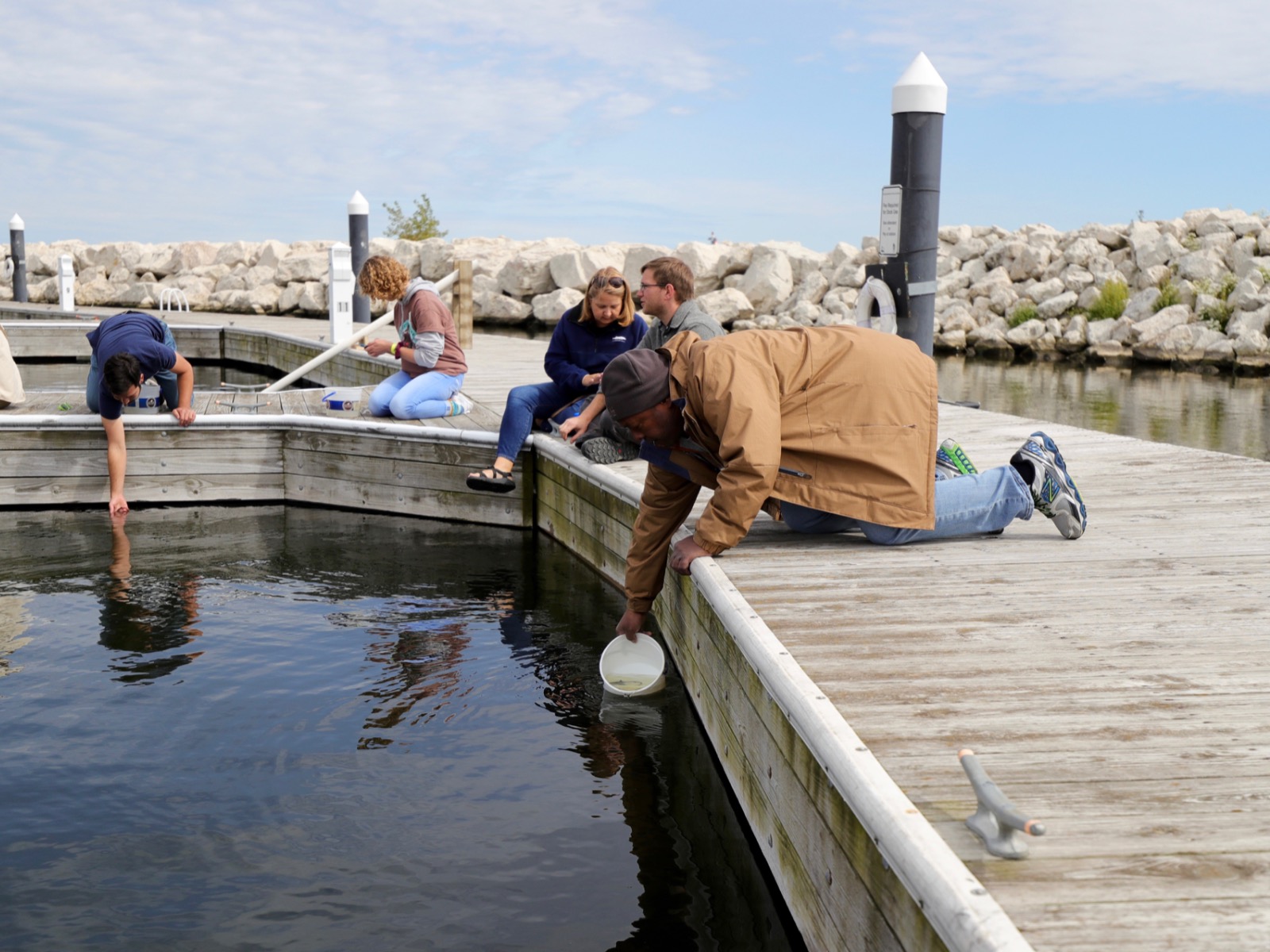 Releasing a fish at Sturgeon Fest.

"The earliest information we have about a dam being located at North Avenue is from 1850, so since then, and until 1997 when the dam was removed, this species hasn’t been able to return up the Milwaukee River to spawn," said Brad Eggold, Wisconsin DNR Great Lakes District Fisheries Supervisor for Lakes Michigan and Superior.

The sturgeon that will be released Saturday have been raised from eggs that were harvested in March, where sturgeon spawn below the Shawano Dam in the Wolf River.

"We’re able to fertilize the eggs (in Shawano) and bring them right to the trailer (at Riveredge Nature Center) that same day," said Eggold. The fish are raised with the help of a dozen dedicated volunteers and with oversight and collaboration with the Wisconsin DNR. 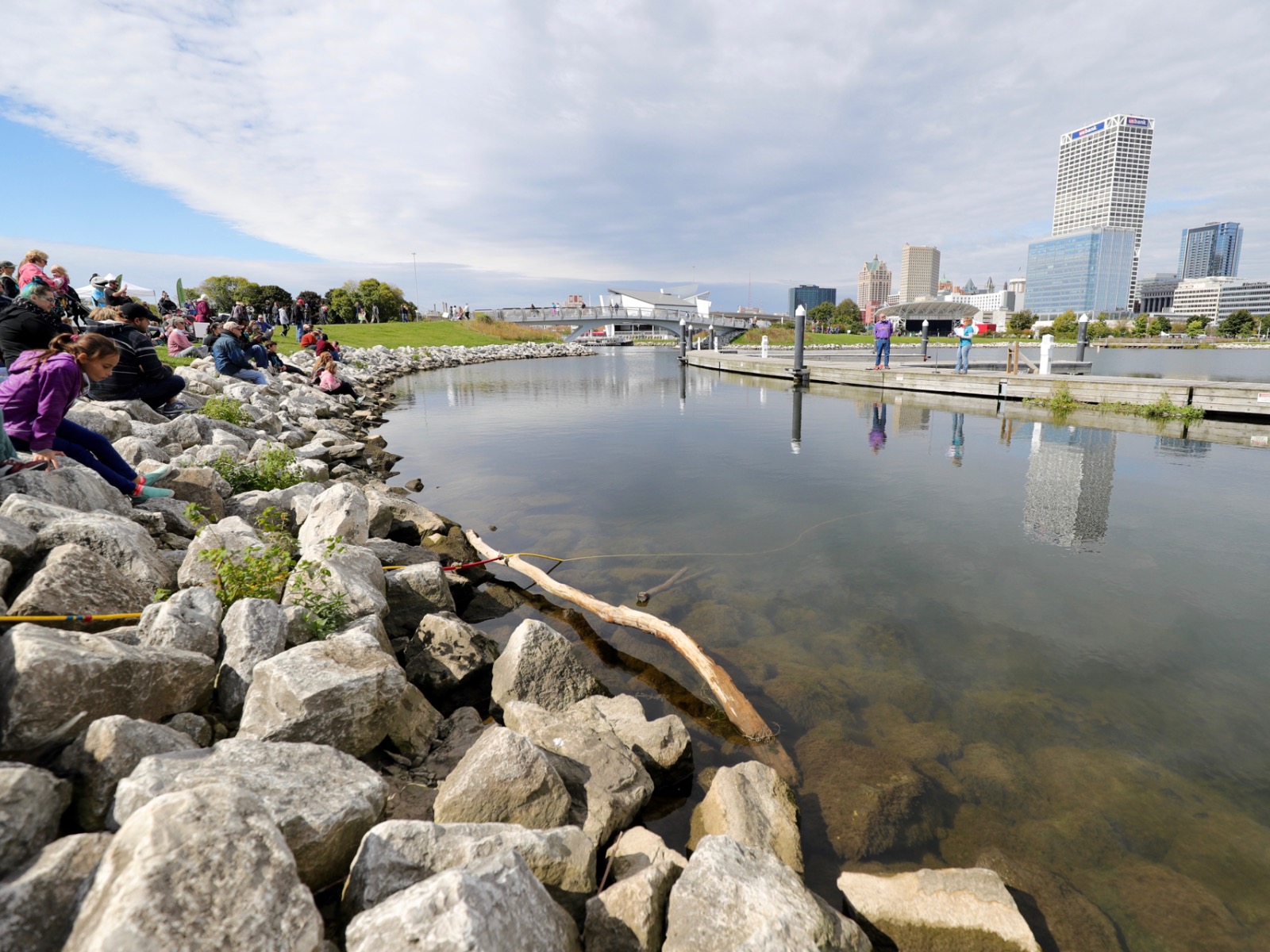