Last week, I got a message from Paul Walter, a co-facilitator at the Slinger Authors' Camp, a youth program that's part of the Fox Valley Writing Project (which is, in turn, affiliated with the National Writing Project). The 17 kids in the program are suburban spelunking in their town.

There are perks to this job, but few more rewarding than some of the emails I receive from readers. While kind words from friends are always appreciated and treasured, hearing from folks I don't know reminds me of the reach that some stories have.

Last week, I got a message from Paul Walter, a 7th grade teacher and co-facilitator at the Slinger Future Authors' Camp, a youth program at Slinger High School that's part of UW-Oshkosh's Fox Valley Writing Project (which is, in turn, affiliated with the National Writing Project).

"While gearing up for this year's camp," he wrote, "I was impressed by the Urban Spelunking stories featured on OnMilwaukee.com and discussed on 88.9.  (Co-facilitator) Robyn (Bindrich) and I spoke to our friend and high school sociology teaching cohort, Nate Grimm, about potentially incorporating the Urban Spelunking idea into our camp. Since Slinger isn't exactly an urban setting, Robyn and I decided on the term Suburban Spelunking, and Nate was kind enough to connect us to some of the community contacts he's made through his Slinger Community Nights. "

"We started with Ken and Sue Blaine showing us around their salvage yard, which was the site of the old Storck Brewery (pictured below)," Walter wrote. "They explained how Storck made it through Prohibition by selling ice cream, while still secretly keeping the beer flowing and shared with us other aspects of the historic operation.  They then transitioned to Ken's racing career at the nearby Slinger Speedway, 'The World's Fastest Quarter Mile Oval,' and their current salvage operation. We even got a 'safety' demonstration regarding auto glass as wide-eyed campers took turns throwing rocks through the front and rear windshields of a Chevy Impala. 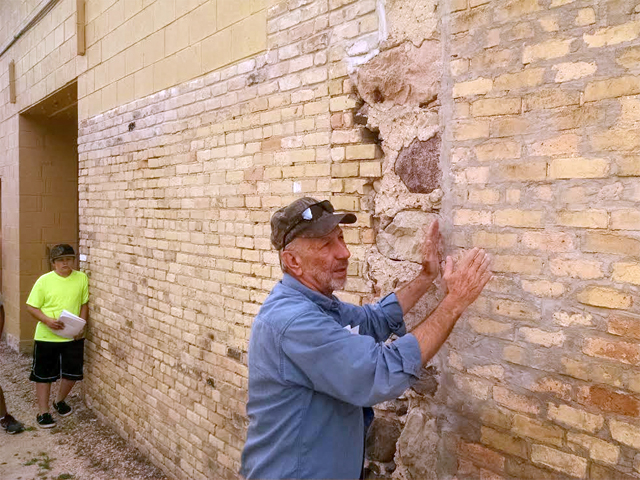 "From Blaine's Auto and Truck Parts, we moved onto 80-plus-year-old Joe Merten's garage.  Joe gave us a quick rundown of the garage his dad built after tearing down a run-down chicken coop and preceded to share stories of working on Model Ts with his dad.  We listened to Joe and took notes around his army-surplus pot-bellied stove, where he still has 15 or so friends and former customers gather every Monday to eat peanuts, drink soda and 'solve the world's problems.'

"Our final stop was the Slinger House, a bar, hotel and ballroom dating back to the mid-1800s. Current owner Kelly Henrickson showed us some of their more recent renovations in progress, but also revealed the underground stable, the field stone carriage house, and the original pressed tin ceiling still looming over the modern bar."

This week, kids were turning their notes into work: be it journalism, poetry, essay or memoir

When Walter asked if I'd be curious to see the finished work, I suggested that he pick his favorite for each of the stops and we'll run them here at OnMilwaukee.com.

So, stay tuned for those.

In the meantime, thank you Paul and Robyn and the kids of the Slinger Authors' Camp for the inspiration.