By the time we'd heard that hip-hop pioneer DJ Kool Herc will come to Milwaukee in August, we were already anticipating the Summerfest appearance of Sugarhill Gang, which had hip-hop's first real hit with 1979's "Rapper's Delight" and Melle Mel & Scorpio of the Furious Five. The two events bookend a summer of shows here by hip-hop groundbreakers.

By the time we'd heard earlier this week that hip-hop pioneer DJ Kool Herc will come to Milwaukee later this summer, we were already anticipating the Summerfest appearance of the Sugarhill Gang – which had hip-hop's first real international hit with 1979's "Rapper's Delight" – along with Grandmaster Melle Mel and Scorpio of the Furious Five.

The two events bookend a summer of shows here by important hip-hop groundbreakers. (Ghostface Killah is coming, too, during Hip-Hop Week MKE.)

The classic hip-hop party on the brand spankin' new U.S. Cellular Connection Stage Thursday night was non-stop, and it was the perfect launch of a summer of classic hip-hop in Brew City. 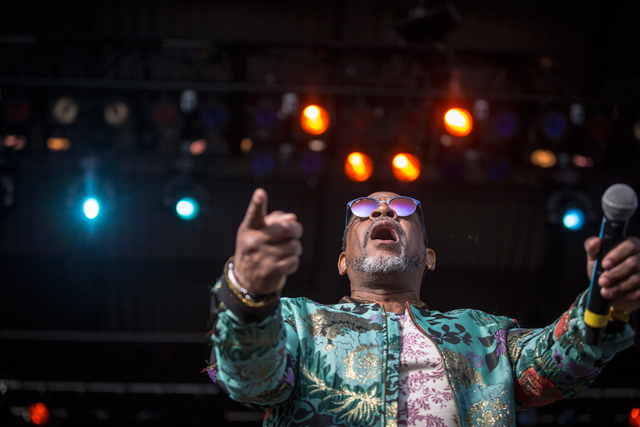 In a refreshing change from many shows by groups touring long after their most recent chart appearances, the Sugarhill Gang's lineup is as original as can be, with Master Gee (aka Guy O'Brien) and Wonder Mike (Michael Wright) both on hand. Alas, Big Bank Hank (Henry Jackson) died of cancer in 2014. He's replaced by Hen Dogg (Henry Williams) and T. Dynasty, who have been performing with the Gang for two decades now. 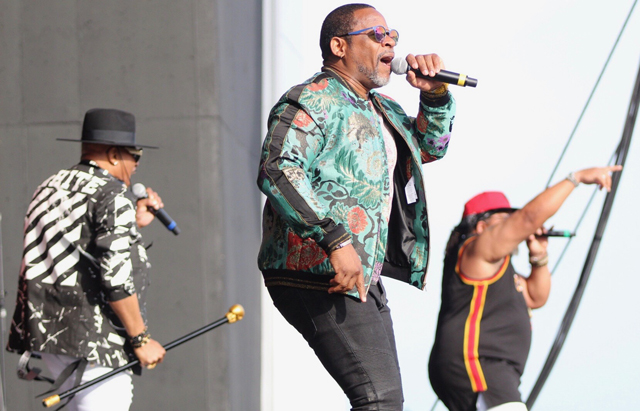 Despite the fact that Sugarhill Gang had other hits among devoted hip-hop fans (think "8th Wonder" and "Apache," especially), as well as further success overseas, American audiences think of one thing when they hear the name Sugarhill Gang, and that's the infectious, by now fully ingrained in the pop canon classic, "Rapper's Delight."

As expected, the crowd – which was pretty big for a 6 p.m. show – would have to wait.

First, local veteran DJ Doctor B warmed up the crowd with a great mix of tunes by Parliament, James Brown, Eric B & Rakim and others, on which he could display his formidable turntable skills.

At about 10 minutes after the scheduled 6 p.m. start time, Sugarhill Gang hit the stage and the music didn't stop for another 90 minutes. The show was uptempo and laden with hits, but if fans were looking for a rock and roll-style concert, they would have been sorely disappointed. Instead, the performance was more like the kind of house parties and Jamaican dancehall sessions upon which hip-hop was built.

First Sugarhill Gang performed "8th Wonder," "Lala Song" and a new one, before Grandmaster Melle Mel and Scorpio – both members of the groundbreaking Grandmaster Flash and the Furious Five – joined them onstage.

Later, the Gang would ease off stage and Mel and Scorpio kept going, tapping into "Beat Street Breakdown," "The Message" and "White Lines."

Then, Sugarhill Gang came back out and the entire entourage performed Sugarhill's classic "Apache" and, of course, "Rapper's Delight."

But rarely was a song performed in its entirety and it wasn't until "The Message" – about halfway through the night – that a single verse from any song was really aired. Instead, a familiar chorus would spark a sing-along, and then a snippet of another song – DMX's "Party Up," The 45 King's "900 Number," Run-DMC's "Walk This Way" – would pop up before the performers would exhort the crowd anew to throw their hands in the air, and then reprise the familiar chorus.

Despite having had a long run as a devotee of hip-hop, especially during its earlier years, I'm not sure I've ever thrown my hands in the air more, nor waved them like I just don't care more. I've never said "ho" more, nor "ho ho," and certainly I've never been urged to scream more.

And that was perfectly fine. Perfectly perfect, in fact, because this wasn't a rock and roll concert. It was a foundational hip-hop party that just happened to take place on a stage on a gorgeous Milwaukee summer night.

Melle Mel – who broke briefly into his famous "Chaka Khan" rap from the singer's 1984 hit, "I Feel For You," the delight of the crowd – looked like he's been training for the body building circuit, and everyone, to a man, was animated and kept the party moving.

This was good-time music for the most part, not the kind of hard-edged material we've come to expect from hip-hop in the years since (though surely Melle Mel helped spark that direction, even if unwittingly, with his no holds barred lyrics on songs like "The Message," "New York, New York," "White Lines" and "Beat Street Breakdown").

"We have not talked about shooting or killing anyone tonight," said Wonder Mike as the show wound down. "We don’t care what color you are. We ain’t said one curse word here. It’s all one love."

Oddly, the show didn't end with "Rapper's Delight," as you might expect. Instead, the rappers all remained onstage and launched into a medley of hip-hop hits – "It's Like That," "The Breaks," "It Takes Two," "O.P.P." – and then, inexplicably, pop songs like "Sweet Dreams (Are Made of This)," "Tom's Diner," "Livin' On A Prayer," "Play That Funky Music White Boy," "Na Na Na Na Hey Hey."

Then, after everyone else left the stage, Melle Mel stayed behind to sing a bit of "We Are The Champions." Not that anyone seemed to mind, of course, but to my mind, closing with the celebratory "Rapper's Delight" would made for a much more powerful end to a fun and rousing evening of classic rap.