Bringing on a Summerfest band: an oral history

It's a long-standing tradition at Summerfest - and at plenty of other festivals - to use radio station DJs to introduce a headlining band. It may seem like a five-minute formality, but as usual, there's a back story to most of what the public sees while standing on the Summerfest bleachers.

The OnMilwaukee.com Summer Festivals Guide is presented by Pick ’n Save, Where Wisconsin Saves on Groceries. Pick ’n Save is Wisconsin proud, and excited to help promote and feed the great Milwaukee summer that includes festivals and fun nearly every day. Click to save here!

It’s a long-standing tradition at Summerfest – and at plenty of other festivals – to use radio station DJs to introduce a headlining band before they play.

It may seem like a five minute formality, but as usual, there’s a back story to most of what the public sees while standing on the Summerfest bleachers.

For this Summerfest oral history, we spoke to four current and former Milwaukee radio personalities: Jon Adler is the morning host at FM 102.1, while Brian Kramp is his former radio partner (and current correspondent at FOX6’s "Studio A." Steve Palec is still on the radio with WKLH’s "Rock and Roll Roots," but his radio career spans decades. And David Lee is a former 93 WQFM jock but is now the baritone imaging voice of Westwood One and many other radio tags you’d know if you heard.

Each offers their own perspective – and sometimes never before told stories – from Big Gigs of yore. Here are their tales of bringing on the bands at Summerfest.

Jon Adler: At Summerfest 2010, I got to introduce Public Enemy who were playing our (US Cell/Leinenkugels/FM 102/1) stage. It was a big deal for me because I've been a fan of theirs since high school. Chuck D was sitting down looking at/writing out PE's setlist when I asked him if it was cool to sit next to him. I sat and we talked about their current tour and if it was cool if I brought them on stage, and if there's anything specific he wants me to mention. He said it would be fine (the stage manager had already told me which mic to use on stage), then less than one minute later from behind a large curtain that separates the backstage area from the stage a voice rings out "Whaaaaaat's up Milwauuuuuuuukeeeeee!" and Flavor Flav appears FROM inside the curtain with a wireless mic in hand! Chuck D and I look at each other, he shrugs his shoulders and says "I guess he's doing it?" He gets up and proceeds to the stage to the delight of multiple generations of fans! 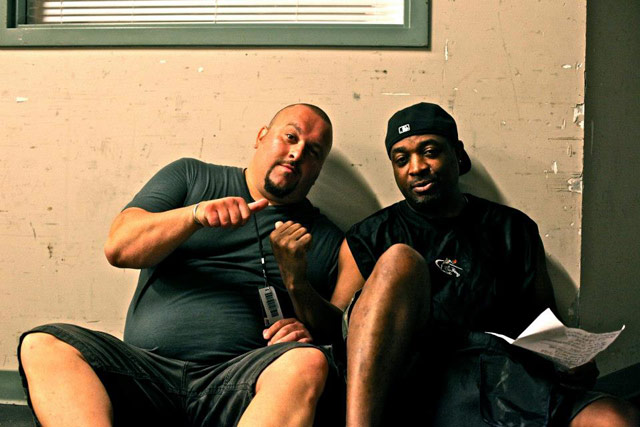 Steve Palec: I can’t even remember how many shows I have introduced at Summerfest. The one that sticks out for me was one of those combination nostalgic shows with Dave Mason, Colin Hay form Men At Work, Ambrosia and Gary Wright … who didn’t show up.

David Lee: In the mid to late '80's 93 WQFM would broadcast the headline acts from their rock stage live on the air. They would also record the shows back at the station in case they could pull out an exclusive live version of one of the band’s hits. Although I don't remember what group it was I remember it was 1987 (perhaps Cheap Trick). I remember listening back to the tape the next day to make sure I sounded coherent because I had downed a lot of the free backstage beer before I went on stage. I was in high energy baptist preacher mode, and luckily no slurring whatsoever.

Brian Kramp: My favorite introduction was when Cypress Hill played in 2010. I fulfilled a dream of hanging out with one of my favorite groups. There was such a thick cloud of smoke on and off stage that I could barely see the crowd when bringing them on.

Palec: The just barely underage guest I took with me proceeded to hit up the free bar backstage every time I went on stage to introduce another act. And when I introduced Colin I made a reference to Foster’s beer, which caused him to laugh uncontrollably. At first I was pretty proud of myself. Then when he wouldn’t stop it got downright awkward. Then when he still didn’t stop I realized it probably had nothing to do with my wit. 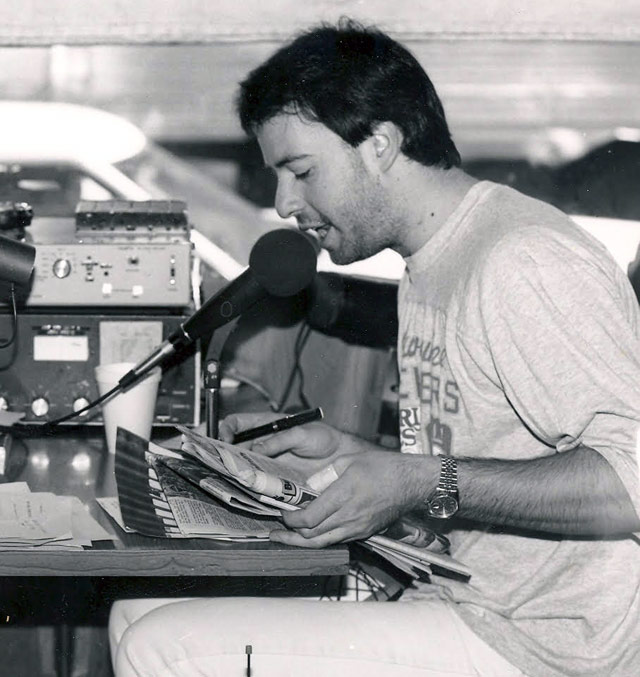 Steve Palec in his QFM days.

Lee: In the early '80s they were a lot wilder because beers were only 75 cents, but still not as wild as the early '70s with the 1973 Humble Pie riot. The next year suddenly acts like John Denver and Seals & Crofts were all the rage at Summerfest, as hard rock was pretty much banned for a few years.

Palec: Things were very crazy. Back in my WQFM days we broadcast live from the fest 24/7. I was doing overnights and usually was on the grounds by myself from about 2 a.m. to 5:45 a.m.

Lee: The big difference now is the security when you enter the grounds. Back then you were not treated like a criminal, you just walked in with your ticket. 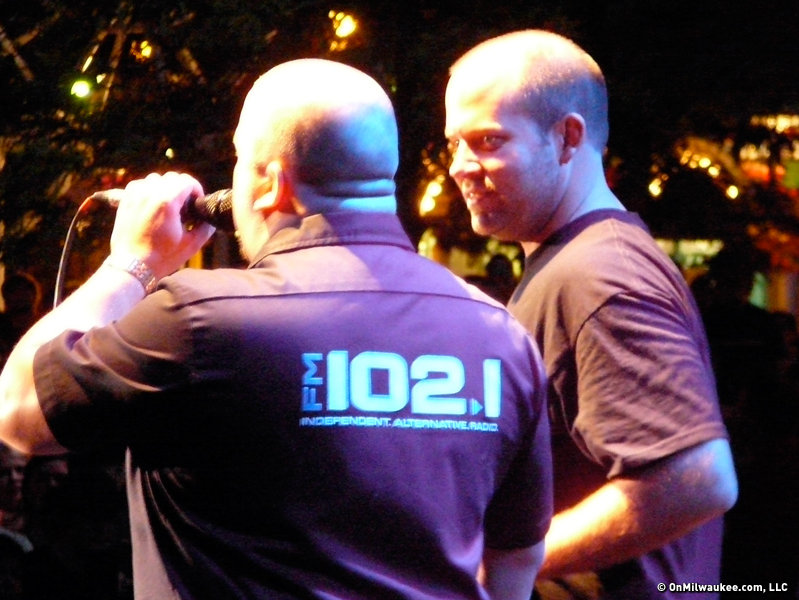 Kramp: Yes, the backstage area was way more crazy. In the late ’90s there was always a party happening before, during and after the headliners performed. Sometimes it would go until 3 a.m. Unfortunately today you’ll probably never see random people drinking Heineken and starting chainsaws backstage like they were at the Jesse James Dupree of Jackyl show in 2000.

Lee: Yes, because it was the ’80’s, the height of rock & roll decadence. Kids listen to mostly hip-hop, pop and country these days, but back then rock still ruled. Hip-hop was brand new, and country was considered totally uncool in those days (probably because it wasn't just pop/rock with a twangy accent and a cowboy hat like today).

Kramp: On July 4, 2002, the backstage area for Tommy Lee of Motley Crue was riddled with scantily clad females, and the majority of people backstage were heavily intoxicated. There were a lot of people randomly making out with strangers, but then again that was normal for a Tommy Lee show back then and still may be today.

Kramp: There were no scripts, and the only time I got nervous was when I was on stage with Adler because he was like a human target for beer cups and bottles! Most of the time, when you introduce a headliner it’s difficult to see any further than the first five rows because the lights on stage are so bright … so nerves were never an issue.

Palec: I was not nervous. But I am always reminded of the Albert Brooks standup routine about DJs missing that part of the ear workings that allows you to notice everyone booing you … and the ability to continue talking.
I was more embarrassed.

Lee: Not nervous at all, although the free backstage beer at the QFM rock stage didn't hurt the inhibitions. I did not script my remarks. I would usually start out with a generic "Are you ready to rock, Summerfest?" type comment and then just feed off the crowd with some ad libs leading into the big high energy adrenaline infused, "PLEASE WELCOME…" 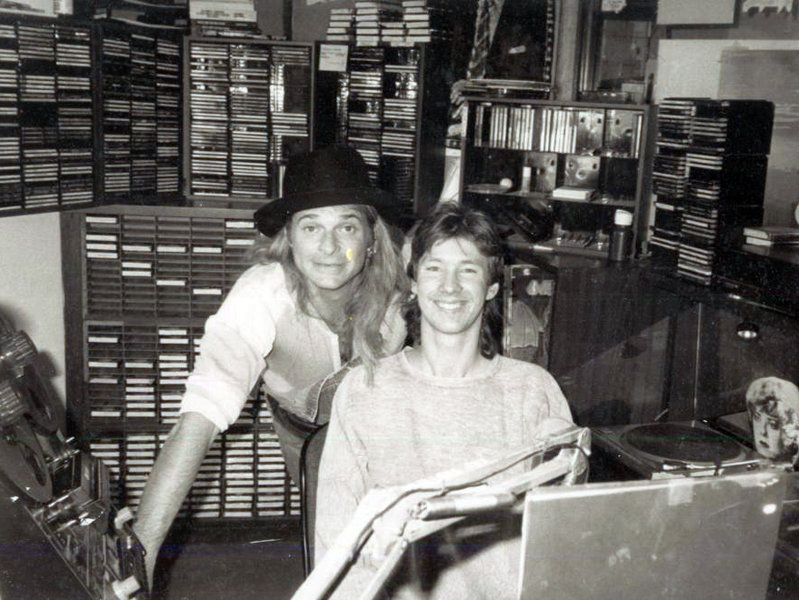 David Lee with David Lee Roth at the WQFM studio.

Adler: Crowds don't bother me. Unlike a break during the morning show where you ideally have some idea of what you're going to say, I don't really like scripting what I'm going to say for band intros. 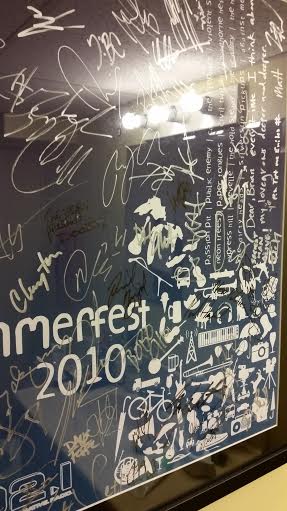 Lee: I started at 10 a.m. live from Summerfest which meant in my first two hours, only the clean up crew, the vendors getting set up, and a bunch of seagulls were there for moral support.

Adler: Yes, you plan as best as you can (naps).

Kramp: It altered the sleep schedule a bit, but it was part of your job as a radio DJ. If I had to get up early the next morning I wouldn’t have any alcohol and depending on the band I would leave immediately following the introduction, but if it was a Friday or Saturday night … well, that’s another story.

Lee: I enjoyed it and I think most radio personalities do because we tend to want to let our inner rock star loose.

Kramp: I enjoyed introducing the headlining bands because it gave me a chance to be out in front of a crowd of listeners, or potential listeners, and back then that was considered media being social.

Adler: I love doing them! Who doesn't want to walk out to throngs of people going crazy, even if it's not for you?

Kramp: I think the first solo stage announcement I did was for Jimmie’s Chicken Shack in 2001 and the last one was for Bush in 2012. Maybe someday I’ll get a chance to do some more!